When MPs would only talk about corruption ‘privately’ 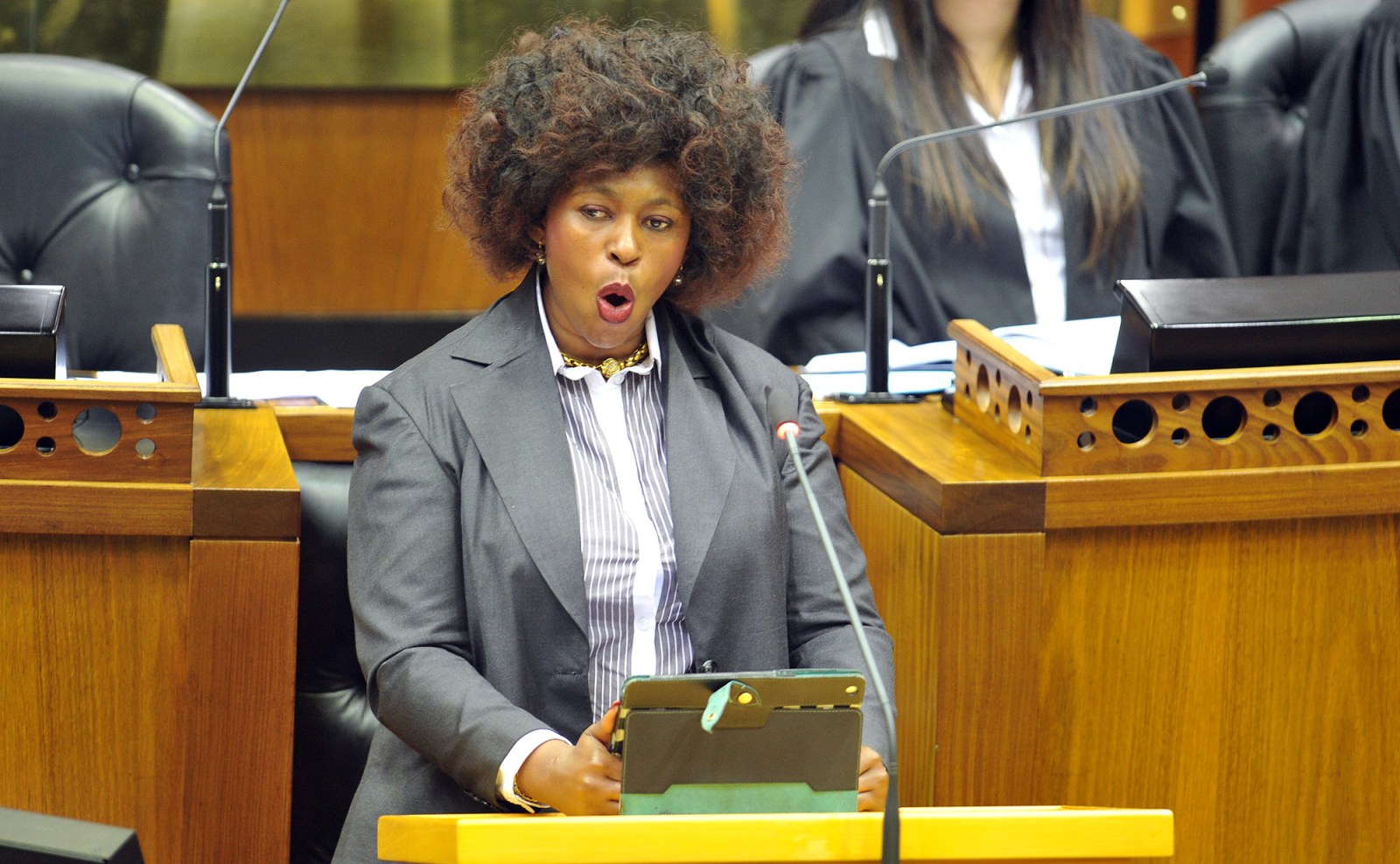 Ad hoc Committee Chairwoman Dr. Makhosi Khoza speaks during the National Assembly debate on September 07, 2016 in Cape Town, South Africa. Amongst other things discussed was the appointment of the new public protector, of which advocate Busisiwe Mkhwebaneís name has been put forward. (Photo by Gallo Images / Beeld / Lulama Zenzile)

Why didn’t Parliament tackle corruption claims? The Zondo Commission was told it had to do with politics, factions in the ANC, and the executive’s attitude.

The debilitating impact of politics on constitutional democratic institutions came into sharp focus at the State Capture Commission – as former president Jacob Zuma played his own brand of politics to avoid answering commission questions.

Zuma again styled himself as victim, saying on Monday he would not obey with the Commission’s subpoena to appear from 15 February and the Constitutional Court order to do so.

On Tuesday, the Commission announced it had laid criminal charges over Zuma’s failure to testify before it from 18 January, and further steps could follow, depending on what happens later this month.

In his statement, Zuma argued he was being targeted by the Commission in parallels “too similar to ignore” to the apartheid parliament’s annual extension of the imprisonment of Pan-Africanist Congress (PAC) leader Robert Sobukwe.

But he’s not the first to make such comparisons. Public Protector Busisiwe Mkhwebane, in legally challenging Parliament’s impeachment inquiry, also invoked the so-called Sobukwe Clause – the May 1963 General Law Amendment Act used annually to renew Sobukwe’s solitary confinement on Robben Island, until May 1969, when he was banished to Galeshewe, Kimberley.

It went down like a lead balloon in the August 2020 court hearing. “It’s bizarre that in this constitutional democracy you would argue Parliament would institute a Sobukwe Clause,” Judge Vincent Saldanha told the Public Protector’s advocate, Dali Mpofu, who backtracked to say it was not Parliament he meant but the Democratic Alliance.

In late 1997, Botha decided not to comply with summonses by the Truth and Reconciliation Commission (TRC), which he described as a “witch hunt” against Afrikaners.

Botha was meant to answer to extrajudicial killings and human rights abuses, but also the apartheid government’s chemical warfare programme and State Security Council. He denied any involvement.

On 9 January 1998, Botha, then 82, was charged under the Criminal Procedures Act for defying the TRC subpoena. Then Western Cape Attorney-General Frank Khan told a media briefing, according to newswire service Sapa, that “no attorney-general in any civilised country lightly decides to prosecute a person of his age, especially given Mr Botha’s medical history”, but the TRC’s questions to  Botha warranted such a prosecution in law and in the public interest.

Botha’s first appearance in the George Regional Court on 23 January 1998 was a sight as the ex-president arrived from his nearby Wilderness home accompanied by a specialised police detail, as police watched over both Botha supporters and protesters against him.

Speaking to the media afterwards, Botha called on Afrikaners to unite, and railed against the “revolutionary communist onslaught” and how “it would seem as if these violent deeds are presently conveniently being ignored and forgotten by the TRC, and some politicians”.

On 21 August 1998, Botha was found guilty for flouting the TRC subpoena, and was sentenced to a year in jail, or a R10,000 fine, with another year’s jail suspended for five years. Botha appealed, successfully, by 1999.

In a historical twist of irony, the eight-month court case ended just past the TRC deadline to investigate human rights abuses. But TRC deputy chairperson Alex Boraine, according to Sapa, said Botha’s trial had demonstrated “in a concrete way that we now have a society in which no one is above the law”.

Roll forward to 2021 and the State Capture Commission. On 1 February, Zuma, in the statement in which he raised the Sobukwe Clause, announced he would not co-operate with the commission.

“In all the years of struggle, I had never imagined that there would come a time when a democratic government in South Africa built on constitutional values would behave exactly like the apartheid government in creating legal processes designed to target specific individuals in society.”

On 2 February, the State Capture Commission said it had laid criminal charges against Zuma for flouting its January subpoena, followed by further action if the ex-president indeed failed to honour the Constitutional Court order to appear before it.

“It seems that Mr Zuma considers himself to be above the law and the Constitution. The Commission reiterates that in terms of the Constitution everyone is equal before the law. This constitutional guarantee must be given effect to,” said Commission Secretary Itumeleng Mosala in a statement.

Commission chairperson Deputy Chief Justice Raymond Zondo asked several witnesses fundamentally the same question, even if it was phrased differently: Why, if all these claims of State Capture and serious corruption were in the public domain for years, did MPs not pursue these?

The responses coalesced around politics, internal factional fissures in Parliament’s majority party, the ANC, and the attitude of the executive.

The former chairperson of Parliament’s public spending watchdog, the Standing Committee on Public Accounts (Scopa), Themba Godi, on Monday said oversight by the national legislature was fundamentally a political matter.

“In a system where one political party dominates, the extent to which oversight will be effective depends on the internal dynamics of that party.”

But it was testimony from former ANC MPs Zukiswa Rantho and Makhosi Khoza that shone a spotlight on those governing party parliamentary caucus dynamics. And, in doing so, it gave the State Capture Commission crucial insights regarding parliamentary oversight.

When Parliament in 2017 asked four committees to probe the #Guptaleak claims, only the public enterprises committee proceeded with a full inquiry.

On Tuesday Rantho, who chaired the Eskom State Capture inquiry, told Zondo “it was a great risk we were taking as there was a divided caucus…”

Between 2009 and 2014 State Capture was only privately and informally discussed by ANC MPs; it didn’t make the official ANC parliamentary caucus agenda.

That this inquiry got off the ground and continued, despite threats against Rantho, showed a shifting line in the sand of the ANC parliamentary caucus. Some nine months earlier, on 8 September 2016, the ANC had used its numbers to defeat an opposition-supported motion calling for State Capture investigations.

“How much of the billions of rand allegedly looted by the Guptas and their associates would have been saved had your [Rantho’s] committee and had the National Assembly acted a year earlier…[?]” asked Zondo, who earlier expressed concern MPs didn’t act on State Capture and serious corruption claims in the public domain as far back as 2011.

By Thursday Zondo got some answers on transparency and the ANC parliamentary caucus’s pliancy. “There was a view when the opposition is raising [it], even if it was correct, you have to oppose it. My view was not that…” testified Khoza, adding later, “The ANC is failing to transition from a liberation movement that is underground, that is marked by a culture of secrecy…”

For her outspokenness she was ultimately  hauled before disciplinary proceedings in late 2017. She helped form a political party, but joined Action SA in late 2020.

Zondo, who said the ANC would present its perspectives to the Commission, later returned to an emerging thread in the hearings on parliamentary oversight:

“If the ruling party was really intolerant of corruption and wanted proper oversight done by members of Parliament, effective oversight, Parliament could have stopped a lot of things that happened that were wrong.” DM168