The vulnerable suffer as grant recipients are thrown into admin hell 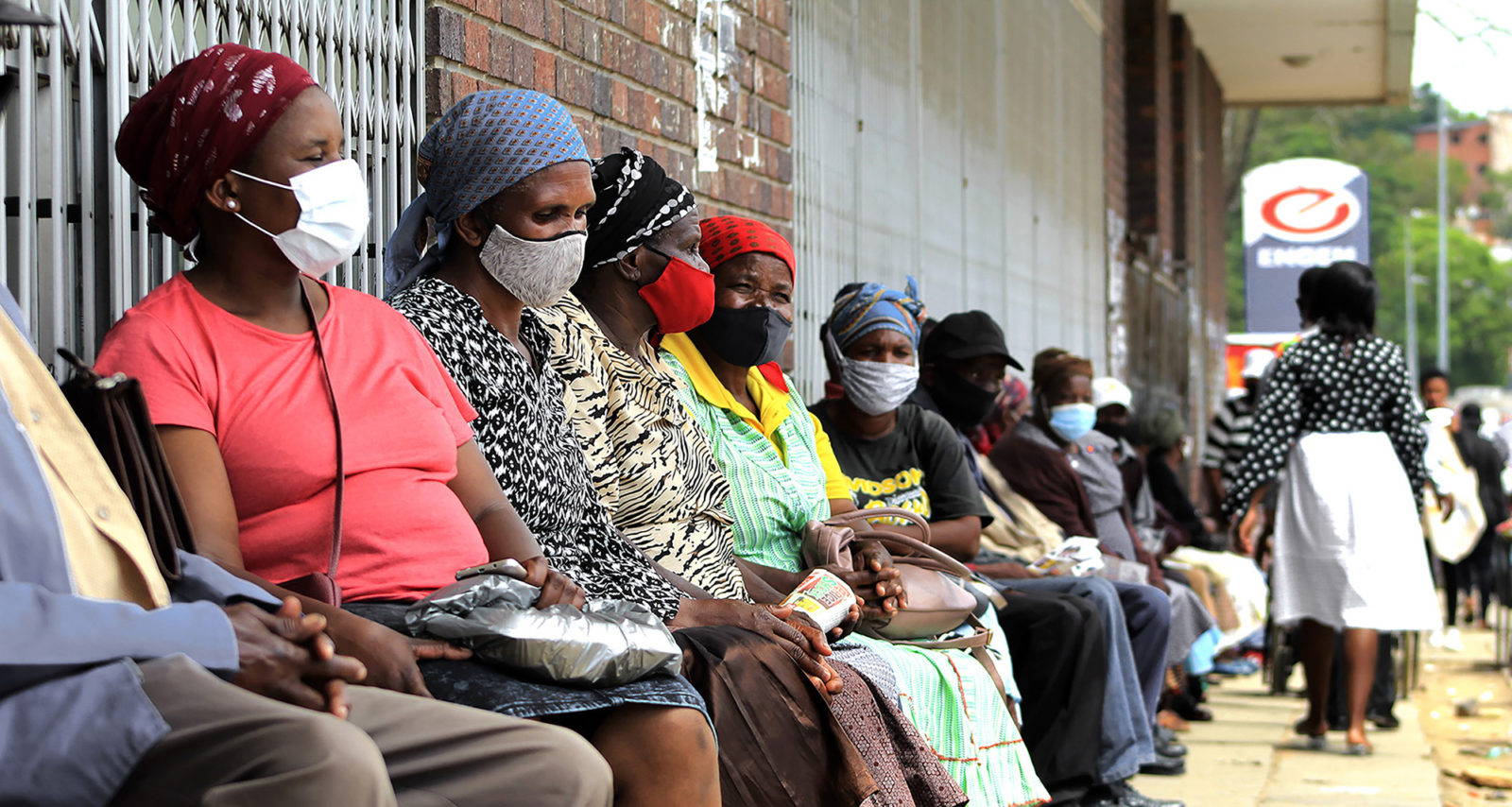 Grannies outside the Post Office in Mthatha waiting for their grants. (Photo: Hoseya Jubase)

Many families are caught between the devil and the deep blue sea as Sassa grants are cancelled because of Home Affairs’ Covid-19 delays and inefficiency, leaving them without income.

Grandmothers and mothers suffered the brunt of severely restricted services at the Department of Home Affairs  (DHA) as the South African Social Security Agency (Sassa) cancelled grants for children who had not been issued with a birth certificate after three months this December. Following an intervention by the Legal Resources Centre and the Children’s Institute at the University of Cape Town, the grants were expected to be reinstated and paid on Friday, but many families were left without a cent in January as children further bore the brunt of school feeding schemes being closed.

Caught between restricted services and long waiting times at the DHA and a decision by Sassa to stop all grants for children without birth certificates after three months, grannies and moms from Mthatha to Johannesburg were left without any money in January. Even those who desperately sought help before the cancellation were sent from pillar to post and back again.

Although Sassa has agreed to continue child support grants until the State of Disaster is lifted (the current expected date is 15 February), the Children’s Institute has argued they should continue until the end of 2021, when the DHA will be expected to be back at full operational strength.

Paula Proudlock from the Children’s Institute said that, after the DHA’s services were restricted because of the Covid-19 outbreak in the country, no applications for the delayed birth certificates were processed. She added that they were also struggling with social workers who are failing to apply for delayed birth certificates for orphaned and abandoned babies. In the past week, she said, the DHA did agree to do one of the clients’ applications.

“Since 2018, the Legal Resources Centre and the Children’s Institute have been documenting evidence that shows that in most cases clients are punished for the failures or incompetence of other state organs such as the provincial Department of Social Development and the DHA,” she said.

“[Many] cases illustrate contemptuous conduct from the DHA and Sassa officials at the expense of poor clients who cannot afford to continue to travel to the offices only to be told there is no progress.”

As a result of the decision to cancel child support grants for undocumented children, many families were left without any grants for January, and children could also not get their school feeding meals, because the opening of schools was delayed.

“The burden of obtaining documents from the DHA falls disproportionately on the children, their parents and their caregivers, who are unable to control the DHA’s internal processes or the lack of response from social workers,” said Cecile van Schalkwyk, an attorney at the Legal Resources Centre, who had been assisting the Children’s Institute.

Although the Children’s Institute said it does not know yet how many families have been affected by the decision, it is representing 72 clients and there were 16 000 children without birth certificates who received the grant late last year.

“We do not know how many have lapsed,” said Proudlock. She said many of their families would try to collect their grants on Friday. They could only hope that they have been reinstated.

Despite numerous requests, Sassa did not respond to any questions this week.

“For many families the grant money, R450 per child, is their only source of income,” said Mbonisi Nyathi of the Children’s Institute. “Our clients are very distraught.”

He said they had had grandmothers and moms approach them from Mthatha to the Western Cape to Johannesburg.

“One of the grannies in Mthatha this week first stood in the line at the Post Office. Then she went to Sassa and then she even went to the bank, who told her there was no money in her account. That is how desperate she was,” Nyathi said. Grandmothers were allowed to start collecting grants earlier this week.

Proudlock said the grants for children without birth certificates should be extended to the end of 2021, because departments such as Sassa and the DHA will probably only be back to full capacity by then.

In one case the grants of a grandmother who looks after two children were stopped despite the fact that she had submitted an acknowledgement from the DHA for the late registration of the children’s birth.

She was told by the DHA to wait for a call to be interviewed.

Sassa stopped her grants, but after intervention by the Children’s Institute it turned out that this was a mistake. The grandmother was assured that the problem would be fixed. Sassa sent her back to the DHA for another letter. The DHA said the manager was on leave and could not issue a letter. Another arrived for a scheduled interview for a birth certificate only to be told that the official who must do the interview had not arrived at work.

Another of the cases presented to Sassa involved a woman whose own birth was not registered because she was born to a teenage mom who did not yet have an ID. She tried to apply for her own birth certificate in 2016 but has still not received it. Her payments for her three children were stopped in 2020. Others were told they could only apply for one child per day.

“This has a serious impact on these children and their caregivers, who rely on the grants to be able to feed and clothe the children and provide for their basic needs. The situation is further exacerbated by the Covid-19 pandemic that has seen an enormous increase in people attending Sassa offices, where the rules around physical distancing result in longer queues and reduced levels of services. This means that many of these caregivers cannot even access a Sassa office to enquire about the lapsing of the grant or apply for the grant to be reinstated. Those who persevere are spending many days standing in long queues and travelling in crowded taxis in the hope they can get to the front of the queue,” Proudlock said.

“The lapsing of any of the regulation 11(1) grants at this time is a serious infringement of the children’s right to social assistance and basic nutrition under the Constitution,” Van Schalkwyk added. DM168