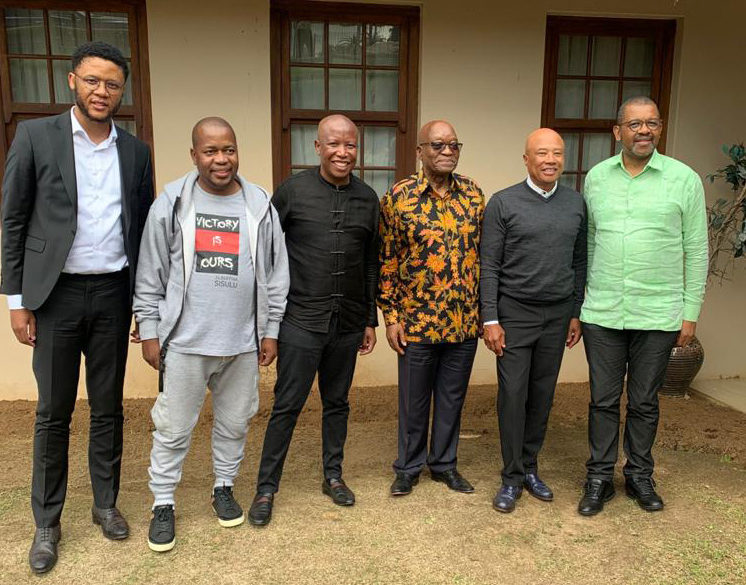 A tea party between Jacob Zuma and Julius Malema, which had its genesis over a much-publicised Twitter invitation, caused a good deal of distraction on Friday.

President Cyril Ramaphosa on Friday made light of intense speculation that a “tea party” between former president Jacob Zuma and EFF leader Julius Malema may have been intended to plot his downfall.

“Anyone is entitled to have tea with anyone,” he told journalists in Soweto.

In his characteristic monotone, Ramaphosa chose to rather answer journalists’ questions slightly more comprehensively about the former president refusing to appear before the Zondo commission and, in so doing, defying a Constitutional Court order compelling him to do so.

Zuma is again set to appear before the commission from 15 to 19 February, but has issued a statement that he will not do so, claiming the commission has a clear bias.

“He has expressed his own thoughts and views that he does not want to go to the commission. But I am sure that this is a matter that is going to be much more thought through, because he is being counselled by a number of people and a number of organisations, that the constitutional structure that he contributed so much to, needs to be given consideration to, and I am sure that in his own mind, and in his own time, he will think about all of this.

“And I would like to say, let’s give former president Jacob Zuma time and space to think about this, and also to hear what other people are saying,” Ramaphosa told reporters in Soweto during a visit to the family of anti-apartheid activist Rebecca Kotane, who died on 31 January.

The president said that suspending Zuma from the ANC was yet to be considered.

“I think those who are saying [that Zuma should be suspended] are speaking for themselves. That is not something that is a consideration right now. I think all of us need time to reflect and think about this. And in life, it is always best to think about matters carefully and deeply before you come to any rushed conclusions.”

Meanwhile, in Nkandla, Malema met Zuma at his homestead on Friday afternoon. Malema arrived via helicopter just before 1pm, landing on the Nkandla helipad. He hopped into a vehicle and drove through Nkandla’s famous gates.

The EFF leader was joined by his party’s former chairman, advocate Dali Mpofu (his “plus one”). Also at the get-together were party spokesperson Vuyani Pambo and Ekurhuleni mayor Mzwandile Masina – who deleted Ramaphosa from his Christmas card list a while ago.

The “tea party”  has caused much hype and speculation among commentators and the media.

According to some political pundits, the “tea” between Malema and the former “Teflon President” is nothing more than political theatre engineered to raise the hairs on Ramaphosa’s neck. But it could also have been a way for Malema to regain relevance by encouraging Zuma to attend the commission, even though he has stated it is biased.

Days before the “tea party”, one of Zuma’s trusted staff members, Vukile Mathabela, posted to Facebook videos of ANC secretary-general Ace Magashule being door-stopped by journalists. Magashule was asked about Zuma defying the apex court’s order that he should appear before the Zondo commission.

More than 30 witnesses at the commission have implicated Zuma in wrongdoing.

When asked if the ANC would listen to calls to suspend Zuma for his defying of the court order, Magashule replied: “No, why, why should we do that?… President Zuma has a right to do whatever he wants to do. Don’t make me talk on behalf of President Zuma, we have not discussed this matter.”

On Mathabela’s Facebook timeline, one (presumably) Nkandla resident wrote in isiZulu that community members wanted to watch the spectacle live, and join in with their tea. To this was attached a photo of a smiling Zuma and a beaming Malema cutting cake.

The tea party had its roots in Twitter. Malema tweeted to Zuma on February 3: “Can we please have tea urgently?”

To which Zuma replied: “Thobela Moshabi (loosely translated: ‘How are you, stranger?). I have seen your request to share a cup of tea. As you know, Nkandla village is home for me and that is where my time is spent these days. Tea I have plenty of, you are more than welcome to come over for a cup.”

To which Malema replied: “Thank you Baba, I will make a plan to arrive, possibly this weekend. I will take it further with your young man [Ekurhuleni mayor] @mzwandileMasina for final details. Thank you for accepting my request promptly. It is in the best interest of our country.”

In the build-up to the meeting, a group of ANC stalwarts and veterans released a statement on Friday calling Zuma’s decision to defy the ConCourt ruling “a brazen and shameful act” and “the height of arrogance for one who once served the country as president and still receives perks from the taxpayer”.

On Thursday, the South African Council of Churches said that Zuma was using Zondo as a scapegoat to avoid testifying. “Any South African acting like this would face serious consequences,” it said.

After the tea party meeting was over at Nkandla, with journalists waiting outside with bated breath for the inside scoop on what had transpired,  EFF spokesperson Vuyani Pambo had only this to say, repeatedly: “The meeting went very well … the tea was nice and sweet .. and very hot … it was a tea party … there was no agenda.” DM