The Fame of the Rose

The Fame of the Rose 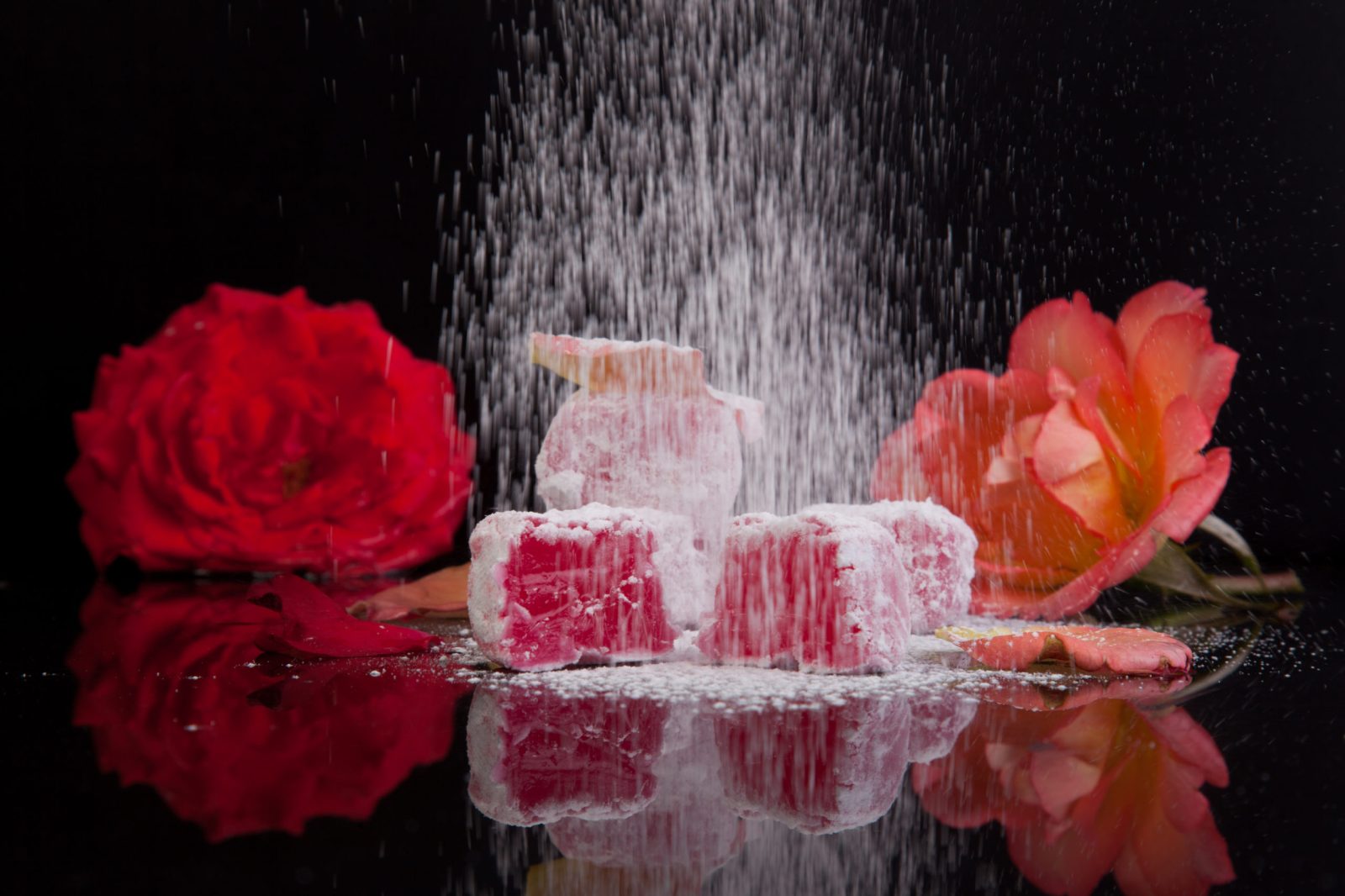 Turkish Delight made by the author, offset by roses from his garden. (Photo: Louis Pieterse, Kudu Studio)

In the garden, in the vase or in the kitchen, the rose always holds your attention. But you can cook with it too.

For the poet Robbie Burns, “Luve” was like a red, red rose. DH Lawrence’s lover’s breasts, as he watched her in the morning, swayed “like full-blown yellow Gloire de Dijon roses”. But for Dorothy Parker there had to be a twist, just as any rose contains at least one thorn, as in her poem One Perfect Rose…

A single flow’r he sent me since we met

All tenderly his messenger he chose;

But, two stanzas on…

Why is it no one ever sent me yet

One perfect limousine, do you suppose?

Oh no, it’s always just my luck to get

That which we call a rose, by any other name would smell as sweet, wrote Shakespeare in the most famous line about roses other than the Burns’ song (his Red Red Rose was strictly speaking a song, not a poem), usually followed or preceded when quoted or in magazine headlines by “What’s in a name?” The Italian novelist Umberto Ecco may have the answer. In naming his novel The Name of the Rose, he wrote in a postscript to the published work, he chose it because “the rose is a symbolic figure so rich in meanings that by now it hardly has any meaning left”. The book’s title has remained a mystery ever since, intentionally so, and that’s fitting for anyone who appreciates the mysteries of this monarch of all flowers.

The rose is the ultimate symbol of beauty in nature, yet also symbolises war; it makes the heart race faster, is the colour of love and lust, yet it stings and will hurt you and draw blood. And the blood drawn by the thorn is said to be what coloured the ultimate hue of the rose: red. The Greek geographer and traveller Pausanias wrote that when Aphrodite cut herself on a thorn the blood stained the white flower red, mythical evidence that the rose at once represents beauty and pain, serenity and cruelty.

The blood drawn by the thorn even gives the rose one of the names it is most often called by: blood red. Of all flowers, and their numbers are countless, the rose is surely the most inspirational, to the lover, to the poet, the painter, the designer, the filmmaker, or the stressed or grieving human who, seeking solace in his plight, flees into the arms of nature and finds it in the sighting of a rose with its unfurling petals, its vivacious curves, its promise that within its folds is an eternity of healing to the stricken heart, a salve of succour to the blighted human spirit. You can get quite lost inside a rose, if you have the eyes to see while its fragrance envelops your soul.

Yet the most beautiful and sought-after things in life are often contradictory; and for every rose there is a thorn. Often the roses on a particular bush are greatly outnumbered by the thorns that stab you as you reach for the bloom, as if they’ve been placed there to thwart you, to protect the flower from your predations; thorns are the Keep off the Grass sign in the world of roses, there to see you off.

Even in decay and death the rose retains its beauty. Those who eschew the wilting rose as its reds or oranges fade to yellows and browns and dismiss it as merely “dead” are missing its final phase of beauty; just as humans so often do not appreciate the beauty that remains in a woman or man who has lived a long life and, though grey and not as perfectly shaped as in their youth, display another kind of beauty in their wisdom and what they hold in their eyes. If we have the eyes to see it, the dying rose is worth leaving on the branch, or in the vase, while it fades away and finally disappears into the places where all roses go when they die.

Consider the artist painting faded, wrinkled rose petals strewn on the floor below a maiden’s feet in an oil painting; the artist’s eye saw them first, and did not think, ah, I will cast these dead petals away and only use petals fresh from the bloom. Nurture the old, treasure the fading; they haven’t left us just yet.

Wars are fought over roses or by its name. The red rose of the House of Lancaster and the white rose of York, the 15th century clans who, with standard held aloft, fought so hard and for so long in the Wars of the Roses that the male lines of both houses were destroyed forever; a sobering metaphor for anyone who still believes war is the way to resolve anything. Those wars were immortalised for our times in a more mundane if entertaining way in the 1980s’ black comedy The War of the Roses, in which Kathleen Turner and Michael Douglas do fierce battle as their passionate love is engulfed in hatred, a strangely suitable illustration of just how contrary the symbol of the rose is in life and in art.

In food and drink, the rose plays a role on many fronts, despite it being far from a mainstream ingredient in most cuisines and an afterthought in many. In France you’re most likely to find rose in creams and confectionery, jellies and crystallised petals. All of the obvious things, you might say, French cuisine being so brilliant on so many levels yet less imaginative in others. It falls to their faraway compatriots in Turkey and nearby regions to make the rose a more central part of their national cuisines. The country’s very name is a part of arguably its most famous dish: Turkish Delight. And it is as Turkish as it is delightful: sweet and fragrant, utterly divine, using that word very precisely: it is truly a dish for the Gods, one you would set before the mightiest person in the land with the confidence that you will not be put to the sword, lowly infidel that you may be.

Rose is not always used in the making of baklava, but rose baklava is a wonderful thing, and baklava of course is Turkish too, even though also associated with the cuisines of Greece and Serbia.

Barfi is a milk-based Indian sweet that looks a bit like nougat and is often flavoured with rose. Halva, the West Asian semolina confection which is also popular in North Africa, the Balkans, Middle East, Russia and elsewhere, was made with pistachios perfumed with rosewater in Persia and is now in Iran. How perfect a marriage is that: pistachio and rose. Also from Persia and India is gulkand, a sweet preserve of rose petals.

In India, gulab jamun (sweet, spicy little dough balls a bit like doughnuts) are soaked in a rose-infused syrup, while kanafeh (it has many other names) exists from Turkey to the Levant and beyond, and is often made with shredded phyllo pastry and nuts, steeped in a rose syrup, and even sometimes contains cheese.

Rose water or rose syrup (much, much more intense, deep red in colour and available from Indian food stores) can be used in any number of desserts, from adding that dash of rose flavour to a custard, ice cream, nougat (of course), or a kulfi, the traditional Indian ice cream.

We haven’t even touched, yet, on recipes for rose hips, those little round “accessory fruits” left over once the petals have faded on the plant. Once sun-ripened they are used in jams, jellies and marmalades, and Sweden even has a rose hip soup called nyponsoppa.

Worship the rose in its thorny lair of protected beauty; every one ever picked has been worth every scratch and the blood it’s drawn, whether to infuse its petals in a syrup or to admire it in a long-stemmed vase. DM/TGIFood