The Cry of the Coffee 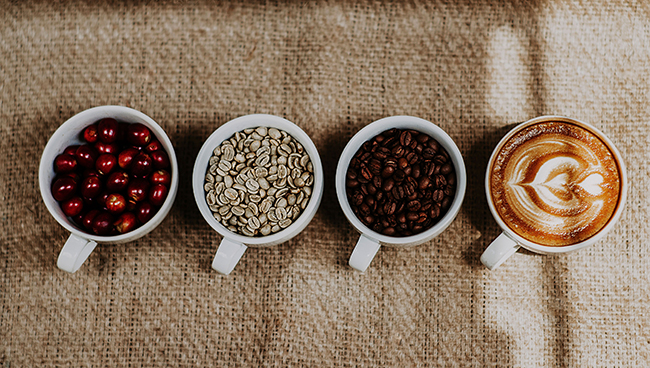 The main myth is that coffee requires altitude. It is useful for the marketing and branding of it to perpetuate the idea that coffee needs to grow on heavenly, cloudy mountains around the world.

Having raced down to Port Edward to a couple of friends’ holiday house, without too much planning, both of us severe coffee addicts, we arrived to find that, even though we’d taken a coffee mill and the coffee itself, there wasn’t any way of making it. The local supermarket had nothing like that though we bought coffee filter papers there, 80 of them. A wild idea of putting them in coffee cups as individual filters fell apart, actually within the coffee cups or within jugs, the filter papers bursting at the bottom seam.

The filters needed to be perfectly upright and supported, as within a coffee machine. After some trials and pretty much the same number of errors, we semi-perfected a real contraption. It involved a saucepan balancing a colander upon it, around which eight pegs supported four wooden spoons which in turn supported a coffee filter with enough coffee grounds to make two cups at a time. Boiling water was carefully poured, not unlike the pour-over system we said hopefully, until the saucepan received enough coffee through the colander holes to drink.

I’d been told by one of the holiday house owners that I might be interested in visiting a local place called Beaver Creek, supposedly the most southern coffee farm in the world. I reckoned it would, primarily, be a good spot for buying a French press/plunger or aeropress or anything similar.

The only other KwaZulu-Natal coffee roaster I knew was Terbodore, originally at Curry’s Post near Howick. They roast rather than grow beans round there and get the latter from Mount Elgon in Uganda, from lofty Ethiopia and South America, Indonesia and so on.

Okalweni began harvesting for the first time last year from but three hectares of premium F6 arabica. For most people, the big surprise is that Okalweni lies a mere 50 km above sea level.

I’ll bet you also wanted to know if Coffee Bay, further south than Beaver Creek, actually grows any coffee. It does, and Beaver Creek gets involved there with some small growers as well as other areas up the coast, like Eshowe.

“And maybe Development,” he smiles. He is dismissive of any “most southern” or other marketing brags. He has spent his years researching, analysing the growing of the coffee, the processing of it and the market and has a formidable coffee library. He knows the history of our coffee, its processes formerly, now and, yes, in the future. It is that of the so-called “super-factory”, which is a whole study for another Daily Maverick section, perhaps. It also ensures healthier rewards for growers, within the new coffee order.

When I look at some notes I made here, I am a little alarmed at a heading, The Cry of the Coffee. The Cry seems to be my short-hand for The Growing but it does halt me for a while, thinking about the desperate farm times, the anguish of the markets and poorly rewarded growers. It even seems to reflect the experience and measures my friend and I have been going through to produce the delicious drink. And the misunderstandings, the myths that Dylan has uncovered.

The main myth is that coffee requires altitude. It is useful for the marketing and branding of it to perpetuate the idea that coffee needs to grow on heavenly cloudy mountains around the world. But, it really helps coffee to be grown at certain latitudes rather than altitudes, Dylan argues. Here at Beaver Creek and especially at Okalweni, the 31 degrees of latitude provide ideal angles of light and warm temperatures just as close to sea level as they are.

More than growth, production counts most, treating the fruit with more care than as for beans, rather seeing them as the seed. It’s part of Dylan’s sober study of the entire business of how the coffee seed is treated and utilised from beginning to end.

To illustrate the treatment, he speaks about the seeming silliness we’d discussed of the kopi luwak coffee devoured and pooped by civets and achieved by what has become a cruel, misunderstood and unnecessary process. I’ve even been to a cross tasting of coffees digested by civets, badgers and also some spat out by rock macaques. I couldn’t remember which was the one deemed “best” tasting. It didn’t even seem to be the point of the exercise.

Before plunger purchase time, we attended a cupping with Dylan at the barista bar and, as with most cuppings, examined the five mystery cups, not to choose a best but to guess the origins, contrast and compare them. I knew there was likely to be a Ugandan among them and had my eye and taste buds trained on the likeliest power displayer. We looked for sweetness, acidity and aftertaste above all and I’d settled on number three being the Ugandan on all three aspects. I got that right but all the others wrong. The Tanzanian surprised me with its acidity and the one I’d assumed was an Ethiopian, often my favourite coffee, was the local Okalweni.

With the French press we took back a pack of the Okalweni “Outlier” and one of a mix of origins, South American, Indonesian and African, both coffees produced and roasted by Beaver Creek.

It’s been a day for the joe, dirt, go-juice or wakey-juice, java or mud. And we taste our now well made coffees in succession, from both packs, trying to be as honest as in the cupping about the aromas and tastes. The blend has that earthiness on the nose with a bitter caramel taste element but the Outlier smells almost wood rotten and has a kind of taste to me, at least, of carrot cake. I look through the official 2017 Lexicon of coffee references. I can find no carrot cake. The closest seems to me to be Brown Spice.

I think I am hearing a clear cry of the coffee. Thankfully, it’s not the civet. DM/TGIFood