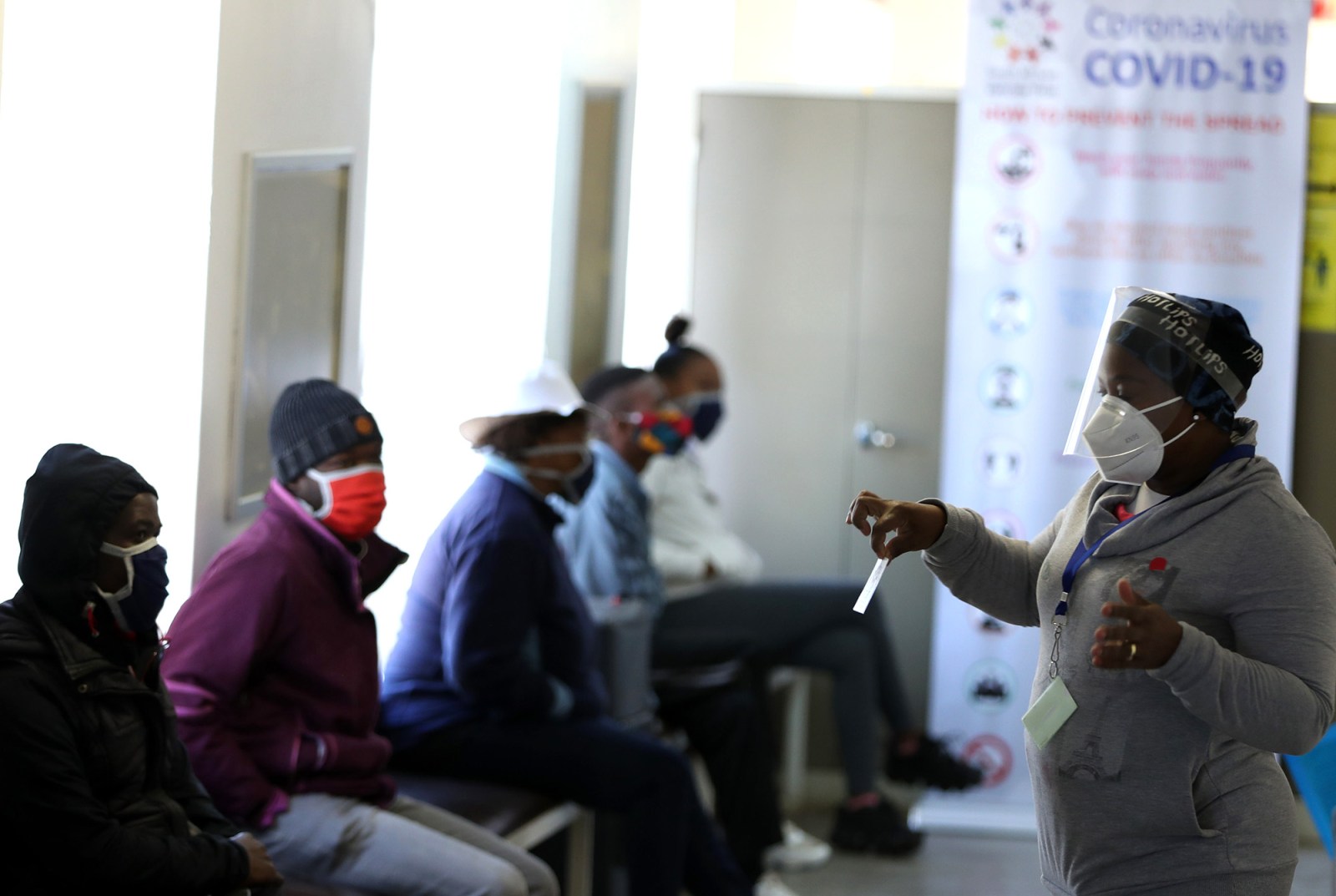 epa08505900 Some of the first South African vaccine trialist wait ahead the clinical trial for a potential vaccine against the Covid-19 Corona virus at the Baragwanath hospital in Soweto, South Africa, 24 June 2020. 2000 South African volunteers are set to be given the Wits and Oxford Universities vaccine for COVID-19 over the next two months. 7,000 more people in the UK and 10,000 in the US would also take part in the trial. EPA-EFE/SIPHIWE SIBEKO / POOL

Undocumented immigrants have in the past experienced what they describe as ‘medical xenophobia’ – and they say it’s in the best interests of South Africa that they are also immunised against the coronavirus.

While South Africans look forward to the arrival of the vaccines, the migrant community is increasingly worried whether they will have access.

On 1 February, South Africa received its first batch of Covid-19 vaccines –  a million doses of the AstraZeneca vaccine produced by the Serum Institute of India. Another 500,000 doses are expected to arrive later this month.

Once the vaccine has been approved by the SA Health Products and Regulatory Authority it will be administered to the country’s frontline health workers. This will mark the beginning of a nationwide mass vaccination campaign as part of the government’s measures to combat the pandemic.

Last week, health minister Dr Zweli Mkhize said only South African citizens would receive the vaccine during the roll-out, saying the government did not have the capacity to assist undocumented nationals.

“All you need when you go [for a shot] is to show that you have got an ID. That you are a South African registered voter. For those who are undocumented, we are not able to deal with that because at the moment we would like to be able to deal with people based on SA registration.

“So at this point, we have no plan to deal with those who are not documented,” Mkhize said during a Q&A session.

However, in a nationwide broadcast, President Cyril Ramaphosa said everyone – irrespective of nationality or residence status – would receive the vaccine during the roll-out because “it is in the best interests of all that as many of us receive the vaccine as possible”.

Ramaphosa added: “We aim to make the vaccine available to all adults living in South Africa, regardless of their citizenship or residence status.

“We will be putting in place measures to deal with the challenge of undocumented migrants so that, as with all other people, we can properly record and track their vaccination history.”

Zanda Chitora, a Zimbabwean who works as a cleaner in Johannesburg, said: “We know we are strangers here and we shall take the situation as it comes.

“But I want to receive it [the vaccine] if possible because I have seen the way the virus kills people here every day. I want to be safe and protected against it.”

Other migrants say it is not clear how the planned roll-out of the vaccine will benefit them and when this might happen.

“The government is not very clear about how foreign nationals will be part of the vaccine programme, even though the president assured us during the last broadcast that irrespective of citizenship, everybody will be vaccinated,” said Adetola Olubajo, president of the Nigeria Union in South Africa.

Olubajo, who worked in the education department in Limpopo before resigning in 2016, said: “We are not happy with the experience of foreign nationals when receiving healthcare. That is not to say that the government’s policies are anti-foreigner… but it is the poor service of the caregivers that is the problem.

“I think training and retraining health workers on these issues is very important in solving this problem that people see as systemic xenophobia or discrimination in access to health services.”

Olubajo said discriminating against migrants in the roll-out would not help because if migrants were infected, they could pass the virus to other citizens.

“So I believe the president and his task force team will make it available to both citizens and non-citizens, even though we are still waiting for the blueprint on how this will be done,” he said.

Migrants in South Africa have over the years had some nasty experiences when it comes to receiving access to healthcare, which some have described as “medical xenophobia”.

While anyone can be a victim of healthcare discrimination, this practice is most common among undocumented migrants who live in poor communities.

“We hope it [discrimination] will not come into play here because it is a very unfortunate thing if some health workers, who are trained to save lives, engage in discrimination that could lead to the loss of lives in some cases,” said Olubajo, who says he has experienced discrimination in the past when it comes to accessing healthcare.

“We hope the administration of the vaccine will be done in a fair manner.”

Phobia Mkhwebu, a Zimbabwean who has been living in South Africa for 20 years, said that while she had not experienced discrimination when it came to healthcare, she agreed that it did exist.

“If you go to some hospitals here [Johannesburg] and don’t have a permit, they will ask you to pay some money before they attend to your needs,” she said.

“I have been here for a long time so it has never happened to me. I guess I have been lucky, or maybe because I know the language and look like [a South African].”

Mkhwebu said she is sceptical about the vaccine and would take a back seat while monitoring the roll-out.

“If nothing [bad] happens to others after receiving it, then I will go for mine,” she said.

In a recent study on healthcare providers and migrants accessing medical services in Gauteng, respondents reported they had witnessed discrimination and differential treatment when it came to migrants.

Asked for comment on the status of migrants in the province regarding the Covid-19 vaccine, the Gauteng health department said the issue had been addressed by Ramaphosa and Mkhize during their separate addresses. DM

From a blocked nose to a ‘headache from hell’: The many symptoms of coronavirus