Annatjie Reynolds: The woman who made venison great aga...

Annatjie Reynolds: The woman who made venison great again 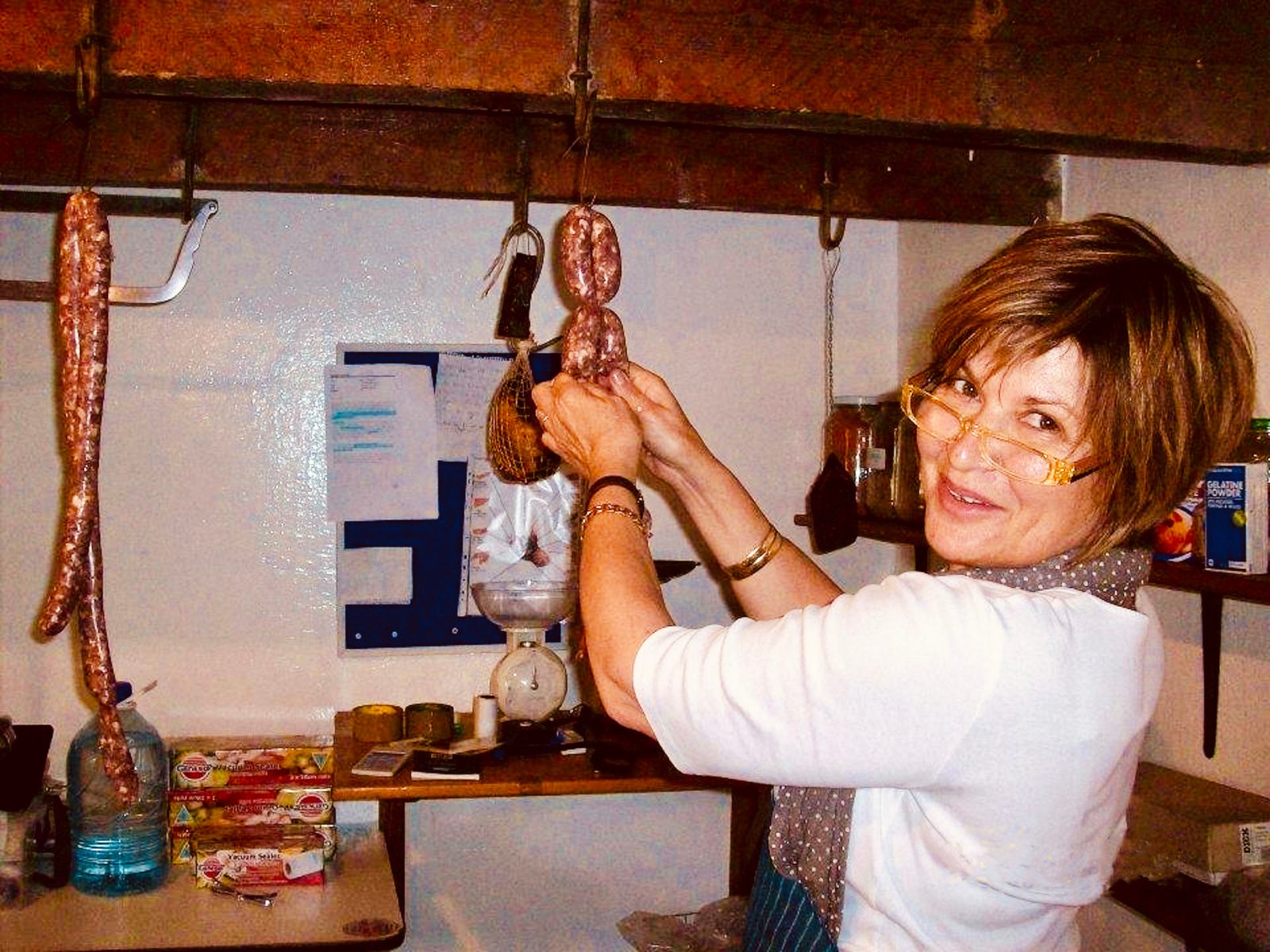 Able to break down a whole springbok or impala carcass in three-odd minutes, Annatjie Reynolds of Richmond, Northern Cape, is renowned in the Karoo as the Venison Queen.

How many are there? If we should start counting the food heroes in our midst… would we ever stop? How many legends are there behind the curtains, diligently working on a farm outside of Genadendal or in the suburb of Goodwood or deep, deep in the Moordenaars Karoo. I’m talking about the home industry bakers. The ginger beer makers. The gardeners and small-scale growers bringing food and life to places of hopelessness and drought. People who get up in the dead of night to start a batch of dough and, from it, shape our collective South African food identity. Fruit preservers and bottling specialists. Wedding cake connoisseurs. Or outback butcher wives who can break down a carcass with one strategic knock or cut at just the right spot.

Such legends live among us and with this new series I hope to bring honour to the warriors who continue to live and construct South Africa’s vibrant food narrative.

Although vastly varied, they all have one thing in common. Experience.  Few teachers are as thorough as experience.

Annatjie Reynolds from Nieuwefontein Farm outside Richmond in the Northern Cape is one such experienced force. Able to break down a whole springbok or impala carcass in three-odd minutes, Annatjie is renowned in the Karoo as the Venison Queen.

A couple of decades ago, newly-wed and planted on a Northern Cape farm with her husband Kobus at the age of 25, Annatjie shot roots into the Karoo soil and never looked back.

“Back then, I was working with the Red Meat Producers (RPO) of South Africa travelling to various towns and giving demonstrations on meat processing. I was breaking up whole carcasses, taking apart the different cuts of meat and utilising everything to obtain the best results even from the poorest cuts, so nothing is wasted.”

She’s blasé about these early years, but I can only imagine the Grey Suits of the RPO with their jaws on the floor, astonished by this fierce 25-year-old slicing and sectioning chunks of red meat as if she were Bill The Butcher from Gangs of New York. Annatjie was undeterred. She had trails to blaze.

“We were a sight to behold. Trekking across the Karoo with a bakkie full of macabre equipment… my trusted meat axe, the hand saw, a cold smoking drum that Kobus meticulously constructed for me, bags of wood chips, dozens of freshly-hunted springbok hindlegs on everyone’s laps and a giant carcass rack – also one of Kobus’ creations – in tow.

“Kobus is a real MacGyver,” she remarks.

“By the end of the day, everyone involved smelt like cowboys; thoroughly smoked and sticky from head to toe.”

Amid the smoke and sawing, something just clicked. “I combined my knowledge of meat processing and butchery with my home economics studies at Stellenbosch, just taught the people that came to those demonstrations the basic, practical skills,” she says. “Hands ON. If they partook in the technique, they remembered.”

The travelling meat demonstrations morphed into farm visits later on, which saved on logistical endeavours. For select events, however, Annatjie still assembles the troops to trek wherever eager learners await.

“I always say I’ll never do it again… but my cousin Rijk Melck from Muratie Wine Estate outside Stellenbosch just begged me to do two classes with them in June. Of course, I agreed! I don’t know why I keep doing this,” she says, roaring with laughter.

In 2000, when Union Preparatory School in Graaff-Reinet launched a recipe book fundraiser, the rest of SA got a glimpse of Annatjie’s gift for working with venison. The now-legendary “Karoo Family Favourites” recipe book was first compiled by Annatjie and dear friends Janet Kingwill and Lynn Minnaar.

“People from all over SA started reaching out to us for more venison recipes. We couldn’t believe it,” Annatjie recalls.

Venison wasn’t always considered the luxury ingredient we know today. Especially among new-age hunters and outfitters (who know more about shooting and stuffing animals than processing meat, sadly), only the good cuts were used to make mainly biltong and droëwors. The rest was often ill-prepared and then disliked for being tough or having an overly robust, gamey taste. It’s still an ignorant opinion among some people today.

With the response to the recipe book fuelling her conviction, Annatjie was hosting small groups of no more than five people at a time on Nieuwefontein farm and slowly managed to convince perhaps the toughest crowd in history – stubborn South Africans – to love venison again.

“A few years later Lynn and I, along with Albe Neethling, got together and started working on a new recipe book focused exclusively on venison. We tested every recipe ourselves; we held food demos and invited people to help create dishes to take the photos for the book. Then, we published it. All by ourselves. It was a major success. Lynne and Albe and I managed the first four editions’ printing, marketing and distribution ourselves. We became expert publishers. After that, Johnathan Ball publishers took over. Karoo Venison is now in its seventh print and still going.”

Hetsie Scheepers from Patensie was one. “Like many other farmers’ wives, I used to cut up a whole leg of venison for biltong and just use the rest for droëwors,” she says. “I have processed many carcasses in my life, but I never did it right, I realised. The principles she taught me are foolproof and honour the different purposes of the cuts, whether you’re working with pork, lamb, beef or venison. No one has ever shown me this with so much confidence and passion for the produce.

“More than that, she managed to give us a real perspective into what it was like to live on a working farm. Sure, there were romantic elements such as a coal-burning AGA stove in the kitchen and an afternoon of drinking wine on the stoep. But Annatjie made clear the responsibility of working well with what’s at your disposal. The practical ability to work with venison is something I will never unlearn. But there is something else, intangible, that made the experience at Nieuwefontein sacred,” Hetsie remembers.

For Annatjie, the purpose is working well with what you have. “Food is a part of my life. For many people, it’s a hobby or something you do when inspiration takes you; a way to pass the time. It’s different for me on the farm. Here it is a lifestyle.

“I could have easily put my feet up against the AGA and enjoyed a peaceful farm life when we first moved here. But that’s not realistic. No real farmer’s wife does that. It is an art to live beautifully with what you have at your disposal. To take something simple and plain and be creative with it. It’s a privilege.

“I’m 60 now and I know that I want to grow old with purpose. That’s why whenever someone asks for my help in understanding and working with venison, I still say yes. I will always want to share my knowledge with other people.”

Annatjie’s recipe for springbok rump stuffed with smoked oysters and flambéed in a port sauce is her all-time favourite, she says.

“It’s so flamboyant and decadent, it just feels like Christmas.”

Here’s how to make it…

2 sprigs of thyme, for garnish

Use a sharp knife to make a small incision in the middle of the rump, creating a pouch for stuffing. Be careful not to make the cut too deep.

Drain the smoked oysters but keep the oil aside to be used later.

Stuff the smoked oysters into the cavity in the rumps and secure the meat using toothpicks.

Heat the reserved vegetable oil in a pan and sear the rumps on both sides. Carefully add the port to the pan and set alight. Reduce the liquid to half before adding the cream. Gently bring to a boil. Season to taste.

Remove the rumps from the sauce and rest for 10 minutes.