A MAD TEA PARTY: With apologies to Lewis Carroll 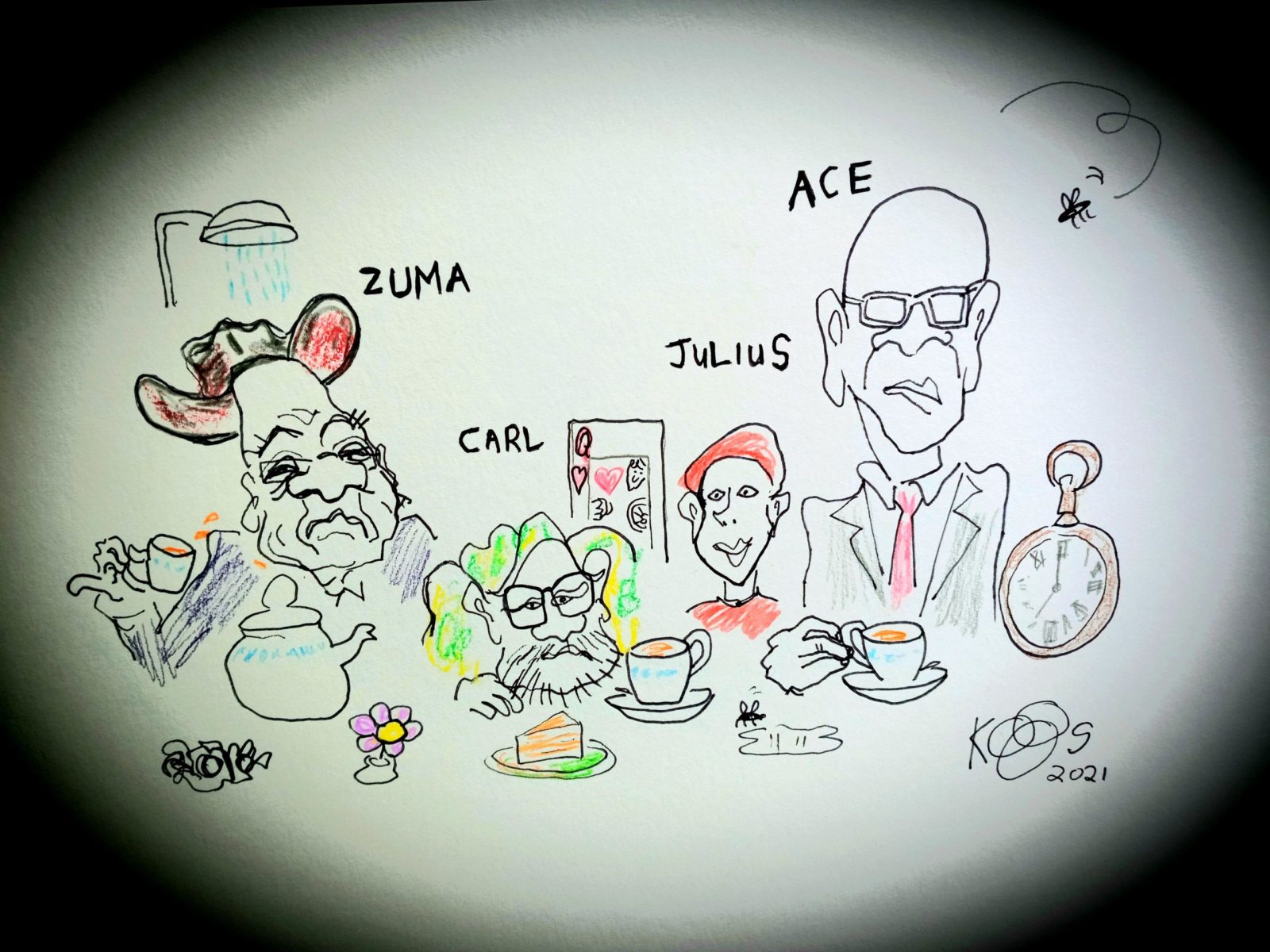 The Setting: Nkandla. The Time: Some time in the foreseeable future. The Occasion: Discussions about the possible launch of a new political party.

There was a table, set out under a tree in front of the crumbling house, at which the Mad Ex-President and the Secretary-General Who Refused to Step Aside were having tea: in between them was a fat little man who kept on falling asleep and another little man dressed in red.

The Mad Ex-President was called ZUMA. The Secretary-General Who Refused to Step Aside was called ACE. The two little men in the middle were CARL and JULIUS.

“Have some wine,” ZUMA said in an encouraging tone.

“Then it wasn’t very civil of you to offer it,” said JULIUS angrily (JULIUS was always angry at somebody or something).

“I’d forgotten the liquor stores are closed over weekends,” said ZUMA. “Blame it on Ramaphosa!”

CARL opened his eyes and said, “Why are the liquor stores closed over weekends?”

“Come, we should have some fun now,” thought JULIUS angrily. “Why is everyone talking in riddles?”

“Everything is Ramaphosa’s fault!” exclaimed ACE. “Can I have some tea?”

“Rooibos for me,” said JULIUS angrily. “I cannot see grey areas in anything.”

“Where are the cucumber sandwiches?” asked CARL.

“Oh, they were supposed to be delivered by the folks from Bell Pottinger, but they changed their minds at the last minute,” said ZUMA.

“I thought of that first!” said JULIUS angrily.

“Thought of what?” asked CARL, and fell asleep.

“White monopoly capital,” said JULIUS angrily. “It was my idea to use that phrase for propaganda, long before Bell Pottinger even thought of it.”

CARL shook his head impatiently, and said, “Wake me up when the cucumber sandwiches have arrived!”

“We have some cheesecake,” said ZUMA.

“Did you make it yourself?” asked ACE.

“No, I bought it with money from… never mind,” said Zuma. “Remind to give each of you a brown envelope when you leave!”

“So what about this new party we’re starting?” asked ACE. “What shall we call it?”

“Please pass me the bread knife,” said CARL, waking up with a start. “I’ll have some cheesecake after all.”

“What a funny watch you have!” ACE said to JULIUS. “Is it a real Breitling?”

“Yes,” said JULIUS proudly. I bought it with money from… never mind!”

“What is the time?” ZUMA asked JULIUS.

“It’s always four o’clock,” said ZUMA. “Time does not change in Nkandla. I am forever having tea. It’s all I ever do. I think of my glorious political career and I drink tea. I’m so happy that you could all join me today!”

He poured all of them some more rooibos tea. “I think we should call our party the Tea Party,” he said.

“But what if people confuse us with the Boston Tea Party?” asked ACE. “I don’t want anyone to think we are copying any idea from the American capitalist scum! We should call it the ACE TEA PARTY!”

“No, the tea party was my idea!” said ZUMA. “We should call it the ZUMA TEA PARTY!”

“What about the JULIUS TEA PARTY?” asked JULIUS angrily. “After all, I am in Parliament already. “You guys are all on your way to jail.”

“We are all a bit mad,” said ACE to ZUMA. “We were mad to make you president in the first place. Now look where you got us all.”

“We should call it the MAD TEA PARTY,” said JULIUS. “We are mad to be drinking tea together, and we are mad to think we can ever win an election.”

“Shall we drink to the MAD TEA PARTY?” asked ZUMA, and lifted his teacup.

“Have you got any wine?” asked JULIUS.

Everyone raised their cups, except CARL, who was snoring peacefully.

“To our new party!” said JULIUS.

“I know what’s happening here,” said CARL, waking up and looking about him drowsily. Then he said, philosophically: “This is the long dark teatime of the soul.”