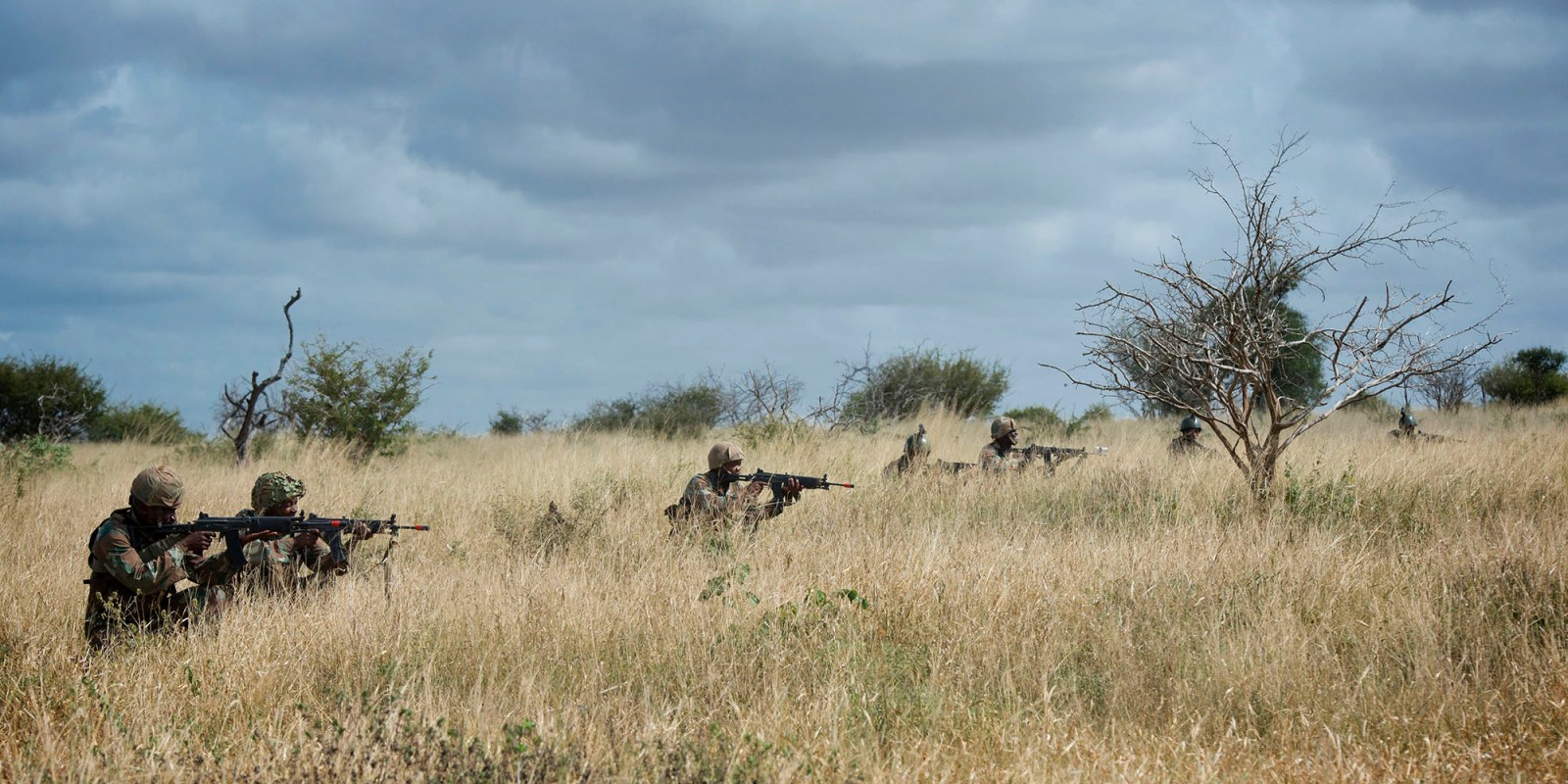 SANParks rangers, police and members of the SANDF during an anti-poaching demonstration at the Kruger National Park. (Photo: Gallo Images / Foto24 / Herman Verwey)

Speed is critical when rangers have to intercept armed poachers in the rough and remote terrain of Africa’s game reserves. But they also need to move silently – which is why a new electric bush bike could turn out to be an important addition to the continent’s anti-poaching arsenal.

But even if they are lucky enough to enjoy air support or have access to vehicles, rangers still need the element of surprise when intercepting armed poaching gangs.

In the Kruger National Park, the epicentre of the rhino horn war, poaching has been the main reason for a dramatic two-thirds decline of the world’s single-biggest population of wild rhinos over the past decade – despite the deployment of a wide range of expensive and sophisticated anti-poaching technologies.

In Kruger and some parks in KwaZulu-Natal, the intensified anti-poaching strategies have included the installation of new radar and infrared detection systems developed by the Council for Scientific and Industrial Research and other research groups.

Night-time helicopter support has also played a crucial role, but at the end of the day rangers’ boots on the ground are still needed to engage and arrest poachers.

In KwaZulu-Natal, some tried-and-trusted “low-tech” mobility interventions have also proved useful, with the recent reintroduction of armed horseback patrols in some sections of the Hluhluwe-iMfolozi game reserve.

Horses have been an indispensable feature of warfare from antiquity and for more than 60 years mounted patrols were used in this reserve to track down poachers in landscapes that Land Rovers and other noisy vehicles could not get to easily.

Former Natal Parks Board rangers Nick Steele and Hugh Dent, who pioneered horseback patrols in iMfolozi in the 1950s, found that horses helped to camouflage the human form, mask the human scent and get them to places much faster than slogging there on foot could.

Now a new Swedish-designed “silent horse” on two wheels is about to be tested on the borderline of the Kruger Park.

The solar-powered electric bush bikes, developed by the Stockholm-based Cake group, are powerful all-terrain motorbikes whose biggest operational advantage is that they are almost silent, unlike noisy petrol-powered off-road scramblers which can often be heard from several kilometres away.

According to Cake, the bikes weigh just 78kg, reach a top speed of 90km/h and have a range of at least three hours of hard riding between battery charges.

Branded as Kalk AP (Anti-Poaching), the special-edition bikes will be optimised for use in the African bush with the help of staff at the Southern African Wildlife College on the western boundary of the park in the coming months.

There is also a plan to provide several of the e-bikes to a number of game reserves around Africa as part of a partnership between Cake, the college and Goal Zero.

Goal Zero is a company in the US that develops small, portable, solar-power stations for areas not connected to the national electricity grid, while the college has trained more than 18,000 people in the conservation and environmental sector since 1996, including wildlife rangers and park managers from several African nations.

Profits from the global sales of the bikes will be used to sponsor the delivery of purpose-built electric bush bikes to several conservation areas around Africa.

The bikes are powered by a 50A/2.6kWh battery to deliver a peak motor output of 11kW. Because the electric motors are sealed, Cake claims the bike is fully submersible and resistant to the harsh, dusty conditions rangers are likely to encounter.

Company founder and CEO Stefan Ytterborn launched his first electric motorcycle in 2017, aiming to reach a 10% market share in off-road motorcycles in 10 years.

While electric off-road motorbikes remain a niche market, the sale of electric cars has increased rapidly in Europe and the EU plans to have at least 30 million zero-emission vehicles on its roads by 2030.

Reuters reported recently that Norway became the first country in the world where the sale of electric cars had overtaken those powered by petrol, diesel and hybrid engines in 2020, with German carmaker Volkswagen replacing Tesla as the top battery-vehicle producer.

Seeking to become the first nation to end the sale of petrol and diesel cars by 2025, oil-producing Norway exempts fully electric vehicles from taxes imposed on those relying on fossil fuels.

Reuters said the policy has turned the country’s car market into a laboratory for carmakers seeking a path to a future without internal combustion engines, vaulting new brands and models to the top of bestseller lists in recent years.

In Germany, which has a €9,000 electric car purchase subsidy, 562,000 low-emission vehicles were sold in 2020 while Denmark plans to have at least one million zero-emission cars on its roads by 2030. DM