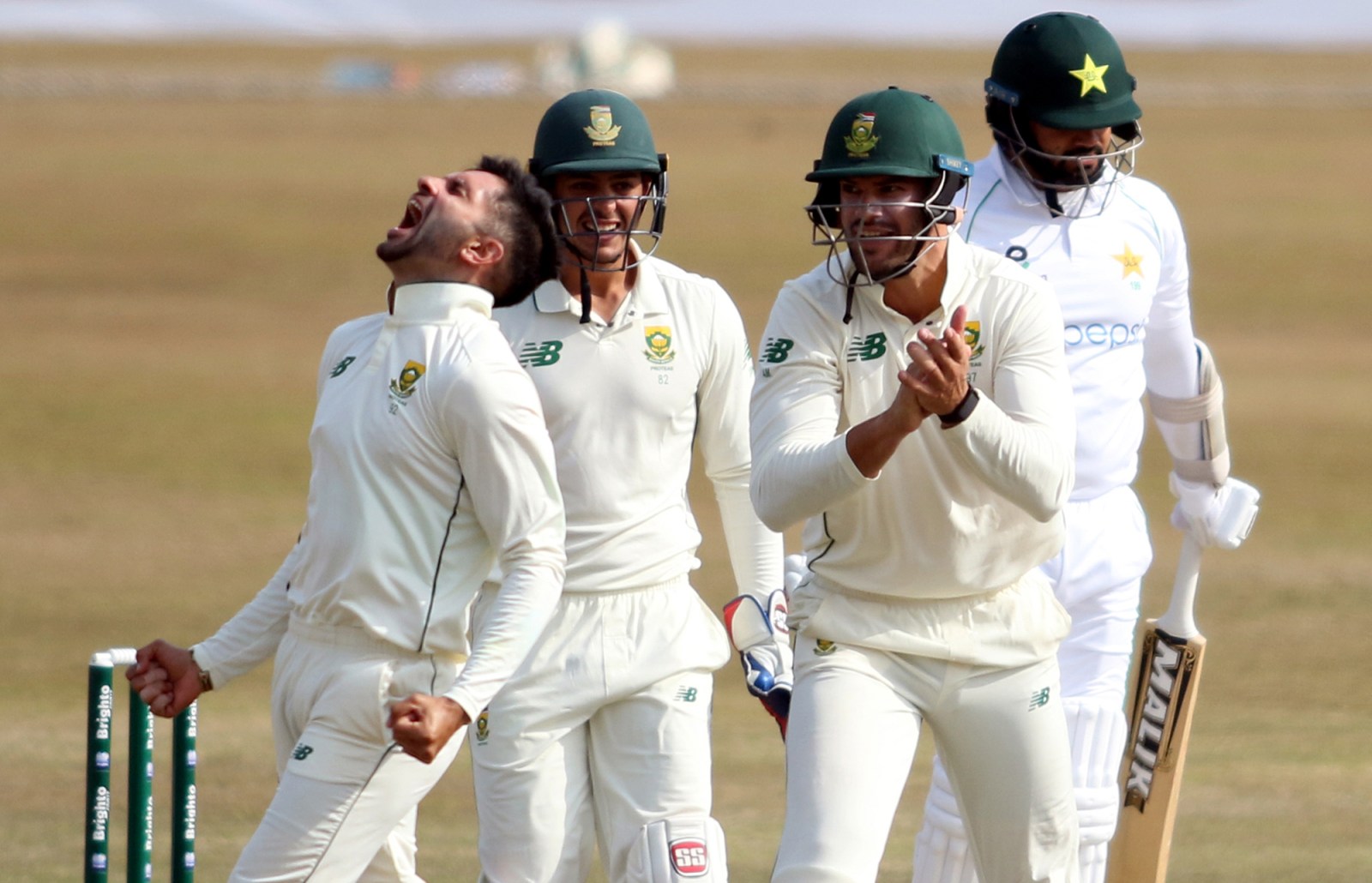 A rain-shortened first day of the second Test in Rawalpindi between Pakistan and South Africa saw the home team come out on top after an initial wobble.

Barely an hour into day one of the second Test, Pakistan were reeling at 22 for three after winning the toss and batting. But by the early close, the home team were sitting pretty at 145 for three thanks to the class and skill of captain Babar Azam and first Test centurion Fawad Alam.

South Africa, by contrast, were sombre. After a good first hour, the rest of the day belonged to Pakistan and the tourists had spinner George Linde taken to hospital with a finger injury.

It turned out to be nothing worse than bad bruising and a gash, but the left-armer didn’t bowl again after sustaining the injury late in the first session. It meant fellow spinner Keshav Maharaj bowled 25 overs on day one, having come into the match under an injury cloud himself.

Although initially successful, once the ball was 20 overs old it did little on a slow, dry pitch that had little bounce and life. With conditions becoming increasingly comfortable for batting, Pakistan cashed in and only an unexpected late afternoon downpour spared the Proteas.

Babar, who failed to make an impact with the bat in Karachi last week, looked comfortable on 77 not out at the close. A century on day two beckons against a Proteas bowling attack that lacked penetration once the new ball aged.

Fawad, with his crab-like stance, was in total control of his innings and took his dinner on Thursday nicely placed on 42 not out. There were no demons in the pitch or from the sagging Proteas attack for these two to sweat over. The pair have so far put on an unbeaten 123 for the fourth wicket. If they are allowed to play themselves in on day two, Pakistan could bat the Proteas out of the match by the close.

Babar was all class with some beautiful drives and brilliant defence while Fawad was not as easy on the eye, but no less effective. Babar’s runs came quickly, scored off 125 balls with 12 boundaries. Fawad played with more care, taking 135 balls and hitting only five fours by the close.

Quickly out of the blocks

Early on Thursday, the new ball swung with fast bowlers Kagiso Rabada and Anrich Nortje inducing some false strokes from openers Abid Ali and Imran Butt. But it was the early introduction of Maharaj’s slow left-arm that made initial inroads as Pakistan lost three wickets for the addition of one run.

In the 12th over, Butt (15) edged faintly to one that turned away from him and South Africa skipper Quinton de Kock took a sharp catch. Two overs later Maharaj trapped Azhar Ali (0) leg before. The batsman played for more turn and was stone dead.

An over later, Nortje, who cranked up his pace to over 150km/h at times, removed Abid (6) thanks to a wonderful catch by Aiden Markram at short leg. The ball caught a faint edge, on to the thigh pad and spat out to leg side where Markram took a reflexive diving catch.

But it was all downhill from there.

“The new-ish ball sort of sticks in the wicket, because of the moisture,” Maharaj told the media after play. “But as the day went on and the moisture seeped away from the surface, the turn minimised substantially.”

The rain, though, might play into South Africa’s hands – at least that’s what they’re hoping.

“With moisture around it might bind it again (on day two),” Maharaj said hopefully. “I think if we get in a full day’s play that we’ll have a clearer idea by the end of the day (two) if the wicket will deteriorate.” DM