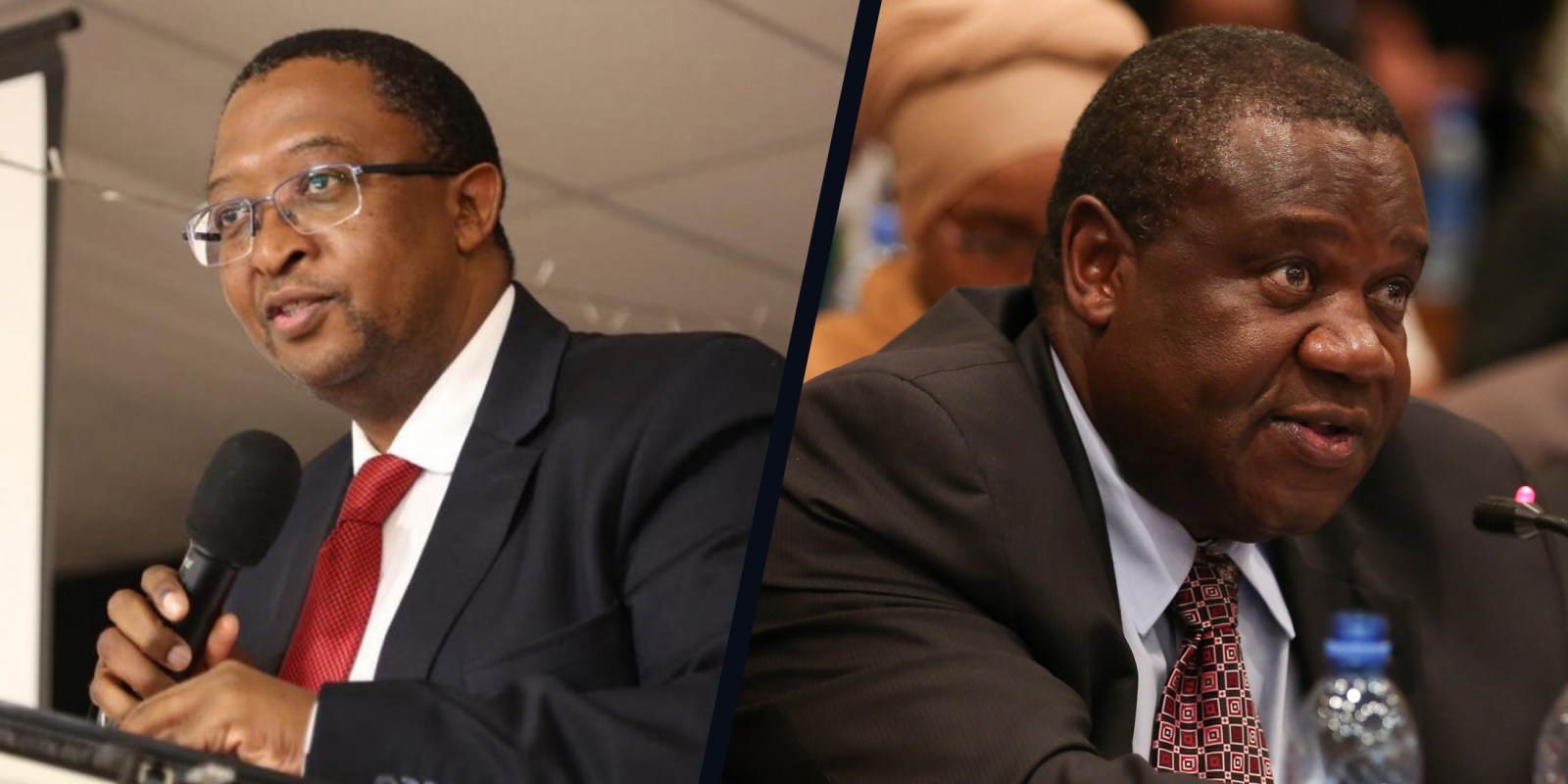 One of South Africa’s top diplomats will be making a bid to become Africa’s politics, peace and security chief on Saturday.

Jeremiah Kingsley Mamabolo, who has been South Africa’s ambassador at the UN, at the African Union and in Nigeria and Zimbabwe, has been shortlisted to become the African Union’s first commissioner combining the important political affairs portfolio with that of peace and security.

The election will take place at the annual AU summit to be held online. It’s the first time that South Africa is competing for a specific portfolio on the AU Commission — though Nkosazana Dlamini Zuma, now South Africa’s Minister of Cooperative Governance and Traditional Affairs, chaired the AU Commission from 2012 until 2017.

The political affairs commission and the peace and security commissions are now separate. The latter one by itself is widely regarded as the most influential commission as its incumbent manages the continental body’s efforts to resolve the many conflicts on the continent.

By combining it with political affairs, the AU has made the position even more powerful, enabling the commissioner to also manage political disputes and instability — such as protests about stolen elections or just general political repression — which often provoke open conflict and violence.

Apart from his important ambassadorships, Mamabola has been deputy director-general for Africa in the Department of International Relations and Cooperation and special envoy for the Great Lakes — where he helped to mediate peace in Burundi and the eastern Democratic Republic of Congo.

He was until recently the head of the joint African Union-United Nations Hybrid Mission in Darfur, commanding joint efforts by the two bodies to maintain peace and promote development in the strife-torn western region of Sudan.

Despite his impressive diplomatic CV which would on its own make him a clear front-runner, Mamabolo faces challenges because of the AU’s regional politics and the vagaries of the voting system for the commission.

The new commission — comprised of a chairperson and deputy chairperson and six commissioners in charge of specific portfolios, will be elected at this week’s African Union summit which will take place virtually on 6 February.

Another South African has been shortlisted for a different portfolio on the commission which could complicate Mamabolo’s chances. Former director of the National Research Foundation Molapo Qhobela is standing for election as Commissioner for Education, Science, Technology and Innovation.

This year for the first time, the AU has tried to raise the importance of merit, rather than nationality or regional partisanship, as a criterion for election to the commission. It therefore commissioned a panel of AU experts to assess the original list of 89 candidates for the six portfolios on the commission and whittled it down to 25. Qhobela was ranked top among the five candidates for the job he is seeking, with a score of 91.45%.

Mamabolo made the shortlist of four candidates for the political affairs and peace and security portfolio. But he was not ranked highest among the candidates. Based also on criteria such as published writings, the panel gave the highest score – of 94.64% — to Nigerian Bankole Adeoye, a less-experienced career diplomat who was until last year his country’s ambassador to the AU and to Ethiopia and has also served as chief of staff to the head of the New Partnership for Africa’s Development (Nepad) based in South Africa.

Second on the expert panel’s list was the Burkinabe Minate Cessouma, who scored 86.73%. She is the AU commissioner for political affairs and was previously Burkina Faso’s ambassador to the AU and the EU, as well as to Kenya, Rwanda and Djibouti.

Mamabolo came a close third with 85.14%, followed by Tanzania’s Liberata Mulamula, in fourth place with 82.3%. She is the associate director of the Institute of African Studies at George Washington University in Washington, DC and a former permanent secretary (director-general) in Tanzania’s Department of Foreign Affairs.

Mamabolo’s chances are also complicated by the regional and gender balance politics of the AU and the voting procedures, Liesl Louw-Vaudran, senior researcher at the Institute for Security Studies (ISS) said at an ISS webinar last week.

If he gets the new political affairs, peace and security commissionership, Mamabolo will face perhaps the greatest challenge, of trying to restore peace to Africa’s many war-torn countries. The AU’s 2020 theme was Silencing the Guns. When that initiative was launched in 2013, the “deadline” for ending the fighting was the end of 2020. By last year it was clear that wasn’t going to happen and the “by 2020’ suffix quietly lapsed.

Though the AU has ostensibly tried to base the election of commissioners on merit, national and regional politics still played a large role, she said.

The AU divides Africa into five regions – north, west, central, east and south — and is fastidious about ensuring a balance among the regions in commissioners. In addition, at least half of the eight commissioners must be women.

AU Commission chairperson Mohamed Moussa Faki of Chad is not being challenged in his bid for re-election. However, he still requires a two-thirds majority of heads of state to keep his job. This seems likely, however. If he is re-elected, then his region, central Africa, may not stand for any other position. The deputy chairperson would then have to be a woman, elected from the female candidates shortlisted for that position, from Ghana, Rwanda, Gambia, Uganda and Djibouti.

If one assumes that, say, Ghana wins the deputy chair, then West Africa will also be excluded from any of the other commission portfolios.

This will mean the six portfolio commissions will be divided among north, east and southern Africa, so they will likely get at most two or perhaps three commissions each.

The candidacy of the other South African, Qhobela, who is also a former vice-principal of the University of South Africa and former deputy director-general in the Department of Science and Technology, is apparently being supported strongly by International Relations and Cooperation Minister Naledi Pandor, as the two have come a long way together, since she was minister of science and technology and of national education.

If he is elected and Angola’s Josefa Leonel Correia Sacko is re-elected, as commissioner for agriculture, rural development, blue economy and sustainable environment — and even more so if Zambia’s Albert Muchanga is also re-elected, as commissioner for economic development, trade, industry and mining — then Mamabolo’s chances of election will become slim, as southern Africa will have reached its quota even before voting starts.

It also depends on the order of voting for the different commissions, Louw-Vaudran said. She thought that the election of the commissioner for political affairs, peace and security would be second-last which could hurt Mamabolo’s chances — although the order could change.

Louw-Vaudran also noted that the Southern African Development Community, representing most of the AU’s southern region, had complicated the problem by failing to meet to coordinate its candidate for the AU Commission, as it had in the past. The other commissions are infrastructure and energy and health, humanitarian affairs and social development. She said the AU Commission was a very important body, the only continental government that Africa had, which made Saturday’s elections important. The new commission would be called upon to implement recent reforms, to streamline the commission and to make it more effective.

If he gets the new political affairs, peace and security commissionership, Mamabolo will face perhaps the greatest challenge, of trying to restore peace to Africa’s many war-torn countries. The AU’s 2020 theme was Silencing the Guns. When that initiative was launched in 2013, the “deadline” for ending the fighting was the end of 2020. By last year it was clear that wasn’t going to happen and the “by 2020’ suffix quietly lapsed.

In fact, the number of conflicts on the continent has continued to grow recently with a new civil war breaking out between the national Ethiopian government and dissidents in the state of Tigray and an insurgency in northern Mozambique gathering momentum.

On 6 December 2020, the AU held a special online summit on Silencing the Guns to assess progress. It decided to extend the deadline to 2030.

But as national director of the SA Institute of International Affairs Elizabeth Sidiropoulos said at the same ISS webinar last week, unless the AU becomes more frank and forceful in calling out leaders who repress their political opponents and limit political space, it will struggle to contain violent conflicts — because denying people democracy, human rights and good governance is often the spark that ignites conflict. DM