Fire and Rain: Misery of a Joburg informal settlement 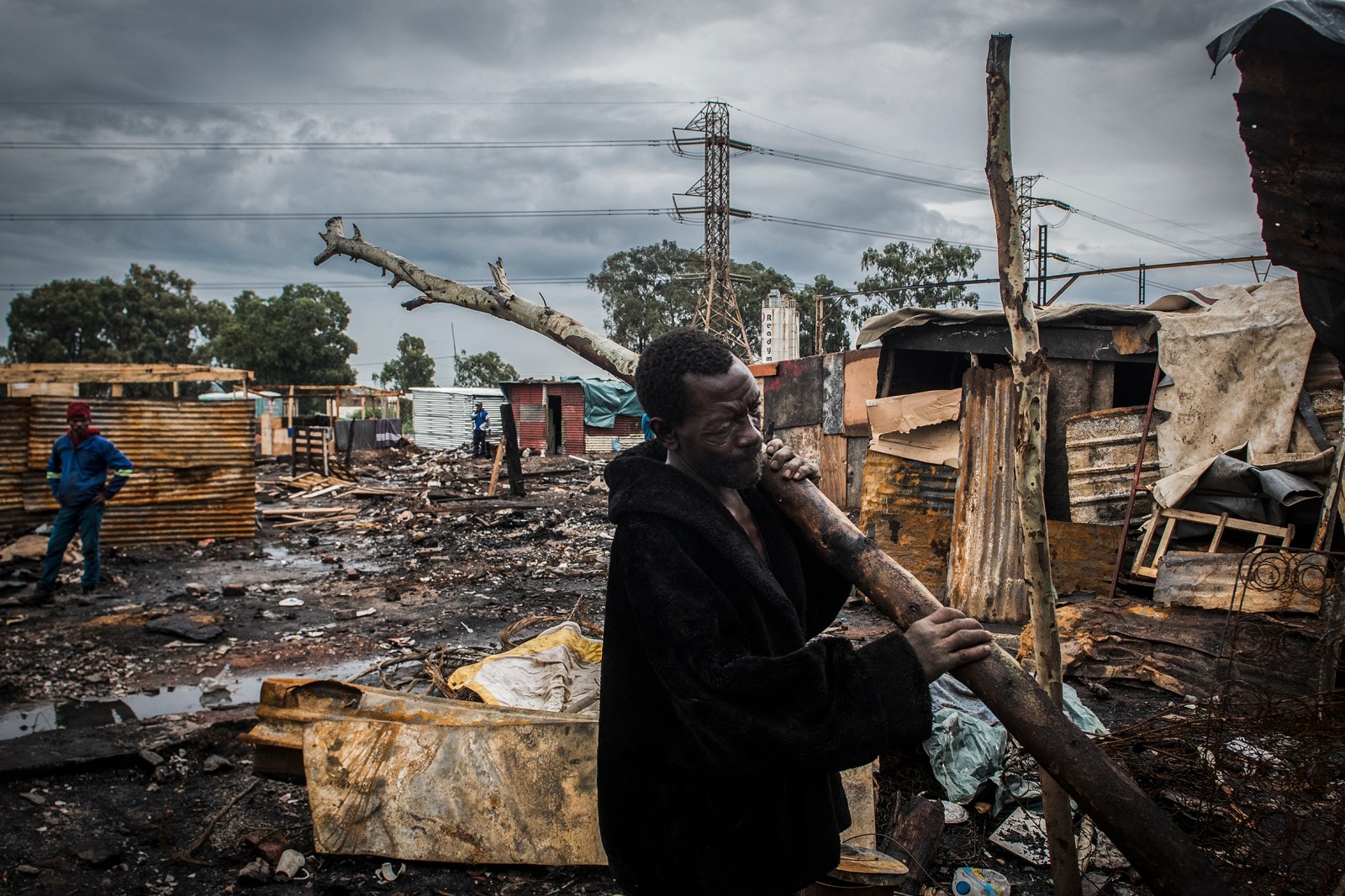 Bevan Mutasa, who sleeps outside because he is unable to rebuild his shack, described the fire and recent rainfall as a disaster. (Photo: Shiraaz Mohamed)

For many, the recent and ongoing rainfall over Joburg has been a welcome blessing and respite from the hot days of summer. For the residents of the Booysen informal settlement, it’s been a curse.

Finduile Vinjua and his wife huddle together under plastic. Try as they might to keep dry, they are fighting a losing battle.

“It’s been raining for over seven days now. The rain stops for about half an hour but it does not go away. God is really testing me. It’s a big problem. At night when myself and my wife go to sleep, we cover ourselves with plastic but we still get wet,” Vinjua says with exasperation.

Vinjua and his wife are among more than 1,000 people who lost their homes in a devastating fire that ripped through the Booysens informal settlement on 22 January, leaving in its wake 400 gutted shacks and residents with just the clothes on their backs.

According to Joburg EMS spokesperson Nana Radebe, emergency services received a call at around 4pm about the fire at the informal settlement. Firefighters battled for hours to contain the blaze. Some residents were able to save a few of their belongings while others lost everything.

That night, residents were seen carrying whatever they had salvaged while others stood around in groups – many had no idea where they would sleep and the only option available at that point was to sleep outside.

The following day, smoke lingered in the air as residents began cleaning areas where their shacks once stood. A woman was seen sleeping in the bush, covered by a blanket. She got up and walked a few metres, sat down and relieved herself in full view of people walking past.

Resident Joseph Khumalo, who had gone to look for work when the fire broke out, was still in shock at losing everything.

“It’s like a dream. It is like I am sleeping and I am still going to wake up tomorrow morning and say ‘f***’ I had a bad dream. I was in town when the fire took place… When I came back I saw the place was full of smoke. I could not stand and watch, I tried to save some of my things, but the fire was too strong.”

Another woman, who did not want to be named, expressed her anger at their local councillor.

“The councillor knows people only during voting time. They come here with the Quantums (minibus taxis) and take us to go and vote. After voting you cannot find them here. They are gone and forgotten. They promised us it wouldn’t take long for them to build RDPs (Reconstruction and Development Programme houses) and move us to a better place. But after voting they go, so we are just used as tools. When there is no voting you don’t see them.”

And just as the residents — who have been depending on handouts from organisations for food, blankets and clothing — began rebuilding their lives, they were dealt another blow. Johannesburg has undergone heavy and continuous rain and with many unable to buy new building materials to rebuild their homes, they have had to sleep where their shacks once stood or take refuge in a nearby abandoned building.

Vinjua has managed to collect material by scavenging at local dump sites and has managed to put up the walls of his shack. “I don’t have money (for a roof). I found material in the bush. It took me some time as I found an item at a time. I also go to the dumpsite to look for material to build. The problem is that I am unemployed.”

Resident Bevan Mutasa, who also sleeps outside because he is unable to rebuild his shack, said: “The fire was the first thing, then the rain came. It’s a disaster. My man, I tell you, I sleep there (in the open); my friends are like me, we all sleep in the open. Where will I get money to build, I am not working, I can’t even get a job. It’s raining for five days now, and we have been sleeping in the rain for five days now.”

Moses Mdlalosa has been more fortunate — he was able to rebuild his shack with money that he had saved in 2020.

“It cost about R2,900 to build my shack. I managed to save some money from last year. But other people have nothing. They don’t have any plan to rebuild their shacks. People have given us food and blankets, but they didn’t give us material. I said we need material for rebuilding. We don’t have a problem with food and clothing. It’s just the material.”

Salvation Army public relations secretary Captain Velani Buthelezi said, “It’s always a painful experience to see people in distress, especially in such a time like this. We gave the community new and second-hand clothes for children, women and men. We also provided some Pampers for babies, a few blankets, kitchenware and mattresses.”

Johannesburg Disaster Management’s Tshepo Motlhale confirmed that some residents had been moved to a temporary shelter, but could not say how long they would be kept there. “It is difficult to give an indication at the moment because right now we are also looking at other possible solutions. If the government provides them with building materials, that is also another solution.”