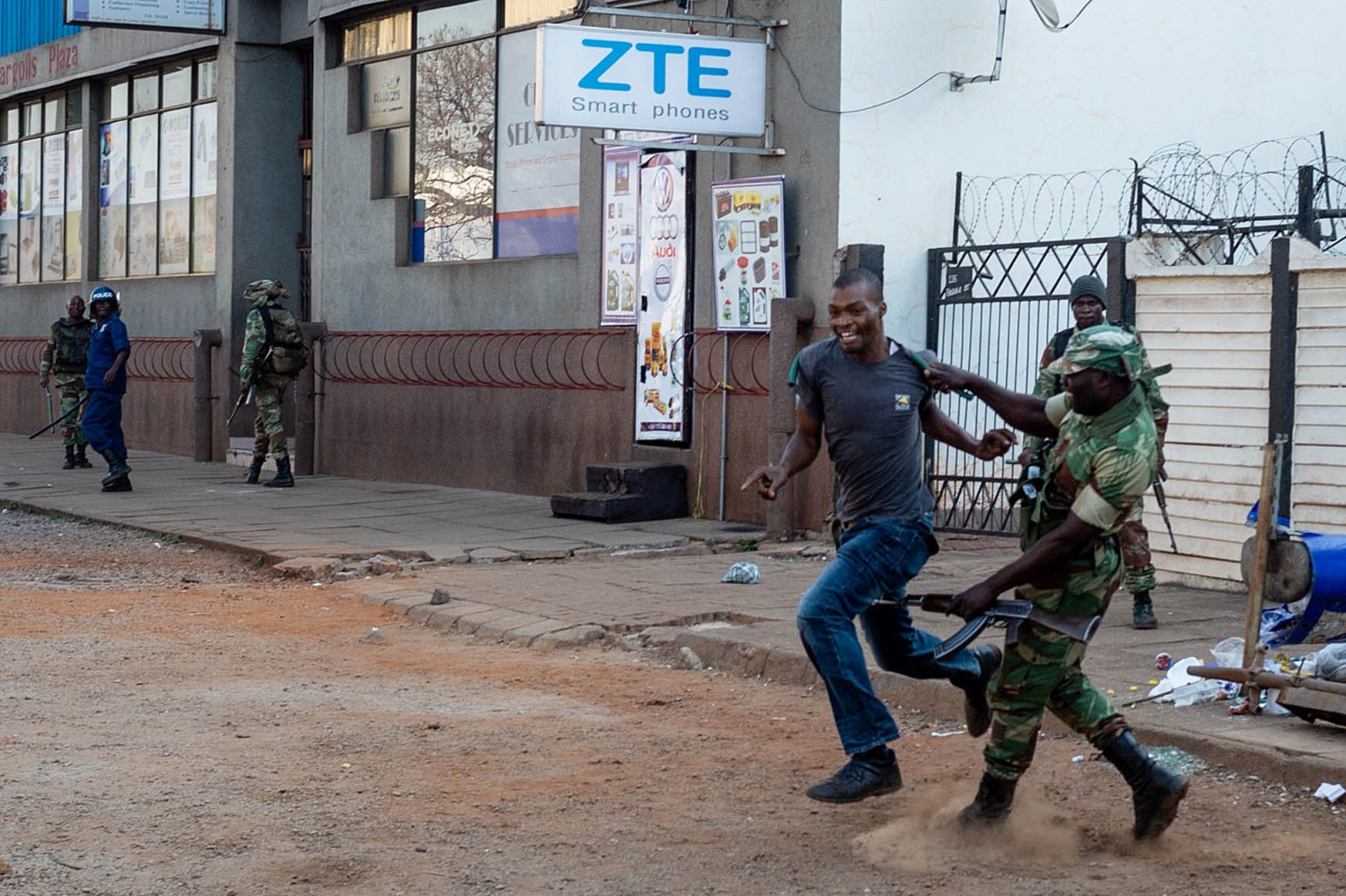 A man suspected of being a protester is assaulted by members of the Zimbabwean army during a protest against polling results in Harare, Zimbabwe on 1 August 2018. The day saw protests turn violent when police fired rubber bullets and teargas before the army was called in and began firing live rounds. (Photo: EPA-EFE / Yeshiel Panchia)

UK foreign secretary Dominic Raab says the four were most responsible for deadly crackdowns in August 2018 and January 2019.

Britain has slapped targeted sanctions on the four senior Zimbabwean security force commanders it holds most responsible for brutal and deadly crackdowns against protesters in August 2018 and January 2019.

The travel bans and asset freezes which UK foreign secretary Dominic Raab announced on Monday were the first actions taken by the UK under its autonomous Zimbabwe sanctions regime against human rights abuses which it introduced on 31 December after leaving the European Union.

The additional sanctions mark a significant turning point in London’s policy towards the Emmerson Mnangagwa regime. When he ousted longtime president Robert Mugabe in November 2017, Britain was at the forefront of Western and other countries arguing that he should be given a chance to implement his promised economic and political reforms.

Now, just over three years later, even Britain, like most other Western nations, has completely lost faith in his reforms and so has brought back the stick in its foreign policy. Raab said the sanctions, which include a ban on travel to the UK and a freeze on assets there, would target:

“These targeted designations hold to account those responsible for the worst human rights violations against the people of Zimbabwe since President Emmerson Mnangagwa took power in November 2017,” Raab said.

“This includes a state-sponsored crackdown against protests in January 2019 that resulted in the deaths of 17 Zimbabweans and post-election violence in August 2018 in which six protesters lost their lives.

“These sanctions send a clear message that we will hold to account those responsible for the most egregious human rights violations, including the deaths of innocent Zimbabweans.”

Raab’s office said the report of Motlanthe Commission into post-election violence had held Zimbabwean security services responsible for six deaths and 35 injuries during the 1 August 2018 protests in Harare against the presidential and parliamentary elections two days before.

“The report also concluded that the use of live ammunition on civilians was ‘clearly unjustified and disproportionate’ ” the UK said.

And it noted that the Zimbabwe Human Rights Commission’s 28 January 2019 report on the government’s response to the January 2019 fuel protests found that law enforcement agents seemed to “resort to use of brute, excessive and disproportionate force in most circumstances thereby causing avoidable loss of life and also worsening the situation”, resulting in the deaths of 17 people.

“A Human Rights Watch report details allegations of rape and indiscriminate door-to-door raids by the Zimbabwean security services,” the UK government added. As Raab indicated, the four security force commanders were targeted because they were considered to be the most responsible for the violence and deaths during the August 2018 and January 2019 protests.

As minister of state security, Ncube was held responsible particularly for the crackdown on the 28 January 2019 protests, which included allegations of torture of protesters. He was also deemed responsible for directing Econet to shut down the internet that day, which the High Court later held to be illegal. Moyo, as head of the CIO, was deemed to share responsibility for the order to Econet as well as for the general crackdown of 28 January 2019.

Matanga, the head of police, who was in Harare at the time of the 1 August 2018 post-election protests, was held to share responsibility for the crackdown that day. Sanyatwe, as former Tactical Commander of the National Reaction Force, was deemed responsible for that force’s direct involvement in the 1 August 2018 crackdown in which members of the force shot dead six people.

Raab said the sanctions imposed on the four commanders “ensures these individuals cannot freely travel to the UK, channel money through UK banks or profit from our economy. These restrictive measures are not targeted at, nor intended to impact, the wider economy and the people of Zimbabwe,” he stressed.

Mnangagwa’s Zanu-PF will surely disagree, arguing that the new measures will aggravate the effect of existing Western sanctions which it blames for the parlous state of the economy. But Raab insisted the UK would continue to support the Zimbabwean people through its “aid programme, focusing on tackling poverty, humanitarian assistance, standing up for human rights and supporting Zimbabwe’s recovery from the Covid-19 pandemic”.

“None of this aid goes directly through Government of Zimbabwe systems,” Raab said.

UK officials note that Britain budgeted £139-million in the 2020/2021 financial year for this aid to Zimbabweans. They say trade between the two countries totalled £285-million in the 2019/2020 financial year. The trade agreement with Zimbabwe which the UK introduced after leaving the EU continues to allow Zimbabwe duty-free and quota-free access to the UK market, officials said.

“These sanctions target senior individuals in the government, and not ordinary Zimbabweans,” Raab said. “We will continue to press for the necessary political and economic reforms that will benefit all Zimbabweans.

“The UK’s autonomous Zimbabwe sanctions regime seeks to encourage the Government of Zimbabwe to respect democratic principles and institutions; refrain from the repression of civil society; and to comply with international human rights law and to respect human rights.

“These sanctions are in addition to our work to hold the Government of Zimbabwe to account in implementing genuine political and economic reforms that benefit all Zimbabweans.

“Contrary to claims by those who seek to stop institutional reform and respect for human rights in Zimbabwe, these sanctions will not deter investment into the country. Instead, UK investors repeatedly highlight three concerns that prevent them from investing in Zimbabwe: poorly managed currency; arbitrary property rights and the legal system,” Raab said. DM