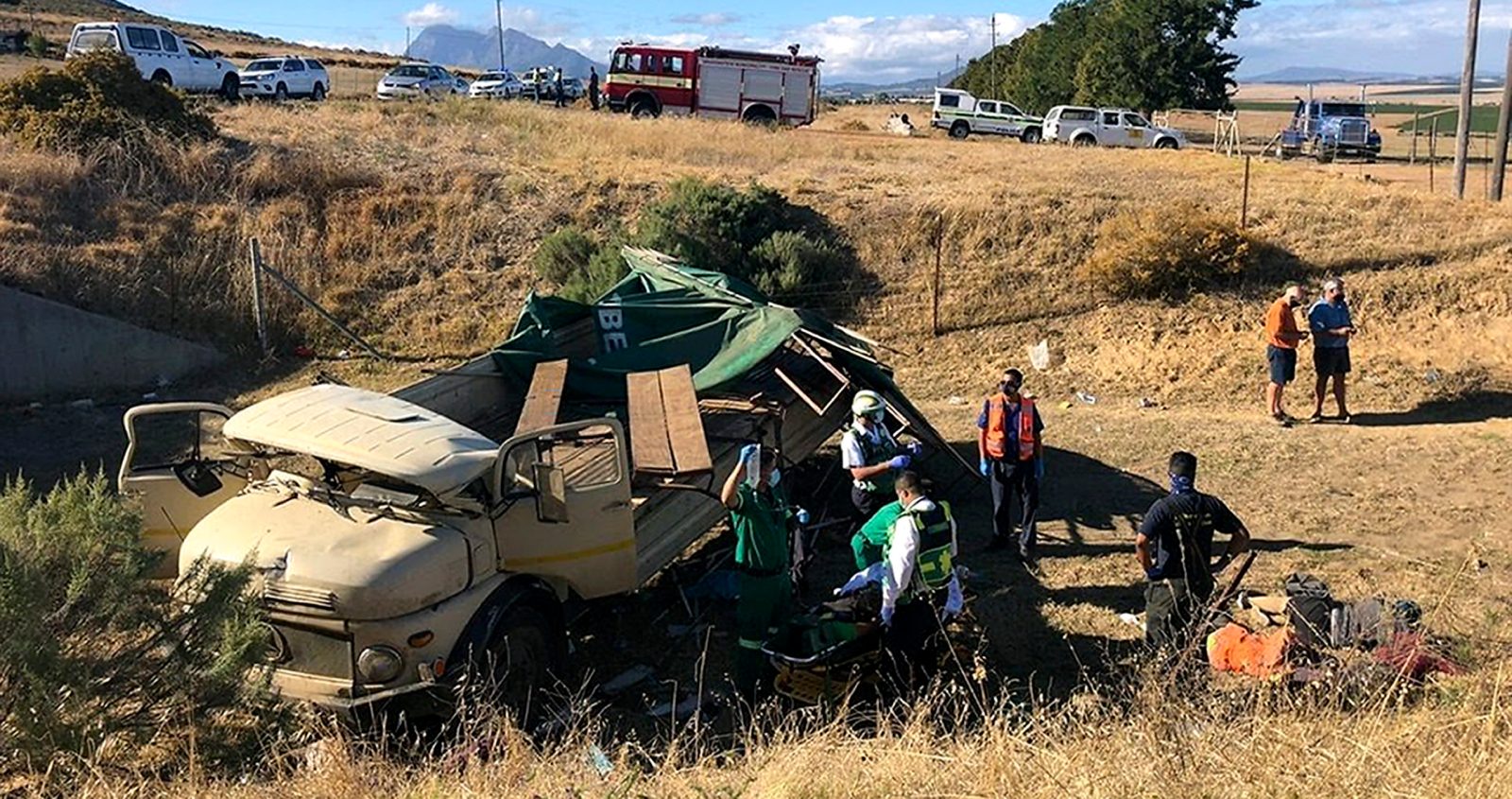 Several farm workers were injured when the truck transporting them was in an accident near Paarl on Wednesday, 27 January. (Photo: Drakenstein Farm Watch)

The Western Cape has a decades-long history of fatal accidents involving farmworkers being transported on trucks. Agricultural workers’ organisations are calling for tighter safety measures and alternative methods of transport, while provincial government wants a standing committee probe.

Three truck accidents involving farmworkers, that have claimed the lives of three people and left several injured, are a matter of grave concern and highlight a real threat to farmworkers in the Western Cape.

The accidents happened between Monday 4 January 2021 and Wednesday 27 January 2021. Nosey Pieterse, president of the Bawsi Agricultural Workers Union of South Africa, said the spate of truck accidents involving farmworkers was not something new.

“We had fights with the authorities and didn’t get answers from government, both national and provincial. It is important that the accidents be attended to, especially in the light of Covid-19. Only now people might come to realise that overloaded trucks are a real and serious threat to our people.

“Everything is a hotspot these days, but I think the hottest spot is on the back of that truck. People are forced to sit like sardines and many times a number of them don’t wear masks because of the heat generated by sitting so close to one another. They feel claustrophobic and take their masks off,” Pieterse said.

His comments come in the wake of the latest accident, which happened on 27 January, when at least 70 people were injured after the truck they were travelling in overturned on the R44 near Klapmuts in the Western Cape.

ER24 paramedics and Metro emergency medical personnel found the overturned truck on the side of the road with numerous injured workers, who had been riding on the back on the truck, lying at the scene of the accident.

On 4 January 2021 farmworker Doreen Frieslaar died and at least 13 people were injured when a truck driver transporting 37 farmworkers apparently lost control of the vehicle due to heavy rain on the N1, between De Doorns and Worcester in the Western Cape.

The crash was preceded by another accident the same morning involving another truck transporting farmworkers near Rawsonville in the Western Cape. About 12 people were injured in this accident.

The spate of accidents involving farmworkers has been condemned by both Pieterse and Wendy Pekeur, leader of the Ubuntu Rural Women and Youth Movement.

Thoko Didiza, Minister of Agriculture, Land Reform and Rural Development, has also called on all stakeholders in the sector to look into the issue of the transportation of farmworkers around the country.

In 2011, Pieterse led a campaign against what he referred to as the transporting of farmworkers to and from their places of work in “trucks of death”. At that time, several accidents involving overloaded trucks occurred. One involved 71 farmworkers and another incident involving 103, he said.

In November 2006 a total of 19 farmworkers died in an accident near Faure in the Western Cape when the truck transporting them collided with a train at a railway crossing.

In October 2007, traffic officials were shocked to find 103 farmworkers packed into the back of a windowless truck “like loaves of bread” without access to fresh air. The seasonal workers were travelling between Grabouw and a strawberry farm outside Swellendam in the Western Cape.

Also in November 2007, a Piketberg accident claimed the lives of 10 people and a further eight people were killed during a second accident De Doorns.

Pekeur emphasised that the Ubuntu Rural Women and Youth Movement had raised the issue of safer transport for farmworkers, especially the issue of overloaded trucks. Workers were packed on the back of trucks like sheep to a slaughterhouse, she added.

According to Pekeur, several agriculture organisations, unions and non-governmental organisations had engaged with government on the need for safer transport and unions had addressed this issue in collective bargaining processes.

To remedy the situation, she said, “a review to tighten safety measures must be done. Alternatives such as contracts with bus companies must be looked at. Vehicles that workers are transported in must be inspected and vetted.”

The Western Cape MEC for Transport and Public Works, Bonginkosi Madikizela, and the MEC for Agriculture, Ivan Meyer, jointly said that they had discussed the matter of farmworker transportation and were very concerned about the 27 January and other recent accidents.

Both are calling on the agricultural sector to take greater care to ensure the safety of farmworkers. “The safety of every person is of paramount importance,” they said. Following the recent accident, Meyer has requested the province’s Standing Committee on Agriculture, Environmental Affairs and Development Planning to look into the issue of farmworker transportation.

The MECs said: “Transporting agricultural workers on open trucks poses a significant threat to their safety. There is currently no law that determines the number of people to be loaded at the back of a bakkie or a truck.

“The only way to determine whether a truck is overloaded is through weighing it at the weighbridge, but that remains a challenge as body weight differs from the goods load that is usually transported by heavy vehicles.”

When an employer arranged transport for workers performing essential services such as farmworkers, it was imperative that no more than 50% of the licensed capacity of the vehicle was utilised. It was all-important that directives in respect of hygienic conditions and limitations of exposure to persons with Covid-19 be adhered to, they said.

The number of passengers allowed on a vehicle was limited by the maximum weight listed on the licence disc. While ensuring that the weight limit did not exceed 50% of the capacity, it was also important that there be sufficient space between workers to ensure protection, the MECs said. DM/MC