Land activists: Without the voices of communities, the Expropriation Bill will not go very far 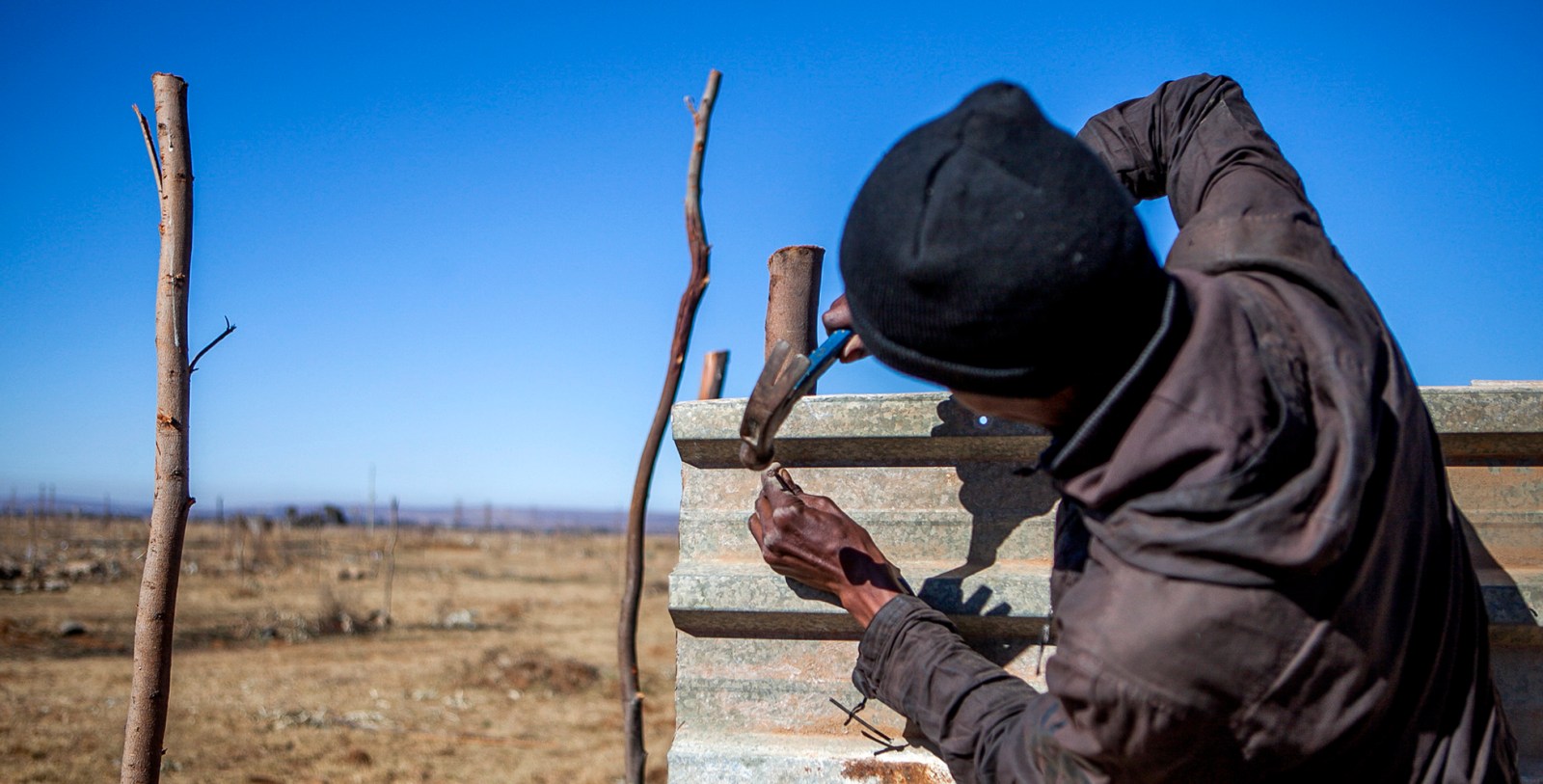 Communities have to have a say about what land needs to be expropriated, says activist Nomzamo Zondo. (Photo: Gallo Images / Sharon Seretlo)

Communities must have a say about which land needs to be expropriated and must be able to lodge objections on any intended expropriation. In this regard, an ombudsman could balance the dynamic between officials and communities.

On 30 January 2021, land activists Ashraf Mahomed and Nomzamo Zondo, hosted by the Tshisimani Centre for Activist Education, discussed South Africa’s Expropriation Bill in response to the question, “Will the state’s approach to the Expropriation Bill speed up land reform?” during a webinar series on the bill.

Mahomed, an attorney, pointed out that the matter of expropriation was not a new debate and referred those in attendance to two books. The first, The Seed Is Mine: The Life of Kas Maine, a South African Sharecropper 1894-1985 by Charles van Onselen, is the story of a man who worked the land for 30 years. The second, The Native Life in South Africa by Sol Plaatje, addresses the plight of black South Africans under a whites-only government.

Mahomed said these books were important because expropriation debates occurred within a historical context, and therefore discussing expropriation could not be done with an ahistorical view.

Section 25 of the Constitution was the enabling enactment of expropriation. However, expropriation could only take place in terms of the law of general application and could not be done arbitrarily, he said.

He reminded webinar attendees that the Expropriation Act 63 of 1975 was an apartheid-era law used with the racial motive of dispossessing black people of their land.

Mahomed quoted a judgment by Judge Fikile Bam in which he set out how this act was used to abuse vulnerable people. “The Expropriation Act was vulnerable to abuse since there was no obligation on the expropriator to state the specific purpose for which the expropriation was being made. There were many expropriations which at first appearance might appear to be completely innocuous, only to emerge to be serving racial interests under close scrutiny.”

Looking at the bill, Mahomed said that from his research it seemed South Africa’s compensation calculation was in line with that of Germany, Sweden, the UK, Ireland, Australia and Japan, and in accordance with the ConCourt ruling that there was evidence that market value was “the accepted standard for compensation”.

On the issue of compensation, Mahomed said that section 25, subsection 3 of the Constitution dealt with the issue of compensation under two “scenarios”, where money was payable on expropriation and agreement by the parties, which was relatively uncontentious. Where it did become contentious was when expropriation occurred without an agreement between the parties, which could then be referred to the courts to determine compensation.

He said the overriding principle on compensation in this section was, “it must be fair”, meaning that there had to be a fair balance between public interest and the affected parties.

It was a weakness that the bill gave powers and functions only to the minister of public works and not the minister of agriculture and land reform as well, particularly considering that there were elements of concurrent jurisdiction by both ministers that needed to be looked at, Mahomed said.

He noted that when interpreting the Expropriation Bill, there was a belief that the notions of land reform and protection of property were in conflict, which was not true.

The notion of land reform and redistribution “concerns the facilitation of access to land” for landless, i.e. poor people, labour tenants, farmworkers, women and emergent farmers in order to improve their income and quality of life, he explained.

Redistribution was not a legal or court-driven process, but fundamentally an administrative process guided by the policies of the department of agriculture, rural development and land reform for those whose needs were seen as the most pressing.

Redistributive land reform was largely based on the idea of willing buyer, willing seller. Government would assist in the buying of land, but wouldn’t necessarily be the owner of the land, and make land acquisition grants available to people.

“It is important to note that the Expropriation Bill seeks to repeal the 1975 act and to provide a common framework in line with the Constitution to guide the processes and procedure for expropriation of property by organs of state, and to provide for instances where expropriation with no compensation may be just and equitable,” he said.

Five instances were proposed where no compensation needed to take place:

He concluded by saying that South African law on expropriation was heavily influenced by English law and that it was important that the bill was developed within the South African context of property law “in accordance with its own indigenous character”.

Nomzamo Zondo, executive director of the Socio Economic Rights Institute, focused on what was missing in the bill and what she thought should be included if South Africa was going to achieve land reform and redress.

What the new bill had got right was that unregistered rights were now recognised, which had not been the case previously, she said.

The reason we find ourselves in our current position is because of government’s slow pace of land reform and its failure to – as stated in section 25 of the Constitution – contribute to an environment that ensured people’s access to land and secure land tenure, and, in the absence of that, comparable redress, Zondo said.

The bill had had no real engagement with the people who would become beneficiaries, which was a weakness.

“If this act is enacted into law tomorrow as it stands, it would give them [government] the very same powers they had. If they wanted to expropriate for housing, they could expropriate as municipalities, in terms of the Housing Act.

“They could first make an offer to purchase. If they can’t purchase then they would expropriate. They haven’t exercised that power, so how do we move from that?” asked Zondo

Unfortunately, she said, according to the current system we only had records of “who owns the land”, meaning that more than “60% of our population is not seen because they don’t own land and therefore they are not seen or catered for”. This needed to be addressed, because seeing everyone was key to making progress in land redistribution.

Zondo pointed out that part of the failure of redistribution had been corruption and inefficiencies. This was why people who had submitted restitution claims 10 to 20 years ago were still waiting – something that would need to be addressed by the bill.

This was the reason that transparency and monitoring of the bill needed to be discussed. Without this, the government could expropriate at will or “elite capture” could take place, where people with access to government ministers and officials with power would be the only ones benefiting.

Expropriation could not be activated by the government only. The citizenry needed to be able to activate it too, so there needed to be scope within the bill for this to come from civil society, allowing engagement between the people and the minister of public works, and later the minister of land reform, emphasised Zondo.

In order to make an accurate assessment of the problem and measure progress being made, we needed to see how many of our people were landless, she said. At the moment there was no data on this. For example, there were people living in informal settlements or backyards, or people unlawfully occupying buildings, who were not in official records.

The system needed to be able to record anyone with access to land and their rights – not only the owner.

Zondo said the first attempt at transparency Nomzamo had identified in the bill was section 26, which stipulated that for every intended expropriation, a notice had to be given to the minister of rural development, which was information meant to be made public by the ministry. However, this process was still too far removed from communities.

Communities had to have a say about what land needed to be expropriated. They also had to be able to lodge objections on the intended expropriation and be able to see the broader national picture, Zondo said.

“It doesn’t help us to have a bill that gives government power when we can’t hold it accountable.”

One of the suggestions being made was for an ombudsman who would be able to hear the voices of communities in relation to intended expropriation as a way to balance the dynamic between officials and communities.

“As long as the voices of communities are not included in the expropriation process, we are not going to go very far in terms of the bill’s intended purpose. That’s why we are so [motivated] when it comes to this bill… because 27 years later we haven’t moved very far,” said Zondo. DM/MC