Book review: How to Fight Inequality 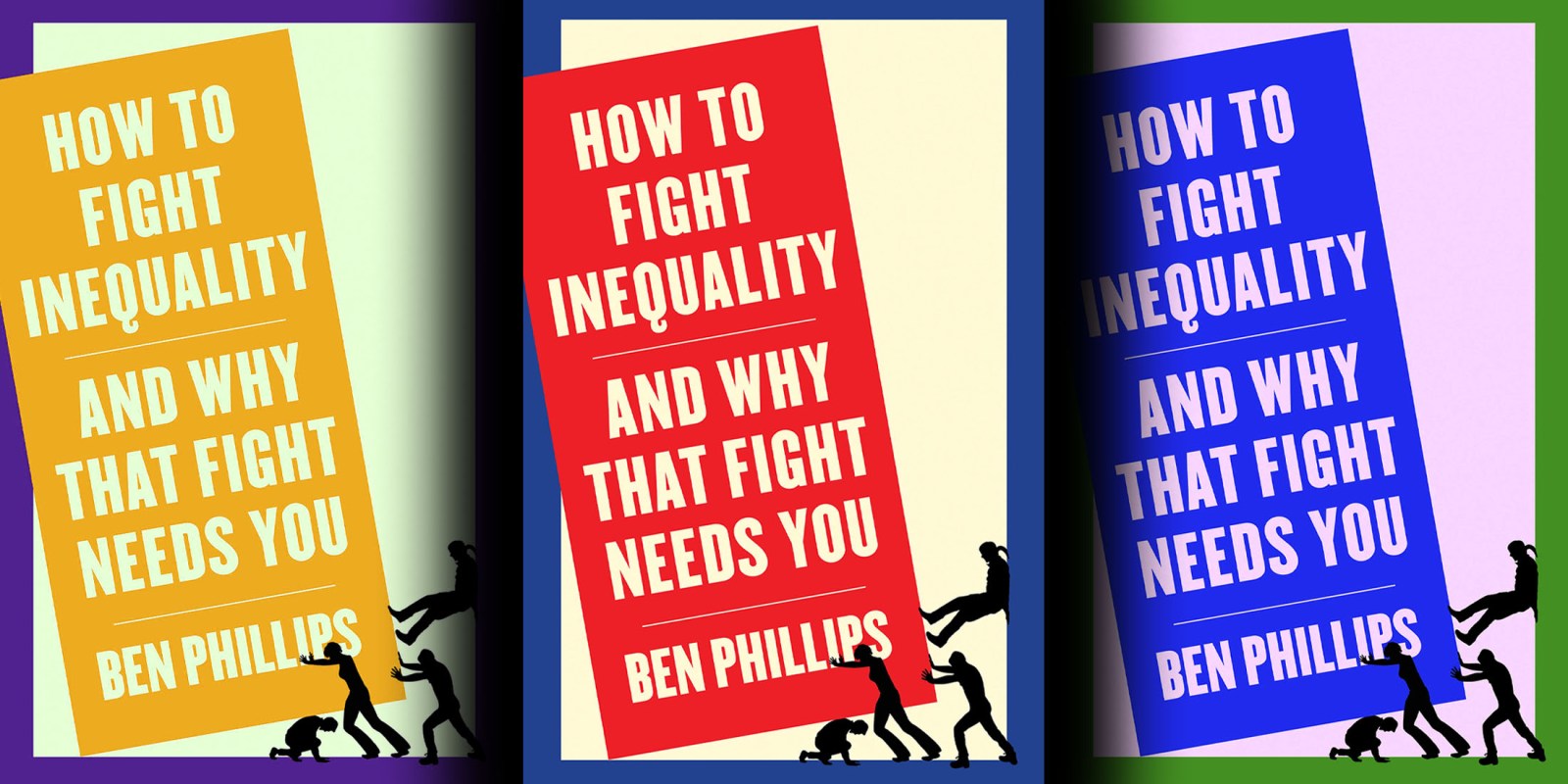 ‘How to Fight Inequality’ by international anti-inequality campaigner Ben Phillips aims to recruit ordinary people to engage in everyday organising to question the prevailing dystopian order… and then do something about it.

Ordinary people doing extraordinary things is a cliché if there ever was one. But Ben Phillips has spent most of his life thinking about, talking to and marching with such people, and is on a mission to recruit more of them to the cause. A cause, he argues, that is the defining one of our lives, the cause that should unite but too often divides. That cause, as per the title of his book, is How to Fight Inequality.

Covid-19 has unleashed a renewed anger with the state of inequality. The wealth of the richest 10 men on the planet increased by $450-billion over the past nine months – more than double what the UK government spent on tackling the pandemic and its fallout. Too little, too late it seems, as the international aid agency Unicef mounted its first ever mission to respond to hunger among British children.

The pandemic has revealed the “shielded rich” and the “exposed poor” in much the same way it has exposed the capture of the institutions of the state by those who continue to accumulate wealth at an astonishing pace. The contracts-for-friends scandals in Covid-19 supplies procurement have been exposed in countries from Kenya to the UK (where the term “chumocracy” has entered the lexicon).

Systemic political “influence” (corruption) over who makes the rules has led economists to predict a “K-shaped” recovery from the crisis, in which the rich become richer and the poor get poorer – exacerbating already historically high levels of inequality.

This is morally repugnant and – as even many rich people themselves are noting – unsustainable socially and politically.

Phillips’ starting point is that inequality is neither natural nor inevitable. He recalls periods in history, in countries across the globe, including in the US, when the social contract included higher taxes and a decently funded, redistributive state, with adequate safety nets that fostered fairness and mobility. He is at pains to point out that this state of affairs was neither inevitable nor natural. It was hard-won, as were struggles for human dignity down the ages.

The book is about how such struggles are won and what ordinary people can do to achieve victories in today’s gilded age.

It is all about power.

Phillips quotes Thucydides in the book’s standfirst: “The quality of justice depends on the equality of power to compel.” In an era of rising inequality, the ultra-rich and large corporations have consolidated their grip on rulemaking. For Phillips, change will not come from more evidence on the state of inequality, or from more evidence on what can be done about it, or even by using that evidence strategically to persuade decision-makers to enact the kind of policies that would lead to social justice.

For Phillips, the challenge is not presented as one of policy, but rather of politics.

Change will come through the organised restoration of countervailing power. “Social and popular will precedes political will.” And for Phillips, political will depends on the pressure of a people united. The object of that power is the redistributive state.

That power will arise from three actions every person is encouraged to take: overcoming deference to norms and interest which sustain the status quo (struggles have been built by “the awkward squad” with the courage to defy authorities); building power together by organising; and creating a new alternative narrative that displaces current ones that have normalised inequality.

Critical thinkers, such as Noam Chomsky (on hope), Antonio Gramsci (on discourse) and Edward Said (on connecting struggles), are invoked to support the arguments. Lessons are learnt, too, from FA Hayek and Milton Friedman on the right, as Phillips urges activists for equality to learn from those who beat them – “Don’t get mad, get even.”

This is intentionally not an academic tome – a more academic treatment could have built its argument around the ongoing interactions among ideas, interests and institutions that beget positive social change. Or it might have drawn on political and social theorist Steven Lukes to provide a more substantial look at the articulation of power by elites and the countervailing articulation of different constellations of power, as for example explored by Fran Baum and colleagues in their work Creating Political Will for Action on Health Equity: Practical Lessons for Public Health Policy Actors.

Some might read this book as a self-help guide for aspiring activists or those wanting to see the evidence for positive social change acted upon, but I don’t read its intention that way. It reaches beyond those who consider themselves advocates and activists to embrace ordinary people to engage in everyday organising to question the prevailing dystopian order and do something about it.

Historical leaders of various struggles, from Frederick Douglass to Mahatma Gandhi to Nelson Mandela make appearances, with Martin Luther King most prominent, not only for his moral voice but perhaps even more importantly as a strategist on organising.

The book also shares conversations Phillips has had with organisers from around the world. These include South African trade unionist Jay Naidoo, Filipino climate campaigner Yeb Sano, Zambian hip-hop star and activist PilAto, and the US’s Rev Liz Theoharis of the Poor People’s Campaign, who have all explored their learnings with Phillips.

But this is not a book about star leaders.

The strength of the volume, and a reflection of its thesis, is the ordinary people who populate the pages and bring the book to life. It is with these “amateurs” that Phillips has sung, danced, commiserated and, most importantly, organised. They include coconut collectors in Brazil who organised to win their right to the fruits of the forest against powerful (and murderous) landlords, people living with HIV in South Africa who secured the right to free antiretroviral medicines in the first successful major challenge to the ANC government, and workers from Senegal to Seattle who won increases in the minimum wage in the teeth of determined opposition from powerful business interests.

Stories of these encounters are interspersed throughout the book in a series of “journal entries” from what has been a kind of life on the road, in which Phillips has travelled, and settled for a time, in every continent, supporting campaigns and movement-building. Phillips speaks not only of what he has learnt from his interactions with his protagonists, but also of what he has “unlearnt”, as he reckons with coming to interrogate his own power and privilege.

He shares how he came to see that just as governments got it wrong in imagining that they were “giving” rights, so too the major NGOs that he helped lead got it wrong when they imagined that they themselves were the experts and drivers of change. What he learnt from experience was confirmed to him when he then looked back at history – transformative action against inequality has never been won for ordinary people, it has only ever been won by ordinary people.

One of the central tenets of the book is that the scale of power needed to tip the scale will only come from “fusion coalitions” – movements built by joining up issue-specific advocacy coalitions. This is no small ask (one thinks of how India famously has a myriad mutually antagonistic leftist parties). And one of the tactics seemingly deployed by those who benefit from the status quo is the sowing of the seeds of disunity among groups that might have been allies – would the women’s movement and the trans-rights movement achieve more success in dismantling the patriarchy if they united against a common enemy?

Phillips doesn’t provide an easy answer to this, other than seeing it as an urgent task in a long-term struggle – one in which people come to understand that their struggles for liberation are ultimately understood as being bound up in one another. It is about accompanying others on their journeys.

This book is an invitation to connect with the vibrant movements of our day. It is a lively inducement to jointly take action to generate the pressure (political incentives) needed from the ground up that will compel “good quality justice”. DM/MC

Professor Kent Buse is the director of the Healthier Societies Program at the George Institute for Global Health; professor at the Faculty of Medicine at the University of New South Wales, Sydney; and visiting professor at the School of Public Health, University College London.

How to Fight Inequality by Ben Phillips is published by Polity Press 2020 and can be purchased here.