From Zim, with Love: The Russian roulette of explosives...

From Zim, with Love: The Russian roulette of explosives smuggling 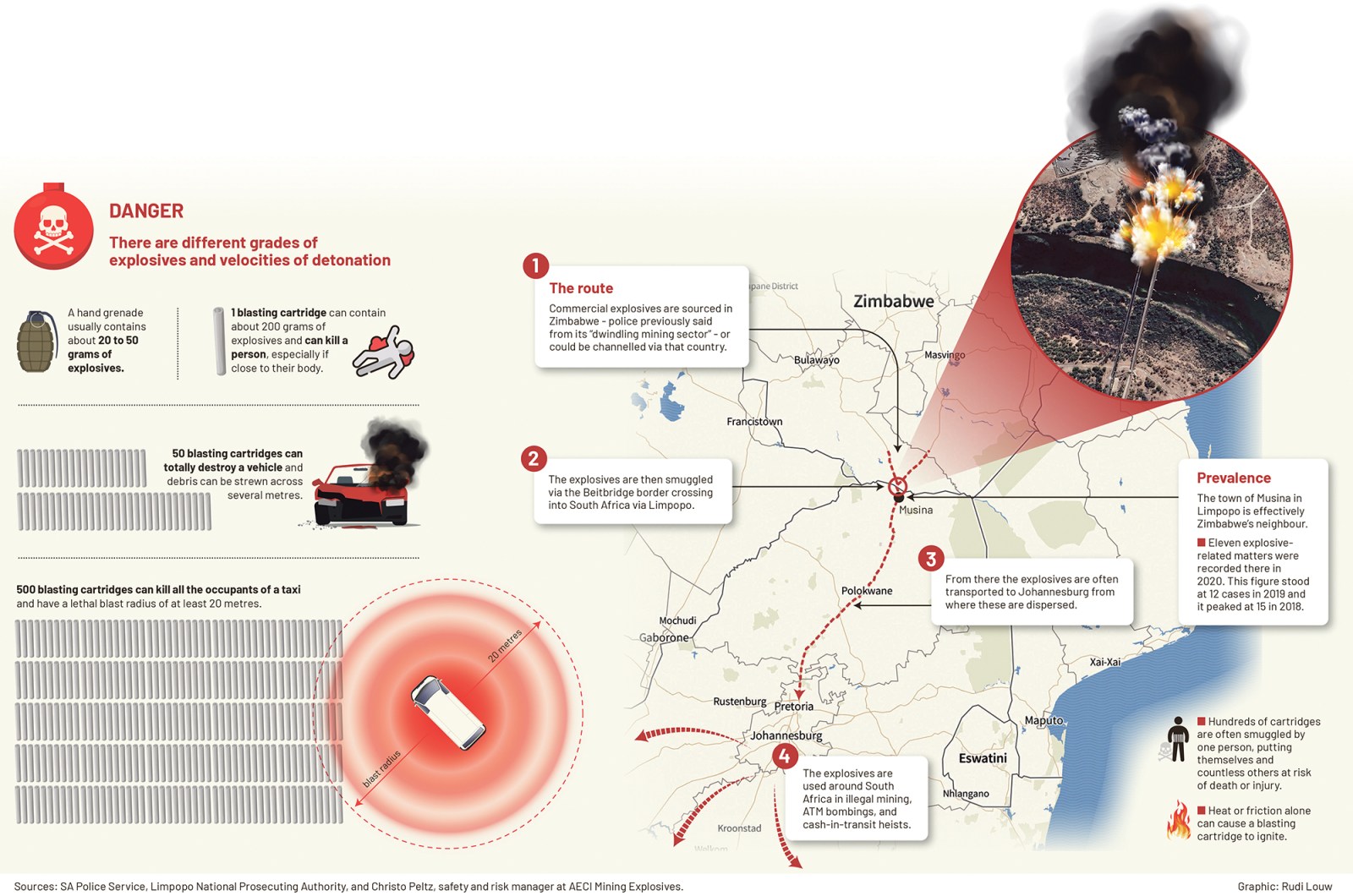 People could be killed by contraband explosives moved clandestinely from Zimbabwe to SA.

In early January, President Cyril Ramaphosa announced that South Africa’s land borders would be closed until at least mid-February due to the Covid-19 crisis. This includes the Beitbridge crossing between South Africa and Zimbabwe, a border that is exceptionally dangerous thanks to what some risk their lives trying to smuggle through it – explosives that could ignite at any moment.

Mercy Rifundo, a mother of four from Zimbabwe, farmed beans and occasionally travelled to Johannesburg, where she would stay, to sell her produce.

On 17 August last year, she planned to travel into South Africa, this time apparently under the impression she was also transporting floor polish in her luggage on behalf of people who knew her landlord in Johannesburg.

When she got to the Beitbridge crossing a boy helped her carry her bags across the border. Rifundo then made her way to a taxi rank and got into a vehicle bound for Johannesburg.

Unknown to those around her, had her luggage been jostled a certain way or had the contents rubbed together in a particular manner, several people could have been instantly killed and others maimed.

This is because Rifundo had 496 blasting cartridge units in her luggage. Just one of these is enough to tear open a safe or kill someone.

The type of explosives discovered in her bags are often used in crimes, including ATM blasts, cash-in-transit heists and illegal mining, and could be from operations – illicit or legal – linked to mines in Zimbabwe.

Rifundo later claimed to be an unwitting explosives mule, but the severity of the crime she was part of was so extreme that the 42-year-old first-time offender is now serving a 15-year jail term in South Africa. This sentence was handed down earlier this month in the Musina Regional Court.

The case against her has emphasised the extreme risks that explosives smugglers – who often carry dozens, even hundreds, of blasting cartridges at a time – pose to those around them.

Christo Peltz, the safety and risk manager at AECI Mining Explosives, explained that, although there are different grades of explosives, a single blasting cartridge could contain 200 grams of explosive and easily kill someone if it was kept close to their body, and 50 could destroy a vehicle; 500 could wipe out the occupants of a taxi and have a “lethal blast radius” of 20m.

Limpopo’s acting Hawks head, Angie Matlabe, referring to the Rifundo case, said: “We are determined to fight all types of organised crime in our country, including transnational crimes.”

National police spokesperson Vish Naidoo said officers tried to monitor South Africa’s points of entry and exit. “We are responsible for the control of the illegal movement of people and goods at all identified ports of entry (sea, land and air), simply meaning conducting classical policing in a border control environment,” he said.

Earlier this week Daily Maverick published an Institute for Security Studies article, by Richard Chelin and Willem Els, that warned: “The unsafe transportation, storage and use of explosives by criminals is a disaster waiting to happen.”

It also said that the police, the lead regulator in terms of explosives in South Africa, were making use of an outdated Act “and the police minister should sign and promote the new explosives regulations”.

“Although the Explosives Act was approved by the president in 2003, it is yet to come into operation. This presents a major problem for law enforcement.”

Yet the police have been pushing ahead with arrests.

Every year, several explosives smugglers are intercepted at or near the Beitbridge crossing. During Rifundo’s trial it was heard that 11 explosives cases were reported in Musina in 2020, 12 in 2019 and 15 in 2018.

The state believed court sentences handed down to smugglers were acting as deterrents to potential illegal explosives transporters, hence the number of related cases had decreased. It is not clear, however, whether Covid-19 lockdown restrictions were taken into consideration when assessing these figures.

According to the state, in Rifundo’s case, she was arrested when police officers from South Africa stopped the vehicle she was travelling in from the Beitbridge border and searched its boot. This was when they discovered the explosives in her luggage.

In February 2019, Nqobizitha Ncube was also sentenced to 15 years in jail for trying to smuggle explosives from Zimbabwe to South Africa. The 30-year-old had been arrested on 26 September 2018 with two others, who went on to be acquitted.

Rifundo was charged under the Explosives Act as well as the Immigration Act – she had no passport on her at the time of her arrest.

She initially pleaded guilty to the charges but then, during proceedings to see if the sentence against her should be reduced, she claimed she had not known she was transporting explosives, but thought she was simply carrying floor polish for people in Johannesburg.

In argument that Rifundo deserved a stiff prison sentence, Maria Makushu of the police’s bomb disposal unit testified that “the crime committed is serious in that the vehicle utilised to transport the explosives was not a vehicle designed for such and that explosives [are] sensitive to heat and friction and could with the mere bump in the road have exploded”, according to a document on the court case provided by the Limpopo National Prosecuting Authority.

“She testified that the kind of explosives [are] used in South Africa for illegal purpose[s], ATM bombings, cash-in-transit heists, illegal mining, and indicated that a single blasting cartridge can rip open a safe or kill a person.

“The State further argued that, with Beitbridge being the second largest port of entry [which] multiple people frequent on a daily basis, also considering the amount of vehicle[s] and infrastructure, it was a serious offence. Taking into consideration that friction or heat can cause a blasting cartridge to ignite on its own, which would cause the rest of the 495 blasting cartridges to also ignite, this case must be considered as extremely serious.”

It was effectively found that, in transporting the explosives, Rifundo had “risked the property and livelihood of all people that frequented the border”. The fact that she had four minor children was not enough to reduce her sentence. Rifundo was sentenced to 15 years’ direct imprisonment, and was additionally fined R20,000, or six months in jail, for being an illegal immigrant.

The prison sentence imposed on Rifundo, even as a first-time offender, is not unusual.

In February 2019, Nqobizitha Ncube was also sentenced to 15 years in jail for trying to smuggle explosives from Zimbabwe to South Africa. The 30-year-old had been arrested on 26 September 2018 with two others, who went on to be acquitted.

Ncube had pleaded guilty to the charges she faced, relating to explosives worth R200,000 found in her car.

“In aggravation of sentence the state prosecutor, Patricia Dorothy Jacobs, emphasised that the offence was serious with 15 years’ imprisonment sentence for a first offender,” said a statement issued by Mashudu Malabi-Dzhangi, the Limpopo National Prosecuting Authority’s spokesperson.

“She also pointed [out] that the offence was prevalent in the border post of Limpopo … She referred to the evidence of … an explosives expert who earlier testified that the kind of explosives were used in commission of ATM bombings and cash-in-transit offences.”

Other similar smuggling crimes date back several years. In November 2013, Elita Sibanda was sentenced to eight years in jail for trying to smuggle explosives into SA the previous month. She was 23 years old at the time.

“While busy searching the suspect’s luggage, members discovered 26 plastic cartridges and 100 detonators,” a Hawks statement on her conviction said. “She indicated that she bought the explosives from a shop in Harare and that she was transporting [them] to South Africa with the intention to sell the devices to illegal miners.”

Earlier this month DM168 reported on how illegal mining in SA added to the problem of international smugglers using SA as a transit point to sneak illicit gold into one of the world’s most prolific players in that industry, Dubai. The smuggling of explosives from Zimbabwe adds another link to this chain, further entrenching SA in global organised crime networks. DM168