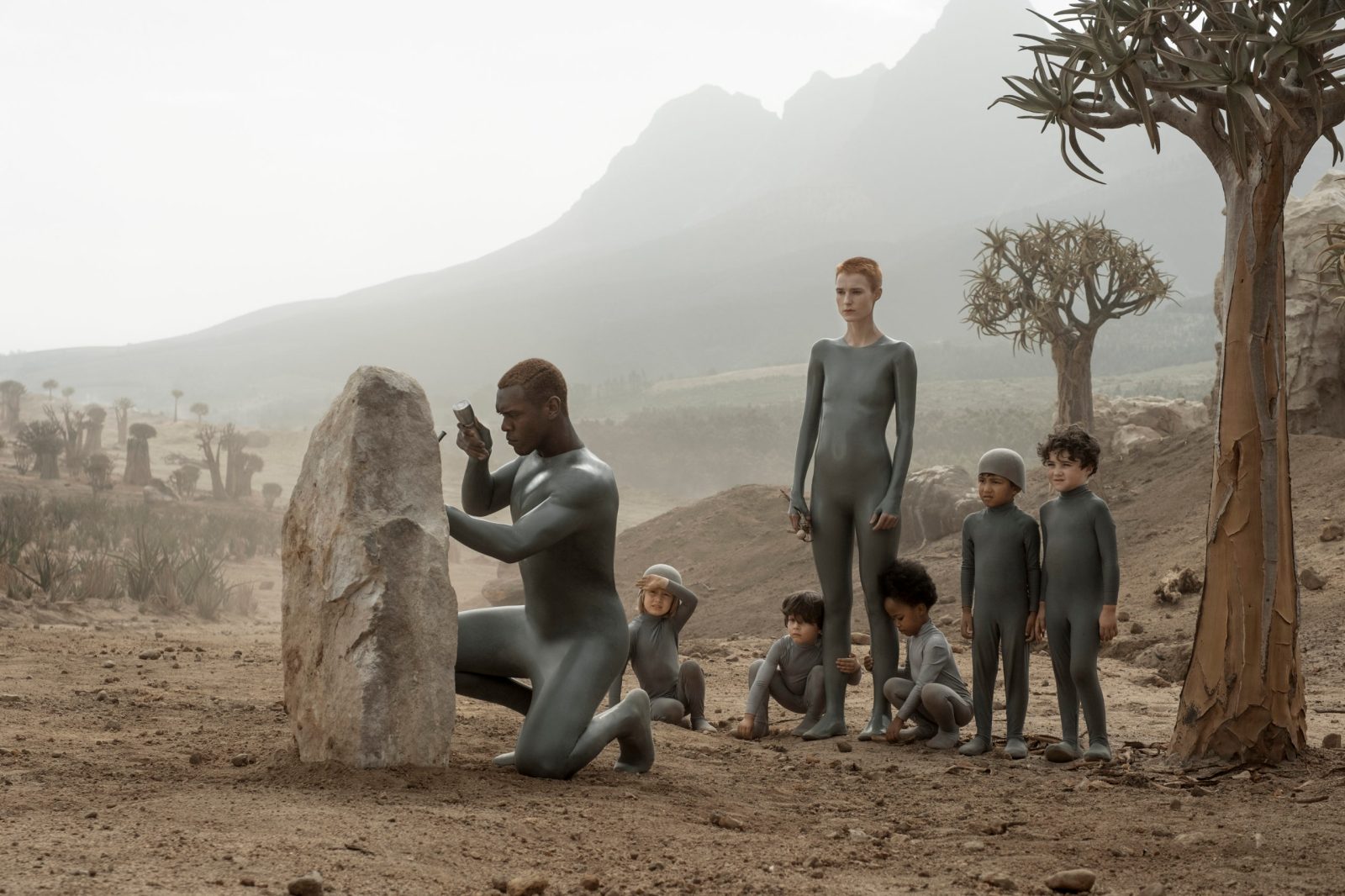 In 1979, Ridley Scott directed Alien, still considered by many to be the greatest sci-fi horror ever made. Over and above being a gripping, blood-curdling film, Alien’s emblematic imagery has been vivisected and scrutinised through every psychoanalytical lens, in search of hidden meanings and allegorical wisdom.

Rather than compete with the legendary status of his own masterpiece, Scott took a 33-year hiatus from sci-fi horror, and when he returned with Prometheus in 2012 and Alien: Covenant in 2017, they just weren’t the same, relying too heavily on CGI to dazzle his audience.

So in 2020, Scott took another crack at it – Raised by Wolves, a 10-part sci-fi series created by Aaron Guzikowski which airs for the first time in Africa on Showmax, on Monday, 1 February.

Raised by Wolves is not quite a return to the sci-fi horror of the Alien franchise – with little more than a peppering of soft-core body-horror, it’s more of a slow-burn suspense thriller. But it is proudly sci-fi, boasting all the classic science fiction tropes: a self-destructing technocracy, a nuclear apocalypse, interspecies warfare, rogue androids and, of course, creepy scuttling aliens (this is a Ridley Scott production after all).

Earth is dead, annihilated in the fires of war between atheists and religious, sun-worshiping zealots, the Mithraic. In an attempt to preserve their species and knowledge the atheists have sent two androids and a dozen box-growable embryos to Kepler-22b, a desolate but habitable planet orbiting a distant star. But the Mithraic have sent arks of their own…

South Africans might not find the familiar landscapes of Kepler-22b as menacing or as alien as they’re intended to be – Raised by Wolves was filmed in the Cape Town veld – but everything else is successfully bleak. The music is eerie and suspenseful, the colour pallet is muted with grey, and even the child characters are permanently severe (though one could hardly blame them considering the circumstances).

In spite of all this gloom, the series is never dull. The two androids, Mother and Father, tasked with raising human children in a mysterious world, make us interrogate what it means to be a parent and what it means to be human. Rather than acting purely based on logic, Mother and Father appear to have been programmed with a strange mimicry of human love, presumably intended to properly socialise the children. This inevitably induces a quintessential internal conflict between programming and human error, performed with terrifying finesse by Amanda Collin.

Even juicier are the questions posed about the function of religion in society, a popular anthropological debate in science fiction. On the Mithraic ark the children are indoctrinated with the same non-falsifiable rhetoric as that of extant religions: “God helps those who help themselves. He is testing us!” But when things get tough the children question God’s existence.

Conversely, in the atheist colony, Mother and Father forbid the children from religious belief or prayer: “Belief in the unreal can comfort the human mind, but it also weakens it. We will never advance unless you resist the urge to seek solace in fantasy.” But when things get tough the children are instinctively drawn to it. This duality suggests a flaw in the language we use around children and religious belief. We should not speak of atheist children or religious children. To prescribe a belief to a person before they have access to the information and the capacity to make up their own mind about it is wrong.

The children’s struggle to work out what they believe is an atheist’s perspective of the battle against our own programming as a species. It was homosapiens’ ability to understand and communicate abstract concepts and myths that enabled us to outlast (or eradicate) the other human species that inhabited Earth. It is in our nature to construct religious, cultural and nationalistic myths to rally behind, thereby increasing our chances of survival. Humans are the only species we know of that makes conscious attempts to act against its “programming”, but our tendency towards unifying myths is hardwired deep into our genetic memory. If you consider myth-based communities like QAnon, the Trump voter base, racists, or any religious fundamentalist group, Guzikowski’s notion that our inability to reprogramme ourselves might be our downfall is not so far-fetched.

In each instance of “us versus them”, whether logic versus faith, organic versus mechanical or human versus alien, Scott sets the two sides against one another equally. Both are flawed, both are wrong and both are deserving of sympathy. But here’s the kicker: Scott only directed the first two episodes. The third and fourth are directed by his son, Luke, and there is a noticeable decline in their direction. Scott Jr tends towards crowd pleasing – characters become one dimensional and we steer closer to an archetypal clash of goodies and baddies.

The themes that the series explores, while topical and controversial, are well-trodden sci-fi motifs, and because of the directorial switch after the second episode, the questions the show asks early on are more profound than the answers it gives later. Ridley is still the executive producer so we cannot dump all the blame on the other directors.

Raised by Wolves was not the big comeback that we (or Scott himself) were hoping for, but coming from Prometheus and Alien: Covenant, it was a step in the right direction. Collin’s spooky performance as Mother is reason enough to give it a chance. It should be sufficient to scratch your sci-fi itch, and if you make it to the end you’ll be treated to a finale so baffling that you’ll instantly be itching for season two by virtue of sheer curiosity. DM/ML

Raised by Wolves is available for screening in South Africa on Showmax from February 1.
You can contact This Weekend We’re Watching via [email protected]