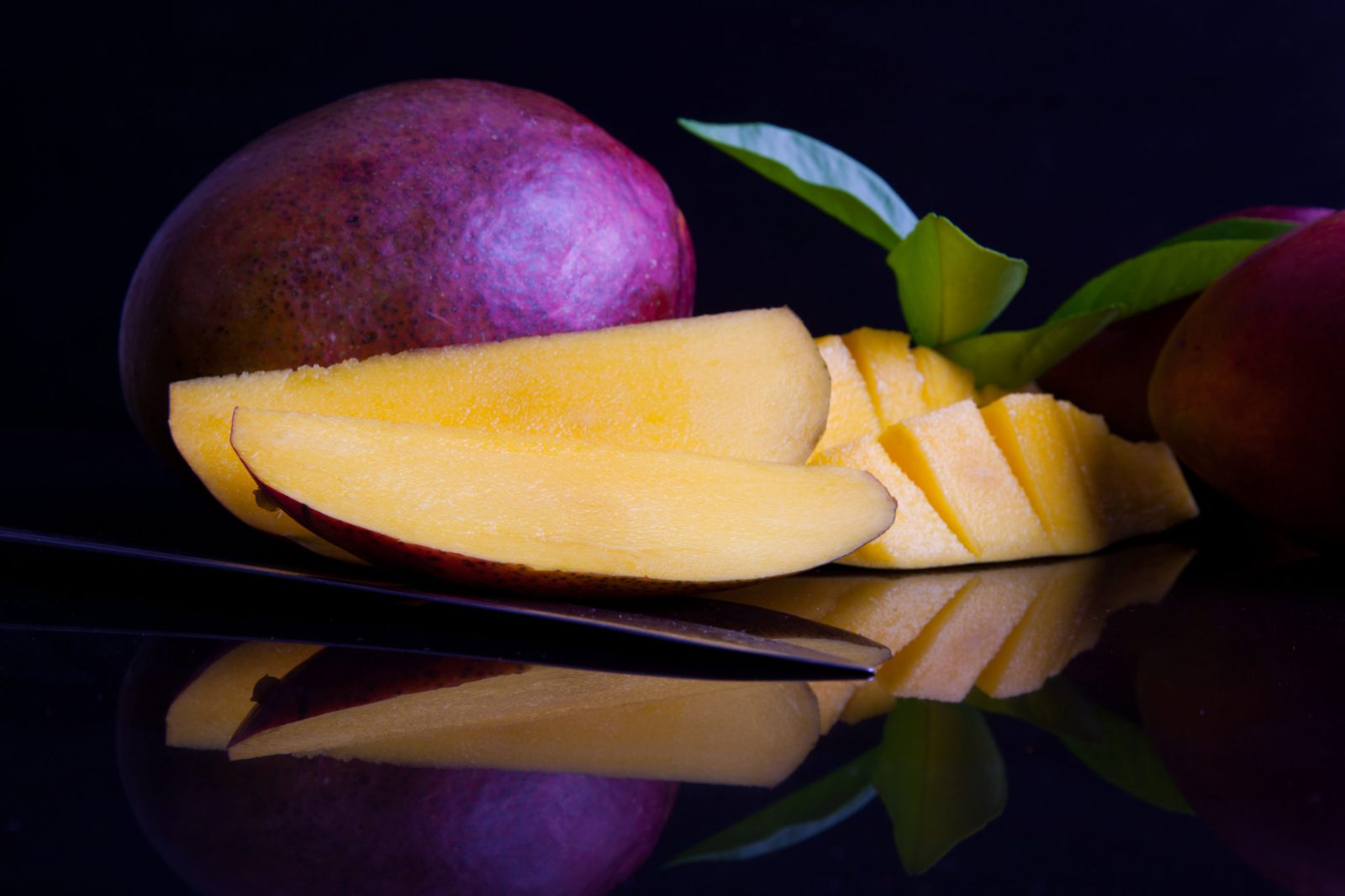 Food of the Gods, symbol of fertility, love and wealth, beloved of Buddha, celebrated in design. Behold the mighty mango.

What ingredient can you use in a curry, a smoothie, a salsa, a rice pudding, a salad, a lassi, a chutney, a savoury fish or chicken dish and a cocktail? Why, mango, of course.

Mangoes sing of summer and sunshine and are a perfect salve for these hard times when we’re in search of anything that will lighten and sweeten our days. The mango is a drupe, like olives and cherries, and a member of the cashew family. But if you’ve ever seen what a cashew actually looks like when it’s still growing on the tree (one of nature’s truly bizarre little tricks) you’ll see the sense of it instantly. (The inset picture below is, yes, cashews, not green mangoes.)

They’re also related to pistachios. And if you’ve ever wondered why some parts of a ripe mango are bright red, others yellow or orange, and other parts green, that’s only a result of the riper part being exposed to more sunshine, and others less. So some parts of a mango will always be a little sweeter.

Mango experts, however (there are such people), say that the colour does not say anything at all about the ripeness within, and that we should look for a smooth but leathery skin, never wrinkled. But rather use the French test: sniff the stem end, which should smell sweet.

The United States has a national mango board (yep, you can buy a semi-automatic machine gun in the supermarket when you buy your macaroni and eggs, but mangoes have their own control board), but they have a board for everything: there’s a lamb board (which is weird, because Americans hardly ever eat lamb), a peanut board, a hass avocado board, a honey board, a “mushroom council”, and even a popcorn board. Yes, really.

But mangoes came to America (a massive producer of them today) from far, far away in India, and is the national fruit of India, Pakistan and the Philippines and the national tree of Bangladesh. But here’s my favourite new fun fact: I love design, especially art deco and art nouveau, and one of my favourite designs is paisley, the gorgeously swirly Indian pattern which is based on the shape of the mango. A perfect reason to celebrate paisley by making a tall glass of mango lassi (yoghurt drink) to cool you down under the hot southern sun.

Buddha is believed to have meditated under the shade of a mango tree, the leaves, flowers and fruit of which appear in Hindu and Buddhist temples in India, where the mango originates. JC Snyman, for South Africa’s Agricultural Research Council, writes that the “great Mogul emperor Akbar” had an orchard of 100,000 mango trees. The fruit was also cultivated in the Philippines, while the Portuguese introduced them to Brazil as early as 1700, from where mangoes moved via the West Indies to Florida over a century later.

And that trajectory makes all sorts of sense; they’re just the sort of cultures where you’d expect mangoes to be a part of the national cuisine. But mangoes came to the Cape before they even reached Brazil, brought by the Portuguese, according to some sources, although Snyman informs us that Jan Van Riebeeck himself planted mango trees at the Cape in 1653, within a year of his arrival. But that was a failure, and no surprises if you guessed that, given the Cape’s weather.

Southern Africa’s geography is extremely diverse, however, and Snyman cites speculation (he does not call it evidence) of mangoes growing in the then Natal colony before the 17th century. There is evidence however of mango trees growing in the colony by 1860. By 1920 they were being cultivated in our northern provinces.

But let’s not take anything away from its origins in India, where the mango is celebrated in folk songs including those sung at weddings, sometimes sweet and romantic, sometimes suggestive, with lascivious lyrics including “the mango has ripened”.

Every July, India has a national mango day, and an international mango festival is held annually in Delhi. And if you want to make a new friend in India, that’s easy. Just give them a basket of mangoes. DM/TGIFood