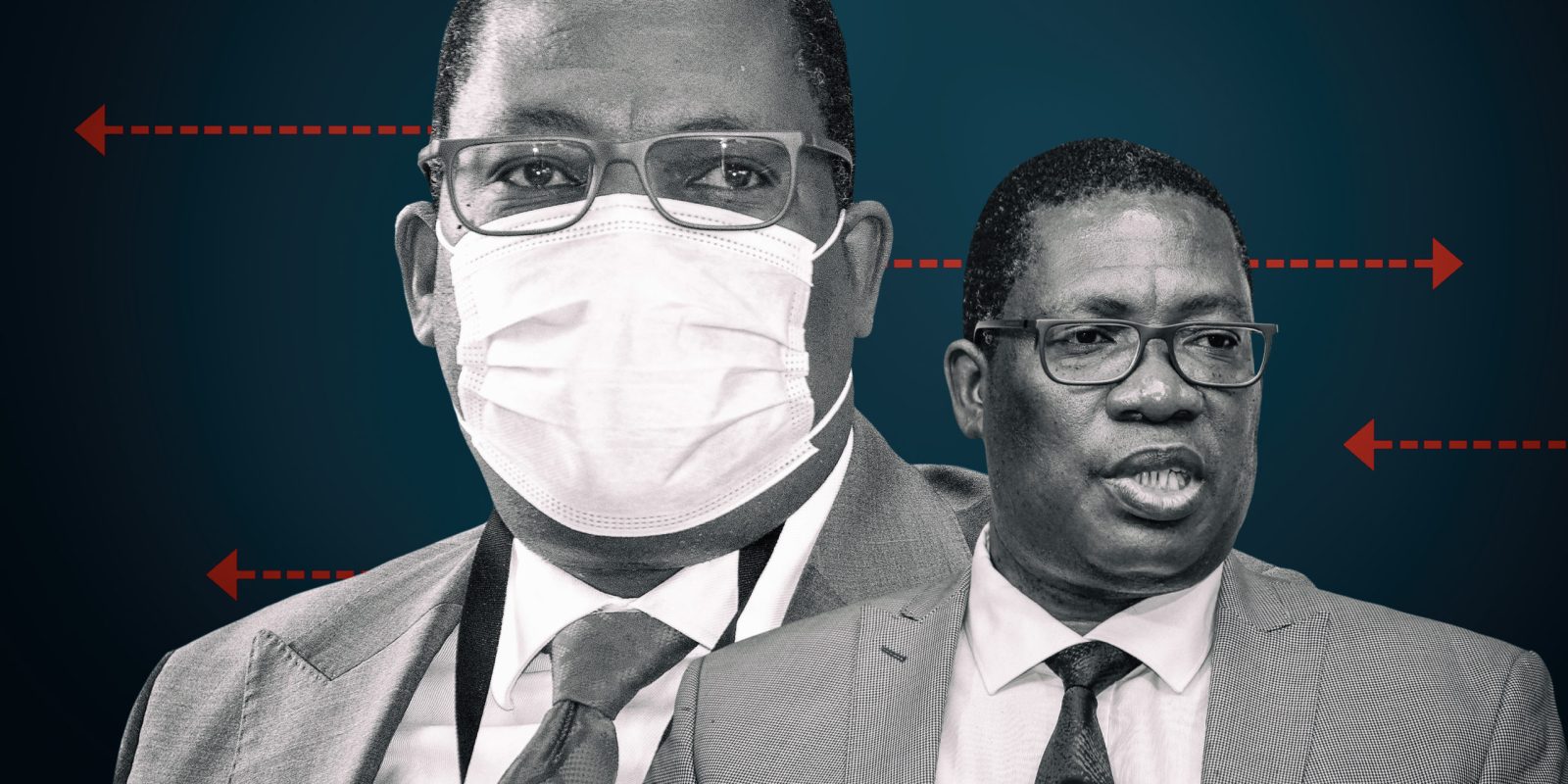 The latest revelations about alleged corruption in the Gauteng provincial government, this time in the Department of Education, may have long-term consequences for the politicians involved. In particular, Gauteng Education MEC Panyaza Lesufi is under intense pressure.

Gauteng Education MEC Panyaza Lesufi has a long track record in the Gauteng Provincial Government. But he may also have long-term ambitions that could rest on whether Premier David Makhura finds himself called to national office, and on whether he himself survives the corruption scandal that has hit his department.

The Maverick Citizen revelation that Lesufi’s department spent R431-million on sanitising schools unnecessarily is one of the biggest corruption claims the Gauteng Education Department has faced.

As in other provinces, Gauteng’s education department is one of the biggest spenders, and a great deal of the money spent goes to pay the salaries of teachers. As salary levels are set in stone by national negotiations, or they were until last year, the provinces don’t have much discretionary space in spending their education budgets.

Now, things may be different. The latest scandal is an example of what happens in a provincial education department when there is discretionary funding available, this time for Covid-19 response.

A number of companies were paid to provide a “sanitising” service, with an apparent lack of records of what they actually did. This suggests that the discretionary money was at best spent irresponsibly, contrary to the national government’s clear directive, and at worst, it was stolen.

The track record of the Gauteng Provincial Government, after the alleged corruption in the Department of Health at the start of the pandemic, suggests that many were waiting to make money from the worst calamity in a generation.

This combination of incompetence and greed could have huge implications for Gauteng politics.

The ANC narrowly won the province with 50.19% of the vote in 2019. It will have to face voters in local elections later this year (presumably) and as a province in 2024. It is likely that voters are going to have this issue of corruption uppermost in their minds when casting their ballots.

And it should not be forgotten that in 2016 the ANC fell below 50% in Johannesburg, Tshwane and Ekurhuleni, where it was able to keep power only through a coalition with the African Independent Congress.

The corruption scandals undoubtedly weaken the ANC even further, even as the opposition parties are struggling to an extent. Certainly, they would diminish the case to vote for the ANC.

But the latest scandal could also have long-term implications for the leadership of the provincial party.

Lesufi is both Education MEC and the deputy chair of the ANC in Gauteng. If Makhura were to move to a higher position, Lesufi would be in prime position to himself move up, and ultimately to become provincial premier.

Makhura is already in his second term. Such is his reputation for personal probity that he could be encouraged to campaign for a national position.

It is likely that corruption will remain a major political issue for the foreseeable future. Should President Cyril Ramaphosa no longer be available for national leadership, or should space magically appear in the top six national positions of the ANC (if, for example, the secretary-general were made to “step aside”) then the person who would take over would need to have a reputation for honesty and for being corruption-free.

Makhura is one of a small number of people who could conceivably occupy such a position; the other candidate in such a situation would of course be the Health Minister, Dr Zweli Mkhize.

This would open the way for Lesufi to move into the Gauteng premier’s chair.

One of his major strengths is his ability to use the media better than any of his apparent rivals.

Education reflects the problems in our society, which is why SA schools often have issues around inequality, lack of proper sanitation; language, race and entrance policies, and violence.

Many journalists talk of his warmth and his ability to speak sense under pressure. He can spin a story well and knows how to defuse a difficult situation and to make it work for him.

Once, after a private school was accused of having different classes for children of different races, he put intense pressure on the school’s management. But he also then offered to face the media and apologise on the school’s behalf. It is likely that the management of that school was grateful to him for doing so, considering the circumstances.

When learners hold protests against issues at schools, he has the ability to hear them out, but also to insist that they go back to class and obey their teachers’ instructions.

And very few people can manage a situation when a child dies, of being able to empathise with the parents and family and manage officials who may have failed in their duty of care.

However, Lesufi may have a populist streak that could cause him to damage further down the line.

In January he conducted a series of interviews claiming that independent schools were breaking the law by opening after the Basic Education Department said government schools would delay their reopening until 15 February. He also claimed that he “sensed danger” when one school reopened for physical learning.

In fact, these schools were not breaking the law. The national department itself had said, just several days before, that it does not have the legal power to close those schools. It was only after the national government gazetted certain regulations that the independent schools were closed.

It may also have been wrong for Lesufi to claim that he “sensed danger”. While the decision to open or close schools is perhaps the most highly contested governance decision of the pandemic, the SA Paediatric Association has said the decision to keep them closed “was not grounded in science”. Along with the SA Human Rights Commission, it believes children are safer in schools than outside them.

This populist streak has deep roots with Lesufi.

In 2004 he was accused of whipping up sentiment in a controversial case while at the Gauteng Department of Social Development.

Two Taiwanese-South Africans, a brother and sister, were accused by their domestic worker of forcing her to have sex with their dog. Lesufi kept the story alive in the media and created a trust fund for her. In the end, it turned out that she had lied and the case was thrown out of court.

The two siblings then said they had been treated in this way because of anti-Taiwanese racism and that they would sue the National Prosecuting Authority for continuing with a case when it was obvious the charges could not be substantiated (the court heard expert evidence that a dog cannot have intercourse with a human).

Lesufi publicly criticised the decisions made by the magistrate even when it was obvious there was no case for the accused to answer.

For the moment, Lesufi’s main aim may be to find out who was responsible for the alleged corruption in his department. He will be very aware of how Dr Bandile Masuku had to leave the position of Health MEC and how he could end up in the same situation. He would obviously want to avoid this.

Especially because it would seriously damage his longer-term prospects. DM