Patient Fawad puts Pakistan in a commanding position as... 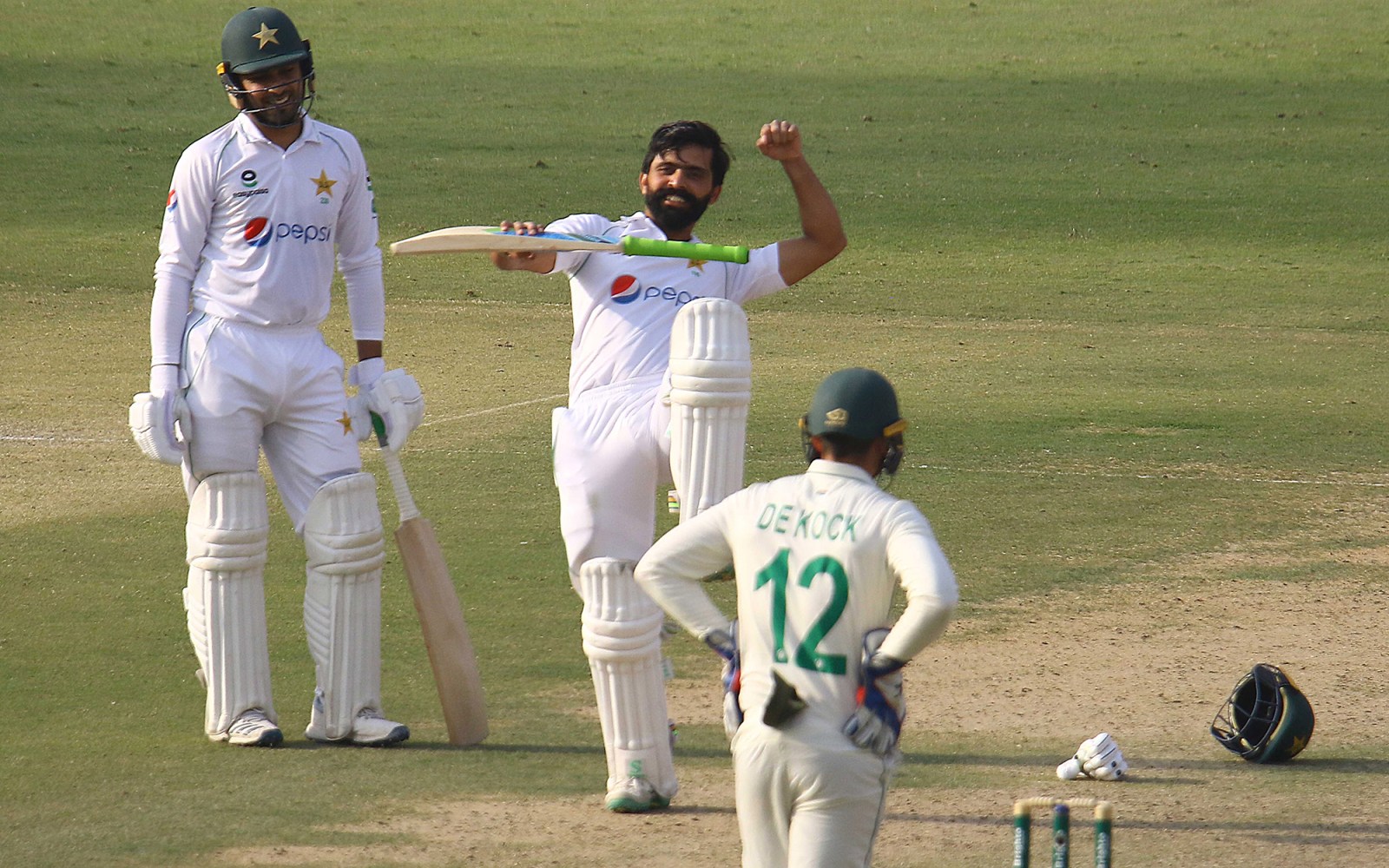 Pakistani batsman Fawad Alam celebrates his century during the second day of the first cricket Test between Pakistan and South Africa in Karachi on 27 January 2021. (EPA-EFE / Shahzaib Akber)

If the Proteas edged day one, it was Pakistan’s batsmen that dominated the second day of the first Test in Karachi on Wednesday, leaving the home side in a strong position on a deteriorating pitch.

Fawad Alam might have the most unusual stance in cricket, but aesthetics are irrelevant when you make batting look as comfortable as he did on day two in Karachi.

Fawad scored his third Test century as Pakistan moved to 308 for eight at the close of play – a lead of 88 after South Africa were bowled out for 220 on day one.

The National Stadium in Karachi is 35-year-old Fawad’s home ground and a place where he revels in batting, averaging 69.97 in first class cricket at the venue. It was no different against the Proteas.

He came to the crease on the first evening with Pakistan reeling at 27 for four. Along with Azhar they took the home team to the close on day one precariously positioned on 33 for four.

South Africa knew that an early wicket on day two could expose the lower middle order while the bowlers were still fresh. Fawad and Azhar ensured that never happened, carrying their bats through the entire first session. When lunch was called Pakistan were on 104 for four and South Africa’s heads were dropping.

After the meal, the Proteas managed to remove Azhar for 51 with the score on 121, caught sharply by wicketkeeper Quinton de Kock off Keshav Maharaj’s slow left-arm. Azhar, having gone to his half-century four balls earlier, tried to cut a delivery too close to his body and succumbed.

But the breakthrough didn’t signal a collapse by Pakistan. Instead, Fawad renewed his resolve and received good support from Rizwan (33) and Ashraf (64) as the home team piled on the misery.

It didn’t help that De Kock used up his team’s three reviews on speculative dismissals and the skipper later dropped Ashraf to add to his miserable day. De Kock’s woes aside, nothing could detract from Fawad’s contribution.

Rather late than never

Fawad was the glue and the only mystery is how the Pakistan selectors have criminally overlooked him for the bulk of his best years.

He made his Test debut in 2009, scored a century on debut against Sri Lanka and played two more Tests before being dropped – for nearly 11 years. He was only recalled against England in 2020, but in the interim scored 7,965 first-class runs, including 26 centuries.

His return to Test cricket against England was painful as he made ducks in both innings in the first Test in Southampton and only 21 runs in the second Test. But a battling century in New Zealand against the Black Caps last month preceded this effort on his home ground.

“I’ve never blamed anyone,” Fawad told the media after the game. “I have always been saying that fate had this for me. That if it was in my destiny, then nobody could have taken it away from me. I was only focusing on doing well in whatever opportunities I get to the fullest, even if its domestic cricket.

“Cricket is our bread and butter and like they say in Allah’s home, there is delay, but no denial. I don’t think about the 10 years going to waste. How can I say all the runs and records made in domestic cricket went in vain? I’ve got enough respect and I want to redeem myself in whatever time I’ve left in cricket. Maybe I may get more success than what I’ve earned, so I can’t complain and I’m happy about the success.

“My two bad innings in England, I felt I could have been dropped for them but he (Misbah) didn’t lose his faith in me and kept on encouraging me,” Fawad said. “He knew the potential in me and gave me another chance in New Zealand, so this specific support from the coach lifts you up and then that is the confidence you take to the crease.”

Fawad brought up his century against the Proteas with a six off Maharaj, moving from 94 to three figures in one blow. But his innings was one of patience and clever shot selection. He played the seamers – particularly Kagiso Rabada – with respect, but was more severe on spinners Maharaj and George Linde.

He eventually fell, flicking paceman Lungi Ngidi to midwicket where Temba Bavuma gobbled up a straightforward chance. It was one of the few mistakes Fawad made, but unfortunately for South Africa, it came after putting Pakistan into a commanding position. DM