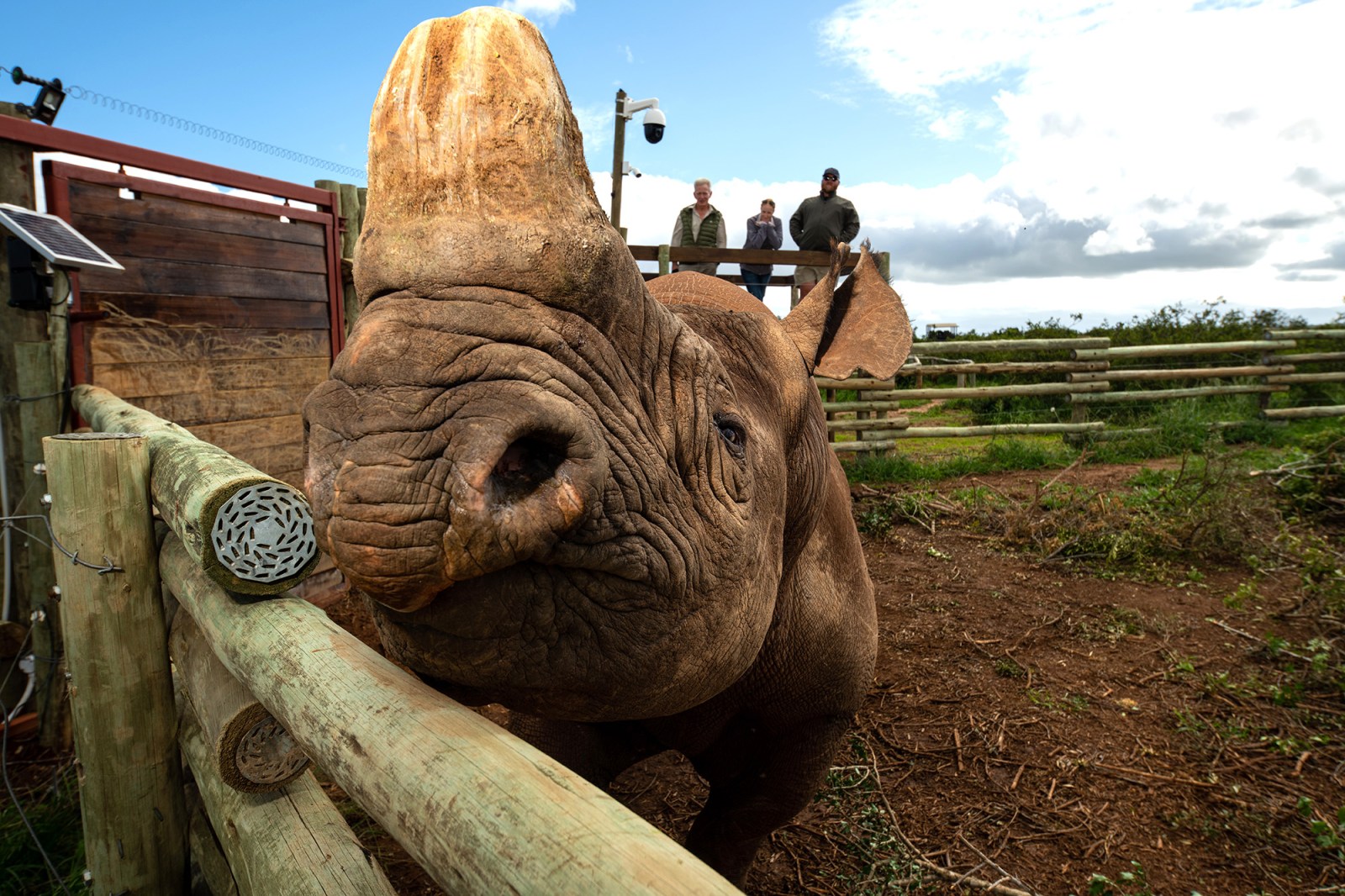 The blind black rhino (Munu) that represents the changing face of tourism in the Eastern Cape. (Photo: Mantis Group)

Munu is one of 256 black rhinos left in the world. He used to be grumpy, but now he helps inspire conservation.

A blind, formerly cantankerous rhino is at the centre of two innovative plans to revive ecotourism in the Eastern Cape as the industry is being devastated by the ongoing Covid-19 lockdown, travel restrictions and a lack of international tourists.

His name is Munu. He became blind because he liked to fight with other rhinos. He is one of only 256 black rhinos left in the world – and one of the sources of inspiration to save the badly damaged wildlife tourism industry in the Eastern Cape

“Films like My Octopus Teacher were our inspiration. We saw the impact that it had,” said Adrian Gardiner, the founder and chai of the Mantis Group and a pioneer in private ecotourism in the Eastern Cape.

“I think when you look at wildlife tourism and private game reserves in the Eastern Cape, ‘devastated’ is the correct word,” he said. “We all came to 2021 with a positive attitude, but things got worse rather than better,” he added. “The domestic industry was shut down halfway through the December holidays. British Airways and Emirates have cancelled their flights to South Africa. A lot of the private game reserves depend on international visitors. Since March last year, if we got more than 20% occupancy, we broke a record.”

But he said their introduction of impact tourism seems to have triggered great interest. Munu is central to two new initiatives piloted by the Mantis Group at their flagship Founder’s Lodge. The first is a rhino conservation impact safari that will take place in October and the second an online masterclass on rhino dehorning, which will show Munu being dehorned to protect him from poachers. Munu was relocated from the Addo Elephant Park, where he became blind after fighting with other black rhinos. To prolong his life and increase the likelihood that he will procreate, the team at Founder’s Lodge has built him his own boma that closely resembles his natural environment.

Claire Paton from the Impact Experience Team said Munu was an incredible ambassador for his species. He took some time to adapt to his new boma and if you didn’t know he was blind, you would never have thought so – he knows his boma so well now. He enjoyed a lovely mud bath, had a little rub on the fence post and then went for a snooze under his tree, walking around and navigating between the shrubs and fence as if he could see. It’s really remarkable how adaptable rhinos are, and it shows how important it is to save each and every rhino, if possible.

Tarryn Ingram-Gillson, who heads up Mantis Impact Experiences, said they took their inspiration from the gap-year experiences offered to students who want to volunteer in rhino conservation. They now offer this at a luxury five-star lodge.

“Our own student gap-year volunteering company with a portfolio of conservation projects in several countries is called Worldwide Experience. We recruit self-funded volunteers and students from all over the world to go behind the scenes on game reserves and various conservation projects, including ocean projects, and these volunteers gain hands-on experience, and in some cases even earn a qualification. This was the inspiration for Mantis Impact Experiences,” she said.

The safari also includes tree planting and an introduction to the bee conservation project run from the property.

“The research that we have done shows us that there is incredible interest. It has been very well received by tour operators,” Gardiner added. “At this stage only time will tell. I am being practical.

“The question we are asking ourselves is how do we get our properties to be involved in nature and impact in a positive way on communities. I think we have an edge on our competitors. The virus has brought some reality back to life,” he added. Gardiner is the patron of The Wilderness Foundation Africa, founding member of The Wilderness Foundation Global. Along with the Tusk Trust and African Parks, these organisations have created the Community Conservation Fund Africa, a non-profit company that raises funds and provides grants with the aim of helping communities create sustainable wildlife management systems in South Africa, Namibia, Zimbabwe, Rwanda, Kenya, Uganda and Zambia.

“If you take the wildlife out of Africa there will be little to no tourism,” he said, adding that 90% of tourists come to the continent to see wildlife.

He said the well-known conservationist Dr Ian Player had provided him with the name for his company. “The meaning of the brand name Mantis is Man and Nature Together Is Sustainable.”

The Mantis group has recently sold a 50% stake of its management company to international tourism giant Accor.

“We have about 80 properties around the world. We didn’t have a loyalty or distribution programme, so the first thing I said was if we do this deal we must create a foundation,” Gardiner said.

Donations through this loyalty programme have led to R7.5-million in investments in local communities and in conservation projects.

He said they also motivate guests to assist in conservation and to uplift communities. “Guests at our Zambezi Queen Luxury River Safari have started contributing to getting school uniforms for children. We also made sure that all schools had water.” He said they are also providing bursaries to Stenden South Africa, a branch campus of Stenden University in the Netherlands, specialising in hospitality, which Gardiner co-founded in Port Alfred.

Stenden also offers a course in wildlife management at the campus at Koffylaagte, a game reserve near Jansenville.

Gardiner said they also have big plans for the Hopewell Wildlife Conserve outside of Port Elizabeth. “We want to do a massive impact experience with children there. We are inspired by the movie My Octopus Teacher. We want to open a rehabilitation centre and a bird sanctuary as well,” he said.

“We are also looking at our city hotels,” Gardiner added, “to see how they can also make an impact. We want to be the leaders in changing people’s thinking on going forward,” he said.

He said they took the decision to put the live darting and dehorning of Munu online.

“At Founder’s Lodge we have to have 24-hour security to protect ourselves and the community from poaching. We are living in very tough times. Conservation has been devastated by the lack of ecotourism as this is how it is funded. Our online class will be a way to fundraise for Munu, for his food and his security.”

The class will be hosted by actor and conservationist Shannon Elizabeth. Greg Barlow, who is Munu’s custodian, will explain how they are employing artificial intelligence in the fight to conserve the rhinos.

“We are trying to do as much as we can to sustain an impact,” Gardiner said. “We are using our brand. We will survive. We had to take cuts and all sorts of things, but while we wait for the tourists to come back we are making plans.” DM168