Pandemic and xenophobia: The plight of migrants in SA 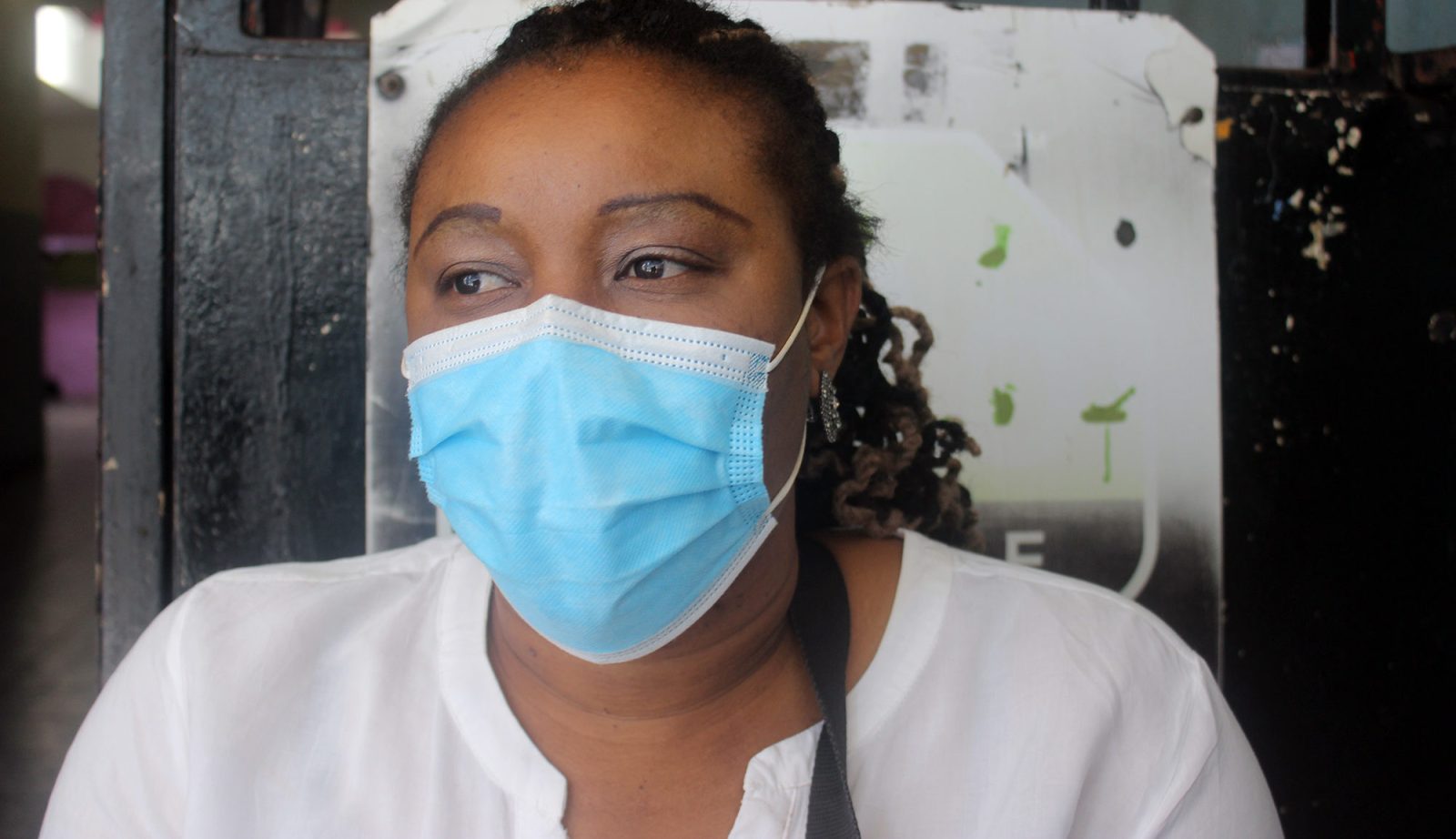 Chioma Umeh, from Nigeria, runs a tuck shop in Johannesburg. She said her business has suffered great losses since the pandemic hit. (Photo: Patrick Egwu)

Away from home, migrants in South Africa have been hard hit by the impact of Covid-19 and a resurgence of xenophobia.

Chioma Umeh, who comes from Nigeria, runs a tuck shop in Hillbrow, Johannesburg. Every day, she leaves home by 8am and heads to her shop, which is less than 15 minutes away, to start the business of the day.

Umeh said her business has suffered great losses since the pandemic hit South Africa in 2020. In March, the country announced a National State of Disaster in terms of the Disaster Management Act.

“It affected everything about my business, especially my family,” Umeh said. “It really affected us in such a way that things became very difficult, especially as a businesswoman. I couldn’t go out to do business, my kids couldn’t go to school, and my husband couldn’t do his business. We just had to limit the way we spend.”

Umeh, who has four children, moved to South Africa in 2012 to join her husband, who runs a currency exchange service.

“We didn’t receive anything,” she said when asked about government relief intervention during the lockdown. “But some Nigerians were sharing food parcels and groceries with fellow Nigerians living here.”

Umeh’s case is not isolated. Migrants in South Africa are striving to survive in difficult situations. Some of them are undocumented and live in poor communities and shacks.

According to South Africa’s last census, conducted in 2011, there were 2.2 million foreigners living in the country, and the numbers have grown since.

The International Organisation for Migration (IOM) said some of the 272 million migrants worldwide are very vulnerable because of personal, social, situational and structural factors. The IOM said their vulnerabilities may be exacerbated in crisis situations, such as the Covid-19 pandemic.

In August 2020, about 300 Nigerians were evacuated from South Africa, but they had to pay for their flight tickets. Many migrants who live in poor, vulnerable communities cannot afford this.

On 11 January 2021, President Cyril Ramaphosa addressed the nation in a broadcast on progress in the national effort to contain the pandemic. During the broadcast, Ramaphosa announced the closure of South Africa’s 20 land borders until 15 February:

“One of the challenges that we have as the festive season draws to a close is the huge congestion at many of our land border posts. This has exposed many people to infection as they wait to be processed and it has been difficult to ensure that the health requirements for entry into South Africa are met, with many people arriving without proof of Covid-19 tests.”

This is another challenge for migrants who travelled back home and are planning to return, or for those stuck in South Africa who cannot get back home.

“I don’t want to go anywhere, I am staying here,” said Felly Tatenda, a Zimbabwean taxi driver who has been living in South Africa since 2015.

“I know some of my friends who travelled during the Christmas holidays, but can’t make it to come back because the borders are closed now.”

The IOM says it is working with governments and partners to ensure that migrants and mobile populations, including stranded migrants, returnees and displaced persons, are included in efforts to mitigate and combat the illness’s impact.

“Although they face the same health threats from Covid-19 as the host populations, they may face vulnerabilities due to the circumstances of their journey and living and working conditions. Loss of jobs and income, residence permits and resources have all impacted mobile populations, resulting in hundreds of thousands of stranded migrants globally,” the organisation said on its website.

Grace Banda (38) from Malawi runs a tuck shop close to Umeh’s. She said the pandemic had brought many challenges and she couldn’t afford to pay bills during the lockdown.

“Everybody was asked to stay at home, so it was difficult for me at that time. Even now, I still find it difficult because things are not moving the way they used to before the coronavirus came.”

Samuel Ileka, originally from Nnewi in southeastern Nigeria, owns a beauty salon and has been living in South Africa for about 20 years. He said the pandemic had left him with bills and rent to pay.

“Covid affected us very much, especially when we spent almost two months at home when we had a total lockdown in Level 5 and now we are back to Level 3 again,” he said.

“We couldn’t pay our shop rent and other bills at home and even the customers were affected. Things are not normal the way they used to be.”

The Social Relief of Distress Grant – a special grant of R350 rolled out for a six-month period from May 2020 – is provided to asylum seekers and special permit holders with valid documents.

More than 20 women, mostly migrants from Zimbabwe, work inside Ileka’s beauty salon. They pay Ileka rent at the end of the month for the space they occupy and take home any profit they make. However, the women have not been able to keep up with their monthly payments because of disruptions caused by the pandemic.

“We are still recovering from the loss and damage and I am still struggling with my business,” he said. ‘This is not going to end any time soon. It’s going to take years for us to recover what we have lost due to the pandemic.”

Ileka owes the management of the property two months’ rent of about R60,000, which accrued during the lockdown in 2020.

“Some of them were asking me for help to support them with feeding their kids,” Ileka said of the women who rent space inside his salon.

“I have not paid management even now, but I hope to do so as soon as I get the money.”

The IOM says that “movement restrictions imposed at national and local levels also limited the continuation of livelihood activities, leading to a drop in global remittances further affecting remittances-dependent households in countries of origin and eroding coping capabilities”.

The organisation says the migrants’ situation “is particularly dire, given that their employment often supports families left behind and contributes to poverty reduction, access to basic services and education worldwide”.

“[The pandemic] even has more adverse and devastating effects as a foreigner here because all businesses were shut down and there was not any kind of support for us,” said Olaniyi Abodedele, a Nigerian and the publisher of the Nigerian Voice, a Nigerian community newspaper based in South Africa.

“Despite the fact that we were not earning income, we still had to maintain our obligations such as bills, rent, electricity, water and others.”

Abodedele said Nigerians support each other during the pandemic.

Beyond the challenges posed by the pandemic, migrants living in South Africa have also faced growing xenophobia and calls to leave the country.

In September 2020, thousands of South Africans marched in the streets and called for foreign nationals from countries including Nigeria, Zimbabwe and Lesotho to leave the country.

At the embassies of these countries, the protesters claimed that foreigners were taking away their jobs and committing crimes such as human trafficking and dealing in drugs.

On social media, hashtags such as #PutSouthAfricaFirst trended for weeks, and xenophobic networks shared messages of hate and anti-foreigner sentiments.

The South African Institute of Race Relations says attacks on migrants and their livelihoods highlight the consequences of governance and economic failure.

“Where do they want us to go?” Umeh asks. “I think we are better together as a community than spreading the message of hate and discrimination.

“We just need to keep striving and taking each day as it comes. I hope everything gets back to the way it used to be.” DM