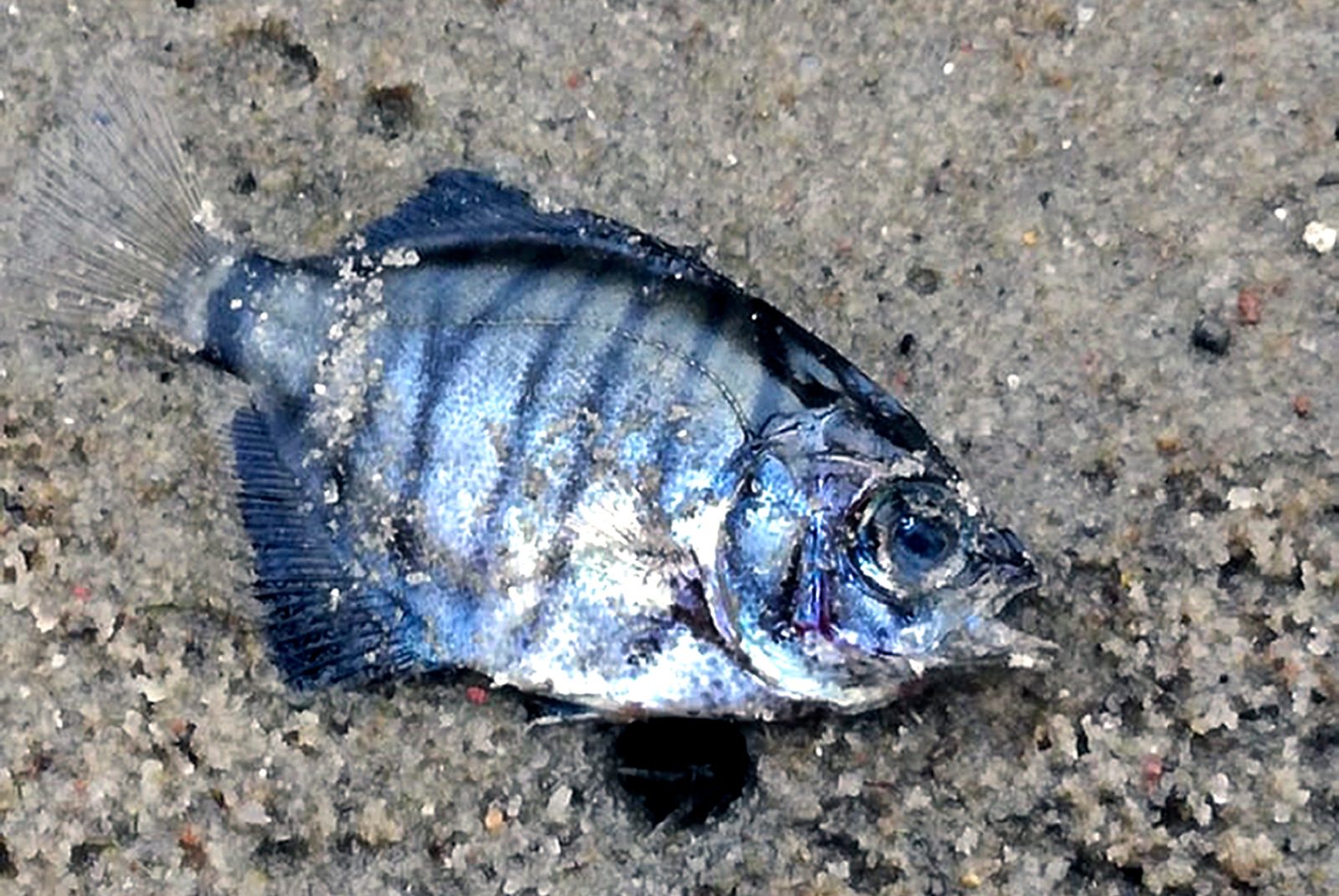 One of many dead fish found on the banks of the Swartkops River. (Photo: Rob Lochhead)

A black algae bloom, triggered by either legal sewage discharge or ongoing sewage spills into the Swartkops River, has killed hundreds of fish and other aquatic life on a scale which conservationists say they have never seen before.

Hundreds of dead fish littered the banks of the Swartkops River in Nelson Mandela Bay and crabs desperately tried to get out of the water as a toxic black algae bloom suffocated the river in the past few days.

As members of the Zwartkops Conservancy paced the banks of the river and officials from the Department of Water Affairs took samples, flocks of birds descended to eat the dead fish.

The bloom, Jenny Rump from the Zwartkops Conservancy said, was triggered by ongoing sewage spills since December that flowed into the river via the Motherwell Canal.

“The water has become the colour of Coca-Cola or black coffee,” she said, “And the smell of sewage is everywhere. It is unbearable.”

Rump, who has been involved with the conservancy for decades, said none of their members has ever seen such a large number of fish and other creatures die all at once.

In June 2020 scientists from Nelson Mandela University found the harmful black algae, which made the water turn red and then black, in the Swartkops River for the first time.

They said they feared the invasive algae could spell disaster for the river.

Dr Daniel Lemley, who first identified the harmful algae in the nearby Sundays River and then in the Swartkops River as Heterosigma akashiwo, said the government should lower the amount of treated sewage that municipalities are allowed to discharge into rivers.

“Even legal amounts of discharge can trigger a bloom,” he said. The algae is an invasive species that was first identified in Japan. Lemley said it was not known how it was introduced into Nelson Mandela Bay’s rivers.

Lemley was out at the river on Tuesday to collect samples.

“We have identified a number of black algae blooms in the river,” he said. “Most of the blooms appear to be dying off except in one place.”

He said the algae boosts the oxygen levels of the river to about 300% and then when they stop photosynthesising, oxygen levels drop to almost non-existent levels.

“In some places of the river there was no oxygen in the water,” he said.

There is an ongoing campaign to have the Swartkops estuary, as part of the Zwartkops Conservancy, declared a protected wetland in terms of the Ramsar Convention. It is home to the mud prawn that provides food to 90% of 200 bird species in the estuary, and is also a source of food for a large number of fish species that feed on the intertidal mud banks.

The estuary has been designated an “important birdlife and biodiversity area” by BirdLife International, and is considered a globally important bird area as 18 endangered species on the South African Red Data list are found in the area. It is the third-largest salt marsh area in South Africa.

Lemley said the algae was a type of phytoplankton and where it occurs in high concentrations it releases a mucilage that remains in the water.

“The species itself is not toxic, but it produces a thick mucilage that can clog the gills of fish. The reasons the crabs were seen trying to get out of the water is that they live on the bottom and a lot of the mucous will settle there.”

He said it would never be possible to get rid of the algae. “A good flood might help,” he said, “but if one bit of it remains behind in the river sediment there can still be a resurgence.”

Rump said they had noticed since December 2020 that there were ongoing sewage spills into the Motherwell stormwater canal that ended in the Swartkops River. These were only halted on Friday, 22 January.

“But throughout December and January the sewage was running,” she said. “We heard many excuses: It is Christmas. There is Covid-19. But the spills just carried on. We have actually been raising this issue since October.”

She said that after rain fell over the area last week the sewage in the canal washed into the river at Red House and they thought the black algae problem had gone away, but it came back with a vengeance.

“The water looks like Coca-Cola, like coffee. We knew that the harmful algae bloom, even if it died off, could rejuvenate. Now it did.

“We have never seen anything like this before. I couldn’t believe it. The crabs tried to get out of the water,” she said.

A spokesperson for the Nelson Mandela Bay municipality, Mthubanzi Mniki, said sewage spills into the stormwater canals, and ultimately into the river and the estuary, stemmed from the sewerage system not being used correctly by communities, resulting in blockages and spillages.

“Communities dump all sorts of foreign objects into the system, including rags, nappies, plastic crates, rocks, tyres and even oil. These objects block the system on a daily basis, resulting in spillages. In some cases excavation needs to be done to remove the obstruction in the line.

“In some cases, the objects flow all the way to the wastewater treatment plant, which also damages the mechanical equipment, and the bacteriological processes that are needed to treat the effluent. Spillages from the system will therefore happen from time to time, as long as communities keep vandalising the system.

“The municipality therefore tries to ensure compliance at all times, but there will be instances of blockages due to reasons stated above. As soon as the municipality becomes aware of blockages in the system, maintenance teams are immediately dispatched to try and clear these blockages, and limit spillages.

“The municipality is rolling out communication awareness programmes on the correct usage of the sewage system, and to also encourage residents to report any vandalism or illegal dumping into the sewer network, as well as vandalism of sewage pump stations,” he added.

Rump said the Zwartkops Conservancy had weekly classes for 70 children as part of their Masifundisane project to teach the responsible use of the sewer system.

“We take the kids to the Motherwell stormwater canal and the estuary, and to the Aloe Reserve in the winter.” DM/MC