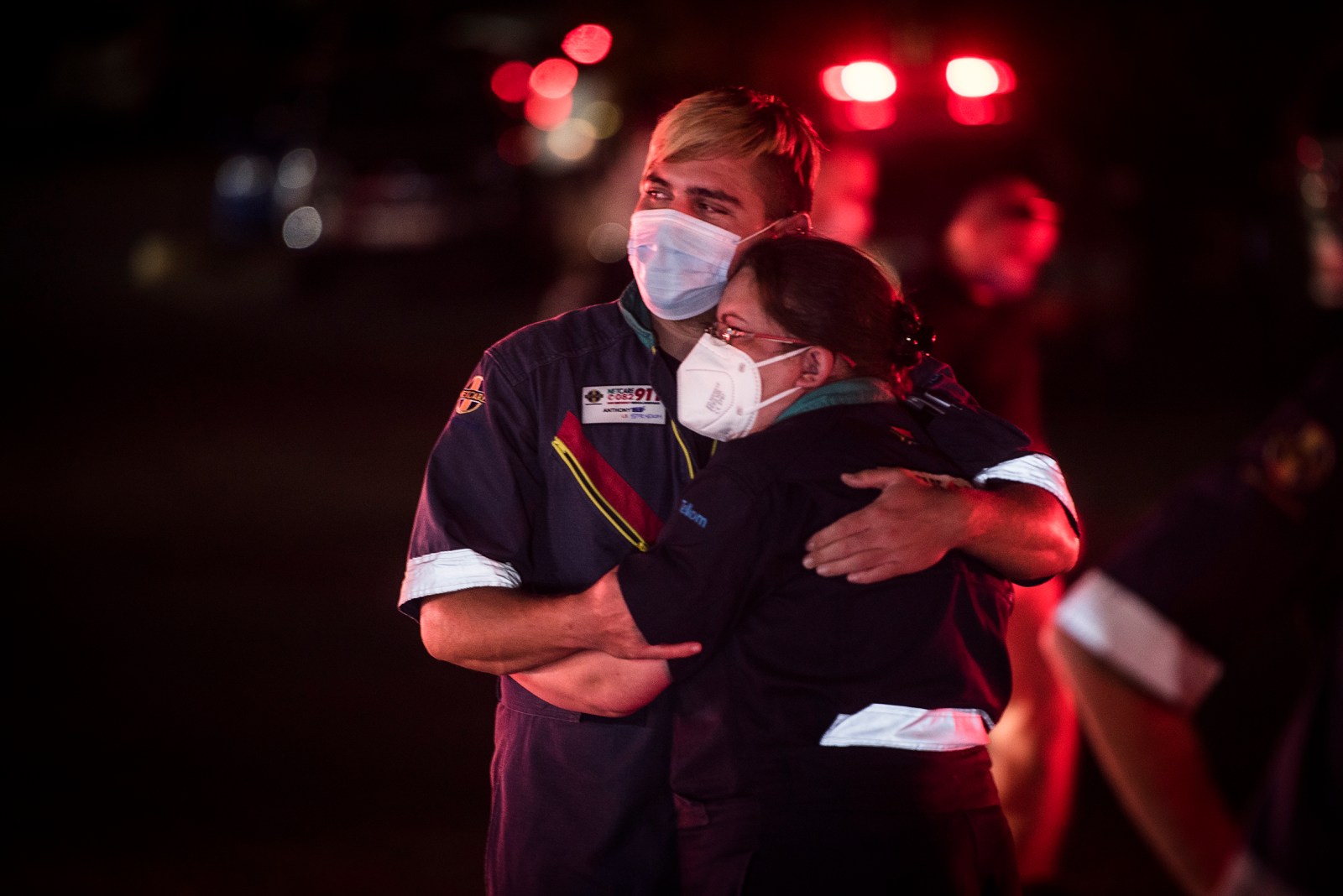 As South Africans reeled in shock at news of the Netcare chopper crash, the EMS community united in grief. Crews expressed their disbelief as they gathered on the helipad outside Netcare Milpark Hospital on Thursday, 21 January.

This is how one stunned medic summed up the mood as scores of EMS personnel gathered on the hospital’s helipad to pay their respects to the five killed in the crash.

As they placed flowers and lit candles, the red emergency lights of scores of emergency vehicles were switched on and three choppers conducted a flyover. They stood in groups, hugging and comforting each other. On Friday, a motorcade of emergency vehicles drove from Krugersdorp to Milpark where they were greeted by grief-stricken colleagues.

Anaesthetist Dr Kgopotso Rudolph Mononyane, cardiothoracic surgeon Dr Curnick Siyabonga (Sia) Mahlangu, Mpho Xaba, a specialist theatre nurse for cardiothoracic and transplant surgery, Sinjin Joshua Farrance, an advanced life support paramedic at Netcare 911, and pilot Mark Stoxreiter, who worked for the National Airways Corporation, were part of an extracorporeal membrane oxygenation team on their way to try to save a critically ill Covid-19 patient in Hillcrest, KwaZulu-Natal, when their Netcare 1 Air Ambulance crashed in Bergville, killing all on board.

“Devastation and unreal,” said a paramedic, who did not want to be named. “I kept on thinking about how an entire helicopter and five people could just be ‘gone’ like that. I think this was a huge eye opener. Sometimes we think we are indestructible because we deal with so much chaos and we always have to be strong for those around us. But I went to bed with a very heavy heart and held my child a little bit tighter and a little bit longer because it happens so quickly. It was catastrophic, something that shouldn’t happen, and that hits the soul hard.

“It feels surreal, almost like it can’t be. We have been dealing with a lot of death and dying lately in the second wave, but to lose our ‘own’ like that is surreal.”

The paramedic, who had worked with Farrance, described him as a gentleman. He was “quiet, but he cared deeply for those around him. His compassion and empathy were something else. He was an incredible practitioner.”

Earlier,  Mononyane had been called to offer life-saving support to Minister in the Presidency, Jackson Mthembu.  Richard Friedland Netcare CEO said: “Our late minister… was critically ill. We had airlifted him with that same helicopter from Steve Biko [Academic Hospital] on Tuesday night and we brought him to our hospital and one of our doctors [Mononyane] was involved in his resuscitation. Unfortunately, that was not successful.” Mthembu succumbed to Covid-related complications.

While the South African Civil Aviation Authority said it has yet to determine the cause of the crash, Daily Maverick has obtained a message, shared on one of the Netcare WhatsApp groups, citing an issue with the chopper’s gearbox. DM