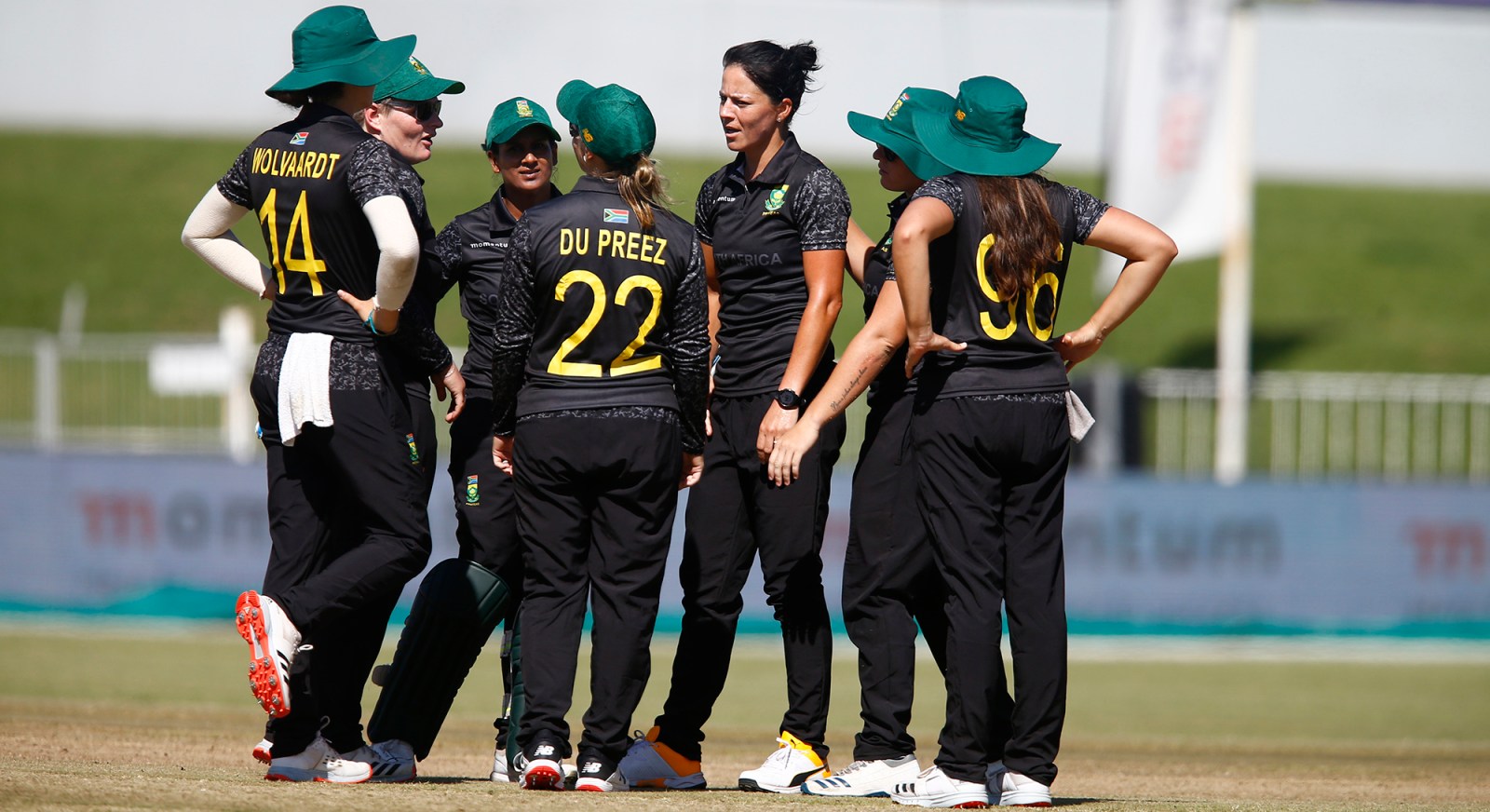 Marizanne Kapp of the South Africa Women Proteas (the Momentum Proteas) after taking a wicket during game two of the 2021 Women's ODI Series between South Africa and Pakistan at Kingsmead in Durban on 23 January 2021. (Photo: Steve Haag / BackpagePix)

South Africa’s senior women’s national cricket team sealed a series victory over Pakistan. However, they still have some work to do to click into top gear.

The Proteas Women’s team registered a morale-boosting series win over Pakistan Women. The Proteas, during the inaugural Black Day One Day International (ODI), saw off a stubborn Pakistan side by 13 runs, to wrap-up the three-match series with an unassailable 2-0 lead.

One area that will be a huge concern though, and which they will seek to tighten up for the third ODI and onwards, is the quality of fielding.

Similar to the events that transpired in the first ODI, once again lapses on the field let the Proteas down as dropped catches and misfields saw Pakistan almost successfully chase South Africa’s total of 252 for seven in their allotted 50 overs.

Coming into the match, the Proteas were hopeful of a more fluid and flawless display, especially in their fielding, but in other departments as well. The player of the match in the first ODI, Shabnim Ismail, had described her team’s display on the field as amateurish and no doubt would have sounded the call for a more ruthless performance the second time around. Alas.

Having seen the experienced duo of Marizanne Kapp and Ayabonga Khakha combine to make light work of Pakistan’s top order, and leave the visitors slumped on 73 for five, it seemed that the Proteas were on course to coast to a convincing victory.

However, bad habits from the previous game crept in as the hosts eased their collective grip around the Pakistani necks, allowing Nida Dar and Aliya Riaz to mount a fightback for the Asian side. The pair added an impressive 111 runs for the sixth wicket.

Speaking after the game, Kapp, the player of the match, was candid in dissecting her team’s fielding display.

“Our fielding has been shocking [over the past two games]. It’s not been up to standard. I feel like we fall asleep halfway through the match; it’s not good enough,” said the all-rounder.

The stand-in captain for the series, Suné Luus, echoed Kapp’s sentiments, saying the fielding display was “far below the standards that we want to achieve”.

Of course, after being inactive for almost a year because of the prevailing Covid-19 conditions, some rustiness is to be expected. Hilton Moreeng and his charges will take away some positives from the match though; the biggest one being that they have sealed the series, and now they have a chance to complete a clean sweep by securing victory in the third ODI.

Another positive from the previous game is the batting. Just as in the previous match, Kapp was the pick of the Proteas batters, this time finishing unbeaten on 68, off just 45 balls. The half-century was the 31-year-old’s ninth in the 50-over format, and she added three wickets to that display with the willow.

Proteas opener Lizelle Lee would have started the match out to prove a point, after being dismissed for a duck in the first over of the opening game of the series. She too added some valuable runs to South Africa’s total (47), but would have been disappointed by not going to 50 runs and beyond.

Of course, the game was not just about cricket. The Proteas officially ushered in Black Day, which seeks to reach the heights that their male counterparts’ Pink Day has reached.

The event will become part of Cricket South Africa’s annual calendar, and seeks to shine a massive spotlight on the plague that is gender-based violence (GBV).

“The Black Day ODI has brought another level of excitement within the squad because it is towards a great cause and something that we as the Momentum Proteas players are proud to be associated with,” said Proteas willow wielder Laura Wolvaardt in the build-up to the game.

“We are honoured to be creating an event to bring and draw attention to the injustices around GBV.”

The final ODI is set to take place on Tuesday at the Kingsmead stadium. Three days after that, attention will shift to the shortest format of the game. The Proteas will host Pakistan in three T20 Internationals, also at Kingsmead. DM