When they killed Neil Aggett 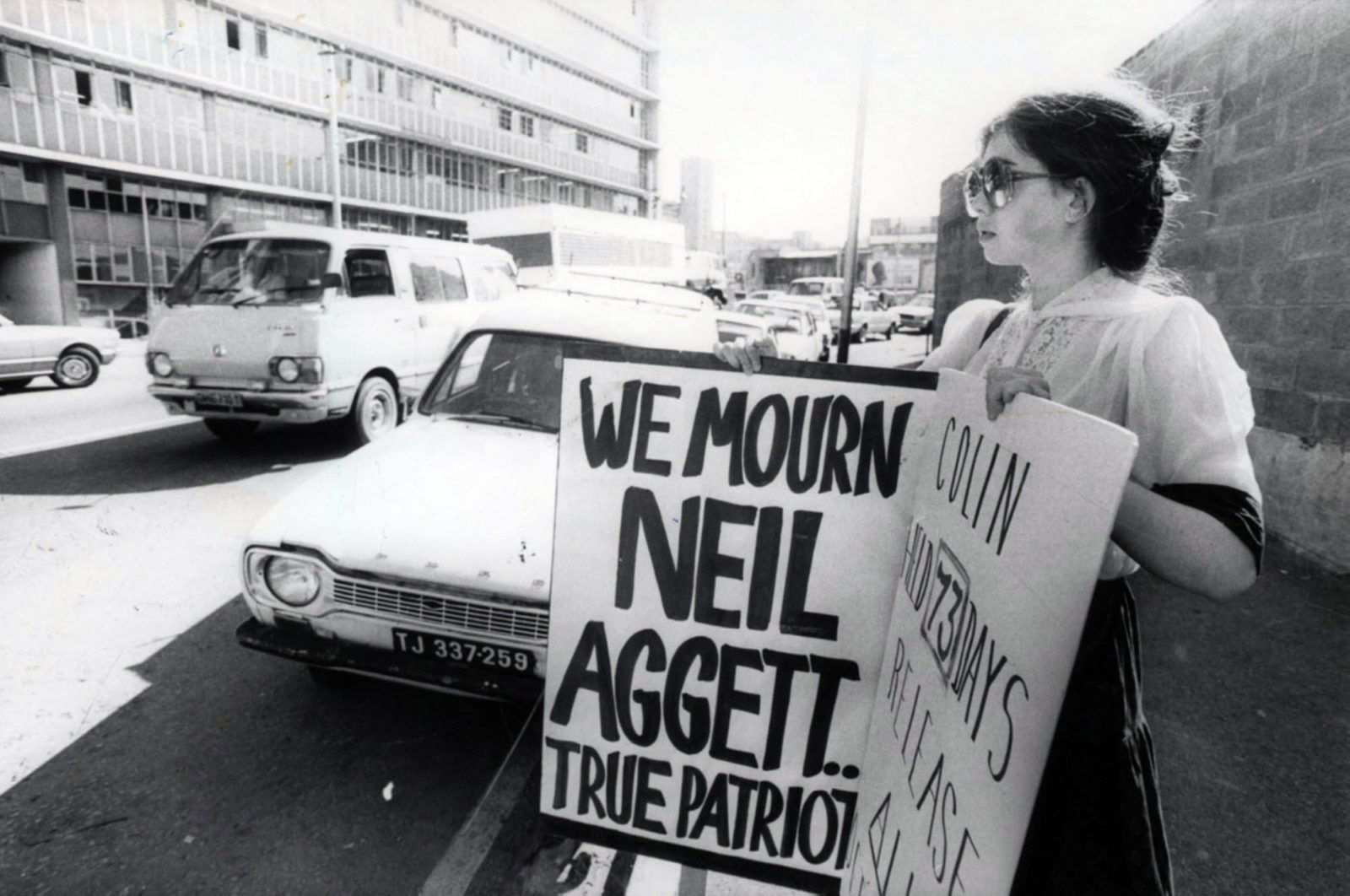 The second inquest into the death in detention of the unionist, in 1982, is now under way. The first was a whitewash. To heal from such evil, South Africa deserves the truth.

On 5 February 1982, anti-apartheid union organiser Dr Neil Aggett (28) was allegedly “found hanged” in cell 209 by police in the notorious John Vorster Square after 70 days of Security Police torture and 62 hours of interrogation.

Jill Burger, Aggett’s sister, told this chilling chronicle of a death foretold to journalist and writer Tymon Smith, who has written extensively about the recently reopened inquest into Aggett’s death and the new evidence that has emerged.

Knowing you would be killed was not uncommon among anti-apartheid activists during the 1980s. It came with the territory. Matthew Goniwe and Fort Calata, two of the Cradock Four, had acknowledged they would be killed too, before they were brutally assassinated. The dedication and courage of these staunch activists was extraordinary.

The Security Police at the time had unlimited, terrifying powers. They could detain and/or torture you for an hour, a week, a year, or kill you – with impunity. They could bomb your car, hang a dead cat outside your door, or just assassinate you as you answered the door. They could steamroller your shack with a Casspir, or torture you until you “broke”. They could poison your clothes, abduct you, blow up your body, literally anything they liked. Their bosses, the politicians, all knew about it.

I remember when the notorious Gideon Nieuwoudt came for me. I was expecting them because the Security Police had set a trap for us. So when he knocked, I recognised the tall, freckled monster who had interrogated Steve Biko three years before and beaten him so badly that he died. He politely asked if I was David Forbes. I replied: “You know who I am.”

He asked me to come “for questioning”. What choice was there? I got in the pale-blue Cressida, which roared off to the local Sanlam Centre. I was very lucky. I was small fry, and after some questioning, I was freed. But when you got into that Cressida, you never knew how long it would be. They could detain you without trial indefinitely. That’s the power of fear they held over you.

Neil Aggett and his girlfriend Dr Liz Floyd were not so lucky. Their names, with others, had been found on a list Barbara Hogan had left in a dead-letter box for what she thought was an Umkhonto weSizwe group from Botswana. But it had been infiltrated. The Security Police bust everyone on the list, detaining them initially at the ugly tall blue building next to the M1 highway, the secretive and infamous John Vorster Square, the Johannesburg HQ of the Security Police, who “owned” the 9th and 10th floors, from which detainees who didn’t co-operate could be thrown to the ground below, tossed down stairs, or beaten senseless.

Dr Floyd was so badly tortured she had to relearn to read and write after she was released. She heard a detainee being electrocuted in the next room screaming. Police refused her permission to attend her longtime boyfriend’s funeral. These were very cruel, evil men.

What really happened in the early hours of 5 February 1982 may never be known, even after the second inquest, now under way, concludes. The first inquest, that same year, was the usual apartheid whitewash, finding no one responsible for an “induced suicide” while in the courtroom self-satisfied, smirking Security Police looked on, ready to go out and celebrate the death of another “leftie” with some “polisie koffie” (brandy and Coke).

At the time, I was a sub-editor at the liberal Rand Daily Mail newspaper, working from 2pm to around midnight.

A friend, Norman Patterton, did the night crime beat for the paper, and often I would join him on his rounds in the early hours, the hospitals, Brixton Murder & Robbery squad, Hillbrow Police Station, the Flying Squad, and the morgue.

The morgue. A silent, eerie, cold place, often with blood smears on the floor, and stainless steel fridges for “white” bodies. The so-called “non-white” morgue rooms (yes, even in death the races were separated) just had shelves around the walls, where the naked bodies were stacked, each with a pathetic little bundle of personal possessions. The loud hum of air conditioners kept the room temperature at a level that made one shiver in the cold, greenish neon light. That building is gone now, replaced by the Constitutional Court precinct buildings, but it held a horror all of its own.

So, the night after Neil’s death, Norman convinced the morgue attendant to let us see his body. It was touch and go; the attendant was terrified of the Security Police. He could lose his job if the cops found out two journalists (from the Mail, nogal!) had seen Neil’s body. I had hidden a small camera in my jacket (cellphones and small point-and-shoot cameras didn’t exist yet) and we wanted to get a photo to show the torture marks we knew we would find.

The cagey morgue attendant relented. He nervously took us to the rows of stainless steel doors, looked over his shoulder, and yanked one open, then he pulled out the gurney. A handsome bearded man lay on the tray, very still and silent. It was shocking. A brave and honest professional murdered for his beliefs by the state.

Norman was trying to draw the attendant away, to distract him so I could quickly snap a photo with the camera I had my hand on under my jacket. But the attendant was so nervous he would not leave me alone. Then he quickly pushed the gurney back into the fridge and slammed the door shut. We thanked him, made some small talk and left.

But that image has stayed with me forever. I wrote a poem when I got home to my Bree Street flat just before dawn, “Death of a Detainee”:

I watched the city awake:
another detainee had died
by hanging in a cell.
I made the calculations
then – and before –
we looked at the body
naked on a cold steel morgue tray.

A day or two later, I was asked by an activist if I could typeset some copy for a poster and have the Mail’s works department print out a bromide (it was before home printers and computers, and commercial printers would never touch anything political). They gave me a photo, and I did the necessary.

Shortly after this, Rand Daily Mail managing editor Dave Hazelhurst called me into his office. He had the poster on his desk. He said he understood why I had done this, but if the cops got hold of it they could close down the paper.

What I had done was subversive and illegal, but Dave accepted my apology, and that was the last I heard of it. “Hazey”, as we used to call him, was the ultimate newspaperman, a brilliant layout artist, great headline writer, amazing leader and mentor. He gave me the artwork, and I took it to the activist. It read, above the mugshot: NEIL AGGETT; and, below it: “Lived for his country. Died in Detention”. It was prominent at the funeral a few days later.

We know there was a massive cover-up to limit this public-relations disaster for the regime. The official verdict was “induced suicide”. The facts contradict this. Uniformed police patrolled the cells 24 hours a day, so the evidence that there had been no patrols between 10.30pm and 1.30am on 5 February was a lie. The Security Police had their own keys, and could remove detainees at any time of the day or night. How Neil could have hanged himself with a kikoi, when personal items were not allowed, is a mystery. There are lots of inconsistencies.

The 1982 inquest records were destroyed. The post-Truth and Reconciliation Commission prosecution was delayed by active suppression and obstruction by top-ranking ANC and government officials.

I went to photograph Neil’s funeral for myself. The cathedral was packed to the rafters. After the funeral, comrades carried his coffin from St Mary’s cathedral in downtown Jo’burg to Westpark Cemetery. I ran ahead of the procession, cameras swinging wildly; I’d stop, stoop, take pictures of the toyi-toyi-ing procession, let it pass, then run ahead again.

I remember at the graveside, the slow, sad and angry singing of Nkosi sikelel’ iAfrika, our fists raised and our eyes wet with tears. This was the national anthem of the struggle, together with Senzeni Na? (What have we done?).

My negatives were later destroyed in a geyser flood, but the memories remain. For the families of those who were tortured or killed, the pain and suffering is immense, deeply scarring and traumatising. We must never forget the people who paid the ultimate price for South Africa’s liberation. We cannot progress as a nation until we have justice, not rainbows. This inquest is only that beginning. DM168