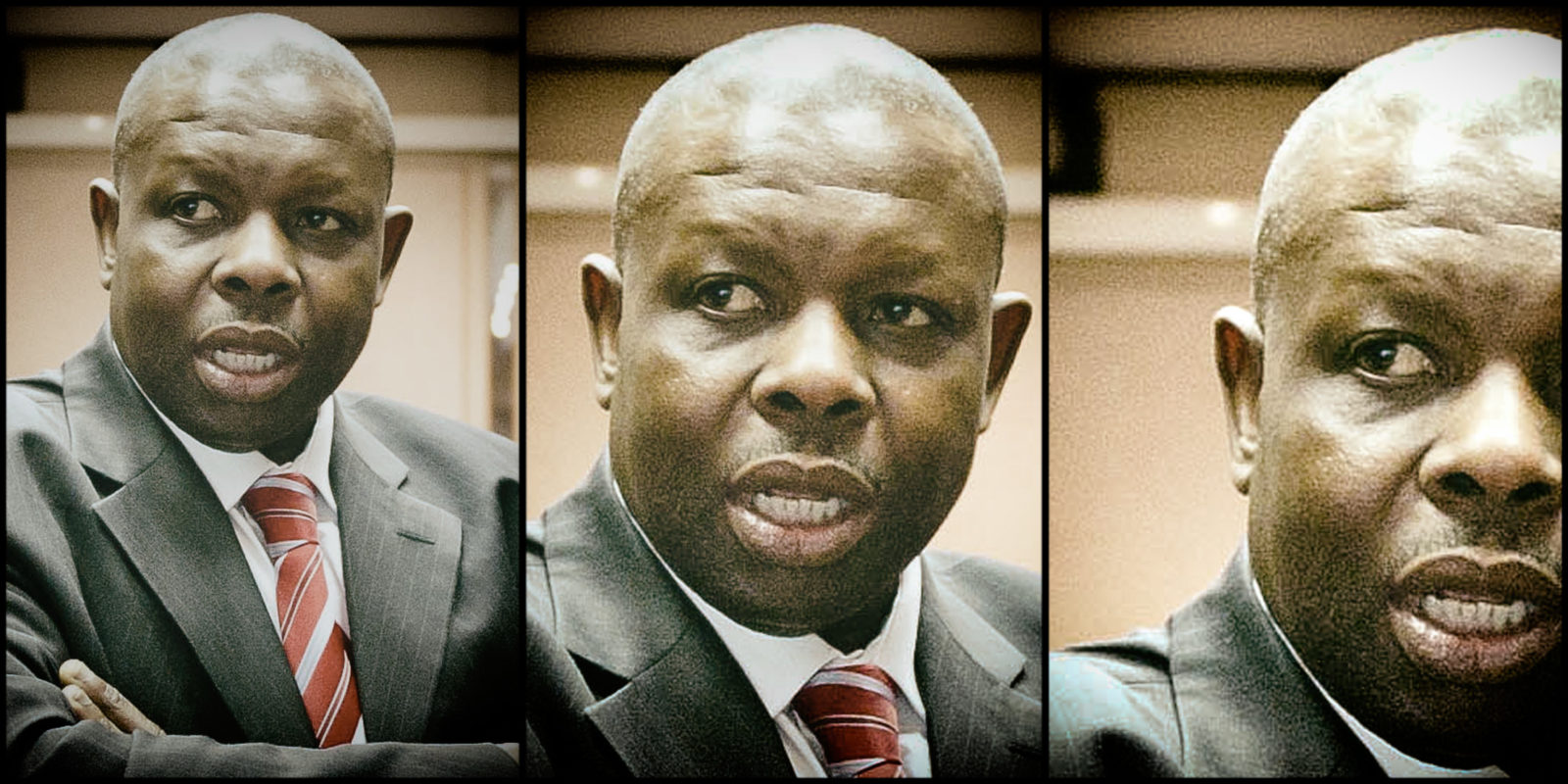 In what appears to be a repeat offence, Western Cape Judge President John Hlophe has once again personally intervened in a matter involving his lawyer Barnabas Xulu, replacing a High Court judge dealing with various actions related to a R20-million payback Xulu’s firm, BXI, owes the state.

The decision, the State Attorney informed Lamola, was “fraught with material misrepresentations and omissions”.

Hlophe revealed to Lamola that he had “discussed the matter with Mbenenge JP of the Eastern Cape Division and he has kindly agreed that Judge Zilwa should be appointed by the Minister to hear another application involving BXI.”

The matter relates to a disputed R20-million in unlawfully received legal fees from the Department of Agriculture, Forestry and Fisheries (DAFF) that Xulu was ordered in January 2020 by Judge Owen Rogers to repay.

Daily Maverick is in possession of a series of letters and emails between the State Attorney’s office, Minister Lamola, Hlophe, Eastern Cape Judge President Selby Mbenenge and Judge Smith that occurred in October and November 2020.

Hlophe was personally drawn into the Xulu matter when Barbara Creecy, Minister of Environment, Forestry and Fisheries, in March 2020 approached the Western Cape High Court to rescind an order issued in September 2018 that appointed Xulu’s firm as one of two “implementing agents” in a more than R100-million US repatriation settlement. Creecy’s approach revealed this had been ordered by Hlophe “in chambers”.

In May 2020, Hlophe directed that all Xulu’s matters pertaining to the Rogers ruling that Xulu repay the money as well any challenges to this, be heard by Smith in the week of 22 to 26 June.

Smith, from the Eastern Cape Division, had been appointed to act in the Western Cape as Hlophe was of the view that no judge in the fraught division could be trusted to hear a matter involving Xulu, his longtime legal adviser and lawyer to the Friends of the Jacob Zuma Trust.

The State Attorney pointed out that the reasons Hlophe had furnished to the minister as to why a “different judge is to be appointed are not the same as the reasons provided to us, by Smith J, for his withdrawal.”

This was confirmed, said the State Attorney, during a virtual hearing on 16 November 2020 when Smith, declining to hear an interlocutory, joined application, had stated that “following discussions with the Judge President of the Eastern Cape, on the morning before the hearing, it had been drawn to his attention that the Respondents [Xulu] continue to contest the issue of his competence”.

Smith, in that instance, had said that “in the interests of all parties” he had been willing to withdraw from the case “as he believed that if he did not take this step that it would derail the hearing on the main issues in the case”.

Smith had not conceded that he did not have the “authority”, said the State Attorney.

“In fact, to the contrary, he expressed the view and indicated that he continued to be of the view that whatever he had ordered at this stage in terms of his acting appointment in the Western Cape, and that everything was incidental connected to the main case that he was going to hear, as has been agreed.”

Smith was also “convinced and satisfied” that his involvement, including all orders handed down by him, had been “regular and competent” but given “the ongoing issue”, he had indicated a preference to “withdraw from the case” and that “another judge from the Eastern Cape would be appointed to take over the matter as a matter of urgency”.

A month before Hlophe’s letter to Lamola, Smith had granted an order for the sheriff of the Lower Tugela district to give effect to the 12 October order (one of two) authorising “all necessary steps, including enlisting the services of a locksmith” to open buildings situated at Sheffield Estate in Ballito, KZN. The property is listed as belonging to Xulu.

The court also ordered the tracking down of Xulu’s Porsche 911 Carrera GTS in order for it to be attached.

Xulu attempted to have his assets unfrozen and challenged Smith’s orders on the grounds of “competence”, but this was dismissed by Judge Slingers on 28 October 2020.

The day Hlophe wrote to Lamola, 16 November, was the same day Xulu had written to Hlophe complaining that Smith had been appointed as an acting judge in the Western Cape High Court for the period of 22 to 26 June only and thus had had no “authority” to hear interlocutory matters (in October), including the order for attachment of his assets.

The State Attorney said it was “simply unacceptable for litigants to directly address the judge presidents of both the Eastern and Western Cape divisions with misinformation as was done in this case — given the undisputed evidence before Slingers J that Smith J’s mandate had been confirmed.”

Hlophe’s request to Lamola to switch judges “obviously stemmed from correspondence received from BXI/Mr Xulu”, but the State Attorney’s views had not been taken into account at all.

The DAFF was of the view that it “serves neither the interest of justice, or the fairness of the legal process, that unilateral extra-curial correspondence, addressed to the JPs (judge presidents) — received on the morning of a hearing being convened by Smith” now directed the course of proceedings.

This was also in circumstances “where the matter is not raised properly on papers before the presiding Judge and where the letter to the JPs, who cannot be expected to know the precise details of what had to date transpired in the matter, is fraught with material misrepresentations and omissions .”

The State Attorney’s office also found it irksome that Xulu had been aware of Smith’s withdrawal in the matter even before DAFF’s legal representatives had been informed.

“We regard it as highly inappropriate that such preferential treatment is afforded to litigants during an ongoing judicial process, and in doing so no regard is had to Mr Xulu being in contempt of a number of the court’s orders, and having deliberately evaded service from the Sheriff,” said the State Attorney.

The office had “no knowledge as to whom — and how — such communication was unilaterally relayed to our opponents”.

“Moreover, given that they had simply not bothered to even file heads of argument despite having filed answering affidavits, we have no alternative but to conclude that what occurred on 16 November 2020 came as no surprise to our opponents, anticipating this to be the desired effect of their letter.”

While the State Attorney’s office had noted Hlophe’s request for the appointment of Zilwa and while it had “no objection to Judge Zilwa specifically”, it appealed for two different judges from the Eastern Cape Division to be appointed to hear the matter.

“Given the history of the matter, the complexity and importance of the matter to the respective parties, as well as the disputes arising particularly with reference to what transpired before Rogers and Smith, and the aspersions cast on the judges presiding to date, we request rather that two judges from the Eastern Cape be appointed to deal with what remains.”

DAFF would be “severely prejudiced” if there were any further delays, said the State Attorney.

“On the last occasion it had the consequential effect that the implementation of Rogers J order was delayed for several months, with further result, as has now emerged, that Mr Xulu further dissipated millions of Rands, in flagrant disregard of an order from Rogers J to preserve such funds.”

The record for the case exceeded 4,500 pages and a new judge would have to be taken through this, said the State Attorney.

With regard to the orders to attach Xulu’s assets, the State Attorney’s office said “we are concerned that in the event that the next appointed judge rules against Mr Xulu and his associated entities in the joiner application that we will again find ourselves with a situation where a judge is being substituted, even when there is no evidence for such removal, or valid grounds for a judge to withdraw.”

Hlophe has previously been seared by the Supreme Court of Appeal Judge Visvanthan Ponnan, who found in 2017 that the Judge President had not applied his mind in a matter involving the theft of R48-million by a businessman represented by Xulu at the time.

Analysis: Time for Judge Hlophe to face the music

While he was not one of the duty judges on the roster set down to hear urgent matters in the Western Cape High Court on that day, Hlophe had allocated Xulu’s matter to himself.

In that instance, Hlophe lifted a previous provisional restraint order by a judge and also dismissed an application by Old Mutual to intervene in the matter. Hlophe also blocked intervention by the National Directorate of Public Prosecutions.

Ponnan not only pointed out that Xulu was Hlophe’s personal attorney who had represented him in various judicial and quasi-judicial tribunals since about 2009, and who continued to do so “in grave disciplinary proceedings”, but also that he had allocated the case to himself while he was not one of the duty judges”.

Hlophe faces several complaints that have been lodged with the Judicial Services Commission. In December he finally faced a tribunal over allegations that the Judge President had attempted in 2008 to influence two Constitutional Court judges to rule in then president Jacob Zuma’s favour.

The tribunal has not yet released its finding. DM