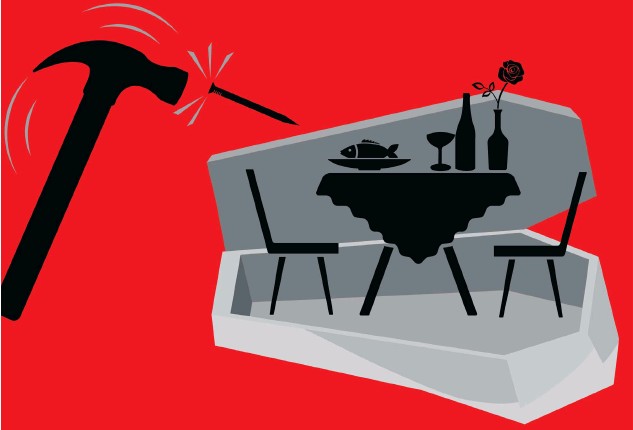 Amid an intensified lockdown – under which the sale of alcohol is banned – a stalling economy and Eskom load shedding, South Africa’s hospitality industry is already financially distressed. Now the government has introduced new worker remuneration regulations for the sector.

“I feel like I’m running on a treadmill that is going backwards.” This is how Frankie Gianfranco has described ongoing efforts to ensure that his eatery survives the crippling effects of tightened lockdown regulations.

Gianfranco is the owner of Frankie’s Food and Coffee in Johannesburg’s trendy 44 Stanley Avenue, which is normally bustling with hipsters, students and working professionals, but lately resembles a ghost town.

Walk into Frankie’s and surrounding restaurants, and you’re likely to be confronted by empty tables and waiters eagerly waiting for customers who may never come. Gianfranco said generating daily sales of about R1,500 to cover the take-home pay of his two workers (already reduced to 65%) and operating costs is becoming a herculean task.

“I’m mortgaged to the hilt. I’m now lending money from my family to pay workers and other business expenses because the restaurant is not making money. If this continues until March, I might not be able to keep the restaurant open,” he told DM168.

Many more may not survive. Already reeling from the lockdown, under which the sale of alcohol is banned and public life is restricted through a 9pm curfew, restaurants have been thrown another curveball by the government.

The Department of Employment and Labour has pushed new regulations that will require businesses that sell food and beverages to provide, among other things, improved remuneration for workers, including mandatory December bonuses (of one week’s wages), take-home pay that is above the R3,500 national minimum wage, and weekly payments to workers if they are required to wash their uniforms.

The new regulations came into effect on Monday 18 January and mainly affect businesses in the hospitality industry such as restaurants, coffee shops, pubs, taverns, catering companies and others. From Monday, businesses have 30 days to comply with the regulations.

More pay and benefits for workers

Minister of Employment and Labour Thulas Nxesi is apparently vexed by labour violations in the hospitality industry, prompting him to sign the new regulations to promote fair working conditions and remuneration benefits for vulnerable workers.

Questions sent by DM168 to Nxesi’s department about the exact motive behind the regulations were unanswered at the time of publication.

The wide-ranging regulations are part of a collective agreement by the recently established Bargaining Council for Fast Food, Restaurant, Catering and Allied Trades, which has been extended to all employers in the hospitality industry – even those who are not part of the bargaining council. A bargaining council is a labour mechanism that deals with collective agreements, solving labour disputes and promoting consultation between employers and workers on labour laws.

Under the regulations, businesses must pay wages that exceed the minimum wage by at least 7% (especially for lowest paid workers) and wage increases should be inflation plus 1.5% in the future.

Business owners will also be required to match worker monthly contributions to pension fund savings, funeral plans and a range of levies paid to the council.

The new regulations exclude businesses in Johannesburg and Pretoria, as both cities already have collective bargaining structures in place. Up until Monday, the hospitality industry in other parts of SA had been governed by a sectorial determination, which has less onerous requirements.

Although Gianfranco’s eatery in Johannesburg won’t be affected by the new regulations, he said businesses will struggle to keep up with the added cost and burden of compliance.

“It will be a final nail in the coffin for many businesses,” he said.

The timing of the new regulations couldn’t be worse for an industry that is a casualty of the lockdown, said Wendy Alberts, CEO of the Restaurant Association of South Africa, a lobby group for the sector.

“This is not the time to look at any increases in business costs, as we are battling to keep people employed,” said Alberts, adding that the hospitality industry supports 740,000 direct jobs and contributed 8.6% to SA’s GDP in 2019. “One would think that during these challenging circumstances, the government would stand with the restaurant industry.”

The Federated Hospitality Association of South Africa (Fedhasa), another industry body, plans to drag Nxesi’s department to court to overturn the regulations and start a new consultation process. A sore point for Fedhasa is that Nxesi’s department did not embark on a consultation process or get the requisite representation of 50% plus one (majority rights) from the industry to back the new regulations.

Rosemary Anderson, the national chairperson of Fedhasa, said the representation blunder was largely made by the Registrar of Labour Relations, who is tasked with determining majority industry representation before any regulation can be signed by Nxesi.

Employer organisations that form part of the hospitality industry bargaining council – mainly the Guardian Employers Organisation (GEO) and the Catering, Restaurant and Tearoom Association (Catra) – had a strong presence in Gauteng, said Anderson, but lacked representation in other parts of SA, where the new regulations applied.

The registrar received representation from GEO and Catra, organisations that Anderson said did not represent the interests of the broader hospitality industry. “Everyone is dumbfounded by what has happened. No one can believe it,” she said.

In Anderson’s “cordial engagements” with Nxesi’s department, she was informed that the only way to challenge the regulations would be to approach the court. DM168