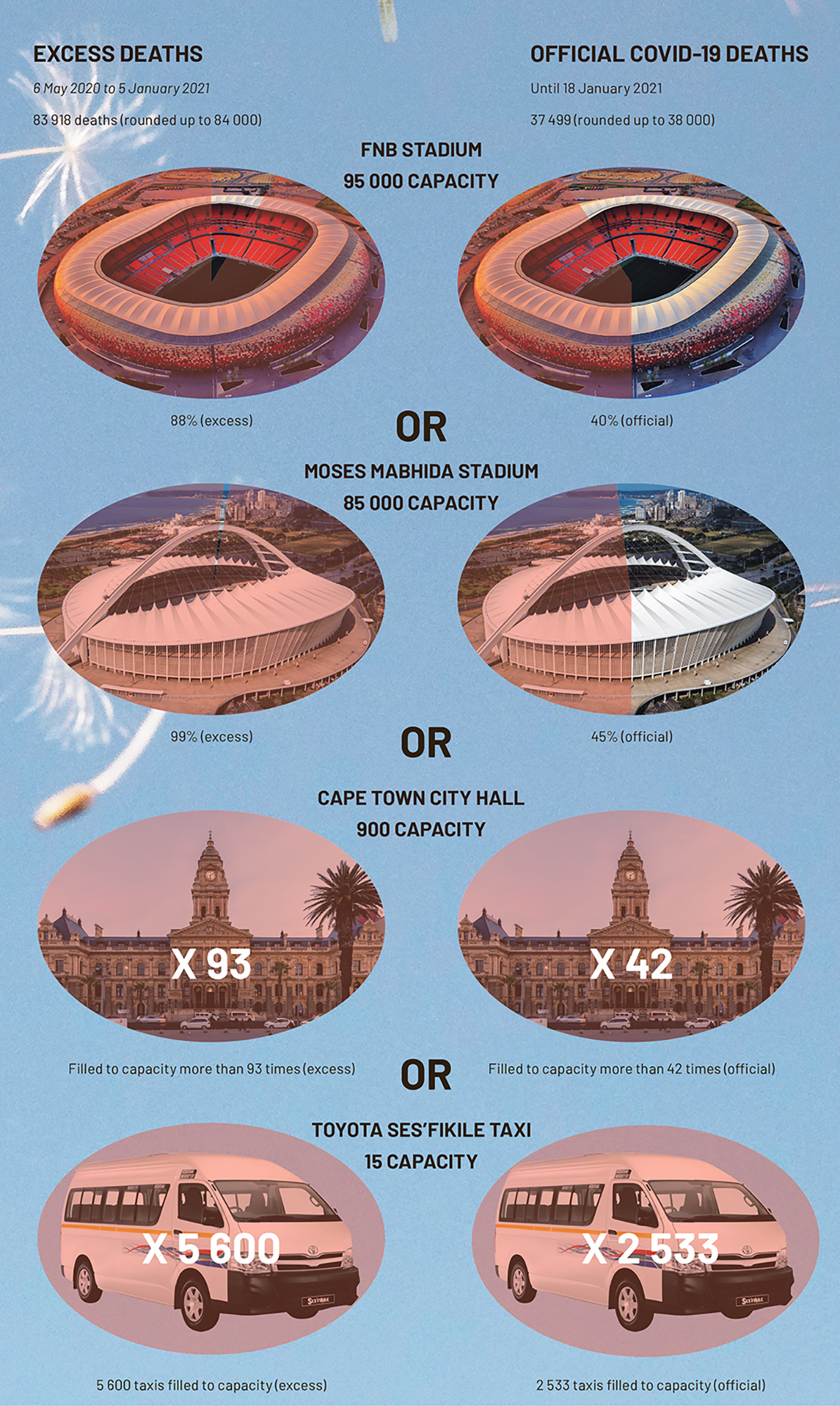 Reflection on loss, and grief during COVID.Photo:Graphic

More people died in the first week of this year than in any week measured before in South Africa. In this terrifying and lonely season of Covid-related sickness and death, where does all our grief go?

I don’t miss a beach holiday if I can help it, but as the Covid-19 cases spiked at the end of last year and the numbers of deaths continued to grow, we cancelled and hunkered down.

It was the most terrifying December to hear and read of people getting sick and many dying. My WhatsApp groups were full of “Inna Lillahi wa inna ilayhi raji’un”, the Muslim prayer on hearing news of the dead and meant to comfort the living.

It is like “dust to dust”, a reminder that you come from your maker and to the Almighty (Allah) you return. This is usually a comforting condolence, but the pace of its repetition was unusual and frightening.

Saaberie Chishty, the ambulance and burial society, sent out spine-chilling videos of City Parks teams in Johannesburg rapidly enlarging cemeteries with grave warnings to people to change their December behaviour. It would prove to be too late for many.

When the New Year arrived, it was only sad, not happy.

You hesitate to name individuals when 38,000 compatriots have died of Covid-19 since we started counting in March last year. But by the first few weeks, we had lost Cabinet’s national spokesperson and minister Jackson Mthembu, cooking icon Dorah Sithole, agricultural leader and farmer Professor Mohammad Karan, businessman-philosopher Bongani Khumalo, Aids treatment luminary and child health leader Dr Arthi Ramkissoon, as well as the cultural pacesetter Mzwandile “Wandi” Nzimande, co-founder of Loxion Culture, the street-life clothing brand. There are many more leaders in their fields, in their families and in our lives.

It felt as if we were losing pillars of meaning, our national foundation and our moorings or anchors who give direction and help us understand ourselves. It felt like the national DNA was being sucked out at a pace faster than that which normally allows for the natural regrowth and replacement of the beautiful human curve of life.

Between 30 December and 5 January, Dr Debbie Bradshaw and her team at the Medical Research Council (MRC) counted 20,063 deaths. “During the week including New Year’s Day the number of natural deaths exceeded the predicted number by 131%, resulting in more than 10,907 deaths from natural causes among persons over one-year-old,” said the MRC in its weekly mortality study. These were not all deaths related to Covid-19, but most were.

No wonder it felt like a cloud had settled over the summer at a time when South Africa is usually at its most wonderful and carefree. Our people were dying in numbers not even witnessed during the height of the Aids pandemic, when almost a generation of young adults was wiped out.

The surge of deaths was higher than the first one in July 2020.

“We haven’t seen 20,000 deaths in a week at all,” Bradshaw says. “It was a bit shocking. I am a statistician, so I work with these numbers [all the time], and I know they reflect people. But with Christmas week and New Year week, it was very bleak. Those numbers are big. And it was impacting families across the country.”

The excess deaths report tracks when people die of natural causes (unnatural deaths are usually trauma-related, such as accidents or violence), and the number of excess deaths between 6 May 2020 and 5 January 2021 is 83,918 deaths.

How do you explain the difference? “It’s a bit challenging,” says Bradshaw. “We don’t know what the cause of death is. We don’t know whether it’s a Covid death or someone who had chosen not to go to a health service or had an emergency and could not get to the health service because of the Covid burden.

The pace of dying and living in a pandemic means we often push past the stats, getting on to the next day’s plan for survival and staying out of the viral path. But if we pause for a moment to take in the scale of our loss, it would be as if we filled 5,600 taxis with people at the excess death figure or, at the official Covid-19 tally, 2,533 taxis.

Each person is somebody’s somebody, and each is part of a human network of connections, spreading the grief out wide to almost every corner of the land.

Where does so much grief go? It can’t go to funerals, the channel for our mourning when we are norming. Funerals are regarded as Covid-19 superspreader events.

During the pandemic, but unrelated to Covid-19, I lost an uncle and a dear friend, one Muslim and the other Christian.

My uncle was 97 and had lived a full life, but the gazetted norm for all funerals meant we spent less than 30 minutes praying at his farewell; there was no week-long prayers, no 40-day gathering to mark the end of the mourning, when the raw pain recedes enough to laugh or smile at memories and be comforted by time and togetherness.

He was my father’s best friend and brother, and when my dad died many years ago, my cousins were there every day, the pillars of support and a foundation when you feel like yours is falling out from under you.

My friend’s funeral (which the family kindly let us attend even when numbers were so limited) was rushed to be under an hour to keep to the time set out in gazetted regulations. Memories and love are so ill-served by these fleeting goodbyes.

The Facebook funerals and Zoom memorials reveal the limitations of digital life, serving only to remind you of the essential nature of the tactile, and of communion and community.

If I could, I would put my 90-year-old mother in a permanent hazmat suit to keep her safe because Muslim funerals are now drive-bys where you pray to a hearse. The mere thought makes me pale; the fear infects my dreams and turns them to nightmares. I want her to be vaccinated – as I guess does every child of a parent and parent of a child. It’s no wonder there is rising panic about our government’s ham-fisted vaccine strategy.

“Last week, one of my best friends lost her mom to Covid-19. I formed a WhatsApp group. We made a collection. We went on the day. She was arranging accommodation for me in Eshowe [where the funeral would be held]. I had to tell her I couldn’t go as I have comorbidities,” says Mapi Mhlangu, the co-founder with Helena Dolny of Love, Legacy, Dignity, the social enterprise that helps people deal with death.

“The biggest thing is that we are grieving the loss of so many things, of the normalcy of ritual and of being there for each other. As South Africans, we love collective mourning, and we feel we should be there. And we haven’t been doing that.

“If I go on to Facebook and see a person has lost someone, I write ‘Strength and light’ and comforting words,” she says, but digital comfort is often a cold comfort.

In the case of her bereaved friend, she is planning to be there for the firsts: the mom’s birthday in March, the first month and all the times her friend will mark her loss.

“The process of being there is no longer a process of a week before the funeral. These are the things we need to learn now – how to be present for someone when the old ways are not available.”

Mhlangu says South Africa needs collective mourning – on national broadcasters, across radio, in newspapers and online – for our collective grief. She envisages front pages with only a lit candle to remember our fallen on a chosen day. Mhlangu says the use of 40,000 candles lit at US President Joe Biden’s inauguration was a powerful moment to learn from.

She says South Africans like President Cyril Ramaphosa’s “family meetings”, his Covid-19 addresses to the nation, “even if we make fun. We like the idea of a common place.”

Mhlangu says we need a common place of mourning across all faiths and beliefs to find a resting place for the common grief of the dying season. DM168