Arms caches could be buried all over South Africa by fr... 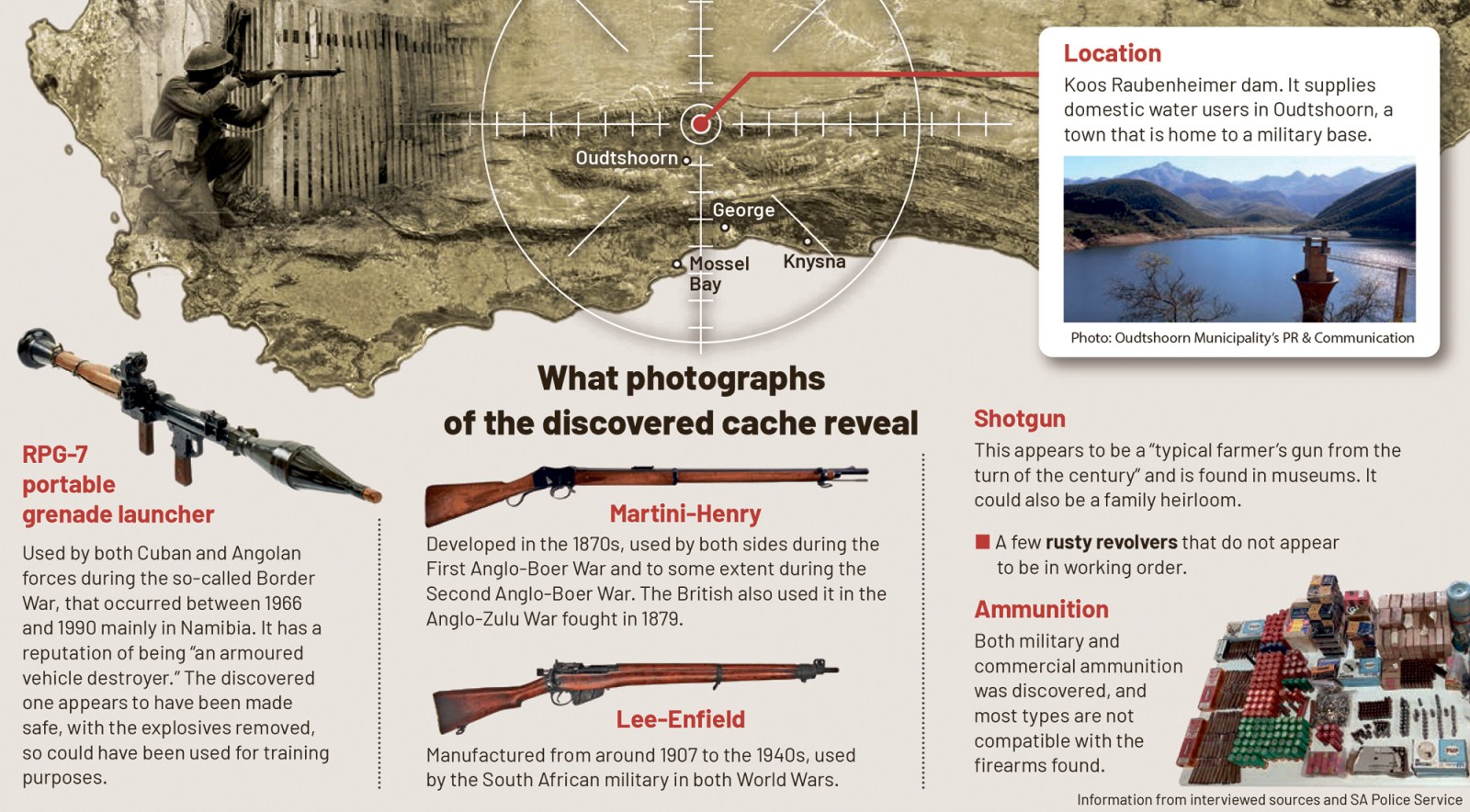 The stashes of weapons, the stories go, were to be used when either side felt the time was right to go ahead with a battle.

The saying “There must be something in the water” is often used to describe a situation involving several people with similar quirks or traits. It implies the link between them is something in the shared water source they drink from.

In the Klein Karoo town of Oudtshoorn the saying has taken on a more literal meaning because something intriguing was recently found in a source of water supplying the town: a cache of firearms and ammunition – some of it rusty, some of it in relatively sturdy-looking small cardboard boxes, and some of it shiny and looking quite new.

For several years, tales have floated around in police and political circles of how, decades ago, those fighting for democracy in South Africa buried mounds of firearms and ammunition in places that included cemeteries and national parks.

Similar tales of right-wingers having done the same have also surfaced.

The stashes of weapons, the stories go, were to be used when either side felt the time was right to go ahead with a battle. That point has never been reached and so the caches remain hidden across South Africa.

If any of these firearms were found today, or within the next week or so, handing them over to police would not necessarily result in prosecution, because SA still has a firearms amnesty in place, which ends on 31 January.

SA Police Service (SAPS) guidelines describe this as “An opportunity for members of the public to surrender unwanted firearms or firearms they possess illegally, as well as ammunition and/or firearm parts to [SAPS] without fear of being prosecuted for the unlawful possession of this equipment.”

This all makes the discovery of the firearms and ammunition in the dam outside Oudtshoorn, home to a military base, especially intriguing.

It appears that, if the cache was hidden rather than handed over to the police under the amnesty, the items may not be licensed, and the owner may be intentionally trying to avoid scrutiny. But there are other theories about the firearms and ammunition.

When Southern Cape police spokesperson Malcolm Pojie announced the discovery of the cache, he said a municipal worker had spotted the weapons during a routine inspection of the Koos Raubenheimer Dam in early January. It is understood the dam – which, according to a document on the Western Cape government’s website, was built in 1971 and is managed by the Oudtshoorn Municipality – had been closed to the public.

The municipal worker returned to the dam on 7 January after the water level had dropped further – and discovered more ammunition.

The police were alerted and a team of experienced investigators, as well as police divers and bomb disposal experts, were dispatched to the dam where they retrieved the firearms and ammunition. They found more of them.

According to police, the discovery included three Martini-Henry rifles, a BSA rifle, a .303 rifle, an antique shotgun, two revolvers and 8,820 rounds of ammunition of various calibres.

Pojie said: “Investigation into this discovery continues and [it] is expected that more ammunition could be retrieved. We appeal to any person that could assist to trace the person responsible for dumping these items to please come forward…”

Several photographs of the recovered firearms and ammunition were attached to Pojie’s statement that was issued to the media.

DM168 tried, via firearms industry experts, to identify the age and origin of the discovered items.

Some said it was not possible to do so, because the serial numbers were not visible in the photographs. They said some of the ammunition looked more modern than the firearms, suggesting police investigators would focus on this. Others provided some clues as to where the items could have originated.

John Welch, the chair of the National Arms and Ammunition Collectors’ Confederation of South Africa, said he did not want to speculate on how the items had ended up in the dam, but instead focused on what had been discovered.

Welch said: “The various photos in fact depict rifles, a handgun (revolver), a shotgun pistol, a variety of ammunition, ranging from .22 Rimfire to 12-gauge shotgun, and even a self-propelled rocket, which appears to be an RPG-7 that was fired (discharged) but either failed to detonate or was deactivated.”

He added that “the Russian/Cuban/Chinese/East German/Romanian/etc RPG-7 was used by Angolan and Cuban forces during the so-called Border War and had (still has) a reputation as an armoured vehicle destroyer”.

The Martini-Henry rifles were developed in the 1870s.

“The revolver also appears to emanate from that era. The ammunition for the Martini-Henry rifle is obsolete, but staunch collectors will reload their own ammunition since most well-looked after rifles are shootable, and … [it] still makes a good hunting rifle.”

Welch said Lee-Enfield rifles, used in both world wars, were manufactured between 1907 and the 1940s.

“Good quality Martini-Henri and Lee Enfield rifles are sought after by collectors … Many of these rifles are family heirlooms in the hands of licensed firearm owners … used primarily for target shooting and hunting.”

He said the shotgun appeared to be a typical farmer’s one dating to the previous turn of the century and that these were most often family heirlooms or to be found in museums.

The discovered ammunition, Welch said, appeared to be both military and commercial, “some of which is of recent history”. Except for one type found, it appeared none of the ammunition would fit the firearms depicted in the photographs issued by police.

Sias Fourie, a former police warrant officer involved in tactical training and public order policing, said that there appeared to be R5 rifle ammunition and various single bullets that seemed to be part of a collection for the purposes of training. He said the RPG-7 rocket was not highly significant.

“In the area where I come from … most of the trainers organised training aids such as that so the trainees could be shown what an RPG-7 rocket looked like in a safe manner.

There have been other firearm cache discoveries in SA over the years – some with suspected links to gangs and other crimes. On 2 December last year, a cache of firearms was discovered in a room on a farm in Kouga in the Eastern Cape, and a 58-year-old man was arrested.

In December 2019, police in Vanderbijlpark in Gauteng discovered 43 firearms and about 2,000 rounds of ammunition in a home. A 31-year-old was arrested “after he could not provide satisfactory answers or prove the validity of such a large quantity of firearms and ammunition”. DM168