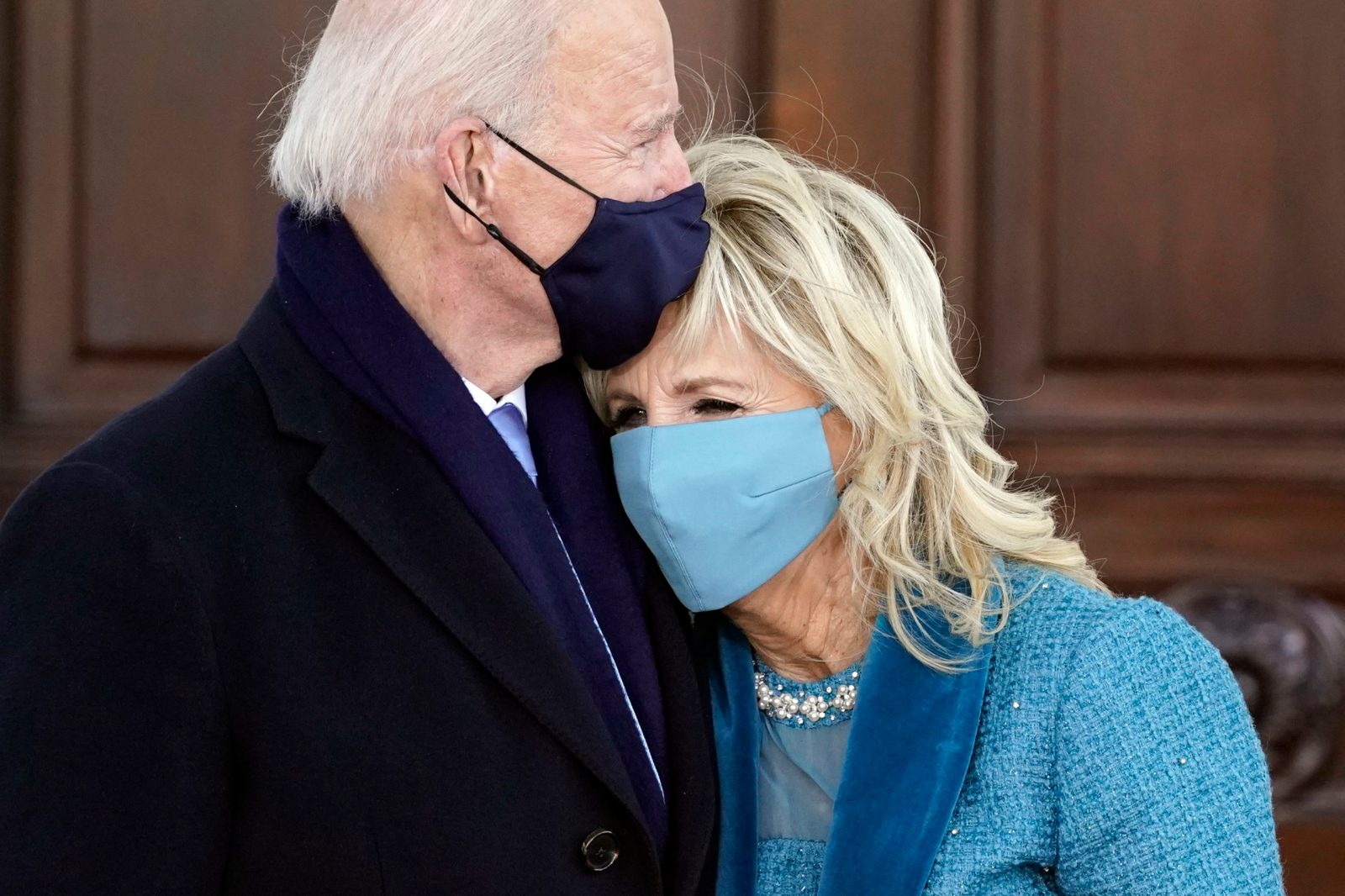 US President Joe Biden and first lady Jill Biden hug as they arrive at the North Portico of the White House, in Washington, DC, USA, 20 January 2021. Joe Biden was sworn in earlier on the same day and became the 46th President of the United States. EPA-EFE/Alex Brandon / POOL

In what he called ‘his first act as president’, Biden asked for a moment of silence during his speech for those lost to Covid-19. He paused for several seconds, bowing his head, before saying ‘amen’.

Joseph Robinette Biden Jr was sworn in as the 46th president of the United States, taking control of a nation wracked by a deadly pandemic, persistent unemployment and burgeoning social unrest to cap the most acrimonious transfer of power in modern American history.

Biden (78) took the oath of office shortly before noon from Chief Justice John Roberts on the steps of the US Capitol – the very spot overrun two weeks ago by Donald Trump loyalists, who waged a deadly attack seeking to block the Democrat’s ascent to the presidency.

“This is America’s day. This is democracy’s day,” Biden said as he began his inaugural address. “A day of history and hope, of renewal and resolve. America has been tested anew and America has risen to the challenge.”

The new president’s inauguration marked a stark reversal for the US electorate. After four turbulent years governed by Trump – who had never held public office – voters turned to a man who spent more than four decades in Washington, including 36 years as a US senator from Delaware and eight years as vice-president to Barack Obama.

Biden was joined on stage by his trailblazing vice-president. Kamala Harris (56) became the first woman, the first black person, and the first Indian-American to serve in the role. The former California senator was sworn in shortly before Biden by Supreme Court Justice Sonia Sotomayor.

The January 6 attack on the Capitol factored heavily into Biden’s address, and he took on the nation’s political divisions head-on, asking his opponents to give him a chance. But he was critical of the former president’s campaign to rile up his supporters over his re-election defeat.

“We’ve learned again that democracy is precious, democracy is fragile,” Biden said, a reference to his predecessor’s effort to overturn the election. “At this hour, my friends, democracy has prevailed.”

He added later that “politics does not have to be a raging fire, destroying everything in its path”.

“We must end this uncivil war that pits red against blue, rural versus urban, conservative versus liberal,” Biden said. “We can do this if we open our souls instead of hardening our hearts, if we show a little tolerance and humility, and if we’re willing to stand in the other person’s shoes.”

Yet Biden enters office facing historic challenges: Covid-19 has now claimed more than 400,000 lives in the US and rising infection rates in many parts of the country threaten to overwhelm hospitals and continue to pummel the economy. Meanwhile, the new president’s ability to muster a broad-based response to the pandemic risks being constrained by the narrow majorities Democrats hold in the House and Senate.

In what he called “his first act as president”, Biden asked for a moment of silence during his speech for those lost to Covid-19. He paused for several seconds, bowing his head, before saying “amen”.

He has already asked lawmakers to pass a $1.9-trillion bill that would provide additional funding for vaccination programs, extend unemployment benefits, send stimulus checks to many Americans, and raise the minimum wage – the opening salvo in what aides say will be a sustained push to restore the nation’s physical and economic health through ambitious spending programmes.

“We have much to do in this winter of peril and significant opportunities,” Biden said. “We’ll press forward with speed and urgency.”

He pleaded for Americans of all political persuasions to unify, acknowledging that “it could sound to some like foolish fantasies”.

“Today on this January day, my whole soul is in this, bringing America together, uniting our people, uniting our nation, and I ask every American to join us in this cause,” he said.

Biden on Wednesday became the oldest US president to be inaugurated. For a man who has spent decades roaming the halls of official Washington, the capstone of his political career unfolded unlike any in recent political history.

Trump, who has yet to acknowledge Biden by name as the election winner, skipped familiar rituals – including welcoming his successor to the White House and riding together to the Capitol – and instead left early on Wednesday for his Mar-a-Lago estate in Palm Beach.

Biden, who spent the eve of his inauguration at Blair House across Pennsylvania Avenue from the White House, attended a prayer service at St Matthews Cathedral with congressional leaders of both parties before heading to the Capitol.

With Trump ensconced in Florida, Vice-President Mike Pence – wearing a mask – represented the outgoing administration on the inaugural stage. The only other living Republican president – George W Bush – also attended the ceremony, as did Obama and Bill Clinton.

Biden offered a rebuttal of sorts of Trump’s 2017 darker inaugural address, in which the former president famously promised to end what he called “American carnage” in US streets.

“Together we shall write an American story of hope, not fear; of unity, not division; of light, not darkness,” Biden said shortly before concluding.

The backdrop of Biden’s inauguration was anything but normal. With concerns over additional violence, some 25,000 National Guard soldiers had been deployed throughout the capital, with barricades and tall fencing blocking access to much of the downtown core. And because of the pandemic, large gatherings had already been scrapped – instead, nearly 200,000 US flags were planted as part of a large public art display on the National Mall to honor the victims of the deadly virus.

The scene offered a stark reminder of Biden’s campaign theme, which he described as a “battle for the soul of the nation”. Yet there were moments of delight: pop star Lady Gaga sang the national anthem, holding a golden microphone, while country star Garth Brooks sang Amazing Grace after Biden’s address, asking the audience to join with him.

“He takes office at a very difficult time, perhaps the most difficult time that any president’s taken office since Roosevelt, and he comes into office determined to get to work on these crises immediately,” said incoming White House Chief of Staff Ron Klain, referring to Franklin Roosevelt’s presidency, which began in 1933 during the Great Depression.

Biden planned to sign more than a dozen executive actions on his first day – more than any previous president. Some are aimed at overturning actions taken by Trump: Biden plans to rejoin the Paris Climate Accords, end a travel ban from predominantly Muslim nations and halt construction of the wall at the US-Mexico border. Others – including a requirement to wear a face mask in federal buildings – are intended to signal new priorities in the fight against the coronavirus.