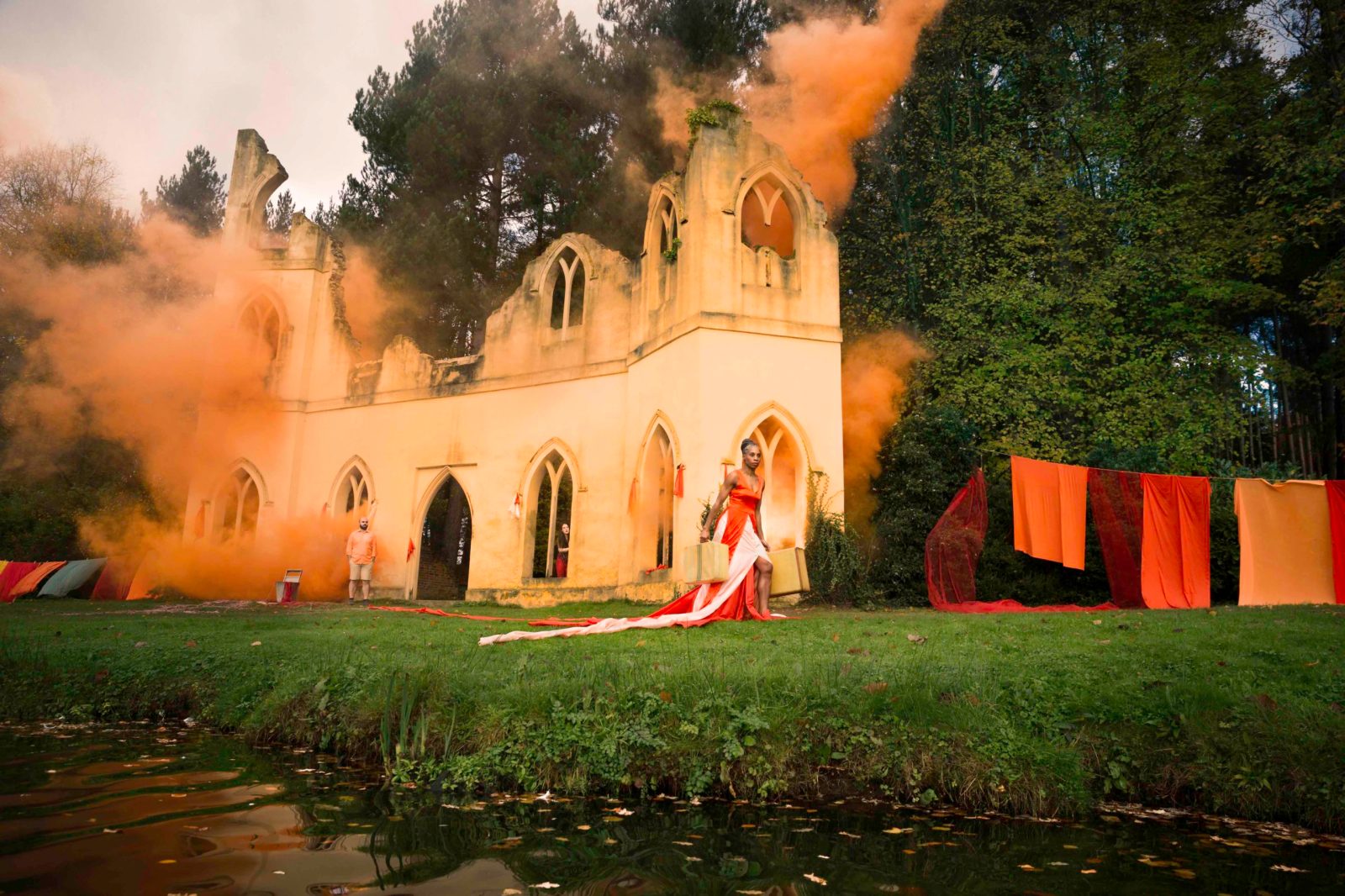 Power, from 'The Spiral of Containment: Rape’s Aftermath' exhibition. Photo by Elisa Iannacone

Mexican-born cinematographer, Elisa Iannacone, whose career traversing over 40 countries in service of breaking news and war photo-journalism, is a rare mix of documentary and fictional cinematographer, of war correspondent and fantastical realist, of artist and journalist.

This story was first published on 21 January 2021 and has since been updated to reflect the exhibition at Constitution Hill.

Iannacone first came to public prominence with a photographic and multi-media installation at the Oxo Tower Bargehouse Gallery in London in March 2018. The Spiral of Containment: Rape’s Aftermath is a monumental exhibition on rape and its aftermath.

The 24 photographs in the series each stretch over 1.5m and were constructed into an experiential journey through five floors of the Oxo Towers. They included photographs, soundscapes, oral testimony and holographic images of two dozen men and women — their brutal stories depicted in striking, glossy images that cover vast fantasy-scapes.

Now, Iannacone’s work has been specially curated to fit the confines of the stark Isolation Cells in a walled-off, discrete section at the bottom of Number 4 Prison, Constitution Hill, until 30 June 2022. The exhibition provides the spectator with a chilling, depressing, and uplifting insight into the scourge that afflicts at least 30% of women — and men — in our country, and across the world, in varying percentages.

Each work is a composite real/unreal mise-en-scène depicting one person’s private journey beyond their sexual violation to a place of creative reconstruction and re-creation.

Evocative and gut-wrenching, each piece took months to complete as the subject/co-author and Iannacone traversed each personal journey, emerging with one encapsulating image depicting their triumphant transition from pain and devastation in a single dominant colour drawn from the 24-colour wheel.

Iannacone drew her inspiration – and Spiral project – from her own rape and the long and painful journey of self-healing, which included a combination of art therapy, narrative discourse and visual representation. It concluded the endless months of darkness, inarticulate silence and incomprehension.

For years, Iannacone envisaged her violation in an image of herself, naked and vulnerable with broken wings. When she began speaking to others, she realised that each person experienced their own assault in very different terms; each evoking a unique image which she then set about capturing evocatively, artfully and whimsically, leveraging her considerable skills as a cinematographer.

She brings into the ‘documentary’ moment a tale of transcendence and light, almost mystical. Totally encompassed in the best of artistic filmic manipulation – crossing the boundaries between hard realism and almost magical realism in the Latin American narrative tradition, Iannacone’s own portrait is the 25th image – a monochromatic hologram.

Each of her subjects are defined by the totemic colour that emerged during the process and they come from across the globe, including South Africa. One image (‘Yellow’), shot at Ponte Towers in Johannesburg, is of a woman wearing a yellow dress strung across the centre of the concrete structure.

Under Iannacone’s expert cinematographic hand, images of brutality and horror are rendered as baroque floral studies, or set in fairytale castles or funfairs, in rich magentas, cyans and violets.

For her, it is all about reframing convention and changing the dialogue or imagery from disempowered and violated, rape or war victim or victim of systemic injustice, to empowered and self-actualised, narrator and activist.

Hence the title of her new venture, Reframe House, which “emerged as the collision between art and social justice” and continues to take on assignments that fall between these polarities.

“Where so often war and rape take away agency, here, the ‘victims’ not only tell their own story and gain agency through co-creating the image (versus being objects of depiction and pity), but the subjects/authors/actors regain/renew/reinforce/recreate their identities as they narratively and visually compose their biographies, mastering the image and even exorcising their pain. They take control of the image that is depicted of them.”

This hybrid style, Iannacone acknowledges, is convention-breaking. When it comes to depicting reality, brutal grainy realism is and has often been the dominant medium. Black and white imagery for so many decades was seen as “real” and the medium to master as documentary, news and war photographers, largely because the technology had dictated this convention, while fashion and fiction filmmaking dominated the colour palette.

“I take my inspiration from Ellen Kuras, ASC (acclaimed cinematographer whose work crosses over the conceptual silos).”

For this contradictory crossover, she takes her inspiration in both her Mexican roots and South Africa’s current reality: vibrant, colourful, lively, passionate, warm, generous, friendly – and yet there is the underbelly of deep social schisms: violent crime, human distress, poverty.

It is from Mexico that she borrows the spectacular tradition of magical realism.

“Literature-based, it paints pictures in your mind. In ‘Water for Chocolate’, she cried so much that the living room flooded and everything floated away…”

Iannacone was born in Mexico to Mexican-Canadian parents and studied filmmaking at York University in Toronto. It was on her first assignment, on a 16mm film project, that she was designated cinematographer. She had found her metier.

On graduation, she and a fellow graduate built a business producing corporate films which financed their social justice work. It was on a trip back to Mexico on an assignment that she was raped by an extended family member.

The rape derailed her career and Iannacone withdrew from the light, working in telesales for a theatre group in Canada, her wings broken, struggling in the dark.

In 2012 she tackled a Masters in International Journalism through City University, London, specialising in conflict, and set about forging a career as a foreign correspondent and documentary cinematographer.

She spent the next years covering some of the most explosive stories on the planet for global behemoths like BBC World News, Newsweek, National Geographic, including the devastating 14 August 2013 Rabaa massacre in Cairo, Egypt, which was recorded by Human Rights Watch as “one of the world’s largest killings of demonstrators in a single day in recent history”.

In Jordan, she documented the story of Syrian refugees, followed by assignments in Iraq, the Sahara and Mozambique, while also working on the Spiral project; evolving the process of therapy and visual reconstruction over that time. That process took five years and was funded from Iannacone’s war journalism and cinematography.

Now, Spiral of Containment is at Constitution Hill — the exhibition is made visceral by the presence of the photographer and survivors, such as Martin Pelders, (‘Verdigris’), a male survivor, who today, through his NGO MatrixMen is an outspoken advocate of sexual justice for all children, of all genders. In his image, ‘Normal’, an adult man crouches in a cot, hiding from his maternal aggressor. It took Pelders four decades to speak out. Deborah Ho-Chung (‘Crimson’) whose ‘comical’ image as a bank robber with a toy gun (just one of the icons that make up her dramatic biography), Big Bonnie, Bicycle Thief, also spoke up on the day of the exhibition’s opening, providing insights into the pain, and perversion, of the trauma, recovery and reclamation.

UK-based Iannacone was in South Africa to launch the exhibition and complete a residency at Nirox Foundation, where a large-scale, site-specific version of Staying Afloat marks her visit. After completing nine works in a new series on children and trauma, including a suite of five portraits for the Nelson Mandela Children’s Hospital’s fifth anniversary, the Mexican-Canadian social justice documentarist, returns to London to assume the mantle of 2022 Canon EMEA (Europe, the Middle East and Africa) ambassador for a global photographic organisation.

The exhibition will continue to tour globally to select heritage and museum spaces, and commercially, on the art fair circuit, following the exhibition of four key works at the recent Investec Cape Town Art Fair. DM/ ML

Elisa Iannacone’s work can be viewed in South Africa at Constitution Hill until 30 June 2022 and Nirox Sculpture Park exterior installation. The full exhibition, including soundscapes and images can be viewed here. To read more about the photographer, click here.