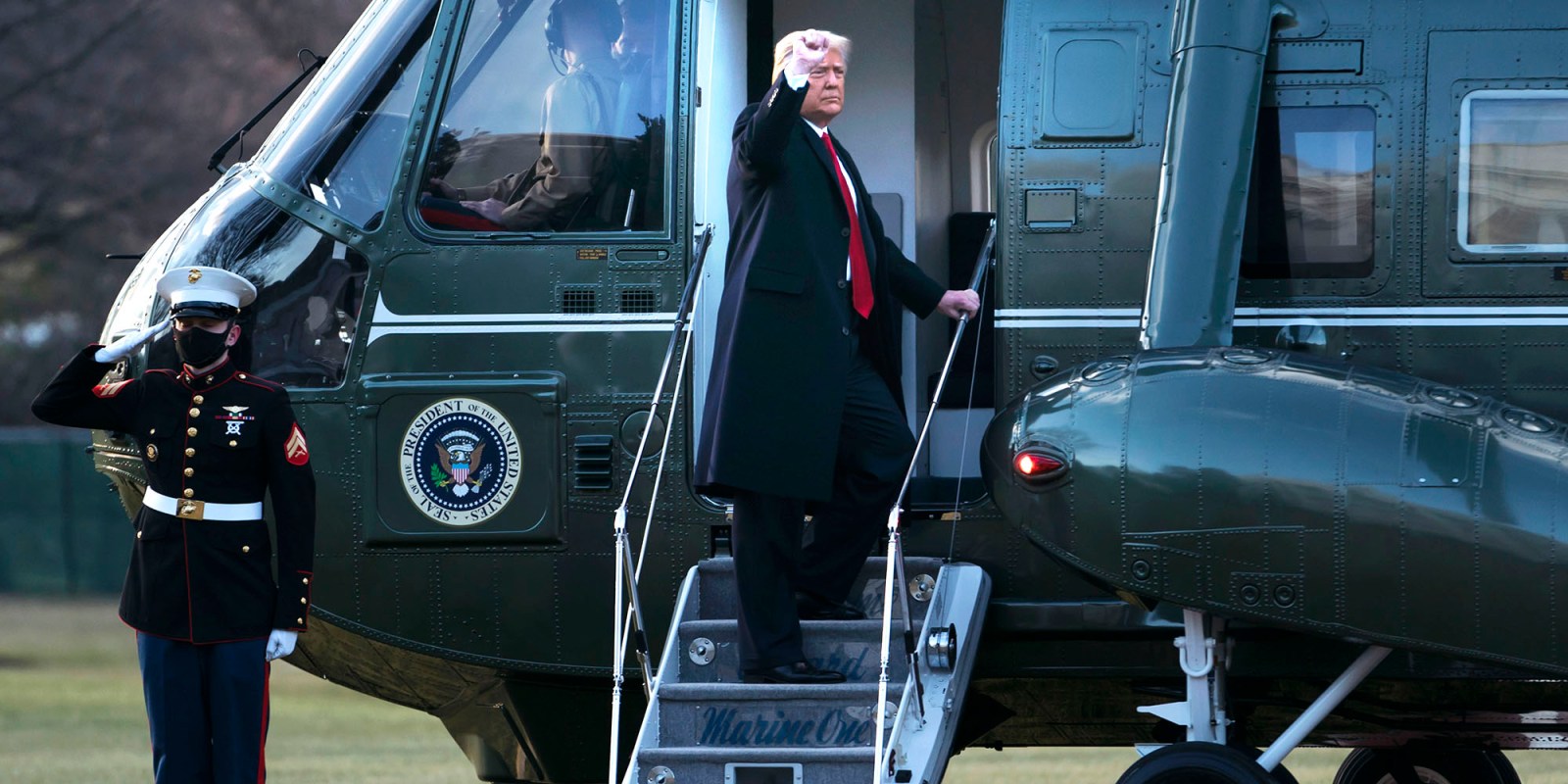 Trump was greeted on the tarmac by his family on a cold and blustery morning as his standard campaign rally soundtrack played in the background.

Donald Trump departed the White House a final time as president Wednesday, skipping Joe Biden’s inauguration and instead throwing a military-style send-off for himself before leaving for his Florida resort.

“I will always fight for you. I will be watching, I will be listening, and I will tell you that the future of this country has never been better. I wish the new administration great luck, great success,” Trump said at Joint Base Andrews outside of Washington before boarding Air Force One a last time.

Trump was greeted on the tarmac by his family on a cold and blustery morning as his standard campaign rally soundtrack played in the background. He spoke following a 21-gun salute and a rendition of “Hail to the Chief.” Several of his closest advisers were in attendance, though key Republican allies on Capitol Hill, several Cabinet members and his own vice president didn’t attend.

He spoke for about 10 minutes, most of which he spent listing his administration’s achievements and claiming success in dealing with the coronavirus pandemic that has claimed more than 400,000 lives in the U.S.

Trump didn’t mention Biden by name in his remarks, and he becomes the first U.S. president since the 19th century to skip his successor’s swearing-in ceremony. Trump didn’t speak to Biden, but left a note for him at the White House, according to people familiar with the matter.

Before boarding the plane to Palm Beach, Florida, where he plans to take up residence at his Mar-a-Lago resort, Trump told the crowd: “Have a good life. We will see you soon.”

Trump’s departure marks the end of one of the most divisive and chaotic presidencies in modern U.S. history. His term hit its nadir on Jan. 6, when the outgoing president incited a mob of his supporters to storm the U.S. Capitol in a failed but deadly attempt to stop lawmakers from certifying his electoral defeat.

He leaves Washington in a state of military lockdown, with roughly 25,000 National Guard troops deployed across the city to protect against further attacks on the government. Tall fencing surrounds the White House and Capitol; roads and bridges have been barricaded to curtail access to the National Mall.

The White House had difficulty finding guests to attend the farewell ceremony for Trump, who alienated allies and staff with unusual speed and frequency throughout his tenure. Some key figures in his administration and partners on Capitol Hill — including Senate Majority Leader Mitch McConnell and top House Republican Kevin McCarthy — declined the invitation, according to people familiar with the matter.

The White House made some curious choices for its invitation list. Several former Trump aides who became outspoken critics of the president received invitations, including financier Anthony Scaramucci, who was briefly the White House communications director in 2017, but by 2019 was publicly advocating for Trump’s impeachment.

Former Chief of Staff John Kelly and former National Security Advisor John Bolton and his deputy, Charlie Kupperman, were also invited. None of them attended.

While some fell out with Trump over policy matters, others have distanced themselves from him since the violent insurrection two weeks ago that left five people dead, including a U.S. Capitol Police officer. The episode resulted in Trump’s impeachment, making him the first president to be impeached twice. The Senate is expected to begin his trial after he is out of office.

Just two days after the riot, Trump announced his decision not to attend Biden’s inauguration. Authorities are concerned about more violence, resulting in an unprecedented security perimeter complete with high fencing and military vehicles around the heart of the nation’s capital.

At the same time, Trump leaves the nation reeling from a raging coronavirus pandemic that has killed roughly 400,000 people in the U.S. and crushed the economy. While the emergence of vaccines could bring down infection rates, the nation is still suffering from the economic cost of pandemic-related shutdowns. DM