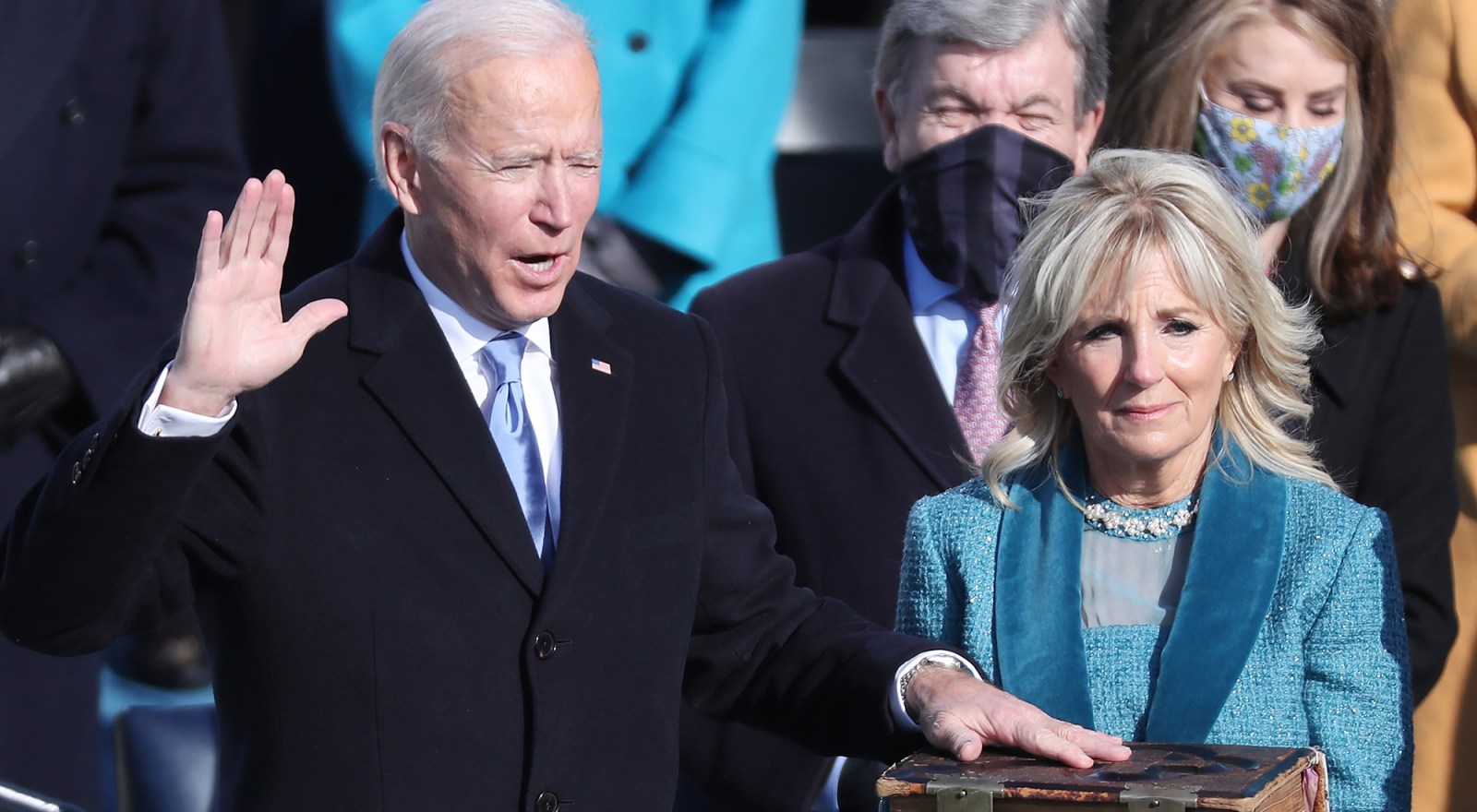 Following the Capitol riot two weeks ago, when Donald Trump supporters tried to stop the confirmation of the 2020 election, the inauguration of President Joe Biden and Vice-President Kamala Harris went off without a hitch, and not a maskless face in sight.

The inauguration ceremony started promptly at 11.30am with a prayer by Reverend Leo Jeremiah O’Donavan:

“Today we confess our past failures to live according to our vision of equality, inclusion and freedom for all. Yet we resolutely commit still more now to renewing the vision, to caring for one another in word and deed, especially the least fortunate among us.”

Lady Gaga then sang the national anthem before the Pledge of Allegiance was led by firefighter Captain Andrea Hall, who also signed it.

Harris was then sworn in by Supreme Court Associate Justice Sonia Sotomayor. Harris was escorted to the inauguration by police officer Eugene Goodman, who led rioters away from the floor of the US Senate. Goodman is now the acting deputy sergeant at arms in the House.

Latina singer J.Lo then sang This Land Is Your Land, before the swearing-in of Joseph R Biden as the next president of the United States.

At 11.49am EST, Joe Biden becomes the 46th president of the United States of America “So help me God”.

First lady Jill Biden can be seen visibly moved and teary-eyed as he makes his oath. Moments after completing his oath, Biden turns and gives a thumbs-up to his vice-president. Harris beams back at him.

Instead of the 200,000 people who would usually attend, state and territory flags were set up on DC National Mall, representing the absent crowds. A combination of concerns around Covid-19 had initially led to Biden calling for as few people as possible to attend. Following the attempted insurrection two weeks ago, security concerns mandated it.

Biden and Harris arrived at Capitol Hill at 10.30am after attending services at the Cathedral of St Matthews the Apostle, about six blocks away from the White House. Stepping out of the motorcade, Harris and Biden appeared calm and excited. It was very clear that there were big smiles behind their masks.

The Clintons and Obamas arrived at the Capitol just after 10am, as did former president George W Bush and his wife, Laura.

Inauguration goes off without incident

Security at the Capitol complex was tight – with about 25,000 National Guardsmen in place. Local media reported that a bomb threat had been made on the US Supreme Court, but received an “all clear” – the building is closed and likely unoccupied. Around the Capitol Complex, the streets were quiet.

Many Americans seem ready to move forward, wanting to put the violence of the Capitol riot behind them – many citizens have turned in family members, friends and even classmates in response to the FBI calling on the public to help find the people who had rampaged through the national Capitol.

The FBI has reported more than 300 open and active cases as it investigates who was involved and finds more of the people who had been part of the mob.

“We will be back in some form” – Donald Trump’s parting words as he left the White House for the last time this morning after issuing about 140 pardons and commutations late last night.

Trump stepped aboard Marine One on the South Lawn of the White House  just after 8am, leaving for Joint Base Andrews, where he said goodbye to what looked like a few hundred of his staff and their families, who had gathered to send him off.

At 9am, in the last 120 or so minutes of being president of the United States, Trump took off on Air Force One, leaving the White House permanently behind him and heading to Mar-a-Lago.

Late Tuesday night, Trump granted pardons to 73 people and commuted the sentences of 70. A list of people ranging from rappers to racketeers, for a range of crimes including bribery, extortion and possession of a firearm. Included in the list was his former strategist Steve Bannon, arrested last year for taking money from a fund supposed to go towards building Trump’s (in)famous wall.

A day of firsts

Besides being the most heavily guarded inauguration and the first with flags instead of crowds, history is being made in who now holds office in the US.

An Wentzel is Night Editor, specialist reporter for Daily Maverick, based in the USA.