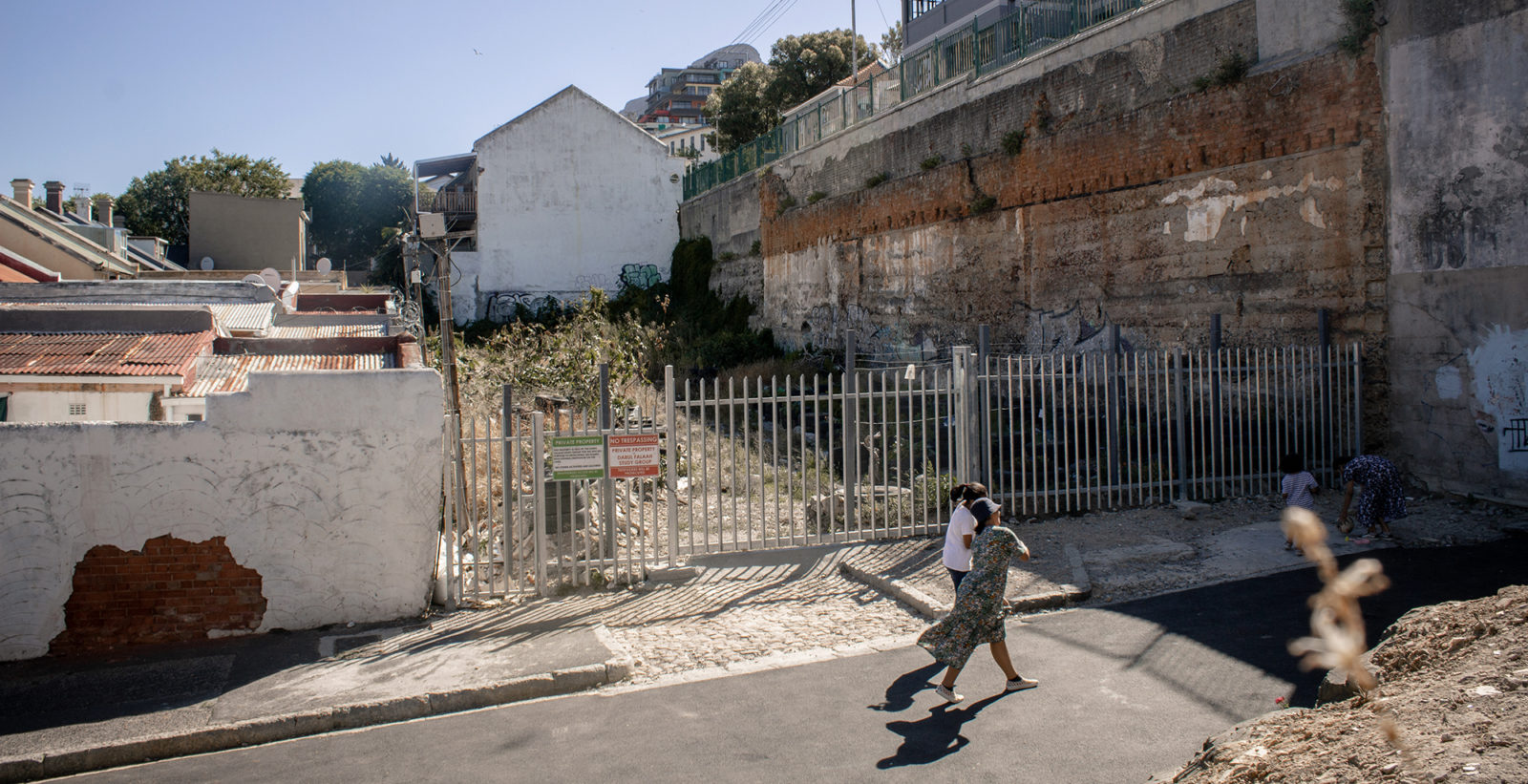 The Sustainable Bo-Kaap Association (Suboka), which transformed a plot of land into a food garden intended to ensure food security for the community during the pandemic, are desperate to keep the garden alive after the gates were locked in 2020. (Photo: Victoria O’Regan)

Residents of the tight-knit Bo-Kaap community in Cape Town are torn over the use of a plot of land for a food garden, started to provide food security during the pandemic. The dispute comes before court on Friday.

“Private property”, “Trespassers will be prosecuted” read two signs on the gate of an organic food garden in Bo-Kaap, Cape Town which has been locked since October 2020. A smaller pedestrian gate was locked in December.

Use of the land is being contested by:

Suboka and parties involved in the land contestation, including the trustees of the land, will head to court on Friday after Suboka filed a court order on 12 January.

The food garden is on a corner on Pepper Street, alongside a cul-de-sac where the neighbourhood’s youngsters often play. It has brought anything but peace to this part of Bo-Kaap.

However, when Daily Maverick visited the area last week, neighbours said that there had been “zero” consultation with the community before the garden was grown, and that no permission had been given by the trustees of the land.

Moreover, the residents of neighbouring Byrant and Pepper Streets are offended over disregard for the land’s symbolic administration as an Islamic endowment, known as “waqf” land.

Land use in Bo-Kaap is a frequent concern, said Brandon Golding, the city councillor for Ward 77, which includes the Bo-Kaap.

“From a sentiment standpoint, there are strong opposing views across Bo-Kaap,” he said.

Bo-Kaap, located above Cape Town’s CBD, has historically been home to the city’s Muslim community, and has survived apartheid-era forced removals, unlike the communities down the road in District Six.

The 695m2 of land is waqf land, according to a statement on the land contestation released by trustees on 6 January.

The Islamic term “waqf” denotes an endowment used for a specific charitable purpose established by the endower, said Muhammad Carr, an imam at the local Awwal Mosque.

The endower singles out beneficiaries of the waqf, Carr said.

“It’s like a charity that you give, but it’s a perennial charity.”

In this case, the land has been endowed for the purposes of establishing an Islamic educational institution, the trustees said in their statement.

Carr said the conditions of the endowment cannot be violated except under exceptional circumstances.

Booley disputed these claims, saying that the land, bought via community fundraising by the Islamic teacher Sheikh Booley who died in 1982, belonged to the community because waqf land is to “be used for the purposes of caring for the poor and needy, in a sustainable manner”.

Alongside the garden activity, Suboka is using the land as a place of teaching and as a recycling centre for the community to bring household waste to be used as compost.

“We are simply making use of the land for its intended purpose. If the community decides to use the land for building something we will move the garden elsewhere in the area,” Booley said.

She also alleged that the land “is not capable of ownership as private land”.

Golding confirmed to Daily Maverick that the land is private property owned by the Darul Falaah Study Group.

“If the property owner has the right, they assert their rights, irrespective of sentiment,” Golding said.

He said that Booley had called him on 6 August 2020 about the garden initiative and land use. He had informed her that Suboka would need consent from the owners, or to arrange with the study group to sign an interim lease, before carrying out any activity on the land.

Booley denied this, saying that she had asked Golding in August to get the City of Cape Town to assist in removing rubbish from the property.

She said Golding never told her that she would need consent from the owners.

An issue of permission

According to the January 6 trustee statement, Suboka did not receive permission to commence activity on the land.

Booley told Daily Maverick that Suboka had approached the trustees and developers for permission, but never got a final response.  She claimed that she initially had received support from one of the trustees., which was later withdrawn.

A letter administered by the Universal Islamic and Cultural Trust (UICT) on 22 September confirmed that Booley had requested permission to use the land.

According to this letter, the land had remained undeveloped because of queries about the proposed plans for it by the City of Cape Town.

Booley said she had contacted the UICT in 2019 to inform them about criminals using the land and proposing it be turned into a food garden.

She said that during “conflicting” communication with the UICT, she was informed that a place of education would be built in 2020.

“[UICT] kept promising to revert to me, but never did,” she said.

In July 2020, when the impact of the lockdown became so severe that the community ran out of food, Booley felt it was time to start the food garden.

Selman Kuzucu of the UICT, in the 22 September letter, said the president of the organisation would have to consider the request. In the letter, he said: “From my understanding of ‘waqf’ and the intention attached to the property, I did not believe that her project… would be suitable for this particular plot of land.”

The letter also stated that Booley would need the approval of “all” the neighbours before any approval was considered.

Booley told Daily Maverick that the food garden enjoyed universal support within the community. “No one objected and many people applauded the idea,” Booley said.

But the UICT’s letter said neighbours were opposed to the project and had demanded action to clear up the property and fence it off properly to prevent future occupation.

Daily Maverick spoke to four residents neighbouring the land, three of whom asked to remain anonymous because of the “slander” spreading about the issue.

Two sources said that there had been “zero” consultation with Suboka about the land use.

Resident Kassiem Said told Daily Maverick he had initially supported the initiative, but after the community received a letter of objection from the trustees he stepped aside.

Residents said their gripe was not about the food garden per se. “There is a process… that is being deliberately ignored, and substituted with a popularity contest,”  said one.

“It is like land grabbing,” said another resident. “If it is not yours to take, you don’t take it,” agreed another.

Residents also mentioned “smaller” inconveniences, such as the playing of loud music and dancing in the garden.

Before Suboka started the garden, the vacant land had become “plagued with crime”, said Booley. “It has been, varyingly, used by gangsters and criminals, drug dealers, drug users, drinkers and prostitutes. It has also been used as a rubbish and rubble dump.”

“That is totally untrue,” said Ebrahim Christian, the head of the Neighbourhood Watch in Bo-Kaap. “We patrol the area, and maybe once or twice have we found vagrants there doing their thing.”

Golding said homeless persons had occupied the land a few years ago, “but I wouldn’t say it was a crime spot”.

Suboka has been asking for the gates to be opened to access the garden, but with no success.

The garden is managed and cared for by the 100-odd Suboka members, most of whom are elderly women, said Booley.

“They rely on the food they harvest at the garden, to feed themselves and their families,” she said.

According to a community WhatsApp group chat, one resident, who does not have a job, said that the food garden was providing financial assistance for herself and her husband, a pensioner.

“There are other pensioners that now have to go and buy with their meagre amount of pension money,” the community member said.

Another member has calculated that if she applies methods taught in a permaculture course that the association offers at the garden, she would save about R36,000 a year.

Participants were taught to grow food with minimal space and with whatever was available, said Kothar Adams about the initiative, which could sustain a family for up to five years.

The haves and the have-nots

Booley said the dispute over the land is part of a longstanding class war in the Bo-Kaap between the “haves and the have-nots”.

The “haves” largely reside in the lower part of Bo-Kaap, and in the area near the garden, Booley said. The “have-nots” live in the Schotsche Kloof Flats, a sub-economic area at the top part of Bo-Kaap, she said.

Most Suboka members reside in Schotsche Kloof Flats, which has become economically devastated during lockdown, she said.

Booley confirmed that she has another registered NPO, Give to Grow. She hopes to use the Bo-Kaap initiative to replicate sustainable gardens elsewhere, via Give to Grow. Suboka’s registration application is being processed. DM

*Daily Maverick approached the DFSG trustees and the UICT on several occasions but they refused to speak to the media.

* This article was updated with additional information for clarity at 8.20am on January 21, 2021.