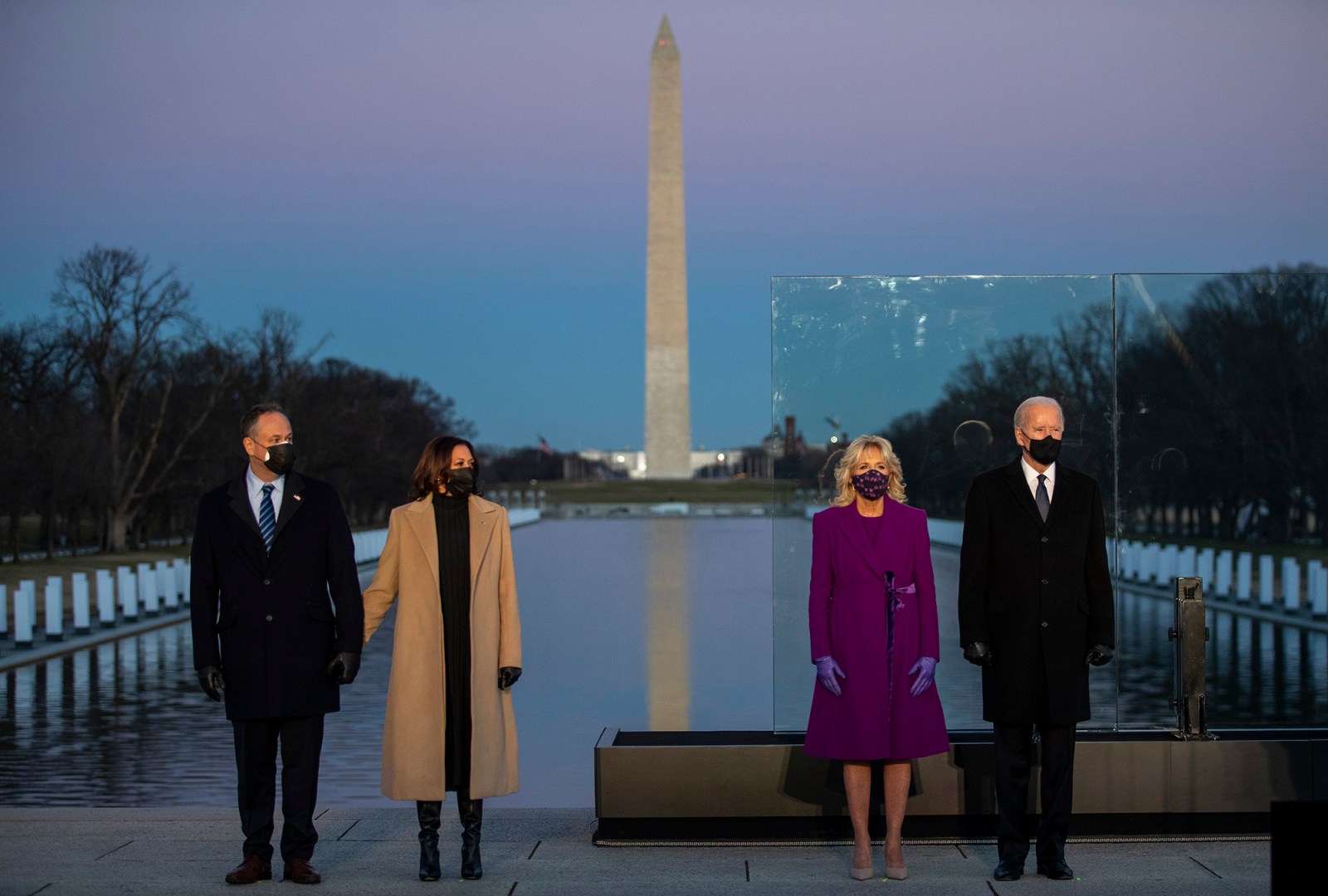 President-elect Joe Biden, with Dr. Jill Biden, and Vice President-elect Kamala Harris, with her husband Doug Emhoff, participate in a COVID memorial event at the Lincoln Memorial in Washington, DC, USA, 19 January 2021. Joe Biden will be sworn in as the 46th President of the United State during a ceremony at the US Capitol on 20 January. EPA-EFE/SHAWN THEW

The president-elect, on the eve of taking office, speaks to a nation in mourning for 400,000 loved ones who died from Covid-19, while at the Capitol the vetting of National Guardsmen deployed for the inauguration leads to the removal of 12 soldiers.

Touching down in Washington DC on Tuesday, 19 January, the day before the inauguration, President-elect Joe Biden and Vice President-elect Kamala Harris attended a memorial ceremony at the Lincoln Memorial. In a short speech he said:

“I mean this from the bottom of my heart, if there are any angels in heaven, they’re all nurses… To heal, we must remember. It’s hard sometimes, to remember, but that’s how we heal. It’s important to do that as a nation.”

Harris said that “… for many months we have grieved by ourselves. Tonight we grieve and begin healing together. Though we may be physically separated, we, the American people, are united in spirit, and my abiding hope, my abiding prayer, is that we emerge from this ordeal with a new wisdom”

She introduced Detroit nurse Lori Key, who had worked with Covid-19 patients. Key sang Amazing Grace at the ceremony.

Earlier in the day, security vetting of the National Guardsmen deployed to protect the national Capitol saw 12 troops removed from security duty for questionable past behaviour. Two of them had sent texts or made comments that were “inappropriate”. No other explanation or details were given for removing the 12.

The FBI is warning that extremists plan to pose as the National Guard to infiltrate the inauguration. The chief of the National Guard Bureau, Army General Daniel Hokanson, said 10 of the 12 were identified by FBI screening. He spent some time last week explaining – not very successfully – to CNN’s Jake Tapper why the National Guard had not been at the Capitol on 6 January.

CNN’s @jaketapper presses Gen. Daniel Hokanson, chief of the National Guard Bureau, on the response to the attack at the US Capitol.

“Our folks did everything that they were asked to do by their governors,” Hokanson says. pic.twitter.com/z6PLla15Bj

On Tuesday morning, Hokanson, responding to a question about the FBI’s concerns about infiltration of the National Guard, said he did not think there would be any threat from inside the National Guard: “We don’t allow extremism of any type in our organisation.”

The National Guard vetted troops “throughout the process”. Of the vetting ahead of the inauguration, he said “this type of vetting is standard – with all of these events it’s just based on the size. Here it’s gotten a lot of attention.”

“We don’t allow extremism of any type in our organization.” -Gen. Daniel Hokanson, chief of the National Guard Bureau, tells @SavannahGuthrie pic.twitter.com/6ATLlUVMZb

Commenting on the removal of the troops, Pentagon spokesperson Jonathan Hoffman said not all of them had ties to right-wing groups and two had said or texted inappropriate comments about the inauguration. Hoffman added they were “taking no chances”.

The FBI has also reportedly heard chatter that extremists and QAnon members have reviewed maps of parts of the city that could be considered soft targets. Acting Secretary of Defence Christopher Miller said they had no intelligence about any insider threat but are “leaving no stone unturned”.

Security is tight around the Capitol complex, the National Mall is closed to the public and large parts of downtown Washington DC are off limits. More federal marshalls have been put on flights coming into DC and more security dogs are being placed at airports.

There are also security concerns around Biden’s journey to the Capitol for the inauguration. He has a long history of taking the train from his home town of Wilmington, Delaware to Washington DC – a 75-minute ride. He’d planned to do the same on Tuesday but following the insurrection was flown to a military airbase just outside DC.

Vice-President Mike Pence is scheduled to attend the inauguration, while outgoing President Donald Trump has said he will not. Trump had been expected to announce a list of 100 pardons early on Tuesday, but instead released a recorded farewell message in which he wished the incoming administration “luck – a very important word”. He said he was very proud of all that had been achieved during his time in office:

“I stand before you truly proud of what we have achieved together. We did what we came here to do and so much more.”

Somewhat woodenly, and seemingly without irony, Trump also said: “All Americans were horrified by the assault on our Capitol; political violence is an attack on everything we cherish as Americans. It can never be tolerated.”

The outgoing president went on to make various claims about successes achieved while he was in office. The Washington Post took the trouble to immediately fact-check and highlight the falsehoods in his speech.

Republican minority leader Mitch McConnell also spoke out against Trump on Tuesday, saying he had “provoked” the mob that attacked the Capitol two weeks ago. McConnell’s comments preceded a scheduled meeting with Democratic leader Chuck Schumer to discuss how the Senate will operate, but there was no word yet on when the impeachment trial will start.

Meanwhile, in Polk County, Florida, a deputy sheriff was arrested on Tuesday after a conversation with a fellow deputy on the evening of 6 January after the riot at the Senate. He is also reported to have sent messages containing threats and statements including: “The streets should run red with the blood of tyrants.” He is facing a charge of making a written threat. Sheriff Grady Judd, who arrested the deputy, said it was important to make the arrest, especially before the inauguration.

The inauguration of Biden and Harris is on track for Wednesday. Shortly after winning the election Biden had said he was in favour of an event with as few people present as possible, owing to the pandemic.

The ceremony will be largely without physical crowds – excluding the 25,000 National Guard troops – due to the pandemic and security concerns following the Capitol riot two weeks ago. Normally about 200,000 tickets would be available to the public, but only about 1,000 members of Congress, and their guests, will be present. Former presidents Barack Obama, Bill Clinton and George Bush will also attend.

The inaugural ceremonies start – at about 6.30pm South African time – with the national anthem followed by an invocation. Harris will be sworn in shortly before 7pm, with Supreme Court Justice Sonia Sotomayor officiating. Harris’s husband, Douglas Emhoff, will be the first Second Gentleman of the US.

Biden will then be sworn in on the Capitol’s West Front by Chief Justice John Roberts. DM