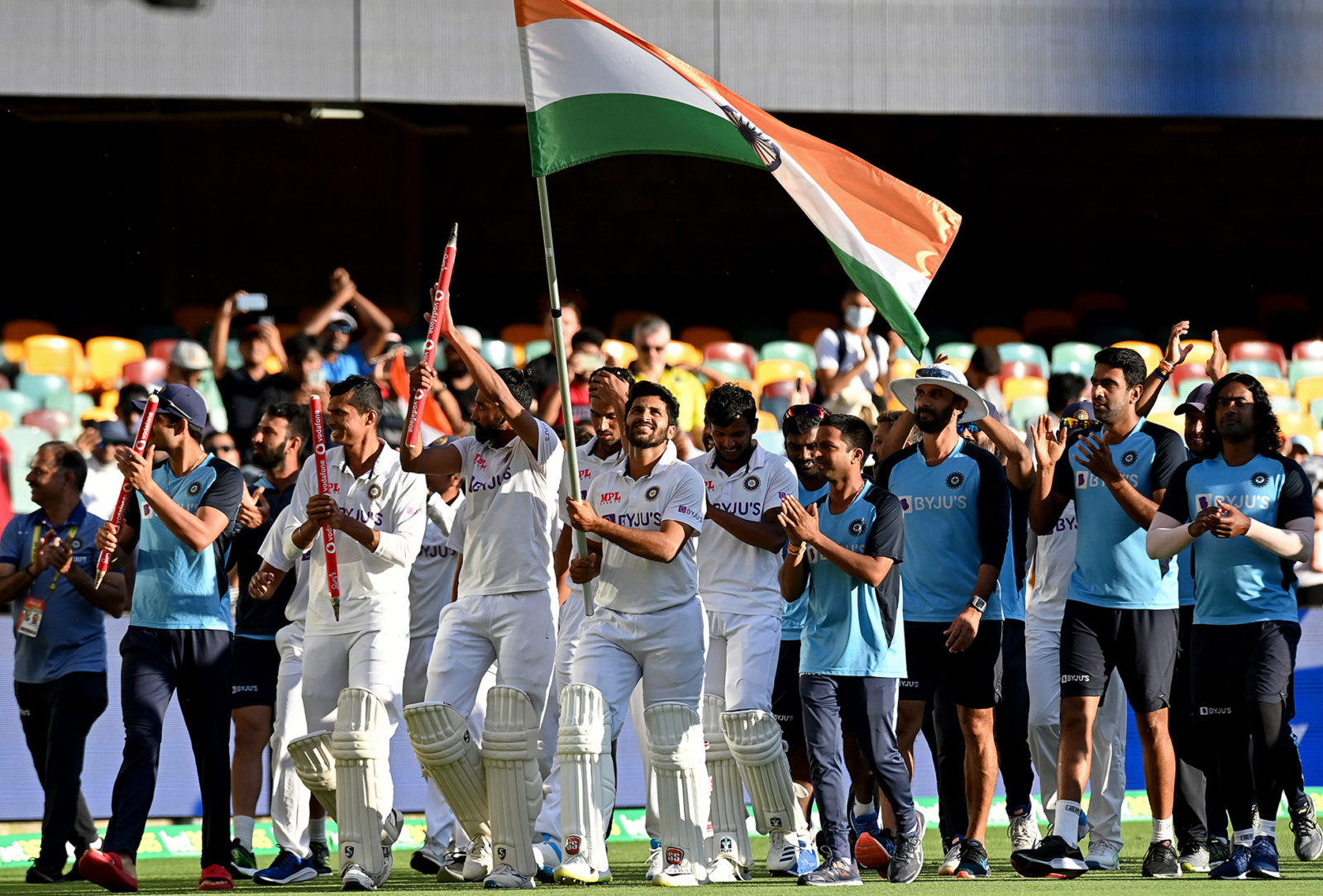 The Indian team celebrates victory after day five of the 4th Test Match in the series between Australia and India at The Gabba on January 19, 2021 in Brisbane, Australia. (Photo: Bradley Kanaris/Getty Images)

Bowled out for 36 in the first Test, without half-a-dozen frontline players, missing their talismanic skipper and leading batsman and competing away from home against a team with a formidable home record, India were supposed to roll over against Australia. But they wrote their own script to win one of the greatest Test series of all-time on Tuesday.

It seems years ago now, but when a Josh Hazlewood-inspired Australia bowling attack ripped India’s batting apart in the third innings of the first Test in Adelaide in December, it appeared the four-Test series was already over.

India were skittled for 36 in their second innings after being well-positioned for a win after holding a 53-run first-innings lead. But Hazlewood’s five for eight in five overs, with Pat Cummins adding four for 21, not only won the day, but to almost everyone outside India’s camp, had inflicted irreparable mental damage on India’s batting unit.

Not so fast. Despite the fact that Australia knocked off the 90 needed to win with eight wickets remaining, there was a sense of calm in the Indian camp.

On Tuesday, after nearly three months down under, they completed one of the most remarkable turnarounds in cricket history to win the fourth Test at the Gabba in Brisbane by three wickets and take a 2-1 series win.

Wicketkeeper Rishabh Pant led the way with a brilliant 89 not out while Cheteshwar Pujara provided heroic support with 56 off 211 balls and 10 severe blows to the arms, head and body. Pujara was the embodiment of India’s fighting spirit from the second Test onwards.

The contest at the Gabba went down to the last hour, of the last day, of the last Test. Australia ultimately lost, but great contests require two actors to elevate them to legendary status. And no doubt, this series will go down as legendary.

“This team has tremendous character and self-belief. Even after being bowled out for 36, the team had the belief that they could come back,” India coach Ravi Shastri said after the match.

“Virat [Kohli] also left the team, but he will always be with us. That’s because this team wasn’t built during this series. This team has been built over the past five or six years. And Virat Kohli’s character has rubbed off on the team. Ajinkya Rahane led in Virat’s absence, and while he’s a cool customer, he’s a real fighter from inside. He handled the troops really well in Virat’s absence.”

Fittingly Pant hit the winning runs at 17:37 (local time), just 23 minutes from the scheduled end of play, as India scored 328 for seven – a record run chase at the Gabba. It also ended Australia’s 31-match unbeaten run at the Gabba.

India only needed a draw to retain the Border-Gavaskar trophy, which they have held since 2017, after winning the second Test in Melbourne and stubbornly forcing a draw in Sydney. But this India team wanted to win to underline they were the better team over four compelling encounters.

In a series that had everything, including sadly, an incident of some of the Sydney crowd hurling racial abuse at fast bowlers Jasprit Bumrah and Mohammed Siraj, fortunately, it was the compelling cricket that will be remembered.

“We were here to win the series, but we have just been outplayed by a disciplined and tough Indian side who fully deserve the series win. We have to look back over a lot of things, and we’ll go through it as a group, and we have been outplayed by a better side this series,” Australia captain Tim Paine said after the match.

If Pujura embodied the physical courage to deny Australia, it was Pant who embodied the mental pluck to take the attack back to Australia’s much-vaunted bowling attack. Fortune favours the brave they say, and India were brave in every sense – physically, mentally and tactically.

“I think this is one of the biggest things in my life right now,” Pant said after his heroics at the Gabba. “I wasn’t playing in the starting matches, but it has been a dream series I can say that. After not playing the first match, I have been practising hard and everything paid off because we won the series.

“The team management always backs me and tells me that you are matchwinner and you always have to go and win the match for the team. That’s the only thing I keep on thinking every day that I want to win matches for India and I am happy that I did it today.

“It was a fifth-day pitch and the ball was turning a bit and I thought I had to be a bit disciplined with my shot selection.”

And it was all held together by the understated, but brilliant stand-in skipper Rahane, who steered his side to a first win in Brisbane and a first-ever back-to-back series win in Australia.

Not only did India fall apart in the first Test, they then had to deal with the loss of captain and leading batsman Virat Kohli, who returned home to be at the birth of his daughter. With 14-day quarantine periods required to come into Australia, it just wasn’t feasible for the skipper to return for the fourth Test.

Spinner Ravindra Jadeja missed the first and the fourth Tests through concussion and a thumb injury. All-rounder Hanuma Vihari, who frustrated Australia’s bowling attack in the drawn third Test in Sydney, missed the Brisbane decider through a hamstring injury.

Pant wasn’t even the first choice wicketkeeper going into the series but took his chance when called into the side, as did all the others who had to step up in hostile conditions.

Seamers Washington Sundar, Shardul Thakur and Navdeep Saini all contributed heavily at the Gabba. Saini took a five-for in the second innings, which Australia dismissed for 294. Shardul weighed-in with four wickets on a pitch that was supposed to favour Australia’s barrage of seamers.

After the lows of Adelaide, India regrouped and immediately, and stunningly, put Australia on the backfoot at the MCG in Melbourne.

The home team won the toss and batted, but were dismissed for 195. Bumrah took four of the wickets as no Australian batsman reached a half century.

In reply, India turned the screw, scoring 326 with Rahane contributing 112 in a classic skipper’s innings that showed Australia the series was far from over.

Australia again struggled with the bat and only managed 200 in their second innings, as no batsman reached a half century again. It left India needing a modest 70 to win, but after what happened in Adelaide, there were some butterflies. With India at 19 for two, Australia had their tails up so soon after dismissing the tourists for 36, but Rahane (27 not out) and opener Shubman Gill (35 not out) saw them home by eight wickets.

The series was level halfway through, and in the context of the Adelaide collapse, it was perhaps the most remarkable comeback by a touring team in Australia.

The third Test in Sydney ended in a draw but it was a moral victory for India, who stubbornly batted through a deteriorating fifth-day pitch to force the stalemate.

Australia posted 338 after winning the toss and batting. Steve Smith finally found some form on his way to 131. India could only respond with 244, giving the Aussies a handy 94-run first innings advantage.

The home side piled on 312 for six before declaring their second innings with Cameron Green (84) and Smith (81) setting the platform. From there Hazlewood, Cummins, Mitchell Starc and Nathan Lyon were supposed to finish off India with more than a day to bowl at them.

But India’s resilience was otherworldly with Ashwin and Vihari surviving for 42.1 overs while adding only 62 runs, it forced a draw and sent the series into the Gabba decider.

And the rest is history. DM