As repression in Egypt increases, so does UK cooperation with its regime 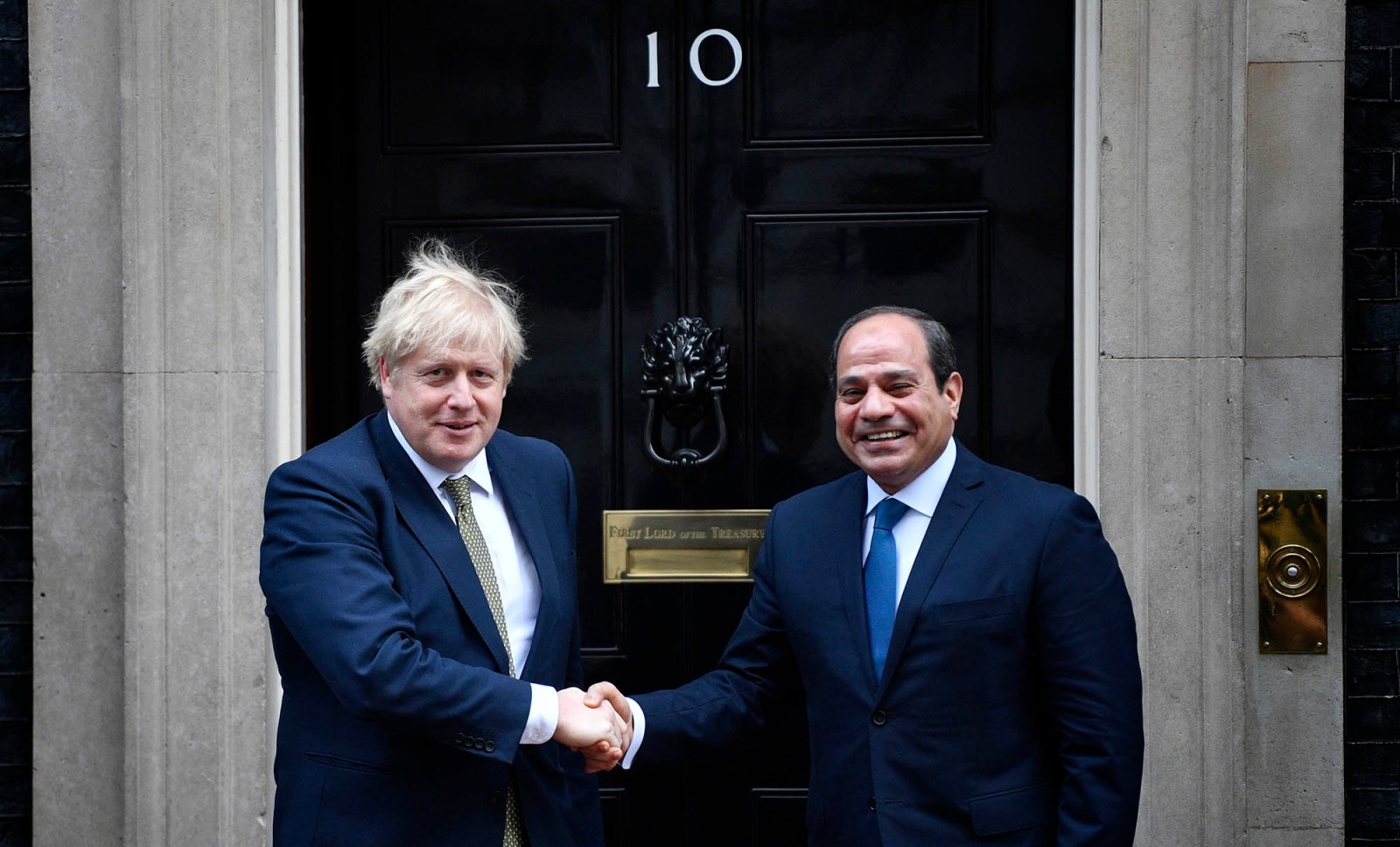 Ten years on from the Arab Spring, the UK government’s relationship with a brutal regime in Egypt goes from strength to strength, as the country witnesses its worst human rights crisis in modern history, under Abdel Fattah al-Sisi.

Nearly 10 years ago, in February 2011, British prime minister David Cameron set out on a tour of the Gulf states, all close UK allies, with a bevy of representatives of the UK defence industry in tow.

Occurring in the middle of the Arab Spring, when repressive regimes were being toppled in popular uprisings, the government feared its lucrative cosiness with Gulf autocrats could send the wrong message and it tacked a last-minute stopover on to the itinerary: Egypt, where veteran ruler Hosni Mubarak, who had been in power for 30 years, had just been overthrown. Cameron briefly descended upon Cairo’s Tahrir Square – the site of protests against Mubarak – for some photo opportunities, and then it was back to business.

It was soon revealed that British-manufactured tear gas had been used by the Egyptian authorities on the protesters in the square. But a decade on, UK arms firms continue to count Egypt as a major client.

The country is now presided over by Abdel Fattah al-Sisi, the former director of military intelligence and defence minister who took power in 2014 after leading the previous year’s coup against Mohamed Morsi, Egypt’s first democratically elected president.

The aftermath of the coup was characterised by massive bloodshed. The August 2013 Rabaa Square massacre, supervised by Sisi, saw the Egyptian police and army kill more than 1,000 overwhelmingly peaceful protesters.

Since Sisi’s assumption to the presidency, Egypt has witnessed its worst human rights crisis in modern history. Arbitrary arrests are rampant, tens of thousands of political prisoners have accumulated in jails under appalling and often lethal conditions, and the United Nations Committee against Torture has arrived at the “inescapable conclusion that torture is a systematic practice in Egypt”.

In addition, there are enforced disappearances and extrajudicial executions by security forces operating with near-total impunity. Military courts regularly try civilians, including children, in mass trials.

In one such trial, documented by Human Rights Watch, a court managed to hand down a life sentence to a three-year-old boy. It was later admitted that the sentence was in fact meant for a 16-year-old student of the same name.

Throughout this time, Sisi has been courted by the UK government and Prime Minister Boris Johnson has met him at least three times. The first presidential visit to the UK took place in November 2015, two years after Rabaa, while Cameron was still prime minister and as British arms sales to Egypt flourished.

In September 2015, the Egyptian army’s chief of staff, Mahmoud Hegazy, had already travelled to London for an arms fair – for which he was granted temporary diplomatic immunity by the British Foreign Office and thereby spared the possibility of being arrested over torture allegations.

In a joint press conference between Cameron and Sisi, the prime minister declared that, “we’re proud to be the largest foreign investor in Egypt”. After referring to the “need for political progress” in the country, he went on to stress the need to “continue our close security cooperation, including on tackling the scourge of violent Islamist extremism”. Deploying counter-terror rhetoric can be a useful way to dispense with the issue of human rights.

For his part, Sisi praised the widening UK-Egyptian “trade and investment partnership”, and said Egypt was seeking a “society that can provide a dignified life and answer the people’s demands of freedom, security, stability and social justice” – the opposite of a state that charges human rights defenders and journalists with terrorism.

Egypt was invited to both the 2017 and 2019 DSEI arms fairs in London. In 2019/20, the country was designated a “key market” by the Defence and Security Exports unit of Britain’s trade ministry, a public body that helps the arms and security industries promote their exports.

Campaign Against the Arms Trade (CAAT) notes that since July 2017 the UK has authorised £26-million worth of export licences for military goods to Egypt. This does not include 18 additional “open” licences, which permit the unlimited export of certain goods with no need to report the quantities or values involved.

Among the no fewer than 201 items listed on CAAT’s website as authorised for traditional export to the country are components for combat aircraft, machine guns, assault rifles, electronic warfare equipment, crowd control ammunition, and tear gas/irritant ammunition.

On only a smattering of occasions has the UK put on a show of principle by revoking a handful of arms export licences to Egypt – or suspending and then swiftly restoring them.

Prominent arms firms with offices in the UK such as Raytheon, Lockheed Martin, Chemring, and Thales have all peddled their wares to the Egyptians – and have all received public money in the form of Scottish Enterprise grants.

The issue is not that every British military export necessarily facilitates Egyptian human rights abuses. It is, rather, that selling the country weaponry serves to endorse the regime and indicates that not so much “political progress” is needed after all.

Query to the Foreign Office

According to a UK-Egypt Joint Statement on Economic Cooperation from January 2020, Britain invests $48-billion in Egypt, in sectors ranging from telecommunications to pharmaceuticals, fast-moving consumer goods, and oil and gas. Oil giant BP is one of the largest investors, and a British Investors Forum with Egypt was launched in early 2020.

Between 2016 and 2020, the UK contributed more than £50-million “to support Egypt’s continued stability and prosperity”, while also guaranteeing a $150-million World Bank loan.

In a 2018 paper for Middle East Monitor, titled “In Egypt the British trade millions of dollars for human rights”, journalist Amelia Smith explains: “Even though [deposed president] Morsi had been telling the Western countries and the multinationals what they wanted to hear, there had been concern in Westminster that their trade agreements may not be safe”.

A brand-new agreement was signed last December to “strengthen political and trade ties” between the UK and Egypt. The press release from the Foreign, Commonwealth and Development Office (FCDO) lauds the country as an “important market for UK exports worth £2.3 billion in 2019”, including metal ores and pharmaceutical products.

It also specifies that the UK is “committed to strengthening its relationship with Egypt and building co-operation on important issues including education, the environment and human rights”.

Quoting these lines, I submitted the following query to the FCDO news desk: “Will any trade – for example of armaments – be contingent upon fulfillment of human rights criteria by Egypt, such as a cessation of the practice of torturing children?”

I included a link to a March 2020 Human Rights Watch report that focuses on 20 of the hundreds of cases of Egyptian children who have been arbitrarily arrested, forcibly disappeared, and tortured by state security officers.

Twelve-year-old Abdullah Boumadian, for instance, was disappeared for six months, tortured with electricity, and waterboarded, “apparently because his older brother had joined the Islamic-State local affiliate”.

In another case, a 14-year-old was tortured, disappeared, and held for three years in pre-trial detention for, inter alia, “spreading a pessimistic atmosphere”. Others were charged with crimes committed while they were already in state custody.

The FCDO’s news desk responded to my query by directing me to the official government position that Egypt is a “human rights priority country for the UK”.

It added: “It’s also worth noting that the Government takes its arms export responsibilities very seriously and operates one of the most robust arms export control regimes in the world. We rigorously examine every application on a case-by-case basis”.

And so the UK-Egyptian partnership goes from strength to sinister strength, with Britain in effect underwriting all manner of oppression. A pessimistic atmosphere indeed. DM

Belén Fernández is the author of Exile: Rejecting America and Finding the World and The Imperial Messenger: Thomas Friedman at Work, and is a contributing editor at Jacobin magazine.