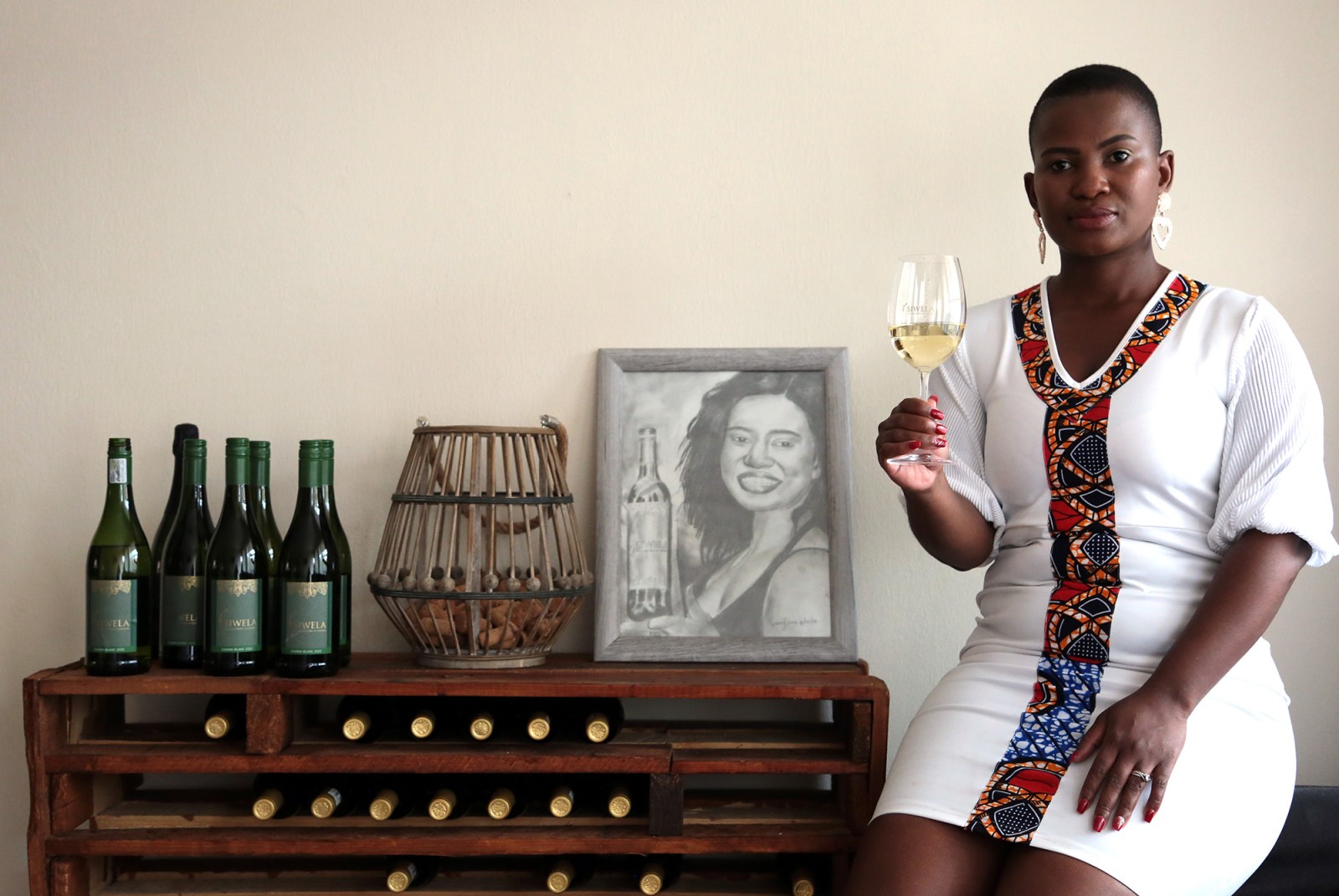 Siwela Sweetness Masoga, a winemaker who is on the verge of losing everything as a result of the booze ban in lockdown Level 3. (Photo: Felix Dlangamandla)

While debate continues to rage around the ban on alcohol sales, small businesses are reeling under this disastrous regulation. One of them is Siwela Wines, run by a young, black woman – a rarity in an industry dominated by white men.

With the South African government having imposed three successive bans on alcohol sales in almost a year, Siwela Wines, an online wine company, might have to close.

“Wine is the only thing I do… this is my business. This is my life. I depend on selling my wines,” said 30-year-old company owner Siwela Sweetness Masoga in a Zoom interview with Daily Maverick.

During the first ban at the start of South Africa’s lockdown in March last year, her business was not as badly affected as she could still take orders online. Alcohol sales were lifted in June, but then banned again in July.

“We recovered slowly after the second one,” she said. That ban was then lifted in August.

But on 29 December, a third ban on the sale of alcohol was announced with immediate effect. President Cyril Ramaphosa said this was done to reduce the number of alcohol-related admissions to hospitals and alleviate the pressure on resources needed to fight Covid-19.

This third ban is the focus of a lawsuit by South African Breweries, which is challenging the constitutionality of the action.

“The third ban comes when we are trying to recover from the losses we suffered last year,” said Masoga. There are five permanent employees at Siwela Wines, together with several casual workers.

Masoga started her business in 2018 after working for five years in the quality department at Distell, one of the biggest alcohol producers in South Africa. Before that, she was an intern at a winery in Stellenbosch after graduating with a degree in biotechnology from the Cape Peninsula University of Technology.

Masoga, who self-funded the business, told Daily Maverick: “It’s still a small business… it’s a start-up business, but I have employees that I need to pay. I’m one of the employees that need to be paid by my company.”

Masoga pointed to other problems associated with the ban: she has to reduce prices on unsold stock that would otherwise have already been sold.

“There’s also the issue of storage… even though we can continue with production, where are we going to store these wines, including the other vintage from last year that we didn’t sell?”

She said the ban was even affecting her on a personal level.

“Wine is the only thing I do… this is my business, this is my life,” she said. The ban is “killing my morale as a person… I’m the one person who has always been very positive about what I’m doing despite the challenges – and there are so many challenges in this industry being a black woman, a young person, even being a start-up business in this economy”.

But it’s her staff she is worried about: “Now you have to tell them that you can’t pay them because you’re not trading… if I don’t sell, I can’t make money.”

Masoga was born in Soweto and raised in a village called Marulaneng-Ga Mphahlele in Limpopo. She moved to Cape Town after matriculating.

“My moving to Cape Town opened a lot of opportunities for me, especially in the wine industry.”

She said if she had not made this move, she probably would not have become a winemaker. During her studies, she focused on microbiology and fermentation, where she developed a passion for wine. Aside from Siwela Wines, Masoga runs a wine club and a wine academy.

Returning to the ban, Masoga said she was in favour of limitations on the sale of alcohol. She believes the best option would be to allow online sales, but that even this would impact shebeens as owners are usually dependent on sales from people who generally do not buy items online.

Masoga suggested the problem might not be alcohol itself, but rather how and why consumers drink alcohol.

“The way we have a relationship with alcohol, something needs to be done,” she said.

Masoga said there should be tougher laws for drunk driving and alcohol-fuelled gender-based violence. “Those laws need to be really strict in order for people to begin to be responsible whenever they consume alcohol.”

Before the latest ban, Masoga had plans to open an urban winery in Kempton Park, Johannesburg. Just before the end of the year, she posted an ad for new staff.

WE ARE HIRING: We are adding to our growing home. If you share our passion for wine, excellence in customer service and sales driven, we want you to join us. Candidates are expected to work remotely. We offer 10 % commission on sales generated.
Email [email protected] pic.twitter.com/HAfsaf4htJ

After the third ban was announced, Masoga said her plans to hire new people needed to be put on hold. Business targets and forecasts would also now be adjusted, she said.

“It’s very frustrating because the government is always going on about people being entrepreneurs and creating job opportunities, and when we try to do that, they are the ones who are making it harder.”

When asked about government support for her business, Masoga said: “No, nothing… the only thing I’ve got from the government is the ban.”

She applied for small business assistance but there was no response.

“It sort of makes you wonder… did I really make the right choice?” she said of her venture into entrepreneurship.

When asked about the 11 January announcement of the extension of the alcohol sales ban, Masoga said due to the impact of alcohol abuse on people’s lives, the ban was necessary at this point.

“We need to consider that this isn’t business as usual… lives are in danger and we therefore cannot only focus on making a profit,” she said.

Masoga said the industry will recover but now it needs to work with government to save lives. The focus, she said, should be on ensuring responsible and moderate alcohol consumption.

“My plan for 2021 is to focus on the urban winery… I mean this is like a dream come true for me. I’m very excited,” she said. And the wine academy is still on the cards.

Masoga said she wanted to tour underprivileged schools to talk to young girls about business ventures.

“When I think of myself when I was still in high school, if  I had had people like me now who had spoken to us about different career opportunities, I would probably have made better decisions regarding my career,” she said. DM