Uganda’s social media battleground is not just an Afr... 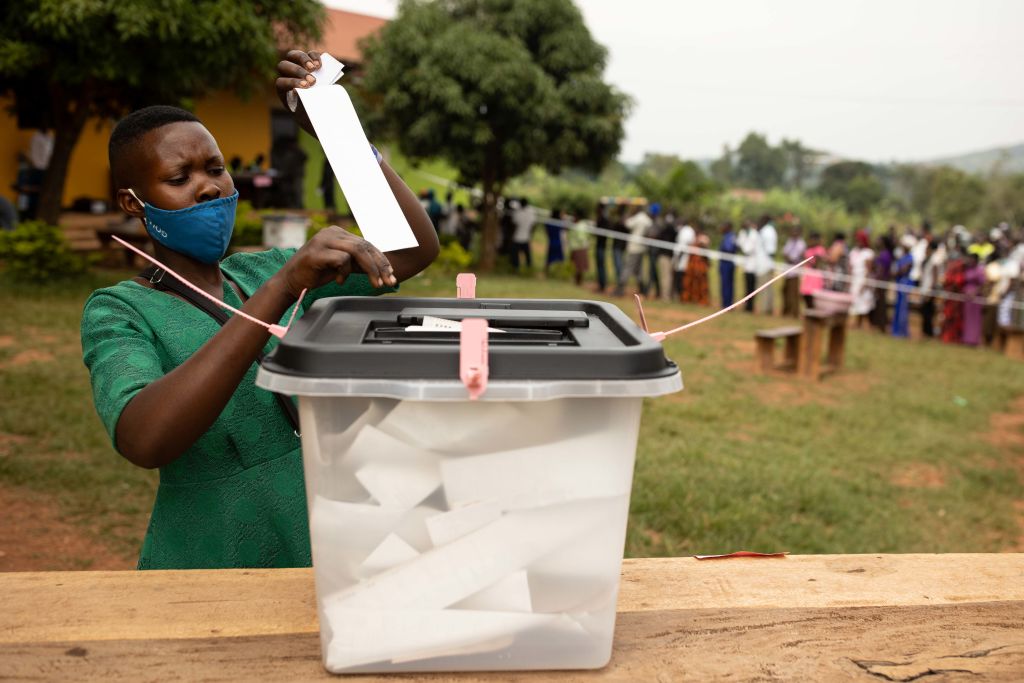 People vote at a polling station on January 14, 2021 in Kampala, Uganda.(Photo by Luke Dray/Getty Images)

Elections are a reminder that free speech must be weighed up against information warfare when considering restrictions.

In the earlier days of Ugandan Yoweri Museveni’s presidential career in 2006, I remember seeing election posters routinely torn down by all sides during campaign rallies in an attempt to control the message. Now social media has become the new election battleground, propelled by the rapid proliferation and reach of cellphone technology across Africa.

60% cent of Uganda’s population has access to a cellphone. Although social media penetration is still relatively low, it’s growing rapidly, with a 27% increase between April 2019 and January 2020.

As the potency of so-called information operations is recognised, it isn’t surprising that the tools used to democratise access to information (including fake news) are being reined in. States have ordered shutdowns apparently to protect the status quo. Likewise, platform controllers have found themselves under pressure to step in, in response to their own rules being violated.

It’s a complex balancing act – a tussle between rights and responsibilities. Facebook and Twitter have been dragged away from the relative comfort of obscurity and arguments about network neutrality and forced to take a stand. Uganda’s recent election is the latest iteration of that.

On 12 January, responding to reports that internet service providers “are being asked to block social media and messaging apps” on the eve of Uganda’s election, Twitter’s Global Public Policy Team posted: “Earlier this week, in close coordination with our peers, we suspended a number of accounts targeting the election in Uganda. If we can attribute any of this activity to state-backed actors, we will disclose to our archive of information operations.”

Media reports suggested earlier that Ugandan authorities were retaliating against big tech’s allegations that they may be using underhand means to win votes. Facebook also found itself in the firing line after it took down a network of Ugandan government-linked sites it claimed had been involved in fake news.

At least 15 African countries have restricted or switched off social media access during protests or elections in the past five years. Chad, Ethiopia and Tanzania are among them. Furthermore, evidence has emerged that African governments are quietly tightening up their legal frameworks to restrict social media use.

For savvy operators, social media platforms enable them to project a voice way beyond the confines of any hustings or campaign rally. Recent Institute for Security Studies research reveals how the amplification effect of social media makes it a uniquely powerful tool for both good and ill.

80% of Uganda’s population is under 30. The demographics of social media usage are biased towards the young and so the potential ‘threat’ that platforms such as Facebook and WhatsApp pose to the status quo is clear. Particularly as the old guard of Ugandan politics is being challenged by 38-year-old opposition frontrunner Bobi Wine. His prolific use of social media campaigning led Uganda’s government to dub him an “agent of foreign interests.”

Although many African countries are reviewing their laws to control social media use, researchers found that “a third of the world’s countries have been blocking or restricting access to social media since 2015” – so it isn’t a strictly African trend.

Lesotho, Tanzania, Uganda and Kenya are among those blazing the trail in social media restrictions. Kenya, which has one of the continent’s most energetic social media communities, is considering the Kenya Information and Communications (Amendment) Bill, 2019. Under the proposed legislation, bloggers must potentially apply for a licence to operate on social media.

Social media platform controllers may be required to hand over material to governments, and administrators of groups such as WhatsApp will need to regulate members’ behaviour online. Big social media companies such as Twitter and Facebook will also be obliged to open offices in territories where their content can be consumed – presumably to ensure they’re compliant with local laws.

The reflex by governments to introduce tougher laws to control social media will be considered by human rights protagonists as an assault on free speech. But the debate is no longer simply about personal freedom of expression. Issues of outside manipulation also come into play, although these can be exaggerated for political gain.

Policymakers must assess the risks and benefits of social media from several perspectives. They need to resist regulating or closing down platforms without considering what the motivation is to limit a free for all. Is it to protect an incumbent from opposition voices or to fortify a state against foreign intrusion?

As a policy prescription, greater digital literacy among the wider public may be more impactful than internet shutdowns. In any event, the prevalence of virtual private networks enables users to ‘cheat’ their location, rendering domestic shutdowns ineffective.

More awareness among the mainstream media about the dangers of inadvertently amplifying fake news by retweeting popular hashtags without verifying them may also encourage responsible social media use. Civil society and professional media have a role in ensuring accuracy is cherished, and authenticity of content is given primacy over speed of delivery.

Companies such as Facebook who can no longer sit on the virtual fence should be incentivised to engage more closely with policymakers, without risking accusations of political bias. They must also defend their platforms as tools for promoting free speech while being aware of the power of new technology to become a weapon of information warfare.

Election monitoring must increasingly take on a digital dimension. The United Nations Development Programme and the Electoral Commission of South Africa (IEC) have hosted events to promote awareness among election monitors about the potency of social media.

A key theme to emerge is the need for election monitoring bodies to begin the online observation process early on in the election cycle, as narratives get shaped. They must also be acutely aware of the importance of local context in assessing the impact and meaning of messages and the timing of shutdowns during critical times such as elections. DM