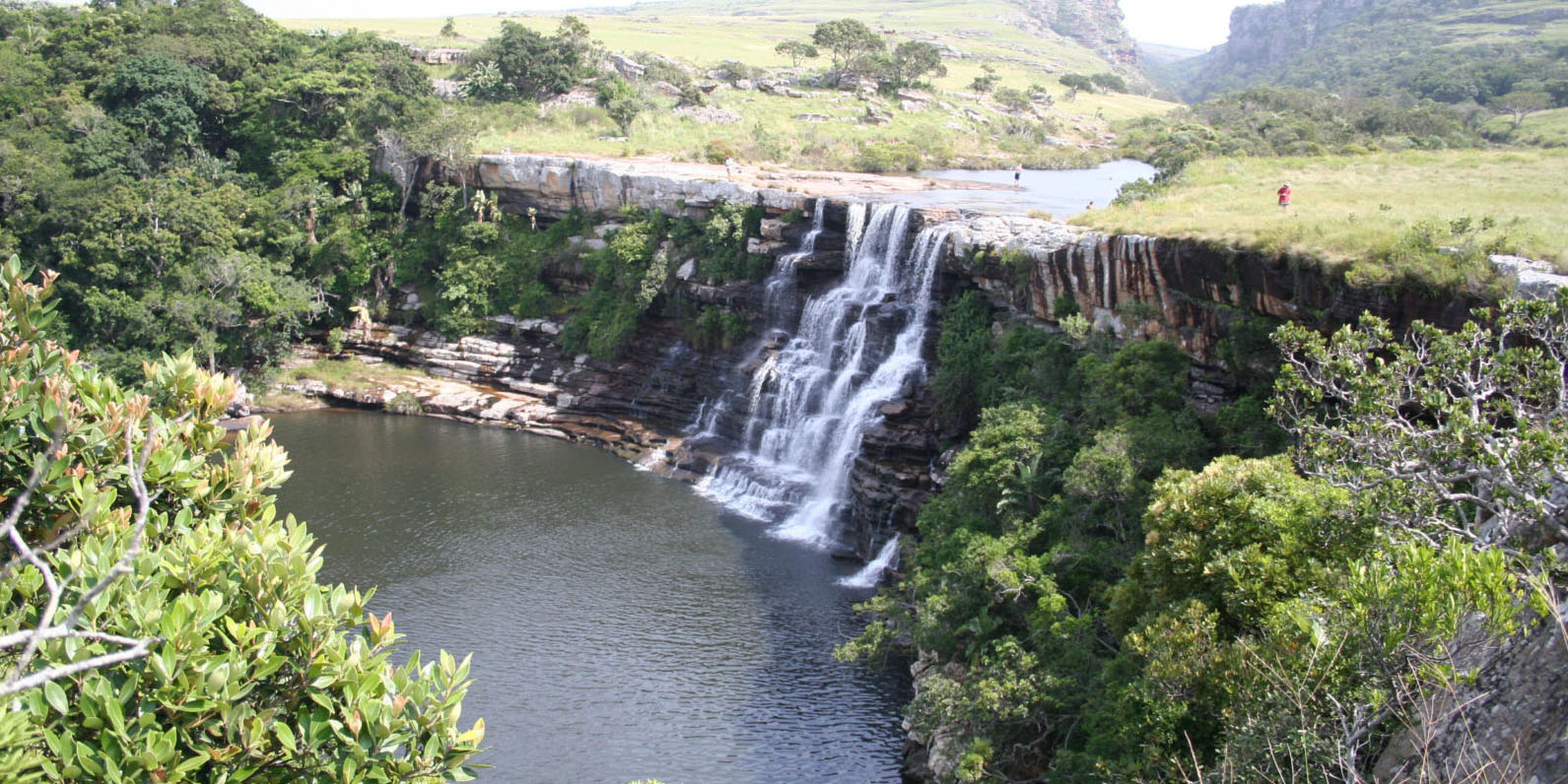 Horseshoe Falls is one of more than 20 scenic waterfalls in Mkambathi Nature Reserve. (Photo: Supplied)

Contrary to claims in a 2019 Daily Maverick article, Mkambathi on the Eastern Cape Wild Coast is neither being sold nor privatised. Quite the contrary: what is being negotiated is a lease of huge financial value to both the community and the government, with the private investor taking all the risks – and conservation being the winner.

The 9 April 2019 Daily Maverick article by Tony Carnie, “Privatising paradise – questions emerge over exclusive Wild Coast lodges”, with the strap headline “Selling the Wild Coast”, conveys a seriously distorted and inaccurate picture of the circumstances surrounding the development of the Wild Coast by the Mkambathi community.

At issue is the Community/Public/Private Partnership (CPPP) being developed on the Eastern Cape’s Wild Coast by the Mkambathi community in conjunction with Eastern Cape Parks and Tourism Authority (ECPTA) and a private company, Mkambati Matters.

The backstory involves the creation of a leper colony in the 1920s that resulted in wholesale forced removals. The land, over time, morphed into a provincial park and finally a successful land claim by an extremely poor subsistence farming community of about 40,000 people.

The area is a beautiful, internationally designated biodiversity hotspot with rolling hills, waterfalls and pristine beaches that had been home to the community for centuries. The area to the north of Mkambathi is being eyed by an Australian mining company that, despite their assurances, would wreck it.

Through a successful land claim in 2002, the community was awarded full ownership and title of Mkambathi Nature Reserve along with a further 12,000ha of adjacent rolling grasslands.

Part of the land claim encompassed the stone cottages within Mkambathi that once housed doctors and nurses from the old hospital. These have been let to holidaymakers who have been returning for many years, to the point where some appear to be assuming virtual ownership and are very wary of any development that might disturb “their” piece of paradise.

Some of these people initiated this story in an attempt to create controversy.

The reserve’s area under discussion encompasses 7,000ha, with the community pledging to increase the size of the reserve by donating an additional 2,000ha to 3,000ha of their land for conservation in perpetuity when the new lodge opens.

What the article calls “Selling the Wild Coast” is, of course, not an area for sale. It is a portion of the larger area on a lease where a high-end lodge is being built as a revenue and job source for the community. It is being developed in conjunction with ECPTA, the local community and Mkambati Matters.

The community is donating more of their land into the interior to conservation to help make Mkambathi ultimately more sustainable.  Surely this is what should be written about and celebrated?

The discussions have been going on for many years and involve careful planning and fully comprehensive EIAs. These negotiations have been facilitated and guided by an independent NGO, the Vumelana Advisory Fund, which specialises in negotiating win-win community-private partnership solutions to land reform challenges.

The headline is misleading. Nothing is being sold and nothing is being privatised (other than the land claim that ceded ownership of the land from government to the community). Quite the contrary: what is being negotiated is a lease of huge financial value to both the community and the government, with the private investor taking all the risks – and conservation being the winner.

The principles of this type of leasing partnership are well tested and accepted successfully in South Africa and many parts of Africa.

With government budgets being stretched, SANParks, Kruger National Park, CapeNature and many others have had to fund a large portion of their annual costs through similar lease and concessioning arrangements.

Mkambathi goes one step further through community involvement and ownership in time and at scale that will result in Mkambathi becoming one of the better, true partnerships in a wilderness area between a community, government and a private investor and could well set the benchmark of all such future community partnerships in the country.

It will also most likely become the gold standard for future CPPP partnerships.

Its lodge will also be one of the greenest ever to be developed in South Africa. Every single “ounce” of electricity, for instance, will be created by solar and wind.

At present, income to the community from Mkambathi Reserve comes in the form of minimal rent from the self-catering cottages and the hiring of a few people as cleaners. That’s as good as it has ever been for nearly 50 years.

The result is that there has been precious little investment in any of the cottages or park infrastructure and conservation projects for many years.

When the new lodge is established, over and above the base annual rent of over nearly R250,000 a year (and growing), the community will receive an additional 9% of gross turnover. This is a vital component that the article failed to mention in spite of the author knowing about this – and knowing that the formal reply the writer requested to his questions was arriving the day after the article was published (ED: See Tony Carnie’s response in the footnote).

Nine percent may not sound like much, but it is 9% of turnover – not profits – and will result in many millions of rands being paid annually to the community.

Nine percent is on the high side of most concession agreements in Africa. When this 9% is added to the 15% VAT, it means that government, conservation and community structures will earn 24% of gross turnover of all revenues. In a very good year, it translates to around 50% of net profits of the lodge, without communities or government having to invest a cent.

The community that now owns this reserve has opted for a development model that delivers them the highest possible returns in terms of jobs, cash and enterprise development to the broader community, but with the lowest environmental impacts.

Mkambathi currently employs only a handful of local people in what are basic and poorly paid jobs which offer little if any prospects of career development. This has been the case for over 40 years.

Self-drive, self-catering tourists are not high revenue earners for landowners, nor are they high job creators for neighbouring communities, and many of the tourists and hikers who currently visit Mkambathi do not pay park fees. Nor do they procure much in the way of local produce, crafts or guiding and related services. And the services they rely on during their stay amount to little more than domestic cleaning.

The new Mkambathi model will change that.

The initial employment will be around 50 people and the final employment figure when the reserve and its SMMEs are fully developed, could well be as high as 300 to 400, maybe more.

As important, the nature of the skills required will be of a much higher order (facility management, catering, waitering, guiding, logistics, etc), necessitating significant investment in formal hospitality training and, therefore, much higher salaries and wages.

It is expected that there will be objections from certain small interest groups who have, for years, had unlimited access to the reserve at either no or very little cost, and with little or zero contribution to the local community or to the management of the park or its conservation – and sometimes without paying park entrance fees.

The simple reality facing Africa’s parks and reserves today, Mkambathi included, is that unless wildlife and wilderness areas contribute meaningfully to local communities in cash and kind, the future of these great wildernesses is not guaranteed.

Mkambathi’s historic visitors have to wake up to the fact that this is no longer state land and that the neighbouring local community are the owners and are justifiably seeking a reasonable return for a portion of their asset that must provide the maximum amount of jobs, revenues, skills and enterprise opportunities for their people.

At issue is whether the rights of a small group of hardy holidaymakers are more important than those of 40,000 neighbours who now own that land and want to preserve it while leveraging it for their socioeconomic benefit, while adding considerably to the conservation realm.

The reality is that the new tourism facilities at Mkambathi in the north will encourage and facilitate many more South Africans to visit and enjoy this magnificent reserve that up to now has only been able to host a small number of more robust travellers and hikers who will still be able to visit Mkambathi by booking into the self-catering cottages in the south. DM

Conservationist Colin Bell is the managing director of Mkambati Matters and of Africa’s Finest. The Mkambathi Land Trust was established in June 2004, and is a representative body of seven claimant communities that were dispossessed of their land in northeastern Pondoland in the Eastern Cape as from 1920.