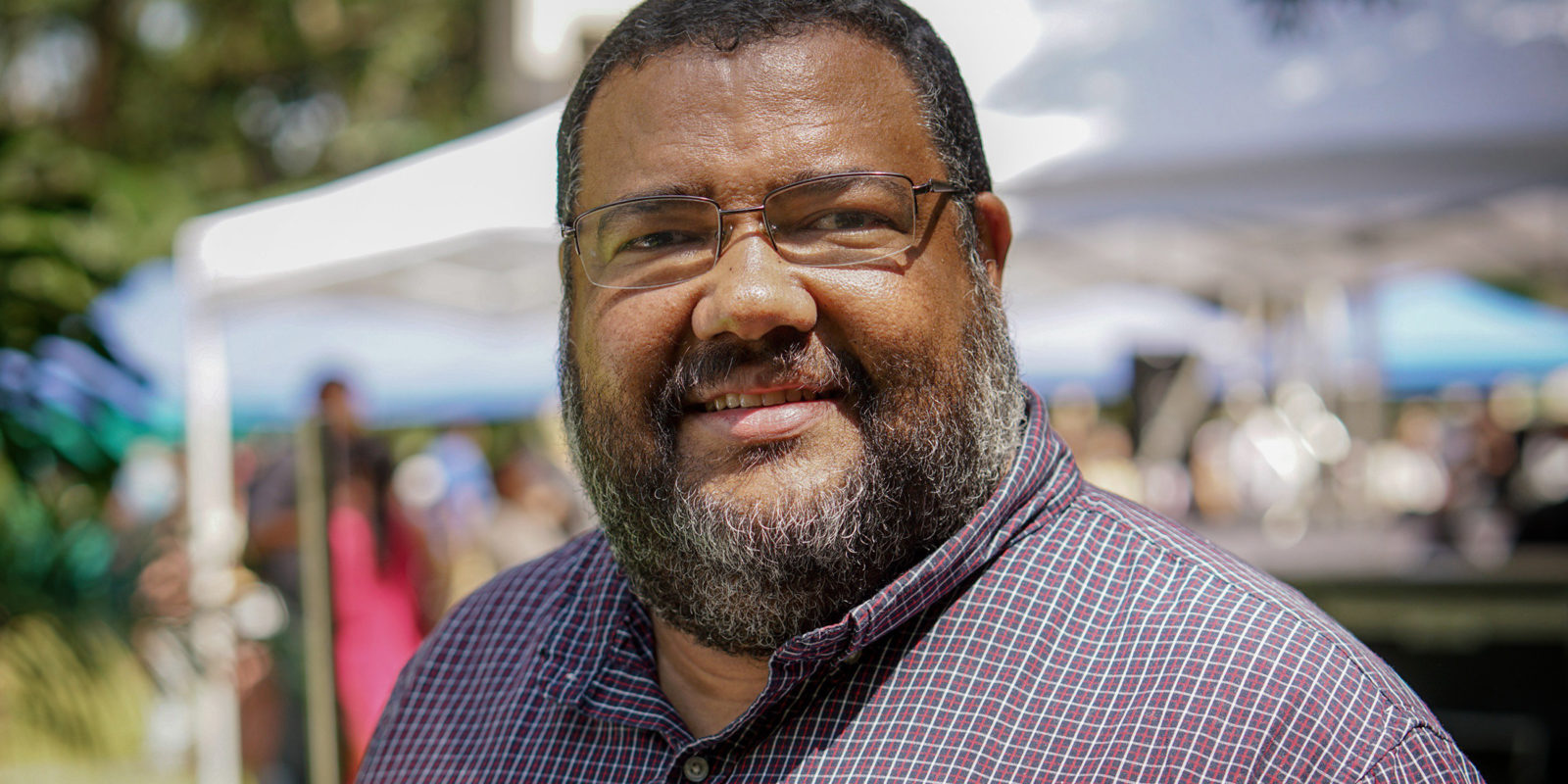 It’s been a long and lonely road for Athol Williams, who is due to testify about global management consulting company Bain & Company’s role in State Capture at the Zondo Commission in February. Having survived the classic punitive marginalisation inflicted on whistleblowers, Williams, who studied ethics at some of the best institutions in the world, can offer insights that will add an edge to evidence presented to date.

Due to testify at the State Capture commission in February, Athol Williams argues that there is almost an “ethical apartheid” between government and business, and that society has given permission for the corporate world to behave differently.

“For the last 10 years I have been actively working towards a more ethical society,” Williams told Daily Maverick.

Describing a talk he gave to 5,000 chief financial officers in Sandton, he said being ethical means more than not doing bad things; it also means seeing bad things happening and doing something about it.”

“Most CFOs in our country fall into that bracket. They are the ones signing off on irregular payments, tenders and contracts.”

Williams has enjoyed the benefits of earning a high salary, but after a period of reflection, he made a conscious decision to change his lifestyle.

“I am not a priest; I am a moral philosopher… but I have tried to go about living my life consciously as an ethical person in society. It is self-reflection that led me to sell the big house I owned and the cars I had and take that money and invest it in a literacy NGO, Read to Rise, which is still operating eight years later.

“I didn’t want to be the sort of person who just talked about things without putting them into practice,” he says.

While conceding that there are limits to what the Zondo Commission can achieve, David Lewis, the executive director of Corruption Watch, says “there have been some glaring omissions and they have been to do with the private sector rather than the public sector”.

In December 2020, consulting firm McKinsey & Company paid back R650-million in fees earned at Transnet and SAA.

“The Zondo Commission treated them as a kind of Mother Teresa of the corporate world,” Lewis said. “It was wholly inappropriate for them to come to that conclusion. It is not their task, quite frankly, especially in that kind of preliminary way. It is absolutely not right.”

Paying back fees earned is not reparation, Lewis asserts.

“McKinsey entered into thoroughly corrupt contracts with Transnet, SAA and Eskom – and Bain with SARS and SAA. They should be subject to criminal investigation.”

The seemingly endless unravelling of State Capture points to a crafty replay of history in the form of colonial invasion by international corporates headquartered in foreign countries intent on capturing government tendering processes.

State-owned enterprises are lacking in capacity, so management consultants such as Bain and McKinsey are given virtually a free hand, Williams says. In South Africa, Bain’s senior staff are almost exclusively foreign nationals.

“They carry their passports in their pockets and everything is rented – their cars, their homes – so they can leave in a day. If the shit hits the fan, all the senior guys are gone tomorrow, literally. This is the attitude with which these foreign companies are coming here.”

Williams worked for Bain sporadically from 1995 to 2019 and was made a senior partner in the firm. He oversaw the company’s investigation when the SARS crisis blew up in 2018, and in mid-2019 Williams was contracted to develop and implement a remedy plan.

He became increasingly convinced that Bain was withholding more information than he originally suspected, and after raising his concerns with the leadership – all the way up to the global executive team – he insisted that before any public declarations were made, he should be shown the missing information.

When his request was denied, he left the job and informed the Zondo Commission that he believed Bain had been in multiple meetings with former president Jacob Zuma as well as several key Cabinet ministers and senior business people, and was part of the architecture of State Capture.

“I was shocked to the core,” says Williams, who still wakes up at night remembering conversations he took part in.

“The first big impact for me was this shattering sense of having been deceived all this time and thinking that these guys were my friends and that I was helping them.”

The Zondo Commission doesn’t offer legal support to whistleblowers and the Protected Disclosures Act does not protect or empower the disclosers themselves.

Williams followed the classic whistleblower trajectory of trying to find pro bono legal support. Firms such as Webber Wentzel could not assist because they were conflicted (Bain is a Webber Wentzel client). Smaller law firms lacked the necessary expertise.

With encouragement from local NGOs, other whistleblowers and the Platform to Protect Whistleblowers in Africa (PPLAAF), Williams compiled his own affidavit.

The Zondo Commission has so far focused on over-inflated contracts, corrupt tender processes and the irregular appointment of people to boards. What is missing, according to Williams, is a picture of the “web effect”, where a handful of people and organisations were part of discussions to repurpose public institutions.

“Under Zuma, they were going to centralise all government procurement,” he says. “Clearly this was about taking over our state.”

“To pay back your fee simply because you were caught with your bloody hands in the till is, frankly, not restitution.”
— David Lewis, executive director of Corruption Watch

Williams is confident of the facts in his submission.

“Every word I wrote in my affidavit is based on a document I have. So, I would say, for example: A met B; here is the email that shows A met B. So if somebody was going to cross-examine me, they can’t question me about whether A met B.”

But there is no knowing for sure what angle the lawyers representing Bain and others such as Tom Moyane and Telkom CEO, Sipho Maseko, will take. Like most whistleblowers, Williams is representing himself.

“I have to expose myself to massive legal risk by producing an affidavit without legal input,“ he says.

Williams suspects that Bain is set on undermining his credibility and obstructing the disclosure of certain evidence. Bain has applied to the Zondo Commission to prevent Williams from sharing sections of his testimony. The commission has yet to rule on this.

“Bain has really got chutzpah to try to exclude evidence from the Zondo Commission. It’s ridiculous. I can hardly believe it,” says David Lewis.

The time required to trawl through hundreds of emails and documents to prepare his affidavit affected Williams’ ability to fulfil his responsibilities as a senior lecturer at Allan Gray Centre for Values-Based Leadership in the Graduate School of Business at the University of Cape Town.

He approached his superiors at UCT in January 2020 and asked to be relieved of some of his duties. The university offered him the option of taking a year of unpaid leave, which he reluctantly accepted.

By August 2020, GSB notified him that it had become increasingly difficult to fill the gap left by his absence and suggested he resign. He complied.

“My health costs are going up because of all the stress and anxiety… I had to have a molar reconstructed because it cracked from clenching my teeth, and my employer says: you are on your own. It’s a textbook experience for all whistleblowers… everyone ignores you, everyone throws you out, you feel abandoned.”

When he approached friends – including CEOs of the top 20 listed companies – for statements of support, they turned their backs, saying that boards and shareholders would never agree to such a request.

He asked for support for a small research organisation he launched – the Institute of Social and Corporate Ethics – and was met with equal resistance from business leaders claiming they couldn’t fund something that would hang out the dirty laundry of corporations in public.

In mid-January 2020, an open letter was issued by the office of the vice-chancellor at UCT announcing that the university had recruited the services of McKinsey for four weeks.

Williams objected to the appointment, which he felt undermined the ethical position he had taken against corporate corruption. He was informed that the university was cognisant of the involvement of certain McKinsey executives in corrupt activities, but that the company had taken remedial steps to make amends for its behaviour. No details were given.

Corruption Watch’s David Lewis points out that there are no transparent and objective criteria against which the morality and rehabilitation of corporates involved in corrupt activities can be measured. This, he says, is a problem.

Corporates implicated in wrongdoing recruit their own consultants to conduct investigations and then selectively share the findings. Williams argues that it should be imperative for an independent body to oversee investigations and share its reports with the public.

McKinsey told the Zondo Commission it had been through the report and found nothing problematic in it. Bain did the same thing, Williams says.

“We are in a situation now where these investigations have already been conducted, but the companies are holding on to the findings.  Zondo, the NPA or Corruption Watch should be handed the full report and then it can be decided whether they did anything unethical or criminal.”

Lewis contends that neither McKinsey nor Bain have come clean.

“They are involved in such dodgy activity across the world that I think there are grounds to remove their licence to operate, certainly in this country. That would be the appropriate level of reparation.

“To pay back your fee simply because you were caught with your bloody hands in the till is, frankly, not restitution.”

In the lead-up to the Zondo Commission hearing, Williams has launched a campaign calling for full disclosure from Bain.

In 2018, Bain issued a media statement saying they wanted to be open and transparent about the investigation as they believe this is what South Africans deserve.

“I am simply asking them to do what they promised,” Williams says. DM

By Nafeez Ahmed and Rebecca Davis

A ray of regulatory sunshine: Gold Fields finally gets approval for solar project

What does cancelling S12J tell us about government?