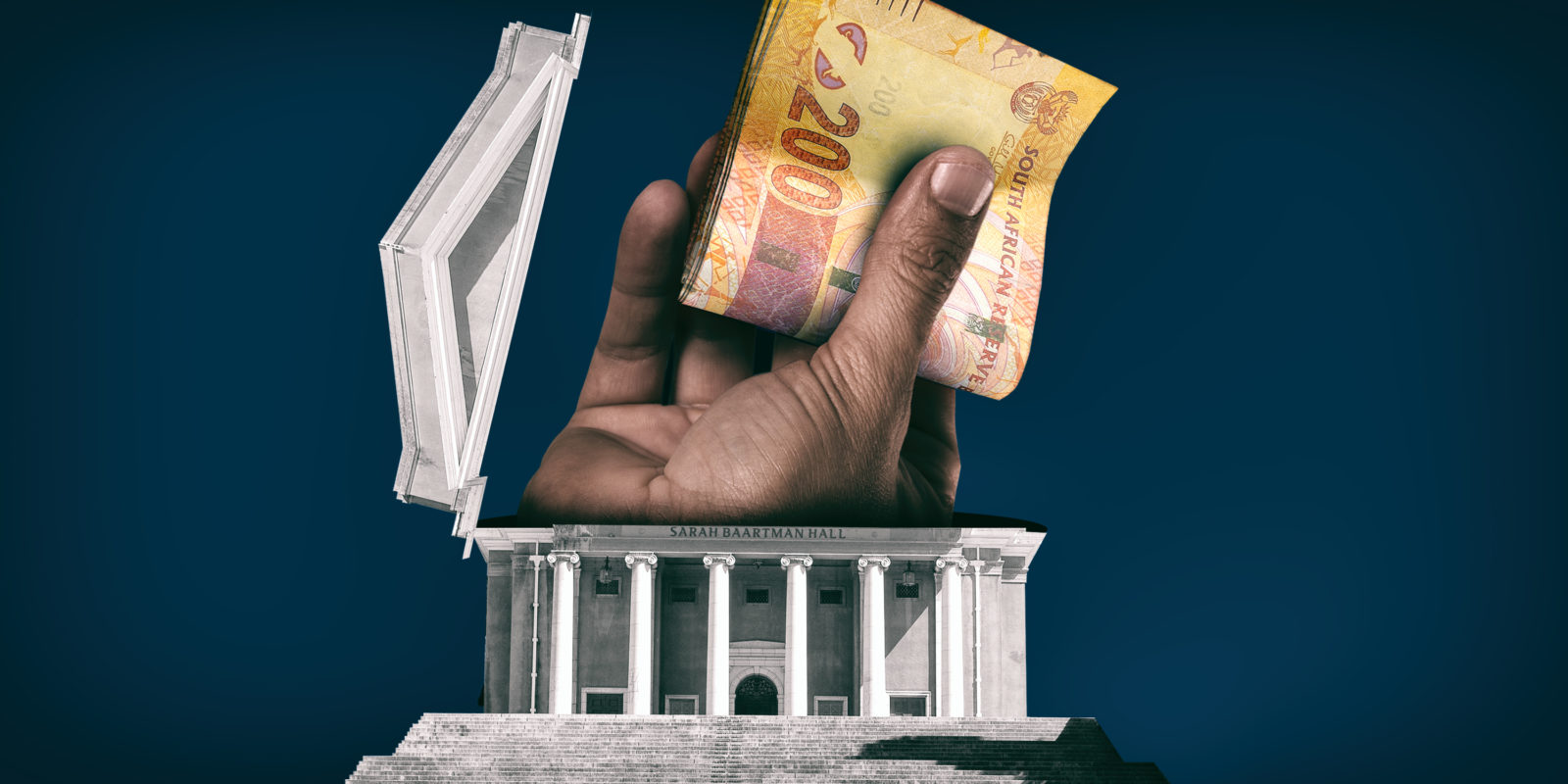 With few options for funding, students in the missing middle bear the brunt of rising fees. These students typically have an annual household income of between R350,000 and R600,000. An estimated 350,000 students fall into this category and funding options are scarce.

The “missing middle”. It’s a term that’s been thrown around since the #FeesMustFall revolution back in 2015 and refers to university students who are too “rich” to qualify for government subsidies, yet too poor to afford university fees.

According to Universities South Africa Office (USAf) CEO Professor Ahmed Bawa, a major problem in the higher education sector is the lack of a “national system” to address student funding for the missing middle. And with few safety nets in place, university fee hikes for 2021 could spell disaster for this vulnerable group.

Most universities have agreed to the minister’s proposals and hiked their tuition fees by nearly 5%. Stellenbosch bucked the trend, however, and raised fees by close to 3.7% for undergraduate and postgraduate students — both local and international. On average, first-year university fees cost about R65,000 and universities are already requesting initial payments for tuition fees as institutions prepare to start the academic year in March. 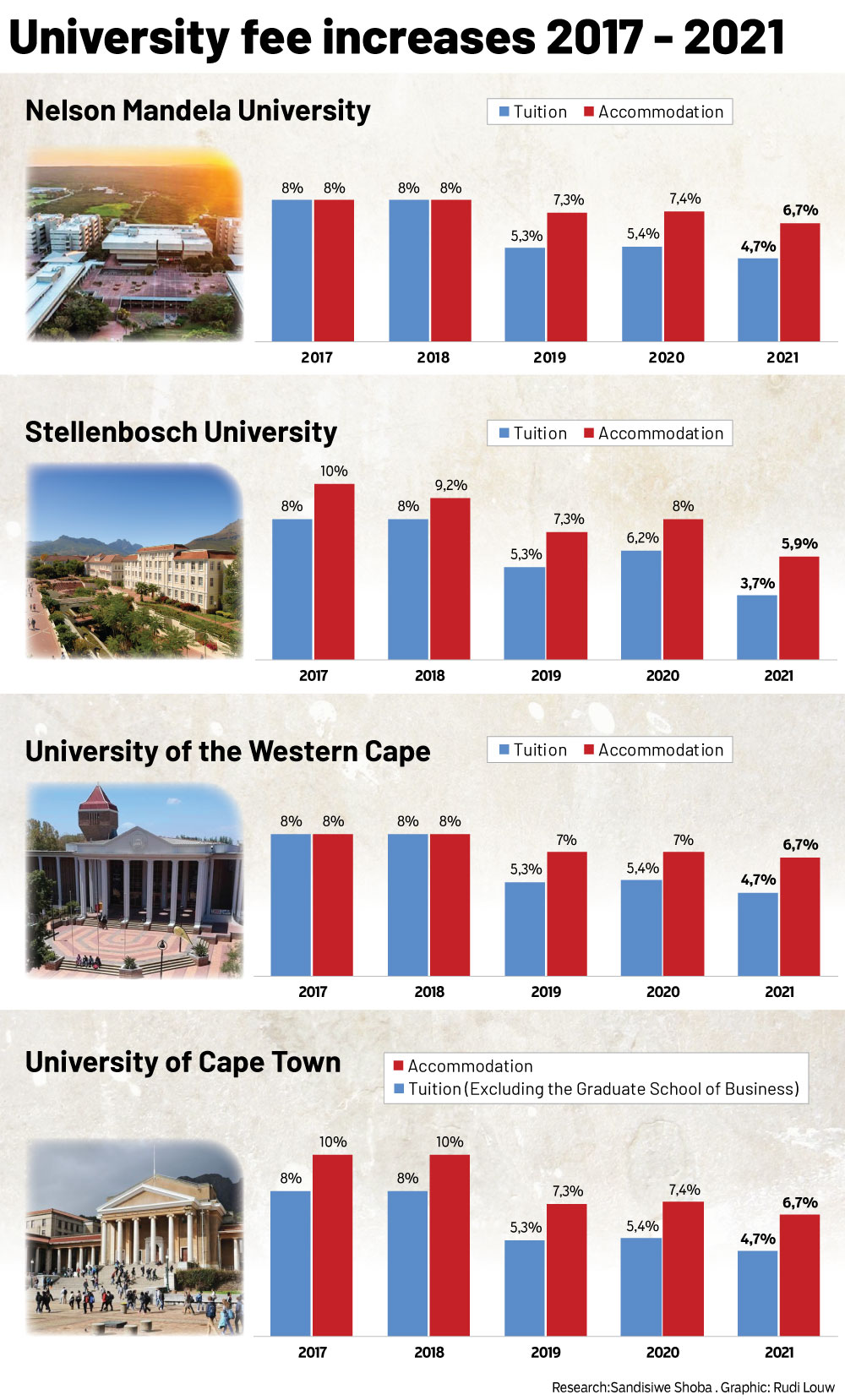 A recent study by Feenix, an online student crowdfunding organisation, found that 88% of 261 students surveyed did not qualify for funding from the National Student Financial Aid Scheme (NSFAS) for reasons such as pursuing postgraduate studies, exceeding the years of funding allowed and studying a degree type which does not qualify for NSFAS aid.

Data from Feenix also showed that 56% of the students surveyed did not receive scholarships or bursaries while 40% did not qualify for a loan.

An estimated 350,000 students fall into the missing middle and funding options are few compared to the need. But options exist besides scholarships and bank loans, which include government aid from the Ikusasa Student Financial Aid Programme (ISFAP), a bursary scheme targeted at the missing middle pursuing in-demand occupations. Local students with a maximum yearly household income of R600,000 qualify. The website says 2,112 students have been funded to date, and 143 graduates.

Crowdfunding is another option. Feenix CEO Leana de Beer says it’s usually a last resort for most students who have exhausted all avenues. It is also debt-free.

“Crowdfunding is a really effective way of bridging communities. Because it’s online, you are able to reach bigger communities, and bring people together. It allows students to reach communities they would never be able to, but it also allows everyday South Africans, individuals and corporates to find students more easily to fund and support,” she said.

Beyond affecting a student’s ability to pay tuition, expensive fees can limit the budget for basic needs while financial pressure can cause mental health problems.

During lockdown, 30% of students surveyed struggled to access food while only 6% had access to all the resources needed to engage in remote learning.

“Covid showed that there’s not only a financial gap; for many students, there’s the digital divide and many, many students can’t afford to study online and can’t access online studies. And we do know of many universities that scrambled and tried really hard to provide their students with data and computers, which is great. But not everyone has the resources to do that,” she said.

The Department of Higher Education, Science and Innovation (DHET) has plans to regulate university fees. “The purpose of a fee regulatory framework for the public higher education system will be to ensure that fees are kept at affordable levels, while ensuring the sustainability of the higher education system,” departmental spokesperson Ishmael Mnisi told Daily Maverick.

Bawa said: “The Higher Education Act requires the councils of universities to manage the financial condition of the universities and this includes the setting of the fees.”

Stellenbosch University, however, says it’s opposed to the government regulating fees. “SU’s management and Council have consistently held the position that these fees should be determined by each university’s council and not at the sectoral level,” the university told Daily Maverick.

Some have argued that fee increases are unnecessary since fewer resources are needed now that universities have shifted towards remote and online learning. But Bawa says this is incorrect:

“The cost of staffing is by far the biggest cost driver of the universities and this hasn’t changed. There are also significant costs associated with the shifting of learning to online learning, including the development, licensing and maintenance of the institutional cyberinfrastructure, technology platforms, the provision of devices and data, the need for staff development programmes, etc.”

Budget cuts for both universities and government was also a blow, with the state providing lower subsidies to institutions. DHET’s budget was cut by close to R10-billion.

Meanwhile, the South African Union of Students (SAUS) has rejected the fee hike. “We want a zero percent fee increase for the 2021 academic year because Covid-19 has already taken a lot from our people; worse still, students are already trapped in huge debts. Increasing fees is to put them in further debt,” the union said.

They have communicated their stance to the department and are “ready to take further action to ensure that no institution increases fees”.

“We will make the public aware of our next step regarding this matter after finalisation of consultations that are under way,” said SAUS. DM168