The ‘shadow pandemic’ of gender-based violence in Africa: From protocols to practice 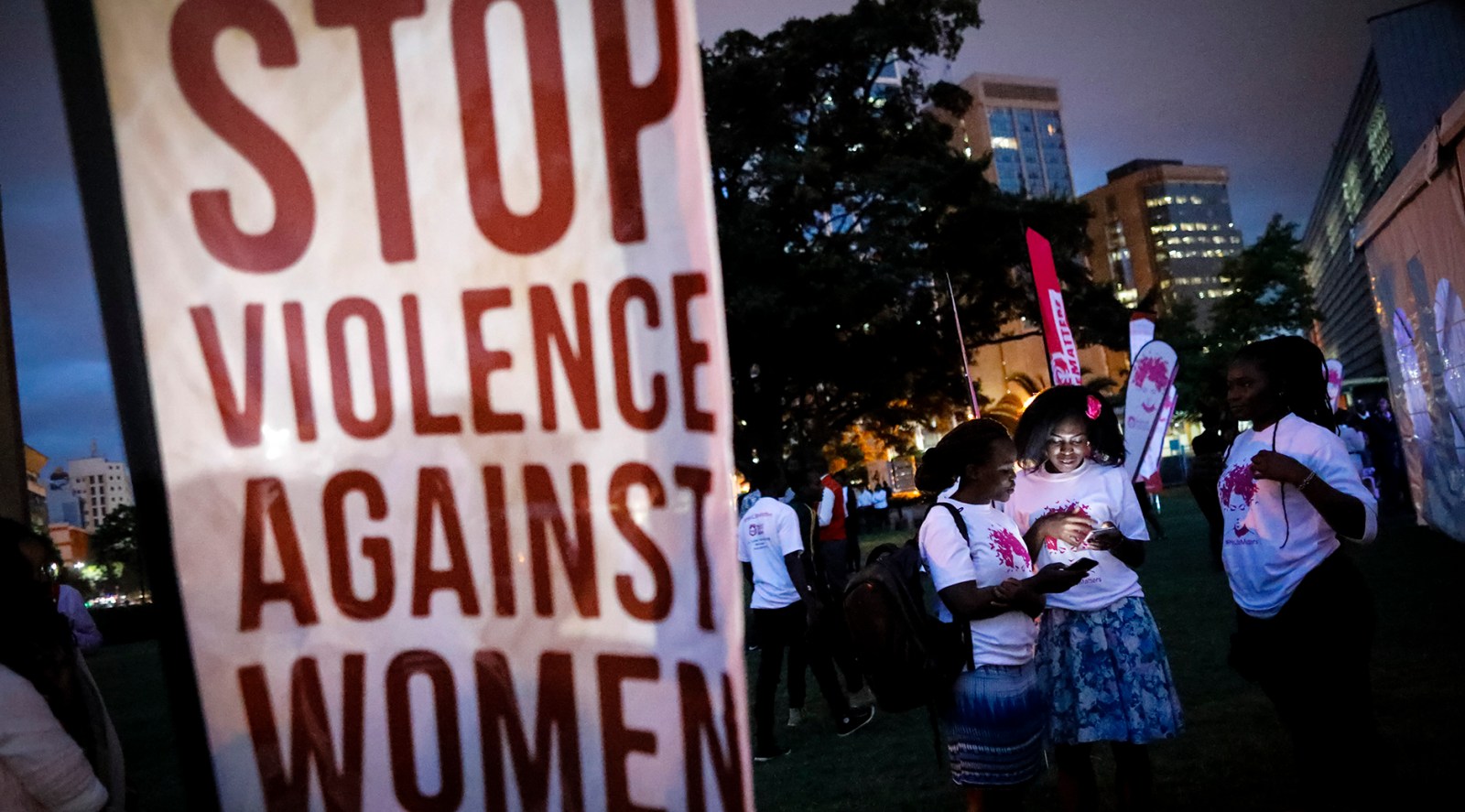 Kenyan women stand next to a banner as they attend a vigil for the victims of femicide in Nairobi, Kenya. (Photo: EPA-EFE / DAI KUROKAWA)

Since the initiation of lockdowns, a significant increase in gender-based violence has been noted in virtually all countries, including Namibia, Malawi, South Africa, Liberia, Nigeria and Kenya. Sadly, this has happened when social services, including health and shelter, are mainly channelled towards addressing Covid-19. Moreover, access to justice for victims of gender-based violence has been made more difficult as courts are not operating at full capacity.

As the world battles Covid-19, women and girls in Africa are fighting their own parallel battle that has been raging for ages: endemic gender-based violence (GBV).

Unfortunately (but as usual), commemorations of the 16 Days of Activism Against GBV happened amid reports, once again, of an alarming increase in violence against women. The United Nations has called it the “shadow pandemic”.

The United Nations Population Fund believes that violence against women and girls is perpetuated and maintained by the persistence of harmful gender norms, alcohol and drug abuse, and overall increased poverty. However, the Covid-19 pandemic and associated lockdown measures add an extra layer, placing victims of GBV in perpetual proximity to abusers and away from access to justice.

In this article, we highlight how, despite years of campaigns, agreements and ratifications of some of the best protocols on paper, the scourge is on the increase.

GBV in Africa: Cases and actions in selected countries

A random sample of some of the most publicised cases of GBV shows the extent to which this social vice is being “normalised”, but also how in some countries women are fighting back and states are being forced to respond.

Since early October 2020, hundreds of furious demonstrators – mainly younger women – have taken to the streets of Namibia’s capital, Windhoek, and social media using #ShutItAllDown in protest against GBV and femicide.

The protests were triggered by a series of gruesome assaults on women and girls, including the discovery of the body of a young woman who had gone missing in April 2020. Protesters demanded drastic action, including a state of emergency.

Violent police responses only fuelled the outrage and led to continued public protests across several regions and towns. The protesters vowed to keep protesting until substantial political action was taken to address femicide, rape and sexual abuse.

Yet in the midst of all this, on 25 November 2020, The Namibian Sun was to report that: “Police have just discovered the body of a woman who went missing at Omayanga village near Oshakati.”

Then, in December 2020, a 67-year-old man was arrested at Walvis Bay for allegedly raping his granddaughter. Erongo police crime investigations coordinator Erastus Iikuyu said the suspect “had sexual intercourse with the 13-year-old victim on numerous occasions … The suspect and the victim lived in the same house in Kuisebmond. The young victim had nowhere to run.”

It is estimated that 35% of women in Namibia have experienced violence at the hands of a man. This figure does not consider the number of cases of violence that go unreported. Citizens are outraged that authorities are not doing much to ensure that perpetrators face the full wrath of the law. Law enforcement agents, in particular, have been accused of victim-blaming, harassing and even arresting victims.

In Malawi, Pepeta Malawi, a branch of Pepeta Africa, says GBV has turned into a pandemic following the rise in cases of sexual violence against women and girls.

Vice-president Saulos Chilima has called on female lawyers to draft laws, which should spell out severe punishment for rapists to help reduce the rise in rape and cases of GBV. Malawi24 reported that the vice-president condemned some herbalists, saying they are fuelling rape by advising men to have sex with young girls or relatives as rituals to become rich.

GBV is one of the most widespread, persistent and devastating human rights violations in South Africa.

The country has one of the highest incidences of rape and domestic violence in the world. In 2019, the GBV-related deaths of three women: University of the Western Cape student Jesse Hess; local boxing champion Leighandre Jegels; and University of Cape Town student Uyinene Mrwetyana; made international headlines and spurred public protests across the country.

Scores of South African women marched to Parliament after Mrwetyana’s death to emphasise that enough was enough, putting issues of GBV and femicide in the spotlight. The #AmINext movement also went viral, trending on social media.

President Cyril Ramaphosa is reported to have allocated a budget specifically to deal with the issue, and initiated a national strategic plan aimed at eradicating GBV in the next five years.

In September, he announced that the country would tighten laws on GBV and sexual offences, starting with the amendment of the Criminal Law (Sexual Offences and Related Matters) Amendment Act.

From 25-29 November 2020, South Africa observed five national days of mourning to remember those who have lost their lives to Covid-19, GBV and femicide.

Despite these and other efforts, GBV persists in South Africa, and activists say women and girls remain unsafe, with almost 50% of assaults being committed by someone close to the victims, such as a friend, acquaintance, spouse or intimate partner.

In October, Police Minister Bheki Cele told Parliament that as many as 139 police officers had GBV charges hanging over their heads, at just 13 police stations across South Africa. He also provided a provincial breakdown of these cases, which included rape, statutory rape, murder, domestic violence, attempted murder, assault with intent to cause grievous bodily harm, contempt of court, malicious damage to property, intimidation and pointing a firearm.

Can there be hope for victims and survivors of GBV when those hired to protect and serve them have become the perpetrators?

The situation is no better in west Africa.

According to Al Jazeera, President George Weah declared rape a national emergency in the country on 11 September. The move came after widespread protests against rising incidents in the capital, Monrovia. President Weah also introduced the first set of new measures to address the increase in violence against women. The measures include designating a specific prosecutor to handle rape cases and setting up a national sex offender registry. He is also creating a national security task force to handle sexual and GBV, and is allocating $2-million to address the issue.

Similarly, Nigeria has long been facing a GBV crisis, with 30% of women and girls aged 15-49 having experienced sexual abuse. Increases in GBV during lockdowns threaten the lives and livelihoods of women and girls in Africa’s largest economy.

In recent months, two cases in particular – the arrest of 11 men for the rape of a 12-year-old girl, and the brutal rape and murder of a 22-year-old university student – fuelled a widespread call for action and sparked the Twitter hashtag #WeAreTired.

The Nigerian State of Kaduna recently introduced a law that allows for rapists of children under the age of 14 to be chemically castrated. Following popular protests, all state governors declared a state of emergency due to GBV.

Other forms of GBV common in Nigeria include child marriages, genital mutilation, and denying women and girls access to education, land and/or inheritance. According to the international NGO Girls Not Brides, 43% of girls in Nigeria are married off before their 18th birthday and 17% are married before they turn 15.

In the east African state of Kenya, local media reported almost 4,000 schoolgirls becoming pregnant when schools were closed during the lockdown. In most cases, relatives or police officers allegedly raped them.

A few months back, Human Rights Watch reported that one attacker in Kenya, who held captive and sexually assaulted a 16-year-old woman, allegedly claimed he kidnapped her because he “needed female company” to get through the government-imposed Covid-19 lockdown.

From policy frameworks to actionable initiatives: Breathing life into regional and international agreements

The Maputo Protocol, a legally binding instrument that has been ratified by 42 member states, has set a comprehensive set of women’s rights, with specific provisions on “Rights to Life, Integrity and Security of the Person”.

Many African states have signed and ratified the Convention on the Elimination of all Forms of Discrimination against Women, the Beijing Platform for Action and the SADC Protocol on Gender and Development.

However, the daily realities women and girls face as victims of GBV suggest a disconnect between officialdom and reality. To eliminate GBV and discrimination, robust approaches that target some of the socioeconomic and cultural factors that fuel this scourge are needed right through to grassroots levels.

It is time regional and international agreements translated into real change. Signatures and ratifications alone are never good enough, unless and until they are translated into actionable measures. DM/MC

The weekly roundup is a collaboration between the Southern Africa Human Rights Defenders Network and Maverick Citizen.