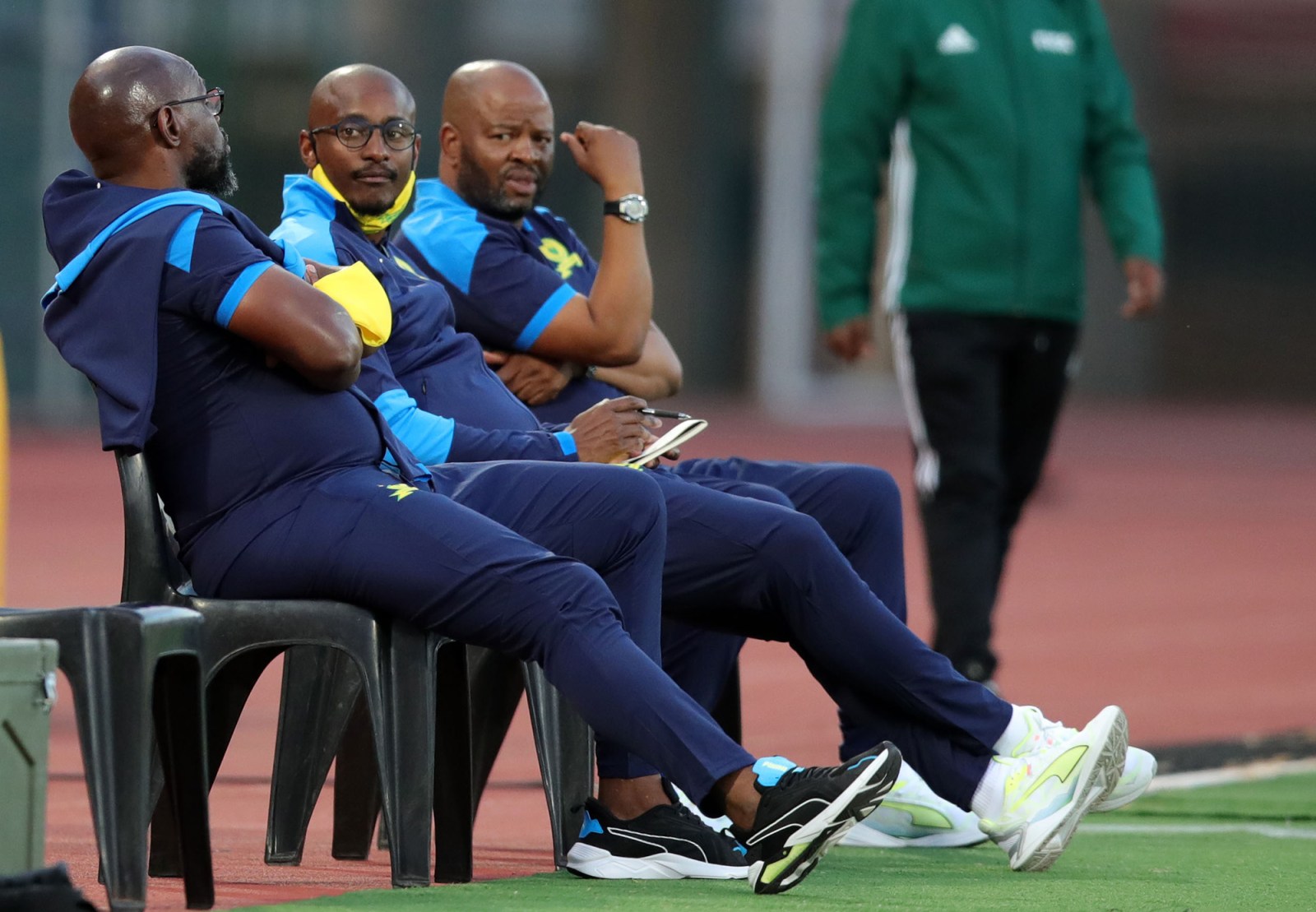 They may not be playing by the book, but whatever Mamelodi Sundowns is doing, it’s working.

Mamelodi Sundowns may have ripped up the conventional playbook after the departure of coach Pitso Mosimane, but they continue to dominate.

Professional sport these days pays such slavish devotion to its conventions that it is always pleasing when they are kicked into touch.

One such example is Mamelodi Sundowns, who have thrown conventional wisdom to the wolves this season, overcoming several potentially debilitating setbacks to continue their commanding role at the summit of the domestic game.

The death of two players within weeks in car crashes would have tested the resolve of the best of sides, made palpably worse by the Premier Soccer League insisting they keep playing.

But Sundowns have also had to deal with the departure of charismatic coach Mosimane and get the hang of a cumbersome-looking new management arrangement that seemed, on the surface, doomed to failure. It is proving anything but a miscarriage.

So much for the strictures of sport, all the theory of 10,000 hours of deliberate practice and the rest of the accepted norms for success.

Finding, and following, these formulas are at the heart of the sporting world’s modus operandi as obsession with perfecting all aspects of finer details characterises the approach of modern coaches and players.

But while it is the guide, it can never be the potion.

Football’s history is littered with the delicious bucking of custom. Denmark won the 1992 European Championship in the fairytale tradition of their land, just weeks after being invited to take the place of the war-torn and sanctions-affected Yugoslavia in the finals.

Not only did they have no pre-tournament preparation – “a bunch of fat vacation lads”, said goalkeeper Peter Schmeichel – but also had to do without star player Michael Laudrup, who had quit in a dispute with coach Richard Moller Nielsen.

The coach was famously remodelling his kitchen at home when the call came to play.

Closer to home, Cameroon went to the 1990 World Cup with a no-name Soviet coach, who could hardly communicate with his players and, via a pre-tournament camp in Yugoslavia, the sort “gift” African countries used to receive in the name of international solidarity in the days of the Non-Aligned Movement.

Their two goalkeepers, among the few professionals in the squad, had an almighty row and Cameroon eventually could not fix a single warm-up friendly. Yet they beat Argentina in the opening game and went on to become the first African country to get to the World Cup quarter-finals, charming fans across the globe in the process.

Sundowns’ story has none of that rags-to-riches element. Riches is what the club is all about and their ability to command the transfer market is the reason they dominate everything else.

Simply, money does buy football happiness, as we have learnt from examples over the decades, from Blackburn Rovers and AC Milan of the 1990s to Chelsea, Manchester City and Paris St Germain more recently.

But what has been remarkable – and against the conventional grain – has been how Sundowns have dealt with the blows they have received, any of which could have been knockout punches.

Anele Ngcongca was a popular squad member, on his way out to AmaZulu, while Motjeka Madisha had established himself as a starting line-up regular and was beginning to blossom in his international career too.

Their deaths were both tragic and needless as well as a huge blow to their teammates, yet they were granted no time to grieve or pay proper tribute.

Mosimane’s departure for Cairo was swift and also telling. He obviously needed a new challenge but his powerful grip on club matters meant his departure was always going to leave a massive personality gap.

No decisions of any consequence were made at the club without the coach’s say-so, particularly on matters of playing personnel.

The speed at which he accepted the offer to go to Al Ahly caught Sundowns napping. Without any succession plan in place, owner Patrice Motsepe’s reaction was to raise the status of Mosimane’s two lieutenants and make them co-coaches, although the press release announcing Manqoba Mngqithi and Rhulani Mokwena as the new bosses did specifically say “the opinion of Mngqithi would prevail when there isn’t consensus”.

To add to the congestion in the kitchen, just seven days later Steve Komphela arrived from Lamontville Golden Arrows in a bizarre appointment on the surface, leaving a vastly experienced and well-regarded head coach to be an assistant to the top duo.

Sundowns could hardly anoint the former Bafana Bafana and Kaizer Chiefs coach as a deputy so are calling him the “senior coach”, but three cooks stirring the broth looked a sure-fire recipe for disaster.

Yet, a third of the way through the season, Sundowns are unbeaten in the league, top of the table and playing some convincing football. They also look a cut above the rest of the chasing pack, and it is hard to envisage anything but another successful championship run for them.

The 24 points garnered from their opening 10 league games is a better start than Mosimane was able to achieve in his seven full seasons at the club. The most he managed was 22 in his first full campaign in 2013-14 and again when they lost the league title to Bidvest Wits in 2016-17.

The triumvirate of coaches are working well with each other too, underscored by a secret pact to prove the doubters wrong.

Squabbling egos and an inevitable implosion is just what the public would expect in such a situation and so Mngqithi, Mokwena and Komphela are going out of their way to make their arrangement work.

There is also a genuine admiration for each other’s abilities, club insiders tell DM168, and respect fostered from previous relationships. Mokwena first worked under Komphela at Platinum Stars a decade ago.

The ghost of Mosimane still hangs heavily overhead. His appointment in Egypt was a breakthrough for ambitious black African coaches, of whom the Sundowns three are strong examples. All three are fanatical students of the game, on top of the latest trends, assiduously analysing and eager to embrace new ideas. They are also conscious of the need to continue Mosimane’s success, and thereby break down further doors.

But there has also been a break with Mosimane’s approach, tactics and personnel – some would say a risky but quietly expressed statement of independence by the new management. There’s almost a silent revolution under way at Sundowns.

More players (28) have been used in this campaign than Mosimane would ordinarily have fielded in an entire season. It is, of course, also a function of having so many talented squad members at their disposal, and the number of new signings that came into the club at the start of this campaign.

Admittedly, there is still much of the season to come and Sundowns will be distracted by yet another African Champions League group campaign, which kicks off next month. But it is hard to see anything other than continued success for the club. DM168