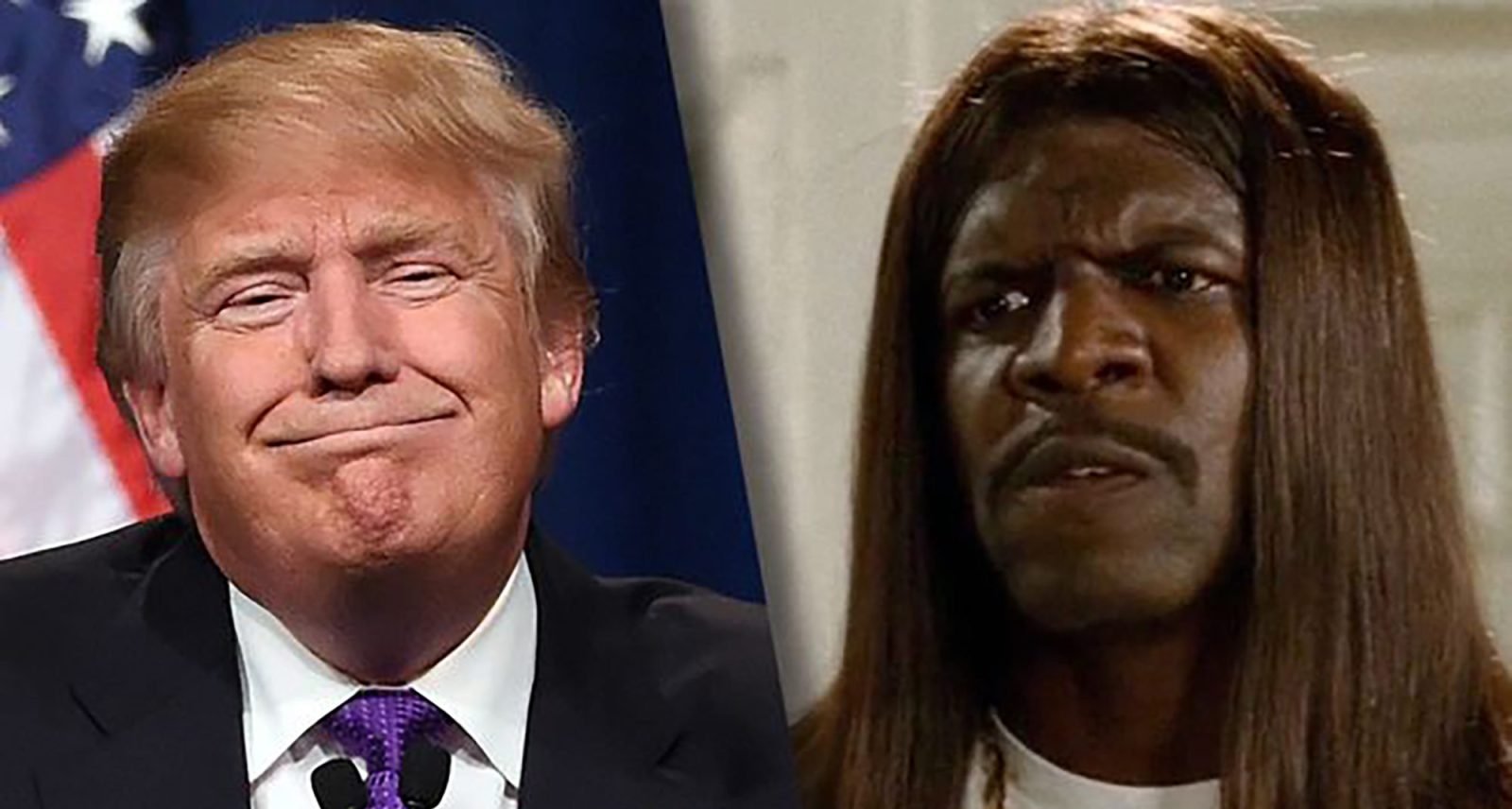 US President Donald Trump EPA) and Terry Crews as President Camacho in Idiocracy.

How did the “most successful and richest nation in history” manage to produce millions of desperados, misfits and outlaws who are now on a major collision course with their own government?

It was created by the man who has also gifted our long-suffering civilisation such subtle and dignified characters as Beavis & Butt-Head, as well as the uber-geek sort of comedy but now legendary Office Space.

Never was Mike Judge as brilliant though as he was in his 2006 lowbrow masterpiece, Idiocracy.

Co-written with Ethan Cohen and directed by Judge, Idiocracy was low on budget and comically bad in the effects department. The outdoor scenes were sometimes so badly done that it verged on the ridiculous – Judge might as well have hung up a sign saying “Imagine an entire city devastated by centuries of stupidity and incompetence here” and the effect would have been the same from the production values point of view.

And yet, it was funny, and cutting, and now feels disturbingly prophetic.

The movie follows a path that transports the two main characters, a “most average man in the US army” and a DC prostitute (*Luke Wilson and Maya Rudolph) 500 years into the US future. Imagine the entire United States as an enlarged set for The Jerry Springer Show (Trump was still only a mildly successful reality TV star and a failed real estate developer in those days), and you get the theatre for Idiocracy in 2505, where stupidity/moronity is the norm, where humour is focused on bodily fluids and gases, and the entire economy grinds to a halt when they run out of French fries and burrito covers. And yes, everyone wears Crocs, because, “You’d have to be an idiot to wear these!”, in Judge’s words.

In this vision of a dystopian future, the US is controlled by massive corporations, such as a mythical Brawndo (The Thirst Mutilator – because it has electrolytes), while the real-world brands like Starbucks and Carl’s Jr bundle sexual services with their lattes and burgers. (In an act of supreme irony, Carl’s Jr CEO Andrew Puzder was Trump’s original choice for Labour Secretary.) Their slogans have been masterfully transformed to satisfy a world in which our worst swear words sound like nursery rhymes. And, God, they’re funny!

In 2505, everyone in America is a complete idiot. And I mean, everyone.

I shall stop spoiling the movie here – you should do yourself a favour and watch it.

Idiocracy’s cheeky treatment of the big brands created a backlash, and the movie distributor, Fox, was not enamoured with the way Fox News was presented (very funny though). So they killed the movie in the theatres, while it still ultimately turned profitable by earning $9-million on DVD release.

In the early days, it was harmless fun to watch Idiocracy, as it was just too far-fetched. Not many could have foreseen the rise of Sarah Palin, the Tea Party and then the arrival of Voldemort himself, one Donald J Trump.

In 2007, I asked my friend and collaborator Kevin Bloom to write a review of Idiocracy for our media and culture magazine, Empire. Later, every time the GOP would make election inroads (2010 and 2014), I would re-run Bloom’s review, just for fun.

But then, in 2015, Trump arrived, and suddenly there was no distance between the picture of masses attending his rallies and the stills of the moronic masses depicted in Idiocracy. The same crude language, the same haze in the eyes, the same “I like money, we should hang out.” (Cohen himself said that he didn’t expect the movie to become a documentary by 2015.)

With Trump’s ascent, this was not a joke anymore. Idiocracy has arrived, some 490 years too early.

Idiocracy: A Gospel for the New Aeon

The world’s superpower is now reeling after four years of being controlled by idiots, enabled by their incompetent lackeys, who now threaten to annihilate the country for having the temerity to vote for Biden. Trump’s second impeachment is rocket fuel to their already considerable fire, stoked by right-wing propaganda and ridiculously imaginative QAnon conspiracy theories. Someone just needs to light a match and these real-life Idiocracy extras would love to burn everything, for free.

How did America get here? How did the “most successful and richest nation in history” manage to produce millions of desperados, misfits and outlaws who are now on a major collision course with their own government?

And how is it possible that the word “patriot” now applies to a bunch of gung-ho yahoos who dream about shooting all day long and cling to the US Constitution that they are often too illiterate to read and too vacuous to understand? Their use for the Bible is limited to helping fortify their racism and homophobia, their desire is to burn.

The answers, my friends, to all these questions are there for all to see. Just watch Idiocracy. And be afraid. DM168