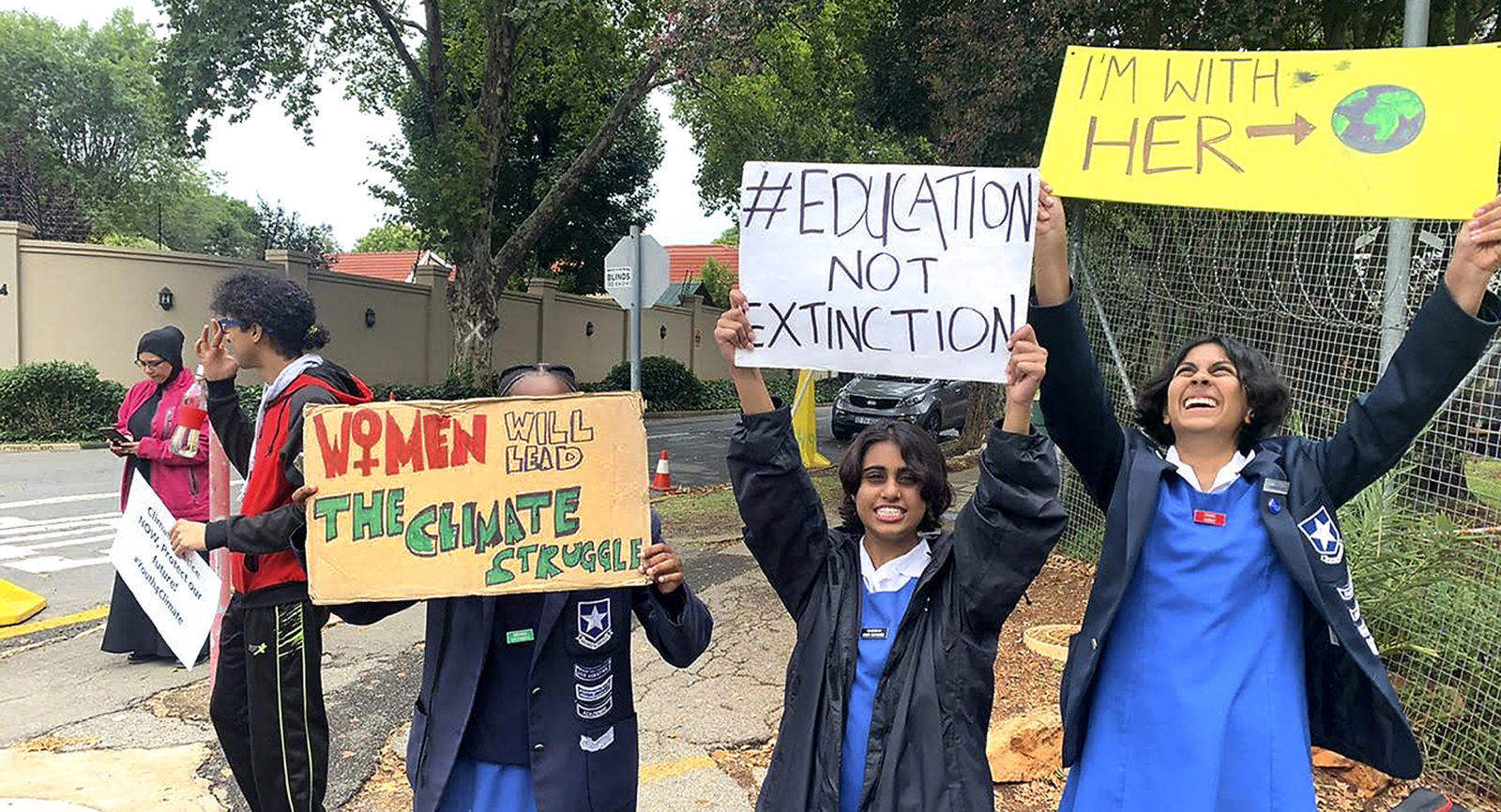 Munnira Katongole, Raeesah Noor-Mahomed and Zahra Sader were ecstatic to be joined by supporters in their second week. (Photo: Sunny Morgan)

Daily Maverick’s Our Burning Planet and Maverick Citizen are partnering with the Climate Justice Charter Movement to report on issues central to our survival – the climate crisis and people’s democratic alternatives. This article is part of the series and focuses on the challenges young people face as they try to organise to raise awareness and catalyse action on the climate crisis.

As we face the realities of the climate crisis, the effects of which increase daily, the future looks bleak. Youth from all over the world are uncertain, we are scared of what our futures hold. Even scarier is the not-so-ridiculous possibility that we won’t have a future at all. However, the greatest horror is how world leaders have reacted to the climate crisis.

The science is clear and the facts are available in abundance. Their ignorance and apathy is deliberate.

In January 2020, my matric year, I began to boycott school every Friday, demanding that the South African government and the Department of Environmental Affairs declare a climate emergency. I sat outside the school gates, alone on the first day, in a desperate attempt to force them to listen.

This was around the time of the Australian fires, the effects of which were intense. I encountered posts and articles about how the fires had a large impact on the Australian economy and I began to wonder how, if a country like Australia was strained by the fires, South Africa would be able to cope with such a disaster. In Grade 11 Geography I learnt that some parts of South Africa are prone to veld fires.

Because of colonialism and apartheid the people who would be most affected are poor BIPOC (black, indigenous people of colour). How could the government not care about its people? If a climate disaster occurred the economy would crumble. Surely that would worry the government. Right?

I could not understand it. I could not understand how adults and professionals could be so apathetic to the realities and horrors of the climate crisis if I, a 17-year-old who hadn’t even finished school, could see how serious it is. The science is readily available. If people in power weren’t addressing it I came to the conclusion that they just didn’t care.

So much has changed in the space of one year. My school boycott feels a universe away. After that first day I was never alone.

The next Friday I was joined by my friends Zahra Sader and Munnira Katongole who were in grades 10 and 11 in my school and Jacob Gordon, a Grade 9 student from a different school. It rained the whole day. We stood for the whole six hours and I never knew how much your knees hurt when you stand so long.

Our friend Anita from Extinction Rebellion left us her umbrella. She was there every week with her camera. Sunny Morgan (Uncle Sunny to us) brought us camp chairs and a large umbrella to shade us from the sun. A sweet old couple stopped by a few times, bringing tea and homemade biscuits and, once, their four dogs.

Friends from Extinction Rebellion always stopped by and Courtney Morgan and Jane Cherry from COPAC walked from their office every Friday to come to see us. During a terrible storm Candice Chirwa and Emil Lars, my mentors and dear friends, were there to give us shelter in the car. My mother came, my father checked on us every week and even my grandmother came to see us once.

We were never alone. There were so many people who cared. I didn’t realise how much that human connection would mean in the months that followed.

I wrote a letter to President Ramaphosa, which he never responded to. Later in the year, we were able to meet Minister Barbara Creecy, the Minister of Environmental Affairs, at a Youth Dialogue. I couldn’t sleep the night before and by the time we got there I was shaking with sleep deprivation and anxiety.

At first it seemed promising. The room was filled with so many young people and we all had three minutes to voice our concerns, anger and suggestions while the minister took notes. She then gave her speech, essentially telling us what we had just told her. At least if she knew how serious climate change is and that it would disproportionately affect marginalised communities she would do something about it, right?

I was sorely mistaken.

After telling us why climate change is bad, it was time to tell us what the department is planning to do about it. What we need is a complete system change and complete commitment from people in power to make the changes that need to be made. What we were told is that “it is the youth’s job to change public perception” and that we “need to make changes in our own communities”.

Her message was clear. If the youth wanted anything to be done about the climate crisis we had to do it ourselves. In telling us that it is our job to change public perception and make changes in our own communities the blame is shifted to ordinary people instead of the industries, companies and lack of proper governmental direction that are actually the problem.

Notwithstanding that it is essential for the general public to make their own lifestyle changes, it needs to be done while governments and industries make their own massive changes. The implication that ordinary people need to change the world is a product of exclusionary mentality, aimed only at the middle class and completely leaving the majority of the population out by disregarding the problems they face.

In South Africa a massive portion of the population is impoverished. They do not contribute to the climate crisis and will be the most affected, yet they are expected to solve it.

I was outraged, drumming my fingers on my cold drink can and visibly shaking with anger and disbelief. Any small glimpse of optimism had been erased. I realised the Youth Dialogue was just a way for the department to placate us and keep us quiet for the next few months. There was no evidence that demonstrated any intention to make significant changes.

In hindsight, intersectionality seems so obvious. Of course everything is linked. Of course no issue exists in isolation. Once you realise it, it becomes so obvious and clear that it is frustrating that not enough people see it. Hindsight is always clear. It is easy to forget the fog one has to navigate through to reach it.

I remember being told what I can do to save water by Manzi, a giant dancing tap, on an excursion to Rand Water in Grade 2. Close the tap when brushing your teeth, shower not bath, water the garden with shower water. We were told the same things in high school.

Nobody told us that the real cause of the climate crisis is capitalism and harmful industries, or that the largest polluters were in the West, profiteering off resources stolen from Africa. We were just told that we have to stop it.

Just a few weeks before anyone realised the severity of the Covid-19 pandemic three of us had a small protest in the Maboneng Precinct. We walked around with plastic bottles over our noses and mouths acting as gas marks, with posters saying that climate change will be the next pandemic (irony?).

We engaged with street vendors and pedestrians. They knew the severity of the climate crisis. One lady showed us that she had made the earrings she was selling from recycled plastic. They commended us for what we were doing but their responses were the same: “The government won’t do anything. They don’t care.”

To tell the youth that it is our job to change public perception is misleading. People know about the climate crisis. People care.

The fact of the matter is that the current system is rooted in colonialism, racism and oppression. The solutions we receive in mainstream media come from the West. They don’t acknowledge the history of oppression that led to this point.

The solutions we hear are mainly for the environment. But in a world with so much inequality, in a country where people are still suffering from the legacy of colonisation and apartheid and the current institutionalised corruption, the solutions cannot only be made to save our futures. The entire system needs to change.

Change needs to be driven from a grassroots level by giving people the tools to change things themselves instead of having governments and organisations deciding on their behalf. We need to put people before profit. Fossil fuel companies need to be taxed and the money needs to go towards ensuring that every person’s rights are met.

We know what needs to be done. We have the solutions. But the chances of those solutions being implemented are slim. We, the youth, know what future we are fighting for. It is terrifying that our future rests in the hands of leaders and politicians who will do everything they can to retain their power.

Raeesah Noor-Mahomed is an 18-year-old intersectional activist. In 2020, their matric year, they led a school boycott to demand that the Department of Environmental Affairs declare a climate emergency and have since been working to decolonise, connect to activists around Africa and make their activism more inclusive and accessible with the organisations Stage For Change and 65 Years.