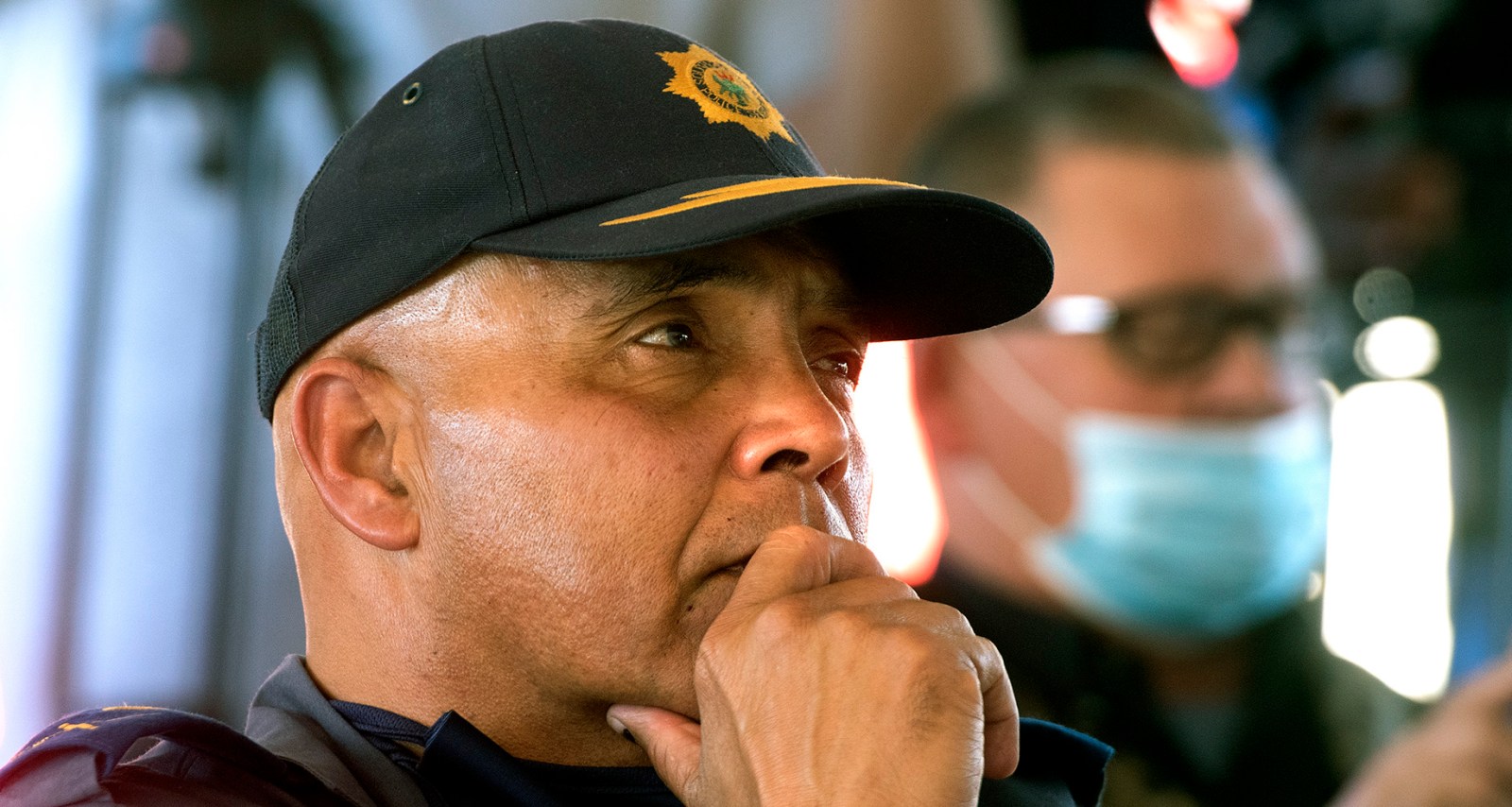 Western Cape Anti-Gang Unit head Major-General André Lincoln is facing disciplinary action over events surrounding the assassination of Lieutenant-Colonel Charl Kinnear. This has led to hard questions being asked about the extent to which tentacles of underworld figures could be reaching into SAPS ranks.

The disciplinary action instituted against Anti-Gang Unit (AGU) head Major-General André Lincoln for purportedly failing to provide adequate protection at the home of Lieutenant-Colonel Charl Kinnear two weeks prior to his murder, can be construed as an attempt to divert attention from the bigger picture.

This view was echoed by AGU-members and by Nicolette Kinnear, the widow of Charl Kinnear who was gunned down at about 3pm on Friday 18 September 2020 in front of his house in Gearing Street, Bishop Lavis.

Explaining the bigger picture, three  AGU members, who requested anonymity, raised a number of questions with Daily Maverick: Most importantly, they asked, who is the gunman that killed Kinnear, who orchestrated the hit and why aren’t they arrested?

The AGU members also pointed out that the gun-licence racket case in Johannesburg investigated by Kinnear led to the arrest of 20 police officers who allegedly colluded with underworld figure Nafiz Modack. They are facing charges of fraud, defeating the ends of justice and the contravention of the Firearms Control Act 60 of 2000 relating to multiple dockets in Edendale, Kempton Park and Northwood.

Together, they felt that with Kinnear out of the way, the immediate target was Lincoln. They felt that the aim was to discredit Lincoln and in so doing discredit the reputation of the AGU which could possibly be used to plant a seed of doubt in the gun-racket matter.

The only person so far behind bars in connection with the murder of Kinnear is Zane Kilian, who was apprehended on 23 September 2020 shortly after midnight in Springs. This after an investigation by a cellular and data company which carried out a location-based station (LBS) tracking of cellular devices, was able to locate Kilian in Springs. Investigators then established that Kilian had pinged Kinnear’s phone 2,400 times until the day he was assassinated. 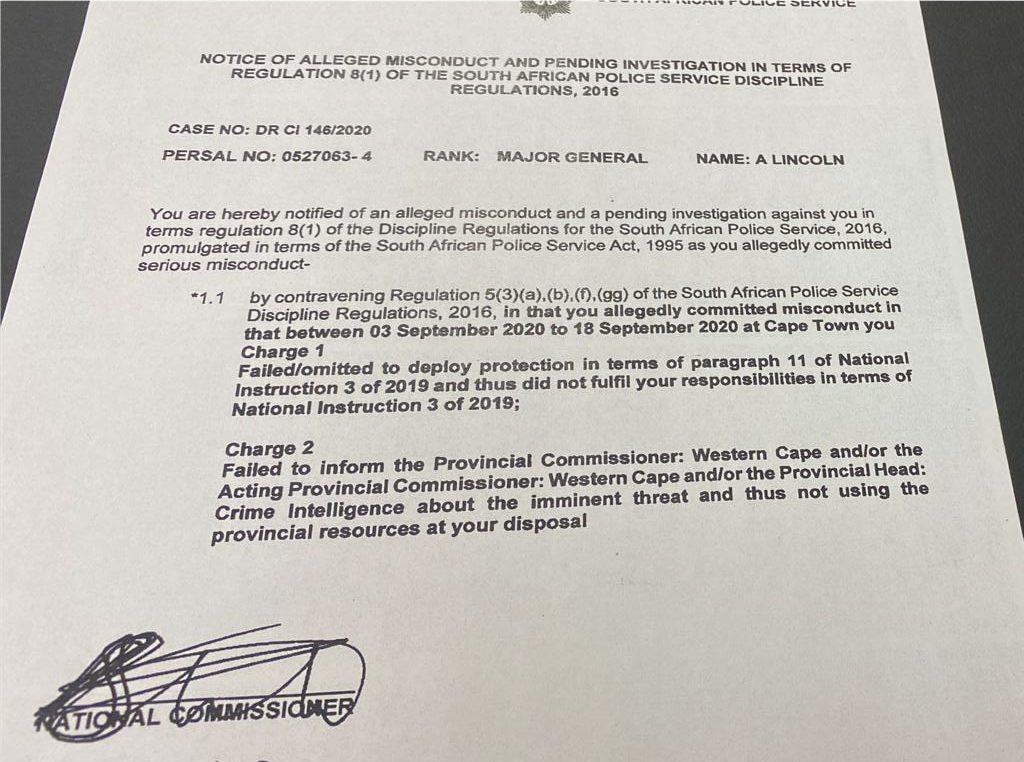 The charge sheet against Lincoln (see above) reads “you are hereby notified of an alleged misconduct and a pending investigation against you in terms of regulation 8(1) of the Discipline Regulations for the South African Police Service, 2016, promulgated in terms of the South African Police Service Act, 1995 as you allegedly committed serious misconduct.”

The charges he faces relate to the contravention of Regulation 5(3).(b).(f).(gg) of the South African Police Services Discipline Regulations, 2016, in that he allegedly committed misconduct in that between 3 September 2020 to 18 September 2020 at Cape Town he “failed/omitted to deploy protection in terms of paragraph 11 of National Instructions 3 of 2019 and secondly failed to inform the Provincial Commissioner of the Western Cape and or the Acting Provincial Commissioner of the Western Cape and or Provincial Head Crime Intelligence about the imminent threat and thus not using the provincial resources at your disposal.”

Let’s go back to 5 September 2020 and look at where Kinnear was at that particular moment. On the day in question, Kinnear and a female colleague, whose phone was also pinged, were following up leads in Springs relating to the gun-licence racket at Norwood Police Station.

Kinnear visited a colleague in Gauteng, who had also received death threats, where they discussed the threats on Kinnear’s life. Kinnear’s last words to his colleague were “take care and please be safe”.

Kinnear’s widow has already said on record that “I was aware that both my husband and my cell phone were pinged. On 6 September, two weeks before Charl’s murder, a report on the pinging of our phones was drawn up and handed to the Hawks and Crime Intelligence.

“On 16 September 2020, the report indicated an increase in pinging and AGU head André Lincoln phoned Charl to find out where he was and told my husband his phone was pinged again. Luckily my husband was at home on that day.”

In terms of SAPS regulations relating to the safety of officers emanating from a threat, a threat analysis assessment needs to be carried out by crime intelligence. They then had to inform Lincoln to arrange the necessary protection arrangement.

“My husband was meticulous and kept a diary of everything and I am aware that in March 2020 he had an hour-and-30 minutes meeting with Crime Intelligence.”

So if no threat analysis was carried out, it begs the question of whether SAPS has a leg to stand on in its disciplinary case against Lincoln.

Revisiting the events that unfolded on 18 September, Maverick Citizen revealed the pinging of Kinnear’s phone started at about 2.30am. The question is, was crime intelligence aware, and, if so, why didn’t they activate a response team immediately?

At 1pm, two hours before the assassination, Kinnear’s phone was pinged at regular intervals and at 2.30pm the pinging increased to every three minutes until the fatal shot was delivered at about 3pm. The pinging carried out for a further 25 minutes to make sure the target was taken out. Up to that very minute, Kinnear’s phone was pinged 2,400 times.

With this vitally important information at the disposal of SAPS, surely crime intelligence and someone in Western Cape police management must come up with some explanation as to who in the chain of command apparently failed to act expeditiously? Furthermore, a response of this magnitude requires a chain of command and surely not simply one person — in this case, Lincoln.

Maverick Citizen investigations further reveal that based on the information investigators gathered from residents about the hoodie- and cap-wearing gunman who left the scene, they were able to identify a possible suspect.

“The number of the gang who allegedly carried out the hit was determined. Preliminary information showed it was a member of the Disciples gang, but till today a suspect wasn’t taken in for questioning and is still roaming the streets,” AGU members said.

The AGU members warned that the internal fight among SAPS’ top brass spells danger, adding that Lincoln won’t be the last top officer to face disciplinary action. The feeling among AGU members and top detectives in the province is that “underworld figures are calling the shots within SAPS because of the wide-scale corruption and police members allegedly on the payroll of underworld figures.”

Reacting to an enquiry, national police spokesperson Brigadier Vish Naidoo said, “we never confirm or deny investigations against any individuals, be it public servants or private individuals.” MC/DM