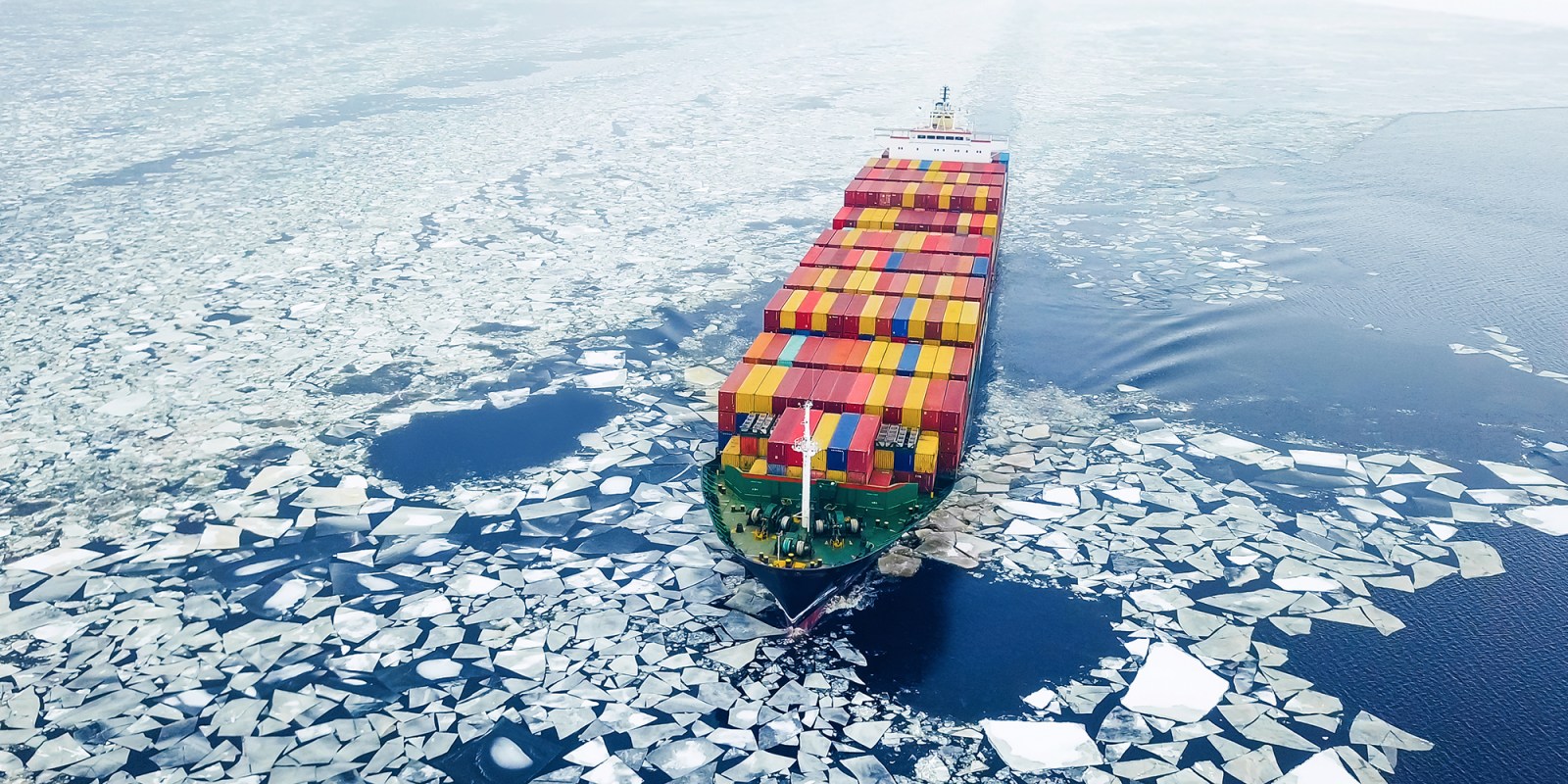 For years a bleak island chain sandwiched between the Laptev and East Siberian seas off Russia’s Arctic coast has been viewed as one of the most difficult-to-reach places in the northern hemisphere. If it has been viewed at all.

With winter temperatures habitually plunging to -30oC or lower, it is also one of the more inhospitable tracts on the Northern Sea Route.

Now, as world attention is consumed by developments in the US, Daily Maverick/Our Burning Planet can confirm that an event with repercussions likely to echo down the generations quietly took place elsewhere, in the heart of this seemingly forgotten corner of Planet Earth.

According to GPS data on global ship tracker Marinetraffic.com, two liquefied natural gas (LNG) carriers passed each other at the New Siberian Islands on the night of 11 January around 9pm GMT; or on the morning of 12 January in the local time zone, Yakutsk Time.

This marks the first time that ice-class tankers are sailing opposing but parallel voyages along the Northern Sea Route in the dead of the frigid Arctic winter.

Owned by Sovcomflot, Russia’s largest shipping company, LNG carrier Christophe de Margerie had on 5 January departed Sabetta in northwest Siberia, a once-pristine and isolated wilderness that holds vast natural gas reserves. Her course? Travelling east through the Long Dark Night towards Dalian, a port city in northeast China. In turn, the gas tanker Nikolay Zubov had departed Dalian on Christmas Day, bound, instead, in the opposite direction towards Sabetta’s vast LNG port.

The meeting, and passing, of these ships at Far North — entirely without ice-breaking help — mark a watershed moment in Arctic as well as climate politics.

And so far, the parallel voyages are doing more than just helping to show that this region — up to now largely impassable in winter due to thick ice — is melting at record speed.

These and other experimental shipments, a joint venture between the Russian gas and shipping industries and state nuclear energy corporation Rosatom, are also showing that the Northern Sea Route is now increasingly likely to be passable year-round. If anything in the geopolitical sense, the voyages are a demonstration of the Kremlin’s ambitions to transform the Northern Sea Route into a shipping superhighway and flood Asia-Pacific ports with LNG.

The Christophe de Margerie had also crossed the Northern Sea Route last year in May, revealing that this passage was now fully open in summer.

Accompanied by the nuclear-powered icebreaker Yamal, she took 12 days to complete the voyage, covering 2,563 nautical miles from Sabetta to Cape Dezhnev, the Eurasian landmass’s easternmost point.

“This successful voyage … allows us to move one step closer to realising the full transit potential of the Northern Sea Route, marking an important expansion in the shipping opportunities available to Arctic industrial projects in particular,” Sovcomflot president Igor Tonkovidov said.

He added: “Even in the challenging ice conditions encountered during this time of the year, choosing the Northern Sea Route allows for a significant reduction in the length of a voyage delivering LNG to [Asia-Pacific] ports compared with using the Suez Canal.”

Arctic daily news site Independent Barents Observer noted that, by 2024, the Kremlin wants to have ramped up cargo volumes on the route by 80 million tons and a “further 130 million tons by 2035”. To date, reports the Observer, the “lion’s share of the goods is LNG”.

Demand for natural gas is partly driven by the fossil fuel’s reputation as the least damaging among its kind – it emits about 50% less carbon dioxide than coal when burnt.

Even so, it is neither a renewable form of energy nor, in the case of Sabetta port stationed on the eastern edge of the Yamal wilderness, without environmental concerns. To open the basin in the 1,000km-long Gulf of Ob and construct the LNG terminal, a dredging fleet has targeted some tens of millions in cubic meters of frozen permafrost. The fleet reportedly includes ships despatched from Belgium, the Netherlands and Germany.

The UN Convention on Biological Diversity lists this gulf as an “EBSA” – an ecologically or biologically significant area.

The largest estuary in the Russian Arctic, “the continental outflow here is the greatest recorded in the Arctic seas”.

It supports large stocks of freshwater fishes, aquatic birds and waterfowl, the Convention’s “clearing-house mechanism” reports, and it is also an “important spawning area for the polar cod. The coastal zone of the area is characterised by exceptionally high biological and landscape diversity as well as a range of aquatic bird species.”

These include globally threatened birds like Steller’s eider (Polysticta stelleri), velvet scoter (Melanitta fusca) and long-tailed duck (Clangula hyemalis), which “breed in tundra but make extensive use of coastal waters during the non-breeding period. The estuary also provides moulting and feeding habitats for sea ducks, geese and swans, including dark-bellied Brent goose (Branta bernicla) and Bewick’s swan (Cygnus columbianus). The area is an important summer feeding ground for beluga whales, and polar bears occur in the outer part of it.”

‘Incalculable repercussions for our climate’

The warmer conditions turning Vladimir Putin’s fantasy into a fast-tracked reality are also a warning, scientists have said, of a climate under siege from fossil fuels. This, despite greenhouse-gas savings that may have been achieved during the pandemic.

In October, the €150-million MOSAiC expedition, led by the German icebreaker Polarstern, wrapped up the largest climate polar research mission in history after a year floating in and out of Arctic ice. Hosting some 440 researchers from nearly 40 countries, the expedition sketched dire predictions without drastic interventions.

“We’ve seen how the Arctic ice is dying. In the summer, even at the North Pole, it was characterised by extensive melting and erosion. If we don’t make immediate and sweeping efforts to combat climate warming, we’ll soon see ice-free Arctic summers, which will have incalculable repercussions for our own weather and climate,” expedition leader Professor Markus Rex said.

“The winter temperatures we encountered were nearly always 10 degrees warmer than what [Norwegian explorer] Fridtjof Nansen experienced on his ground-breaking Arctic expedition over 125 years ago … We should do everything within our power to preserve it for future generations.”

Similarly, data released this week by the EU’s Copernicus Climate Change Service shows that globally 2020 tied with 2016 as the warmest years yet recorded, “marking the end of the warmest decade on record, while CO2 concentrations continue to rise”.

Have an ice day, Murica, from the Russia with love

Meanwhile, the Kremlin is forging ahead with Putin’s Arctic masterplan.

The present flagship vessel in Russia’s growing fleet of heavy-duty nuclear-powered icebreakers is the new-generation Arktika, now officially the most powerful ocean-going vessel of her kind. She completed her first working voyage in November, said state-fleet operator Rosatomflot.

None of these vessels, however, will be a match for “the most powerful atomic-driven ship in the history of the world shipbuilding” – as the state’s shipyard describes her – due to become operational in 2027.

Perhaps not unsurprisingly, this one will be called the Russia.

As a nuclear-powered icebreaker, the 210m-long vessel will be able to stay at sea for eight months without entering a port, fortified by engine capability that will allow her to “operate autonomously for long periods without the need for frequent refuelling”, state media says.

It might be fair to say that the Kremlin and its state collaborators have a head start in this game – one that its neighbour on the other side of the Bering Strait alludes to in its own new strategic blueprint for the Arctic region, released on January 5.

Like Putin’s Russia, the US Navy’s A Blue Arctic report appears to accept the transformation of “rapidly melting sea ice” into “navigable Arctic waters” as a fait accompli.

Hence, the “Blue Arctic” of the report’s title – and a US naval department intent on heeding the “challenges and opportunities” of the region, as much as it seems keen to define itself in opposition to Russia and China, another growing polar power.

“Without sustained American naval presence and partnerships in the Arctic region,” says the report, “peace and prosperity will be increasingly challenged by Russia and China, whose interests and values differ dramatically from ours.”

The Christophe de Margerie is set to call at Dalian on 26 January, while the Nikolay Zubov is expected to make landfall at Sabetta on 16 January.

The news may not have rocked world headlines. If one thing is certain, however, other Arctic powers and their allies are – or should be – making notes. DM/OBP